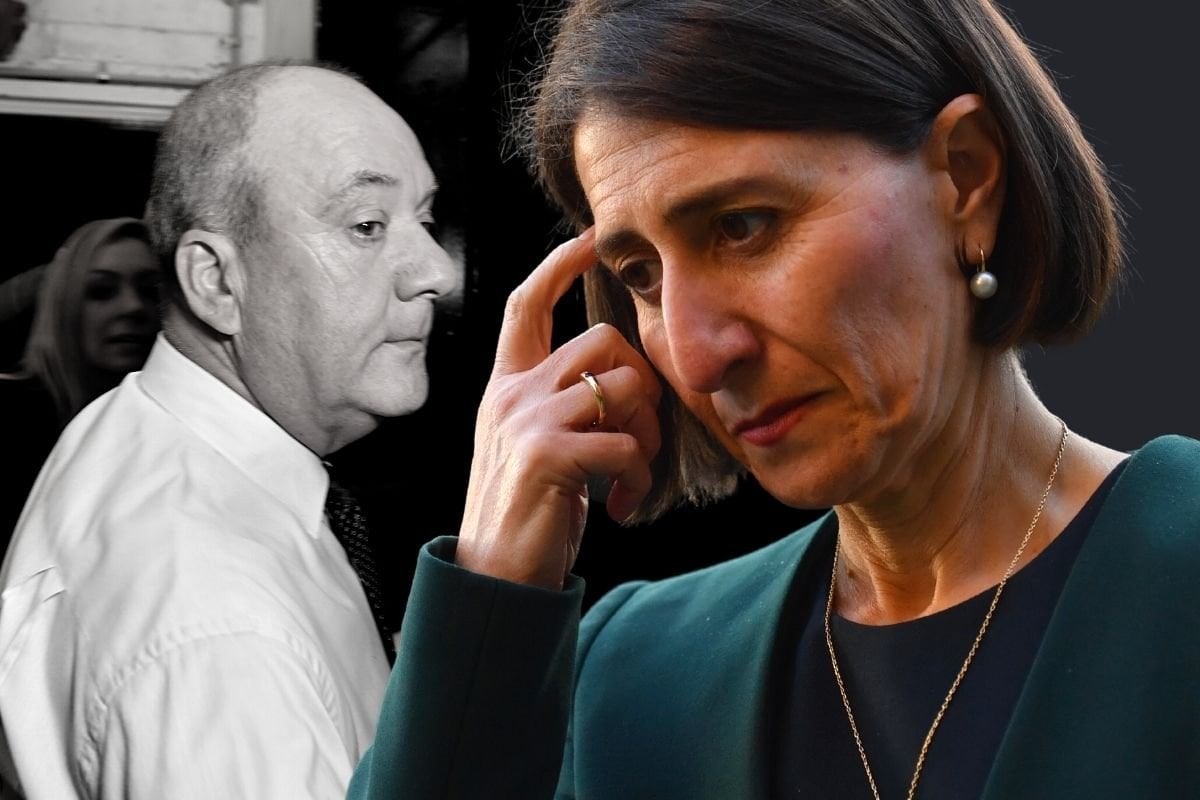 Since being elected Premier of NSW in 2017, Gladys Berejiklian has led the state through one of the most tumultuous and disaster-riddled periods in its history. There was the devastating drought declared in 2018, the Black Summer bushfires that followed, and now the COVID-19 pandemic.

But ultimately, it was a political crisis that brought the veteran politician undone.

After close to two decades in NSW Parliament, Berejiklian announced her resignation on Friday afternoon. With the state still in the grips of its deadly Delta outbreak and just weeks away from a planned easing of public health restrictions, it was a move that — in Berejiklian's own words — "could not happen at a worse time".

"Resigning at this time is against every instinct in my being and something which I do not want to do," she told gathered media. "I love my job and serving the community, but I have been given no option following the statement issued."

Watch: Gladys Berejiklian resigns as Premier and Member for Willoughby. Post continues below.

The statement she was referring to was released earlier on Friday by the Independent Commission Against Corruption (ICAC). In it, the watchdog announced it will conduct an investigation into whether Berejiklian was in a position of "conflict between her public duties and private interest" when she was in a relationship with former Liberal MP Daryl Maguire.

So how did we get here? And what happens next? Let's take a took.

What exactly is ICAC investigating?

ICAC is an independent body that serves to investigate allegations of corruption in the NSW public sector.

Its forthcoming investigation into Berejiklian — which is due to begin on October 18 and span roughly 10 days — aims to determine whether she breached public trust when she awarded grants to several community organisations in the NSW Riverina region between 2012 and 2018.

Of particular interest are two grants approved for the regional centre of Wagga Wagga:

What's her relationship with Daryl Maguire got to do with it?

As it emerged last year, MP Daryl Maguire and Berejiklian were in a "close, personal relationship" for five years, beginning in March 2015.

The potential problem here is that, during that time, Maguire was the Member for Wagga Wagga — the constituency benefiting from those sizeable grants mentioned above.

A key part of the ICAC's probe will therefore relate to whether Berejiklian declared a potential conflict of interest in the process of awarding grants to her then-partner's community.

The ICAC will also investigate whether Maguire breached public trust by using his position to "improperly gain benefit for himself" and his associates.

It's not the first time Maguire has been hauled before the commission. He resigned from Parliament in 2018 after he admitted that he had sought payment to broker a deal with property developers. 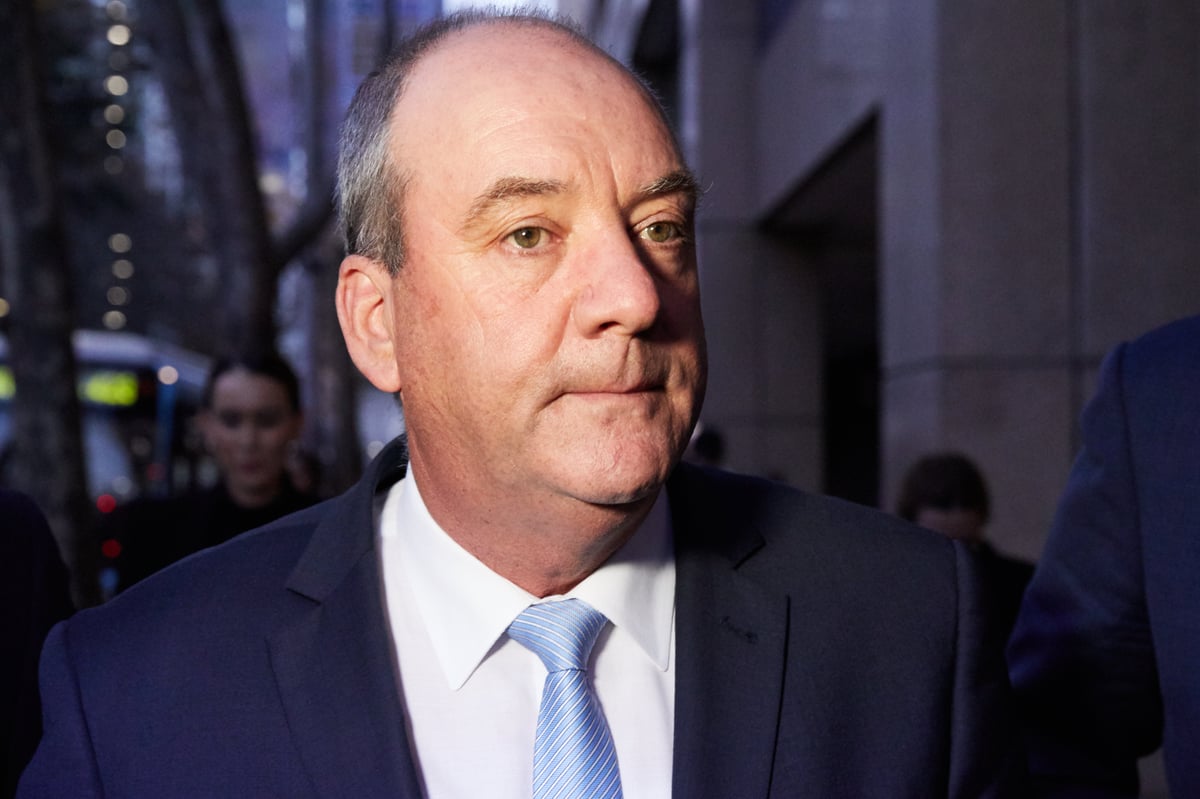 Berejiklian on Friday insisted her resignation wasn't an early admission of guilt.

So why step down?

Because she can't be exempt from her own standards.

"I have made it clear on numerous occasions that if any of my ministers were the subject of allegations being investigated by an integrity agency or law-enforcement, then he or she should stand aside during the course of the investigation until their name was cleared," she explained.

Of course, temporarily standing aside is not an option for a state premier. Hence the more, well, permanent decision.

Who will replace Gladys Berejiklian as the Premier of NSW?

For now, Deputy Premier John Barilaro of the NSW Nationals will serve as the Acting Premier. But that's only until the Liberals elect their new leader.

As it stands, front-runners for the role include Treasurer Dominic Perrottet (the current Deputy Leader of the NSW Liberal Party), Planning Minister Rob Stokes, and Minister for Jobs and Tourism Stuart Ayres. 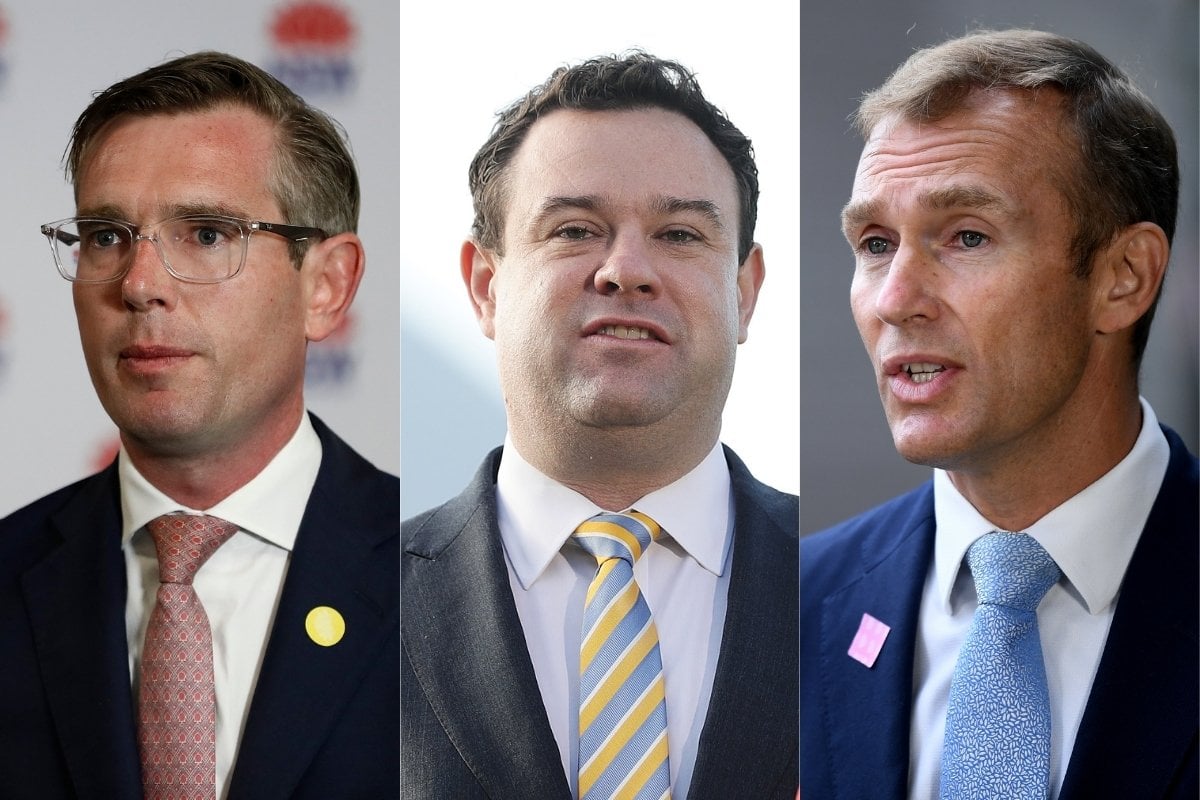 One of these men — (L to R) Perrottet, Ayres and Stokes — could be the next Premier of NSW. Image: Getty/Mamamia.

Perrottet, 39, has been an MP for a decade and is part of the reason Berejiklian was picked unopposed back in 2017. The minority conservative faction of the Libs agreed to support the moderate for the party's top job if Perrottet could serve as her second in charge.

Perrottet has also garnered the support of former prime minister John Howard, who said he was "the best person" to lead the state.

"I do think his background, his experiences as treasurer and very importantly his commitment to economic reform mean that he, of all of them, is the best person to take over the helm," Howard told Sky News’ Sunday Agenda program.

"We need to keep going with things like economic reform, he is very committed to taxation reform."

However, Perrottet is yet to officially show his hand.

His main rival for premier is likely to be Stokes, the moderate Member for Pittwater in Sydney's north. Long touted as a future leader of the party, the 47-year-old previously served as Minister for Heritage, Education, the Environment and the Central Coast.

But there's little doubt Ayres is also eager to throw his hat in the ring. An MP since 2010, the 41-year-old Member for Penrith served as the Sports Minister in the Baird government then as Minister for the WestConnex between 2017 and 2019.

Another possible contender was thought to be Member for Bega Andrew Constance, who attracted significant attention during the Black Summer bushfires of 2019/20 when he was praised for highlighting the plight of his regional constituency. Constance previously served as treasurer and has held the role of Transport Minister for the past six years.

However, on Sunday, the 47-year-old announced he will resign from state politics and will run for the federal seat of Gilmore. He also confirmed he will not contest the NSW Liberal leadership position.

"After almost 20 years serving in the NSW Parliament, today I have made the decision to nominate for local preselection for the federal seat of Gilmore," Constance said in a statement on Monday.

"There has been a lot of speculation over the past few weeks, but I will be resigning as Transport and Roads Minister this week and as the Member for Bega by the end of the year."

A party room meeting is scheduled for Tuesday, which is when the process will likely get underway.

Whoever gets the gig, they're in for the toughest test of their political career.

Reply
Upvote
1 upvotes
If a middle ranking public servant made decisions benefiting a family member or a person he/she had been in a relationship without declaring a potential conflict of interest they would have been dragged in NSW in front of the ICAC or if in the federal public service they would have been severely reprimanded, demoted or fired.  The Premier was in relationship with Daryl Maguire for 5 years without declaring to her colleagues any potential conflict of interest in awarding millions of dollars to organisations in his electorate.  It is that simple, the Premier failed the probity standard she is expecting all her employees to comply with.  Despite that, the decision to resign from both her job and her seat was hers and cannot be blamed on ICAC.
S
suz 7 months ago

Reply
Upvote
1 upvotes
@zaky Absolutely correct, no doubt she has done the wrong thing. She had one rule for everyone else and one rule for herself. Remember she had a covid test and went into work,  not home isolating until she received the negative result. Unbelievable.
M
mamamia-user-482898552 7 months ago

Reply
Upvote
3 upvotes
Neville Wran? He stepped aside temporarily as NSW Premier. There is precedent. Berejiklian could have done the same. She chose not to. This is significant.
C
cat 7 months ago

Reply
Upvote
@mamamia-user-482898552  Neville Wran was 30 years ago, before ICAC existed. And it wasn't the middle of a national health crisis.
If you want to argue precedent, O'Farrell resigned and everyone wrongly assumed he was guilty.
S
suz 7 months ago

Reply
Upvote
3 upvotes
@cat It is irrelevant whether the reason is ICAC or a Royal Commission, she could have done what Wran did and sit it out. I feel she knows what ICAC has on her. She was with the boyfriend for many years,  it beggars belief that she wasn’t aware of what he was up to. I think she got carried away wih the power of her position and they think they can do whatever they like. Thank god for ICAC.
M
mamamia-user-482898552 7 months ago

Reply
Upvote
3 upvotes
...Because a Royal Commission is just a minor, insignificant walk in the park? You can sit out on that but not for ICAC? Please.
C
cat 7 months ago

Reply
Upvote
@suz okay, she could have stepped aside and left Barilo - a man who just resigned himself- in charge, He would have had to lead the state in a major crisis,  a Nationals member without the support of the liberals, which could only lead to ongoing confusion and chaos. How on earth is that a viable option? It would be screwing over the entire state just to hold onto her job.  And I guarantee you would be here saying how selfish she was for refusing to resign.
News
General
Opinion
True Crime
Politics
Sport
Explainer
Entertainment
Celebrity
Reality TV
Movies
TV
Books
Rogue
Royal
Lifestyle
Beauty
Fashion
Weddings
Home
Wellness
Health
Fitness
Travel
Food
Parents
Before The Bump
Pregnancy
Baby
Kids
Teens
School
Parent Opinion
Work & Money
Money
Finance
Career
Lady Startup
Relationships
Sex
Dating
Separation
Friendship
Family
Real Life
Couples