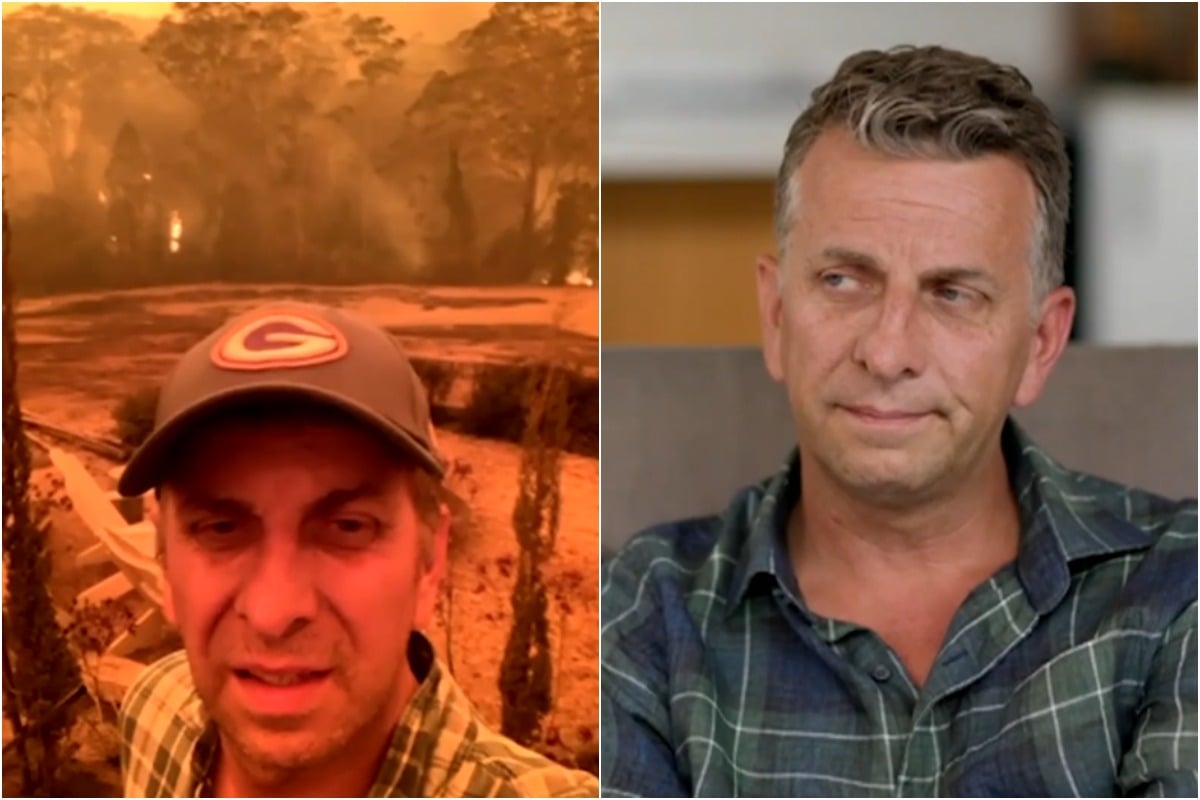 Liberal MP Andrew Constance lives in the Bega valley on the New South Wales South Coast with his wife Jen and her two kids.

On New Year’s Eve, the Clyde Mountain fire burnt right up to the front verandah of their home.

Their house was spared, but 900 properties in the area were lost.

In the months since, Constance – who is now seeing a counsellor to cope – has been left shattered, as he tries to help rebuild his community in the wake of widespread devastation.

WATCH: Andrew Constance on The Project. Post continues after video.

While his family drove to safety on December 31, Constance stayed back to defend the house, only leaving when he realised “I’m going to melt here” as the firestorm became too ferocious.

The NSW Minister for Transport and Roads revealed in an interview with The Project on Sunday night, he “broke the road rules” getting out of there and buckled down in tears when he was reunited with his wife Jen at the local surf club.

Constance thought he was going to die that day. When the rain started just a few weeks ago, it was all put into perspective when Jen’s 10-year-old turned to them and asked: “Now that it’s raining, are we safe?”

Will, along with many children in the area have been left anxious and stressed since the fires tore through, dealing with trauma that Constance says they’ll “have forever”.

The experience has been transformative for Constance – not just in his personal life, but his professional life too.

"I think the thing out of it, what I’ve learnt the last couple of weeks, is that politics doesn’t count in these scenarios, no one cares about it," he said.

As NSW Minister for Transport and Roads, Constance has been at the end of some pretty fierce criticism and admits he was "pretty hated in that role" thanks to the scripted answers, talking points, and "making sure the messages were this that and everything else".

"When Cobargo happened, it really dawned on me that the profession itself in terms of politics is just so wrong in this country. I don't want to be like that anymore," he told The Project.

Prime Minister Scott Morrison arrived in Cobargo on January 3, after weeks of criticism for ignoring and not doing enough for the bushfires which had been burning since September.

He was met with hatred and distrust from the local community who yelled "you're an idiot mate," and refused to shake his hand during the official visit.

At the time, Constance made headlines by saying Morrison "got the welcome he deserved," and now a few months later, the Liberal MP has explained why he said that.

Looking broken and tired, Constance told The Project host Lisa Wilkinson he believes Morrison quite frankly, "shouldn't have been there".

"He made a mistake, and I think deep down he'd know that. But he can't go missing again with this recovery either," he added, remarking the Federal Government "just doesn't get" that you can't just replace a whole herd of dairy cows - someone's livelihood - within a week.

During the interview, Constance also labelled the government's royal commission into the bushfires a mistake.

While he is now seeing a counsellor himself after weeks of sleepless nights, Constance recently met with the Mental Health Minister who told him only 150 people are being supported by the government's services.

"There's 60,000 people who live in this area, and they've all been traumatised. There just isn't the breadth of support services there," he said.

Constance is worried the people in his community "have seen too much" and fears long term effects like depression and mental illness will set in.

"My fear is some of them won't [survive]," he said, choking back tears.

Politicians are supposed to lead their communities and advocate for them. It helps if they walk in the shoes of their constituents. In tough times it's even more important that they do this. It is good to see one politician live this. He's a brave man and his community is lucky to have him as their representative. NSW is lucky to have him in parliament. Australia is lucky that he has a voice because of his status as politician. He will lead his community in seeking help. He will advocate for his community to get help they need. Well done!