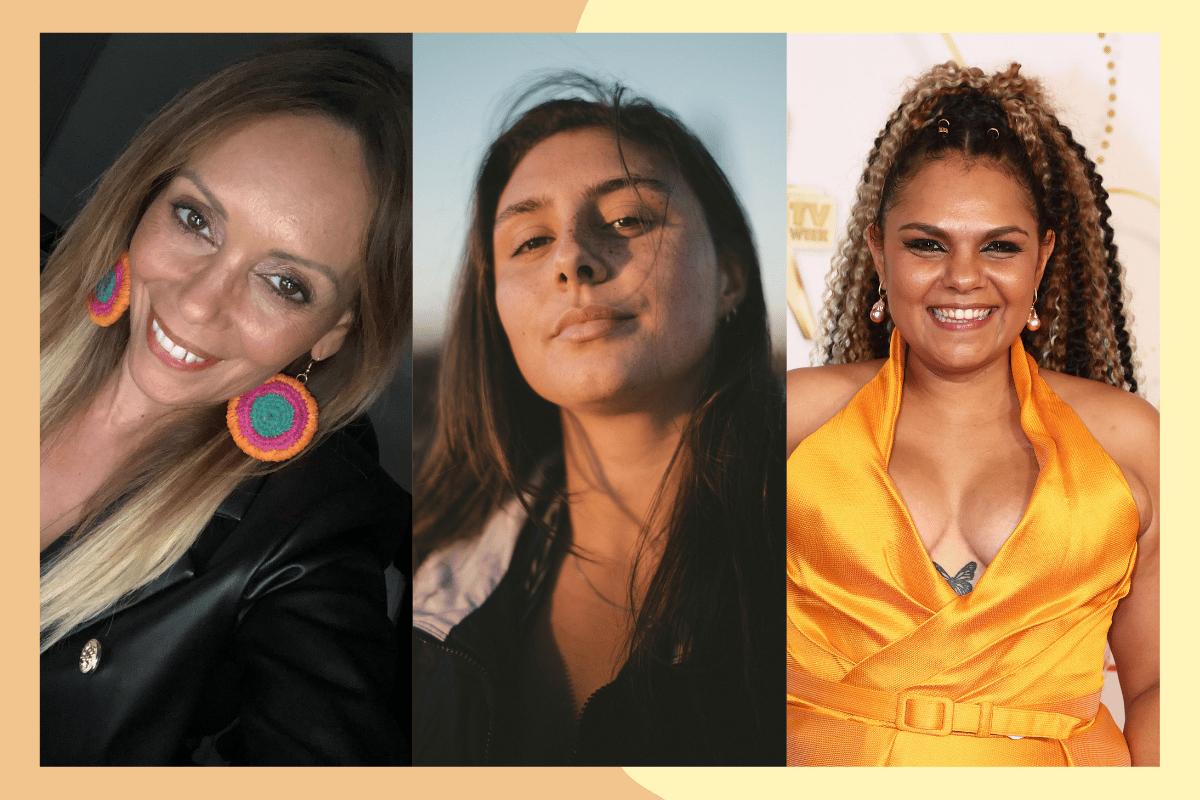 Listen to this story being read by Isabella Ross here.

This week, thousands of people all around Australia and the Torres Strait are celebrating NAIDOC Week.

From July 3 - 10, events are being held across the country to honour the history, culture, and achievements of Aboriginal and Torres Strait Islander people.

With 2022’s theme 'Get Up! Stand Up! Show Up!', this NAIDOC Week places a special focus on the Indigenous Australians who have tirelessly fought for change and continue to do so today.

It also encourages all Australians to stand up for Indigenous communities and work together towards justice.

Watch: Children in the Indigenous communities of the Kimberley, Western Australia, tell us what they aspire to be. Post continues below.

As NAIDOC Week gets underway, we asked three Indigenous women what they want you to know about this time of the year.

What does NAIDOC Week mean to you?

For Tanisha Stanton, NAIDOC Week is all about "celebration" and "reflection".

"I feel like there's a lot of occasions that mark days like survival or invasion day, but NAIDOC Week really feels like a celebration that we can just have for ourselves," the journalist and athlete told Mamamia.

"It's a time to reflect on what our ancestors did and the fight that they had to endure for us to be where we are today in 2022."

The 26-year-old proud Gamilaroi Yuwaalaraay woman says being able to co-host an all-Indigenous television breakfast program, Big Mob Brekky, during NAIDOC Week, is an example of how far we've come as a nation.

"If there's anything to mark that journey [I think it's] us being on a breakfast show. So many black faces is something to celebrate."

"It's the one time of the year where we can all get together and celebrate the achievements and contributions of First Nations people," the 57-year-old host of Indigenous current affairs program, Living Black, told Mamamia.

For Karla, this year's theme, Get Up! Stand Up! Show Up!, is all about paying tribute to her ancestors who have stood up against adversity.

"For thousands of years, First Nations people have always been getting up and standing up and showing up for ourselves, for our people, for our families and for our community. And that goes right back to colonisation and the frontier wars."

"So I'm very, very grateful for those people who've come before me and who fought for everything so I can have the opportunities that I have today."

It's for this reason, Karla says First Nations people need to keep up the fight.

"We've got to keep on getting up and standing up and showing up each and every day, not just during NAIDOC week or reconciliation week, but the whole year round."

Actress Rarriwuy Hick also says sentiments like Get Up! Stand Up! Show Up! should "be embraced outside of NAIDOC week".

"I hope that NAIDOC week is a start, or a reminder, for everyone to actively learn, grow, and acknowledge community," the Proud Yolngu woman told Mamamia.

How are you celebrating NAIDOC Week this year?

Aside from hosting Big Mob Brekky, Tanisha will spend NAIDOC Week reconnecting with her family and getting out into the community.

"There's always so many incredible events that happen around the country," she said, adding she'll get a chance to see some of the celebrations on the breakfast show.

Karla will also spend the week attending events, where she will speak to organisations about Indigenous history and culture.

"[NAIDOC] is a time of celebrating all that we've achieved and contributed to the nation, but it's also a time when we can spread that word throughout the wider Australian community to further that deeper understanding and connection."

Karla says it's particularly important to have these conversations now, considering the federal government has committed to holding a referendum to enshrine a Voice to Parliament in the Constitution.

"It's really important that myself and others get out there and spread the word and start talking about the issues that we're facing... and how we need to move forward in this nation."

Karla also attended the 2022 NAIDOC Awards in Melbourne on Saturday, where retired tennis player Ash Barty was named person of the year.

How can non-Indigenous Australians be a good ally?

There's a number of ways non-Indigenous Australians can be good allies for the Indigenous community not only during NAIDOC Week, but throughout the whole year.

The first - and perhaps the most important - is by showing up for Indigenous communities and standing up for change.

Rarriwuy also says we can do our part beyond NAIDOC Week.

"I think it’s about listening and taking responsibility to Get Up! Stand Up! Show Up! independently, and to share that enthusiasm and learnings with family and friends, to spread the word and start a cycle that hopefully continues outside of NAIDOC Week."

Another way to be a good ally is by learning about Indigenous culture by having conversations and consuming Indigenous content.

"I think the arts can be a real gateway into further education," says Rarriwuy, who stars in the NITV’s drama series True Colours, which features Arrernte language, art, and culture.

"I hope after watching [True Colours] people find out things they didn’t know before, and want to continue researching and understanding the beauty of the oldest living culture in the world."

Karla will also be hosting special NAIDOC Week episodes of Living Black on NITV, including an investigation into Indigenous art theft.

"I strongly urge people to tune into SBS and NITV all the time because you always see Indigenous content... it's very entertaining, but it's also highly educational and can really create a lot of awareness, just by watching."

True Colours will air from Monday 4 July on SBS and NITV. You can also watch Big Mob Brekky every morning during NAIDOC Week. Living Black will also run NAIDOC Week episodes on NITV.

Reply
Upvote
So important to talk about how to be a GOOD and HELPFUL ally, from an Indigenous perspective. The road to hell is paved with good intentions - letting non-Indigenous people know what is actually beneficial to communities is important.
P
pippa a month ago

Reply
Upvote
3 upvotes
We must also remember my skin niece Jacinta Price, recently elected as a senator to sit in federal parliament. Jacinta lives in Alice Springs and is the daughter of Bess Price, a former NT senator.
Jacinta has lived experience of remote communities when she was younger and has worked tirelessly for many years to bring awareness of the plight of Aboriginals living on country, to the Australian public. She believes strongly that it’s necessary to raise those living remotely out of the mindset of victimhood. She maintains that the indigenous are just as capable of living their best life if they’re given the right guidance. She refers to herself as a Warlpiri Celtic woman, acknowledging both her heritages.
Resources
Very Peri
Skin
News
General
Opinion
True Crime
Politics
Sport
Explainer
Entertainment
Celebrity
Reality TV
Movies
TV
Books
Rogue
Royal
Lifestyle
Beauty
Fashion
Weddings
Home
Wellness
Health
Fitness
Travel
Food
Family
Before The Bump
Pregnancy
Baby
Kids
Teens
School
Parent Opinion
Work & Money
Money
Finance
Career
Lady Startup