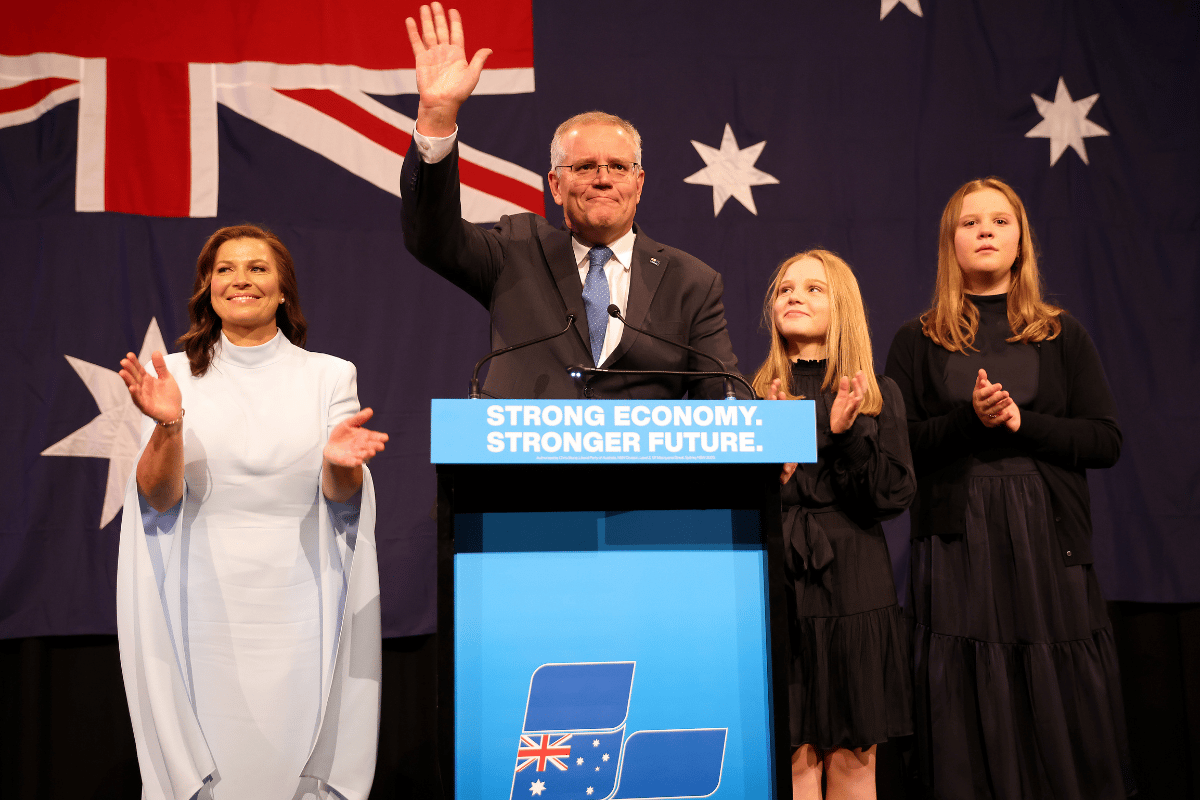 On Monday, Anthony Albanese was sworn in as Australia's 31st prime minister, after claiming victory against the Coalition in Saturday's election.

Standing before Governor-General David Hurley, Albanese said, "I, Anthony Norman Albanese, do solemnly and sincerely affirm and declare that I will well and truly serve the Commonwealth of Australia, her land and her people in the office of prime minister."

Richard Marles has also been sworn in as the Deputy leader, Penny Wong as Foreign Minister, Jim Chalmers as Treasurer, and Katy Gallagher as Finance Minister.

But now that we have a shiny new PM and four ministers, what happens next? And what will happen to Scott Morrison and the Liberal party now?

As we start the week with a new government, we've rounded up all your burning post-election questions in one place.

Will we have a majority government?

Votes are still being counted so we don't yet know if Labor will reach 76 seats and claim a majority government.

But Finance Minister Katy Gallagher is quietly confident they will reach a majority.

"We're hopeful for a majority government but there's more votes to be counted. That's the reality. We've got a few more days to go," she told ABC News Breakfast on Monday.

"There's certainly a strong and credible path to a majority for us."

The latest Australian Electoral Commission figures have Labor ahead in 75 seats and the Coalition with 52.

﻿What happens to Scott Morrison now?

On Saturday night, Morrison announced he will be stepping down as leader of the Liberal party after conceding defeat.

"To my colleagues who have had to deal with very difficult news, and have lost their seats tonight, I as leader take responsibility for the wins and the losses," he told supporters at the Liberal headquarters in Sydney.

Morrison will hand over the leadership at the next party meeting, party insiders told the ABC.

But this won't be the last we see of the former prime minister. In a Facebook post on Sunday, Morrison said he will stay in politics and serve his local community, after winning his seat of Cook.

"I am now looking forward to returning to the Shire, my family and continuing to serve my local community. For me, life has always been about faith, family, friends and community."

"Jenny and I thank Australia for the honour to have served."

It's also worth noting, former prime minsters get a pretty decent pension.

Former PM John Howard reportedly gets $250,000 a year with a stack of bonuses on top of that, including travel expenses.

﻿Who will lead the Liberal party now?

There are a few names being thrown around when it comes to the opposition leader, but Former Defence Minister Peter Dutton is the clear frontrunner.

"Any member of the party room is eligible to put their name forward ... but my sense is there is a consensus forming that Peter Dutton is the right choice for these times," Liberal senator James Paterson told Sky News.

Josh Frydenberg would be a likely contender to run against Dutton, however, it looks like he may lose his seat of Kooyong against teal independent Dr Monique Ryan.

Other people who could throw their names into the ring include Energy Minister Angus Taylor, Home Affairs Minister Karen Andrews and Trade Minister Dan Tehan.

"There is certainly the possibility of a challenge from Angus Taylor," former Labor adviser Sean Kelly told Weekend Today. "But I think Peter Dutton is head and shoulders above Taylor in that race. With Peter Dutton a conservative... we could really see a shift towards the right."

What happens when MPs lose their seat?

Speaking to Mamamia's daily news podcast, The Quicky, political scientist and Associate Professor Paul Williams from Griffith University, explained a number of people can lose their jobs if a member of parliament doesn't win their seat.

"If you're a backbencher and you lose your seat because it's a marginal seat, the people that work in your office, they would usually go too because they're usually partisan appointments, so people like secretaries and other people who work in your office."

However, if you're a minister in the opposition party and you haven't lost your seat, you will then become a shadow minister.

"Those people would be kept on and would continue politically advising and media advising from the opposition benches."

﻿When will the Biloela family be freed?

During the election campaign, Labor promised the Murugappan family - Priya, Nades and their two girls Kopika and Tharnicaa - would be able to return home to Biloela in Queensland if they won.

Speaking to ABC Radio Brisbane on Monday, Treasurer Jim Chalmers says he wants the family to return home "as soon as possible" and is expecting to be briefed on the matter this week.

"Biloela is a bighearted, warm, welcoming town and the sooner we can get that beautiful family home to Bilo, the better," he said.

Supporters are hopeful the family will return home for Tharnicaa's fifth birthday on June 12, in just under three weeks.

"She has had every birthday in detention, so it would be amazing for her fifth birthday to actually get to celebrate her freedom... a huge thing for a little five-year-old," family friend and long-time Home to Bilo campaigner Angela Fredericks said.

When will we know who is in Labor's ministry?

These ministers will cover all portfolios until the Labor caucus can meet next Tuesday to establish a full ministry.

The full ministry will then be sworn in on June 1.

Reply
Upvote
1 upvotes
@1990 he said he accepted the result and wished the new government well. Thats not really noteworthy, its what people say when they lose an election.
L
laura__palmer a month ago

Reply
Upvote
1 upvotes
@1990 he was gracious, so he should be. So was Albo. Thanked Morrison for his service. This is how it should be. It shouldn’t be particularly noteworthy, just part of it all.
D
daijobou a month ago

Reply
Upvote
1 upvotes
@cat I guess in the post-trump era it is now seen as worthy of a medal to not have a huge fit and try to undermine the democratic process.
C
cat a month ago

Reply
Upvote
1 upvotes
@daijobou the bar truly is on the floor.
R
rodeen a month ago