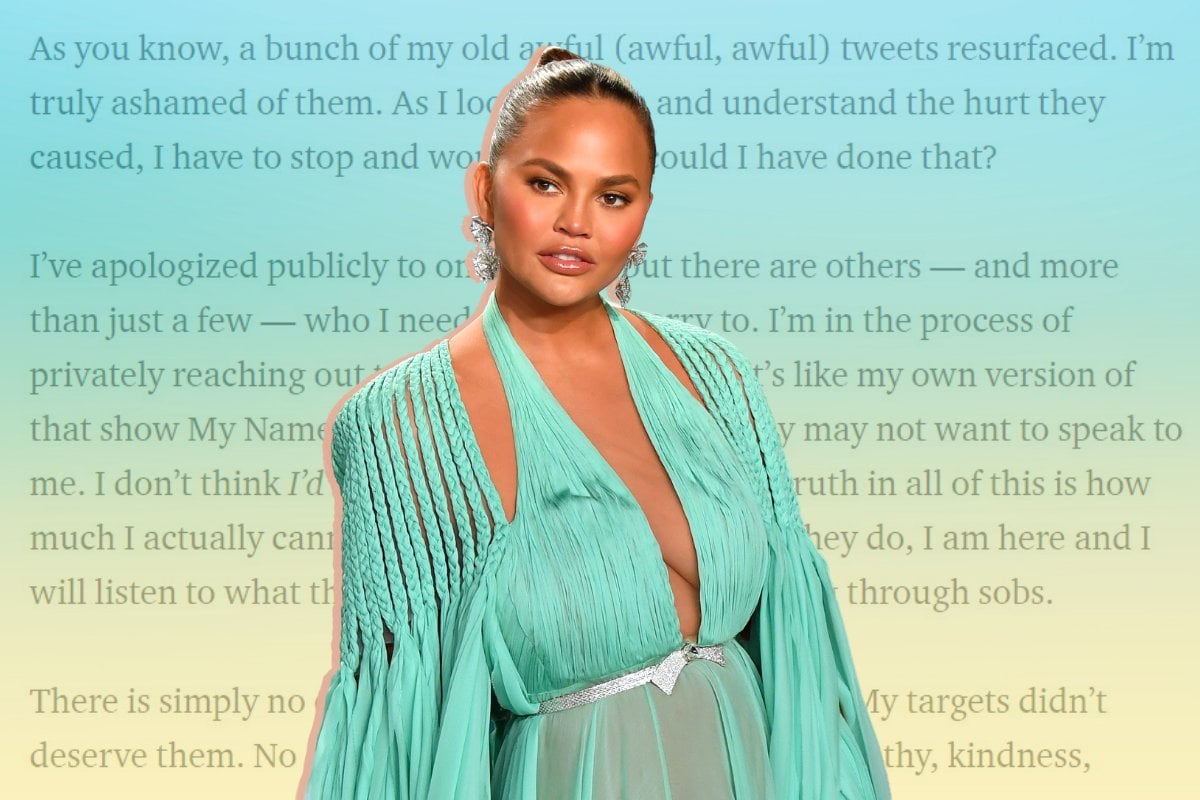 For a month, the social media accounts of the internet's former darling Chrissy Teigen have remained silent.

Teigen went underground in May when singer and reality TV personality Courtney Stodden said in an interview they were harassed and bullied after their marriage to 51-year-old actor Doug Hutchison in 2011, when they were 16. Stodden mentioned tweets from Teigen, which then resurfaced.

In screenshots from that time period, which were recently republished by Buzzfeed, Teigen called Stodden "an idiot" and "effing weird", and told them to "go to sleep forever."

Teigen initially apologised for her treatment of Stodden, saying she was "mortified" with who she used to be: "an insecure attention seeking troll".

is nothing compared to how I made Courtney feel. I have worked so hard to give you guys joy and be beloved and the feeling of letting you down is nearly unbearable, truly. These were not my only mistakes and surely won’t be my last as hard as I try but god I will try!!

Then she retreated into another self-imposed social media exile, while the conversation raged on without her.

Soon, other old Teigen tweets were resurfaced which showed this was not an isolated incident.

In other posts, Teigen made a joke about Lindsay Lohan and self-harm and said if she was destined to have a child like Avril Lavigne, "I would choose to have a barren, sterile existence that ends when I die".

After a month of silence, Teigen reappeared online on Monday (Tuesday AEST) with a longer, more self-reflective acknowledgement of her behaviour.

"I want you to know I've been sitting in a hole of deserved global punishment, the ultimate 'sit here and think about what you've done,'" she wrote on Medium and posted to social media.

"Not a day, not a single moment has passed where I haven't felt the crushing weight of regret for the things I've said in the past."

She said she was in the process of privately reaching out to the people she insulted, which also includes Teen Mom's Farrah Abraham. Earlier this month, Abraham said Teigen was "an unfit person in society".

"I don't think I'd like to speak to me... But if they do, I am here and I will listen to what they have to say, while apologising through sobs," Teigen said.

She also wrote about how she initially used social media as a way to "snark at some celebs", which she believed made her "cool and relatable".

"Now, confronted with some of the things that I said, I cringe to my core. I'll honestly get sharp, stabbing pains in my body, randomly remembering my asshole past, and I deserve it."

Teigen said therapy and growing up has made her a more empathetic person.

"I'm more understanding of what motivates trolling — the instant gratification that you get from lashing out and clapping back, throwing rocks at someone you think is invincible because they're famous. Also, I know now how it feels to be on the receiving end of incredible vitriol. Believe me, the irony of this is not lost on me."

She ended her post by saying she was not asking for forgiveness, only patience and tolerance.

"I have so much love to give if you are open and willing to accept it. And if not, that’s okay too. That’s something I work on being more okay with every day. I know I let you down, but I hope I can make you proud," she wrote.

"We are all more than our worst moments."

The post has been received positively by many, including celebrities such as Jennifer Garner and husband John Legend, who commented messages of support on Instagram.

Meanwhile, critics have pointed out the amount of 'I' statements in Teigen's post and the lack of focus on the victims of her comments.

In the past month, Teigen has lost many business deals and planned appearances due to the controversy.

Multiple brands including Macy's and Bloomingdale's reportedly dropped their partnerships with Teigen. She has also been removed from the marketing of her new cleaning brand in partnership with Kris Jenner, and bowed out of a guest voiceover role in the second season of Netflix comedy Never Have I Ever.

Reply
Upvote
1 upvotes
So she's resurfaced to tell us all how she's feeling - despite acknowledging that people don't want to hear about her at the moment.  Nothing about that sounds geniune, seems like an attempt at a soft relaunch.
D
dp a year ago

Reply
Upvote
2 upvotes
Hmm. No matter how you spin this, it's pretty bad. The most recent examples were only a few years ago and it's hard to believe that she went so long behaving this way.