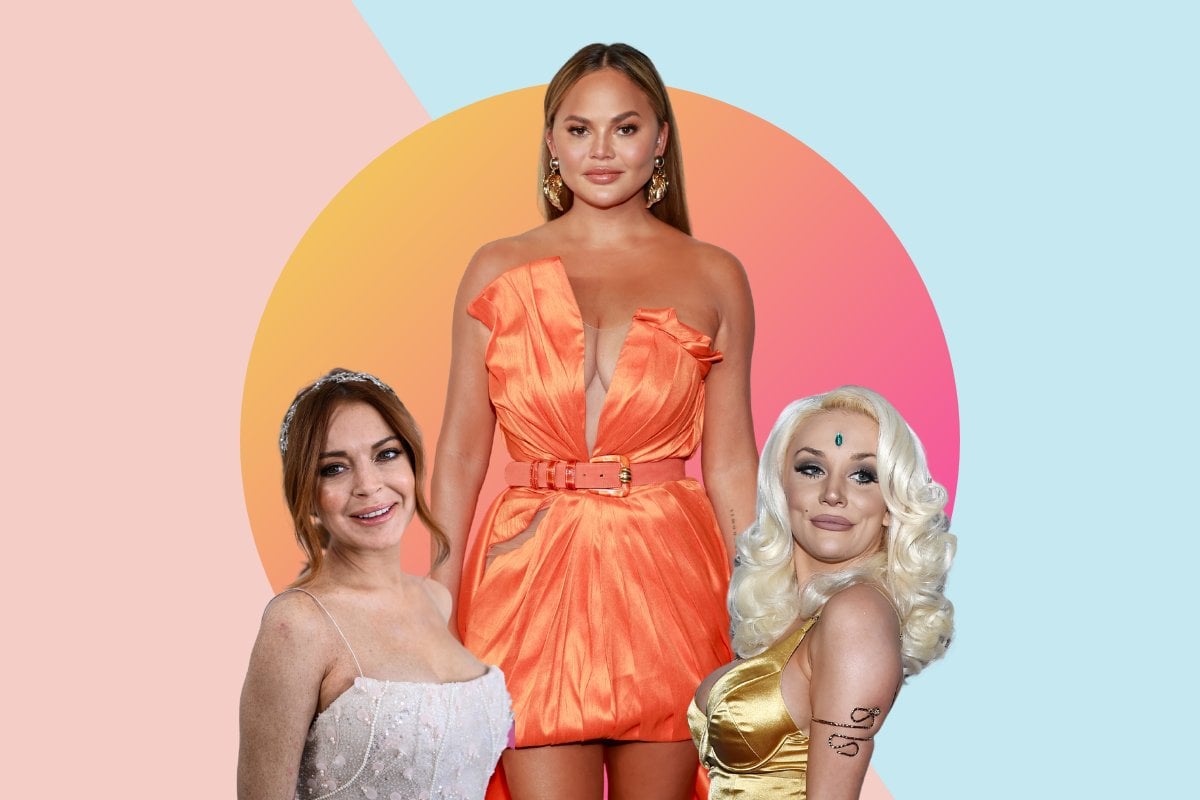 There's a saying, repeated and co-opted by many since first being muttered by former United States Secretary of State, Madeleine Albright: "There is a special place in hell for women who don't help other women."

Used as a battle cry against a society that pits woman against each other and platforms 'cat fights' (go read any headline about Meghan Markle and Kate Middleton, for example), the saying is meant to tell women that competition is not the only way to get ahead.

That is correct, and very important. But it's also a bit simplistic. Because women are not above criticism just because they're women, but especially because it ignores the fact that women are, and have been for centuries, conditioned not to help each other.

Listen: The Quicky on toxic femininity. Post continues below audio.

Recently, Chrissy Teigen has lost her title as the internet's favourite person because of the reemergence of toxic tweets she sent in the past, which bullied and ridiculed other women and non binary people for their looks, behaviours and relationships.

Actor and singer Courtney Stodden claimed that Teigen had posted multiple tweets about them, and even sent them direct messages on the app.

"She wouldn’t just publicly tweet about wanting me to take 'a dirt nap' but would privately DM me and tell me to kill myself," they told the Daily Beast. "Things like, 'I can't wait for you to die.'"

In screenshots from that time period, which were recently resurfaced by Buzzfeed, Teigen called Stodden "an idiot" and "effing weird", and told them to "go to sleep forever."

Other resurfaced comments include Teigen joking about Lindsay Lohan and self-harm and saying if she was destined to have a child like Avril Lavigne, "I would choose to have a barren, sterile existence that ends when I die".

Teigen's old tweets mostly targeted other women. She has since apologised, saying she is "mortified" with who she used to be, "an insecure attention seeking troll".

is nothing compared to how I made Courtney feel. I have worked so hard to give you guys joy and be beloved and the feeling of letting you down is nearly unbearable, truly. These were not my only mistakes and surely won’t be my last as hard as I try but god I will try!!

The controversy has opened up a conversation around 'toxic femininity', the female version of the toxic masculinity definitions we are more familiar with.

Dr Alexa Appel, research support officer in the School of Philosophical and Historical Inquiry at University of Sydney, and an expert on young women and media culture told Mamamia's The Quicky that to her, toxic femininity is an exaggerated version of typical 'feminine' values.

"It's when women either use their gender to obtain certain privileges, or really when women express stereotypically feminine traits like passivity, empathy etc. and this leads to them ignoring their own needs to sustain those around them," she said, "specifically the needs of men or even children."

Another way this plays out - and Teigen's tweets are just one example - is through 'meanness' among women. Legendary movie Mean Girls is the perfect example.

"I think [Mean Girls screenplay writer] Tina Fey really wanted to espouse a message of kindness amongst girls and it was a celebration of female friendship in a way, and a warning of what the consequences are of meanness between girls."

Dr Appel said in order to combat this, we needed to educate women and girls on the wide-reaching consequences of this behaviour, even when it just happens within friendship groups.

"The problem of this cruelty that we see among girls carries into womanhood so I think it's crucial to create awareness about this," she said.

Feminist author and freelance journalist Jane Gilmore thinks these behaviours are imposed on women, rather than being something inherently within us, and as such is more of an extension of toxic masculinity.

"It's an idea of women as being their own worst enemies. As being bitchy and cliquey and clubbing up against each other, and these other things that we are told women are more often than I think they actually are," she said.

She believes the behaviours are not as common as they appear to be in media. However, they are amplified and used as a way of creating scenarios where men can point out 'see what women are like, look how bitchy they are'.

"It's not that being feminine or being female is toxic. It's that there are certain stereotypes of being female that are interpreted as toxic, and they are myths and stereotypes that actually rarely happen so sensationalist media go looking for examples of it rather than looking at what's really going on," she explained.

She said the underlying idea that femininity is toxic is benefiting the patriarchy.

"Women acting collectively, it is the most dangerous thing to men in power that can exist, because if you look at what women have in the last hundred years by acting together, we have changed the world...

When you consider this, it's unsurprisingly that we are schooled to fear and compete with other women.

It's a patriarchy preservation tactic.

Perhaps, there should also be a special place in hell for the people who uphold a society which makes women believe they can only help other women at the expense of themselves.

Reply
Upvote
2 upvotes
When I was younger I noticed this huge difference between male and female psychologies. When young men see a man who receives a lot of attention from the opposite sex, they all want to hang around him, be in his company, be his "friend".  But when women see this in a woman, they will say not nice things about her, say she is not that attractive, deride her if she wears provocative attire. It was most interesting. I wonder if that's still the case?

Reply
Upvote
1 upvotes
I really don't think you're ever going to get a situation where humans exist in a group  where they don't have conflict and create a social hierarchy, regardless of gender (and I think boys can be at least as bitchy as girls, if not more). If we want to remove that we probably need to stop putting large groups of children together in schools, and stop creating chains of commands in workplaces. Certainly we'd need a better political system than the current one, where you win by bitching about the opposition and colluding to kick someone out of the group in a leadership coup.
In any case, I don't think we can expect girls to behave better than the world around them.
News
General
Opinion
True Crime
Politics
Sport
Explainer
Entertainment
Celebrity
Reality TV
Movies
TV
Books
Rogue
Royal
Lifestyle
Beauty
Fashion
Weddings
Home
Wellness
Health
Fitness
Travel
Food
Parents
Before The Bump
Pregnancy
Baby
Kids
Teens
School
Parent Opinion
Work & Money
Money
Finance
Career
Lady Startup
Relationships
Sex
Dating
Separation
Friendship
Family
Real Life
Couples