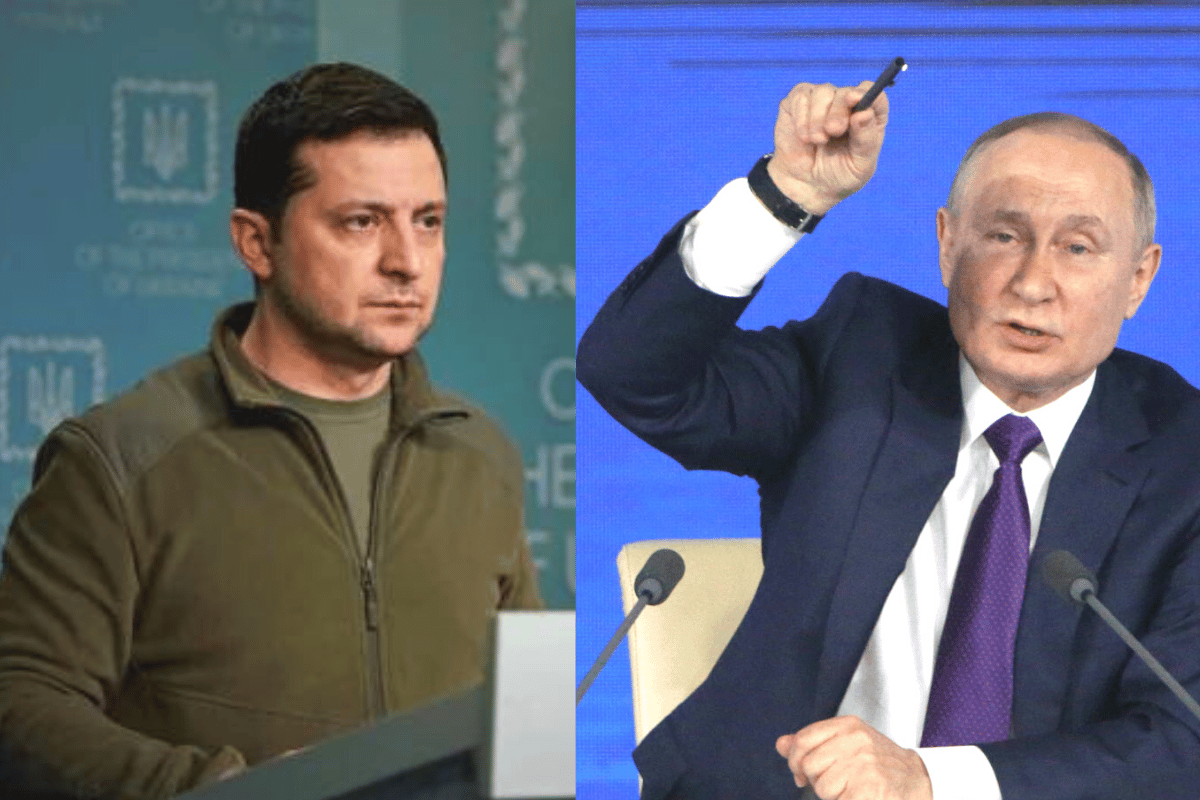 For the last two weeks, the world has been watching on in horror as Russia invades Ukraine.

There has already been so much bloodshed. So will this war continue for months to come, or are there pathways ahead for a de-escalation of tensions?

When words like 'nuclear' keep being thrown into the mix, the potentially more widespread ramifications of this conflict start to feel really overwhelming.

At the centre of this war is a man acting largely unchecked. And President Putin has already shown he is not afraid of impulsivity.

With so much propaganda being mixed in with real reports from the conflict zones, it can be hard to decipher which side has the upper hand.

So how and when does this end?

Mamamia’s news podcast The Quicky asked John Blaxland, a professor of international security and intelligence studies at the Australian National University’s Strategic and Defence Studies Centre in Canberra, to run us through the possible outcomes.

Could Putin take control of Ukraine and install a puppet pro-Russian government?

“This theory is becoming less and less likely as time goes by. That appears to have been [Putin’s] intention in the first couple of days when they sought to capture the airport near Kyiv and insert special forces to remove/capture [Ukrainian President] Volodymyr Zelensky and then install a puppet government,” Professor Blaxland noted.

As someone who has extensive experience in the intelligence community and is the author of The Official History of ASIO, Professor Blaxland says “the resistance now is too great”.

“The damage done to goodwill towards Russia is, I believe, so profound that this outcome is no longer feasible.”

“The Ukrainian armed forces have spent the last eight years looking to heighten their operational focus. They have similar equipment and tactical procedures to the Russians, so one for one, they’re pretty much on par, but they have the home ground advantage,” Professor Blaxland told The Quicky.

We’ve also seen reports of Russian forces having to regroup and recalibrate as they weren’t expecting this much pushback.

“They are now planning for a much-prolonged campaign. That’s happening while the economic sanctions are being imposed, the likes of which many are saying Putin had not anticipated.”

The damage to the Russian economy is expected to be profound as well. And with this, will come a growing pressure for some kind of compromise. There is also considerable assistance coming from Europe to help Ukraine, whether it be equipment, weapons or monetary aid. Not to mention reports that Russian soldiers are feeling demoralised. It is this combination of factors that leaves Professor Blaxland to think that Ukraine will not just rollover.

“This is now much more complicated and difficult. No one is seriously contemplating offering Ukraine NATO membership, but nobody wants to see Putin win. It’s not at all clear that Russia will come out of this with a convincing win,” Professor Blaxland said.

“My sense is the Russian resolve is very much in question: no one in Russia was prepped for this, and in war, morale is a very important factor. We have a toxic brew here that leaves Russia poorly placed to consolidate the progress it has made.”

There’s an enormous amount of reluctance from other countries to get too involved in this conflict or to formally commit to assisting Ukraine.

If there was a scenario where NATO forces were formally up against Russian forces, a serious escalation could occur.

“Putin has basically threatened to go nuclear if the above happens. There have been signals that this is where he is prepared to go. Not necessarily with the dropping of an atomic bomb, but there are a dozen nuclear power plants across Ukraine and that presents an opportunity for him to exploit,” said Professor Blaxland.

There are nine countries that possess nuclear weapons, but no country has actually used them since 1945. Most experts believe Putin won't resort to using his.

Hans Kristensen, director of the Nuclear Information Project at the Federation of American Scientists, told New Republic earlier this week, "There is not a significant risk at this point."

Will Putin ever agree to a diplomatic solution?

“Putin would have to be convinced that ‘this deal’ is the best deal Russia could get. I think the person best placed to convince him of that is China’s President Xi Jinping," said Professor Blaxland.

Of course, NATO countries have been appealing for this solution for weeks. But Moscow has made it clear the only way in which they will end this invasion is if Ukraine submits to their demands, which includes ceasing all military action, changing their constitution to guarantee neutrality, and recognising Crimea as Russian territory.

There have already been at least three attempts for a sit down between Ukraine and Russia, to discuss a diplomatic end to this crisis - none were successful.

American intelligence suggests Putin is growing increasingly frustrated. Because he is acting largely alone - it's hard to anticipate his next move.

“The Russian government all revolves around Putin. So it’s kind of a perfect storm: nobody is in a position to easily challenge him. It’s up to one man, and that’s a scary thought when that man becomes paranoid, obsessive and extremely power-hungry,” Professor Blaxland concluded.

Reply
Upvote
I don't think that will happen Caz as 70% of Russians really do like Putin. A few of the GP's I work with are Russian and they present a different view they we are presented with.
C
caz gibson 5 months ago

Reply
Upvote
I think that the most effective way of removing Putin will be at the hands of the Russian people.
Some of them will have to be brave enough (together with extreme protests from thousands of Russians ) to actually physically remove him to be arrested & charged.
The world can see that he's at least guilty of serious war crimes.