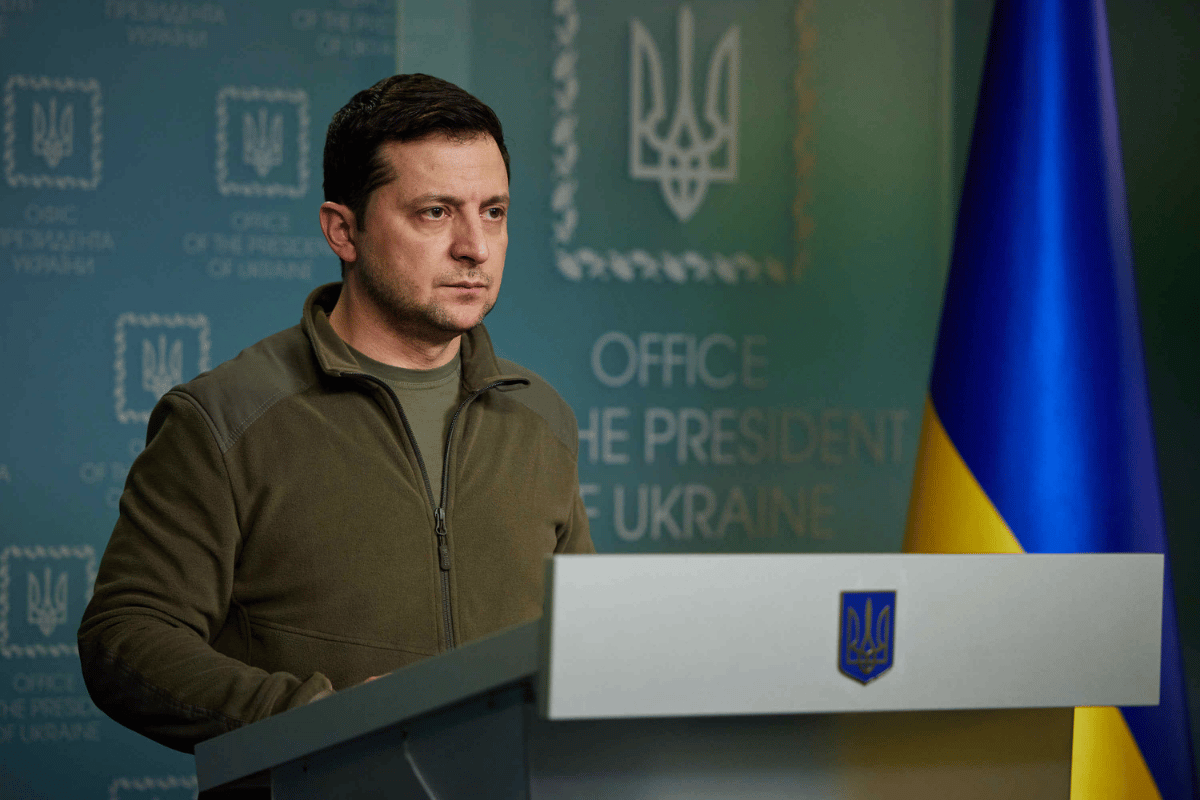 Ukraine's President Volodymyr Zelensky has been a figure of stoicism and defiance since Russian President Vladimir Putin ordered a "military operation in eastern Ukraine" following months of increased tensions.

Even amid the very real threats to his own life - Zelensky himself saying he is Putin's "number one target" - the Ukrainian President has vowed to stay in his country and fight.

But what some may not know is this isn't the first time Zelensky has 'played the role' of a powerful leader. In 2019, he had a starring role as President on a popular Ukrainian television series. And only three years later, Zelensky is now leading Ukraine through war.

Here's everything we know about the Ukrainian leader.

Zelensky is a comedian and actor turned President.

Volodymyr Zelensky was born to Jewish parents in 1978 in the Ukrainian city of Kryvyi Rih. His father was a professor, his mother a former engineer.

As a young adult, Zelensky studied and received a law degree from the Kryvyi Rih Institute of Economics. But alongside his legal studies, Zelensky was passionate about comedy.

In his late teens, Zelensky decided to join a local sketch-comedy competition called K.V.N., a Soviet-era international comedy competition that remains popular in post-Soviet countries. Building on his love and talent for making people laugh, Zelensky began organising comedy shows and had his big break in the Ukrainian entertainment industry.

After starring in various feature films, it was in 2015 that Zelensky became the star of the television comedy and political satire series, Servant of the People. Ironically, he played the role of the President of Ukraine. Zelensky's character was a high-school teacher who surprisingly wins the country's presidential election after a video of him ranting against government and political corruption goes viral and catapults him to fame. 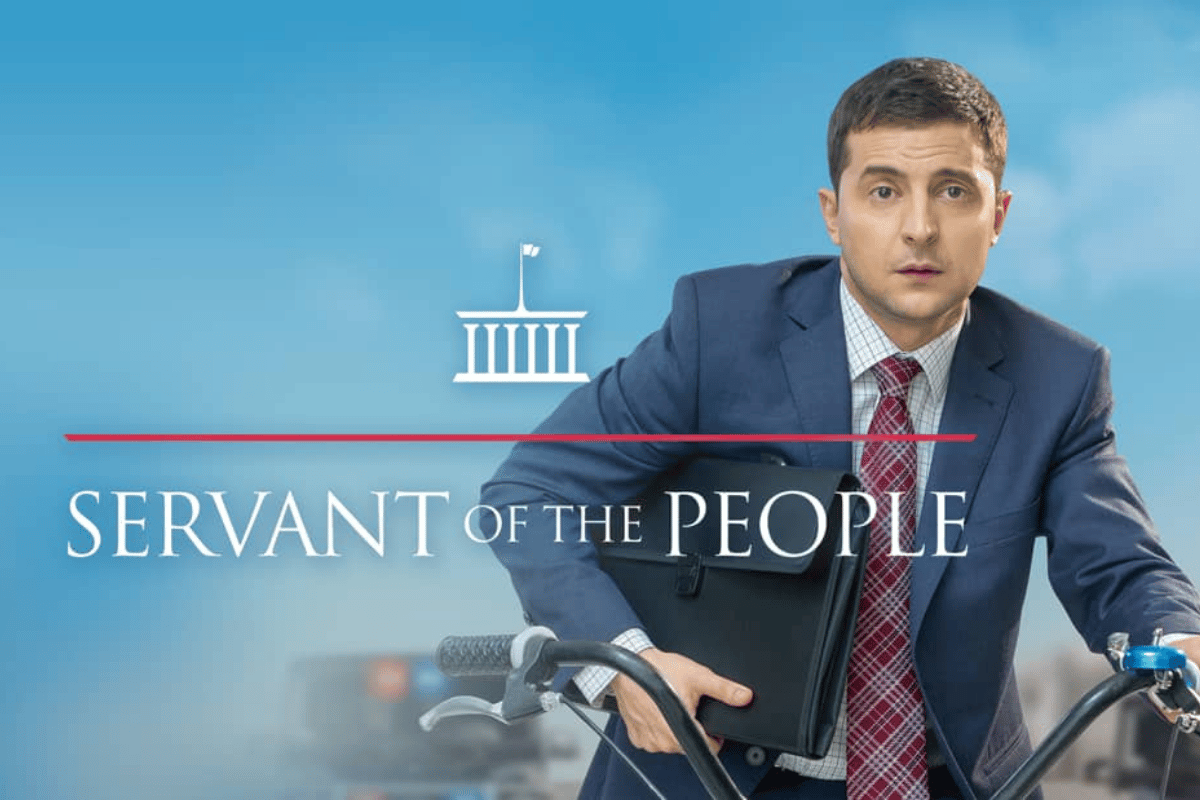 Zelensky in Servant of the People 2015. Image: Kvartal 95/Netflix. 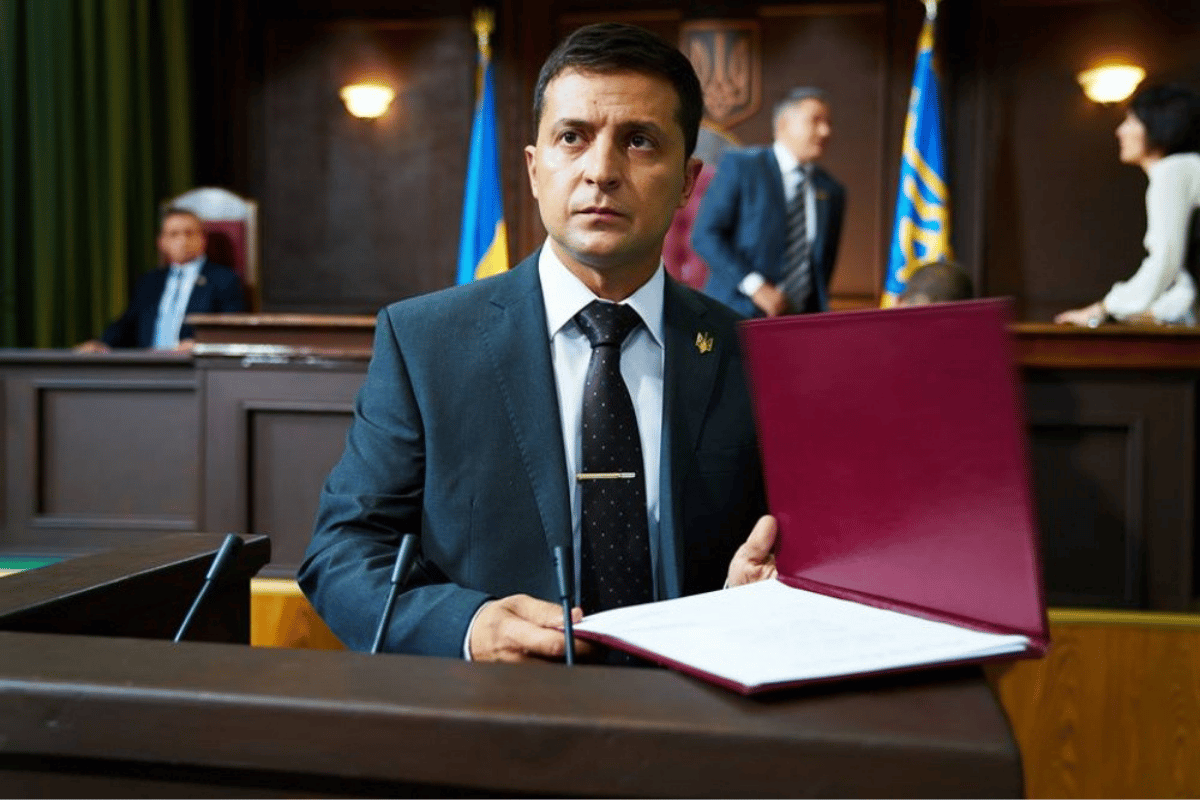 Zelensky in Servant of the People 2015. Image: Kvartal 95/Netflix. Servant of the People was actually produced by Kvartal 95: a film production company owned by Zelensky. The show faced criticism in Russia: not just because of the political content depicted, but also the man behind the series. After Ukrainian media outlets reported that Zelensky's company Kvartal 95 had donated 1 million hryvnias (Ukrainian currency) to the national army, some Russian politicians petitioned for a ban on Zelensky's television and comedy shows in Russia.

Coincidentally or not, three years later Zelensky entered politics and founded a party aptly called Servant of the People.

He had no previous political experience, but was determined to bring "professional, decent people to power".

"I don't trust anyone at all. Politics is not an exact science. Here, it's only variables: including the politicians in this country," he said in an interview with Time Magazine around the time of his election.

So in 2018, Zelensky led a successful presidential campaign that saw him become the real President of Ukraine in 2019.

A major reason for Zelensky winning the election was due to the political disenchantment and lack of trust felt by the Ukrainian people towards the then-government in power.

They looked to Zelensky: a political outsider and underdog who ran with no specific party affiliation and ran the majority of his campaign online and via social media. Not to mention he was incredibly vocal about his criticism towards corruption, something that plagued Ukrainian politics for decades prior.

He amassed 73 per cent of the election vote. But Zelensky was tasked with quite the challenge: a global pandemic, a strained economy, low living standards among the country's population and broken down peace talks with Putin.

With all of this in mind, opinion polls directed towards Zelensky, taken in December 2021, showed his popularity had fallen to 25 per cent. It has since been Zelensky's response to Putin and his growing threats that has now put Zelensky back in favour with his people.

On February 19, 2022, he conducted a speech at the Munich Security Conference, where he demanded stronger actions from world leaders given Russia's war threats were intensifying.

A post shared by Stand with Ukraine 🇺🇦 (@withukraine)

The face of the Ukrainian resistance.

On Thursday, February 24, the world watched as Putin began a "military operation" in Ukraine. And Zelensky's wartime role commenced.

"Today Russia launched an invasion on Ukraine. Putin started a war against Ukraine, against all [the] democratic world. He wants to destroy my home: everything we have built, everything we have lived for. You are brave and unbreakable because you are Ukrainians."

"Try to keep life normal, as far as life can be normal," Zelensky said, while he called on citizens to take up arms and fight. "Take care of your neighbours and your friends."

In the following day's press conference, Zelensky noted that explosions and shellings taking place in Ukraine, are a stark reminder to the attacks that took place in 1941 in Kyiv: i.e. World War II.

"The world's most powerful forces are watching from afar. Did yesterday's sanctions convince Russia? We hear in our sky and see on our earth that this is not enough."

A post shared by Stand with Ukraine 🇺🇦 (@withukraine)

On Saturday (AEDT), Zelensky once again addressed the nation, but this time in a defiant self-shot video taken on a city street in Ukraine, the President wearing khakis and unshaven. He vowed to not leave the country, instead rallying citizens to continue resisting the Russian army.

Just hours earlier, Zelensky reportedly said goodbye to European leaders in a video call, saying he understood Russian troops were coming for him, but vowed to stay in Kyiv.

According to reports, Zelensky told other world leaders that "this might be the last time you see me alive".

Soon after the call, he shared this public video statement, saying: "[The] enemy has marked me down as the number one target. My family is the number two target. They want to destroy Ukraine politically by destroying the head of state. I will stay in the capital. My family is also in Ukraine."

Zelensky is married to Ukrainian architect and screenwriter Olena Zelenska and the couple have two children.

"We're all here. Our military is here. Citizens in society are here. We're all here defending our independence, our country, and it will stay this way," Zelensky said.

And given the fact multiple news outlets - including The Kyiv Independent who are on the ground - have reported that explosions have rocked Ukraine's capital Kyiv, Zelensky's battle has only just begun.

He concluded: "What do we hear today? It's not just rocket explosions, fighting and the roar of aircraft. This is the sound of a new iron curtain lowering and closing Russia off from the civilised world."

Reply
Upvote
3 upvotes
He's certainly doing much better than I imagine our career-politician Pm doing- we all know he would have been in Hawaii before the troops even crossed the border. We should consider electing more actors.
A
alessandra.z87 4 months ago