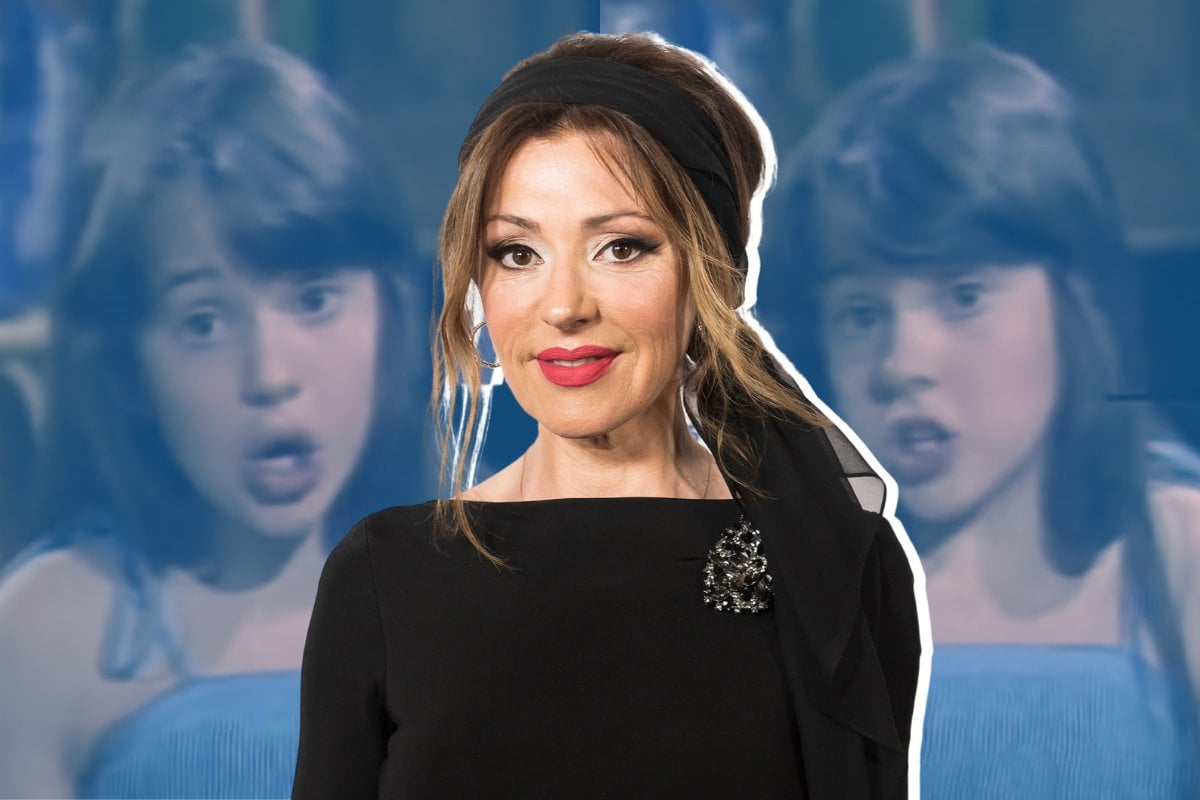 The singer burst onto our scenes on the children’s talent show Young Talent Time, where she would become the longest-serving cast member between 1974 and 1983.

"I just remember being an elated, young kid living the dream. You know, my life was so surreal at that time," Arena told Mamamia's Extraordinary Stories podcast.

For years, Arena sung and danced her way into Australia's hearts, unaware of just how popular she was becoming.

"I just found every moment exciting. I didn't have the intellectual capacity at that time to sit there and go, 'Oh, my God, I'm on national TV and everybody knows me.' I had no idea. All I was, was a kid, having fun dressing up dancing, singing, and just doing what I love."

Watch the trailer for MPlus, where you can get extra, closer content from Mamamia. Post continues after video.

But as she approached her 16th birthday, she knew - just like other contestants - her time on the hit show would inevitably come to an end.

"I did struggle with it. In the beginning I did. I was like... I’m 16, I've got to go. And it was confronting only because it had been so familiar and something I loved so much, but I really was equally ready to move on as well," she explained.

"I remember the time I made the decision to move on, it was it was a massive decision for me. Probably one of the hardest I've ever made in my life."

Looking back on her last ever show, the 53-year-old said, "It was an incredibly surreal day and I do remember that there was a real there was a sadness, unfortunately."

"I really felt the weight of leaving. And I also realised what a privilege it was to have been a part of that show."

"As soon as I stepped off that stage, I knew that my world would never be the same again, that a part of me would never be protected like that again. And I was right.

"And that was hard, knowing that I was leaving the shore and going out into open water. And in open waters, there's some pretty big fish. So I was like, well, two options here - float, tread water [and] stay alive, or just be mauled."

But despite her worries about the future, Arena kept quiet.

"I don't think I ever really did confide in anyone with those fears... I internalised a lot after that," she explained.

"I never really found myself in a situation where I could talk to somebody about it, or I wish now that I had it, I wish now I have spoken to a counsellor or somebody to say this is how I feel, you know, helped me through it. You know, today we would do that. But back then. No, we didn't do that. And I just soldiered on."

Listen to the trailer for Mamamia's latest season of Extraordinary Stories, all about Young Talent Time. Post continues below.

But finding success as an adult performer for the first time wasn't exactly easy, especially when people still viewed her as the child they knew from TV.

"The struggle was real to me because all of a sudden, I wanted to be accepted as an adult performer and I didn't really accept the fact that there really was a process that I had to go through in order to get to that place. I was rather impatient."

"I was really learning my craft in a very traditional manner," she said.

In 1990, she released her album Strong as Steel before releasing her hit 1994 album Don’t Ask - which remains one of the highest-selling Australian albums of all time.

She's made it into the ARIA Hall of Fame, sang 'The Flame’ at the Opening Ceremony of the Sydney 2000 Olympic Games and became the first Australian to be awarded the Knighthood of the French National Order Of Merit, for her contribution to French culture.

Looking back, she says her years on Young Talent Time, helped prepare her for her career in entertainment like nothing else.

"I actually don't think that a better platform or an apprenticeship in entertainment has ever existed since Young Talent Time. It was an extraordinary education, and inside insight into how a career works."

"It [was] absolutely exhausting. But we were kids having a great time... we were having the time of our lives."

Reply
Upvote
1 upvotes
@grumpier monster she went a bit far but also had some very valid points about the lack of support for the entertainment industry. There should be criticism about the lack of income support during these lockdowns.
F
fightofyourlife 10 months ago

Reply
Upvote
1 upvotes
@cat If she's so bothered about the lack of support for the arts, she should address her ire towards the federal government, who made the decision to leave the arts out of Job Keeper. Instead, it's somehow Dan Andrews' fault.
C
cat 10 months ago

Reply
Upvote
@fightofyourlife I used to feel sympathy for politicians getting blamed for things not in their jurisdiction, but Dan Andrews has been pretty happy to blame Gladys for the faults of the federal government and vice versa. Im not going to condemn Tina Arena for it when the politicians do it at every turn. And as an artist I don't even care whose fault it is any more, its just nice to hear someone acknowledge it.
Resources
Very Peri
News
General
Opinion
True Crime
Politics
Sport
Explainer
Entertainment
Celebrity
Reality TV
Movies
TV
Books
Rogue
Royal
Lifestyle
Beauty
Fashion
Weddings
Home
Wellness
Health
Fitness
Travel
Food
Family
Before The Bump
Pregnancy
Baby
Kids
Teens
School
Parent Opinion
Work & Money
Money
Finance
Career
Lady Startup