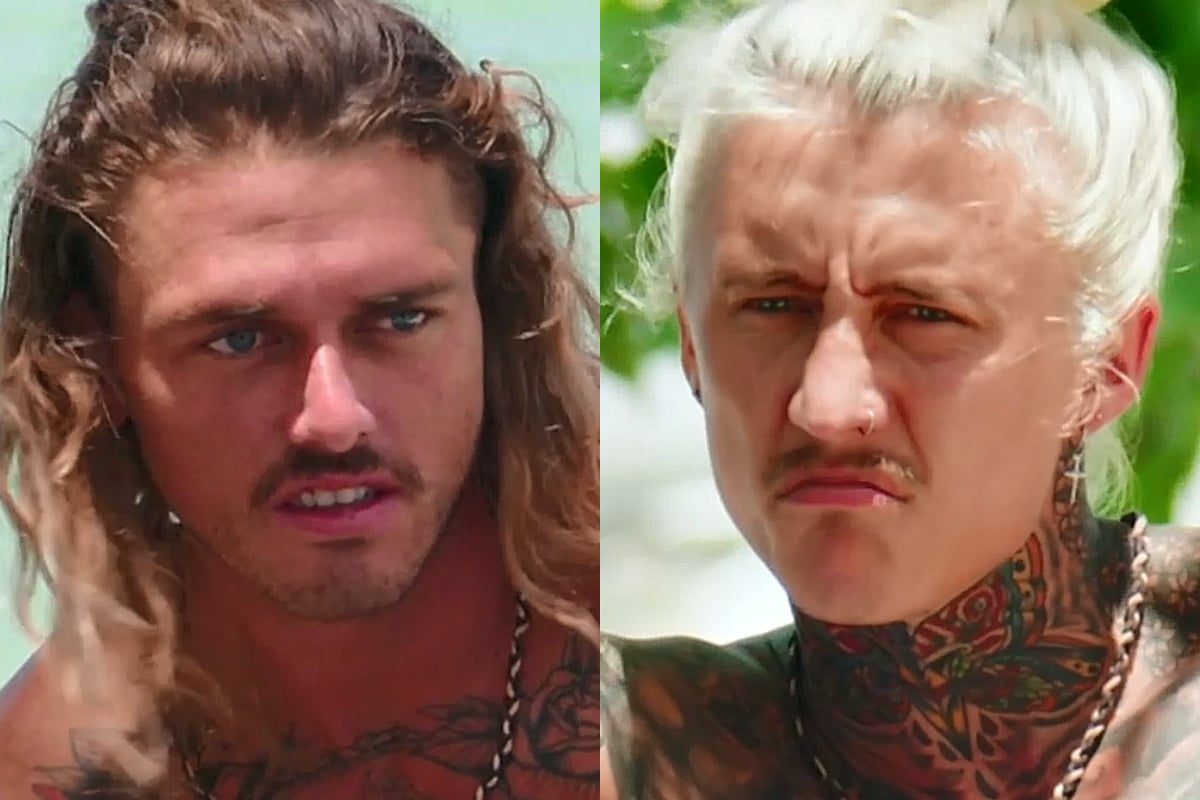 This week, Bachelor in Paradise delivered a masterclass in toxic masculinity.

We watched Ciarran Stott seethe when Matt Whyatt took his ex-girlfriend, Renee Barrett, on a date without his permission: "If he's got any sense of bro code—and he wants to be my mate—he should've pulled me away for a chat."

We watched Ciarran's hulking friend, Timm Hanly, spit insults in solidarity when he learned what had occurred: "What a f***ing dog... It made me sick in the guts, bro... F*** that!"

And we watched all this knowing that, just a few episodes prior, Ciarran had pursued Renee's friend, Jessica Brody, without reservation.

These are two men who've been hamstrung by a culture that champions an incredibly narrow, repressive version of masculinity; one that tells them that 'real' men are aggressive and possessive; one that holds them to a 'code' of behaviour that prioritises pride above all else.

This 'bro code' (or "bros before hoes", as it's often pithily put) tells them that to date your friend's ex-partner is an unforgivable betrayal, a low act. It makes you no better than an animal — "a f***ing dog", "f***ing rat" or a "snake", as Timm characterised Matt.

Naturally, the woman's perspective doesn't even factor in. She is the object in the scenario, the thing that was stolen and used against you.

That's why, in Ciarran's eyes, it's a cardinal sin to date a friend's ex but dating an ex's friend... well, "it is what it is."

In Paradise this week, Matt pointed out the realities of the situation: Renee and Ciarran are not together, all parties are single, and all parties are on A DATING SHOW.

But beyond that, there's been an unsettling silence from the male cast members.

Thankfully, for the viewers' sake, many of the women have been able to fill the void.

Alisha Aitken-Radburn eye-rolled at Ciarran treating Renee like property: "Ciarran has just made it very apparent to everyone in Paradise that he doesn’t want anyone touching anything that he has previously touched."

And Renee has scoffed at Ciarran's attempts to set rules on her behalf: "He can do what he wants, but I’m not allowed to do what I want. It's absolutely bullsh*t. I think I deserve to be happy, and if Matt taking me on this date today makes me happy then I'm bloody doing it."

We can only hope that the other men have uttered similar sentiments that haven't made the editor's cut. The alternative is that they're comfortable with Ciarran and Timm's toxic nonsense or, at least, not uncomfortable enough to call it out.

Perhaps that will come. Perhaps someone will be bold and sensical enough to say something. Because that's the thing about codes, fellas: they can be rewritten. And no, we can't do this one for you.

Reply
Upvote
3 upvotes
What's so achingly disappointing about this is in just November gone we were celebrating these men for breaking the toxic masculinity mould.
https://www.mamamia.com.au/bachelorette-2019-timm/
Guess they either hid it well, or got a hero edit they didn't deserve.
flyingdale flier 4 months ago