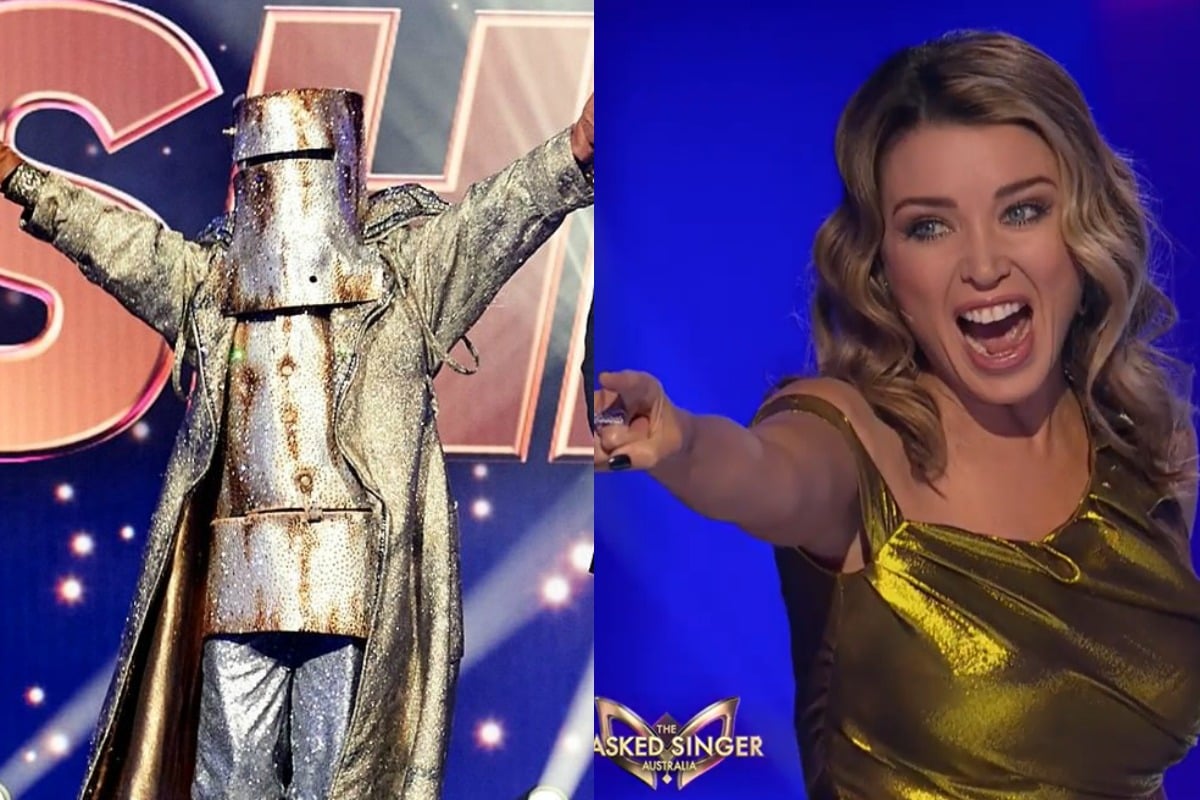 Well folks, this. is it.

After spending the past five weeks watching a lifesize puppet sing on national TV, yelling 'take it off' in our lounge rooms and diving deep into fan theories (which he we admittedly got way too obsessed with), we have finally arrived at The Masked Singer finale.

And we're bloody excited about it. But mostly to be proven right about Kate Miller-Heidke who we all know 100% undoubtedly is the Queen.

Watch the Queen's final performance on The Masked Singer. Post continues below.

While we obviously already know the not-so-secret identities of the final three celebs, we’ve come too far to not watch The Queen, Frillneck and Bushranger get unmasked. And Channel 10 is not going to let COVID-19 get in the way.

First up, was Frillneck who kicked off the night with his performance of 'Devil Inside' by INXS, followed by the Queen's gravity defying rendition of 'I Will Survive' by Gloria Gaynor. Last but not least, Bushranger took to the stage singing 'When Love Takes Over' by David Guetta. And the judges FINALLY﻿ clued on to the celebs we've been guessing all along.

Then came the moment we've been waiting for. The final unveiling.

Osher revealed Frillneck did not receive a rose the most votes and came in third. And as suspected, it was of course Eddie Perfect.

The Queen surprisingly came in second but not-so-surprisingly was in fact, Kate Miller-Heidke. In the end, Bushranger took home the victory. And yes, she was none other than Neighbours actress Bonnie Anderson.

Here's how Australia reacted to the final three reveals.

Hats off to #MaskedSingerAU - the judges are in Sydney, Melbourne & NZ but it looks flawless. That’s impressive 👏🏻 pic.twitter.com/BirN3Z5OYK

I’m guessing at least 50 ad breaks till we know the winner. #MaskedSingerAU

It must be a relief for the judges to finally guess who I bet they knew it was all along.
#MaskedSingerAU pic.twitter.com/bDQnSsVcPS

Me: but...but Kate Miller-Heidke was nominated for 13 Arias and she represented us at Eurovision...
Hubby: well maybe she’s not a good singer
Me:
#MaskedSingerAU pic.twitter.com/DqT579di1w

Kate Miller-Heidke not winning the Masked Singer? Is there anything else 2020 wants to throw at us? #maskedsingerau pic.twitter.com/4vuSgFU3us

Do we just live in a world where Kate Miller-Heidke gives us 800% and never wins?! #MaskedSinger#MaskedSingerAU pic.twitter.com/miB66WdK4n

The judges being 50/50 divided between Jess Mauboy and Bonnie Anderson is me right now fighting with my inner self. #MaskedSingerAU

What do you mean it’s not Jessica Mauboy? #MaskedSingerAU pic.twitter.com/vsyIoLnoQ1

People over 40 that haven't watched Neighbours for years. #MaskedSingerAU pic.twitter.com/XxznvXH6X9

The faces of everyone who thought Bushranger was Jess Mauboy #MaskedSingerAU pic.twitter.com/dEJI3Tc6PI

What did you think of The Masked Signer final? Let us know in the comments below.