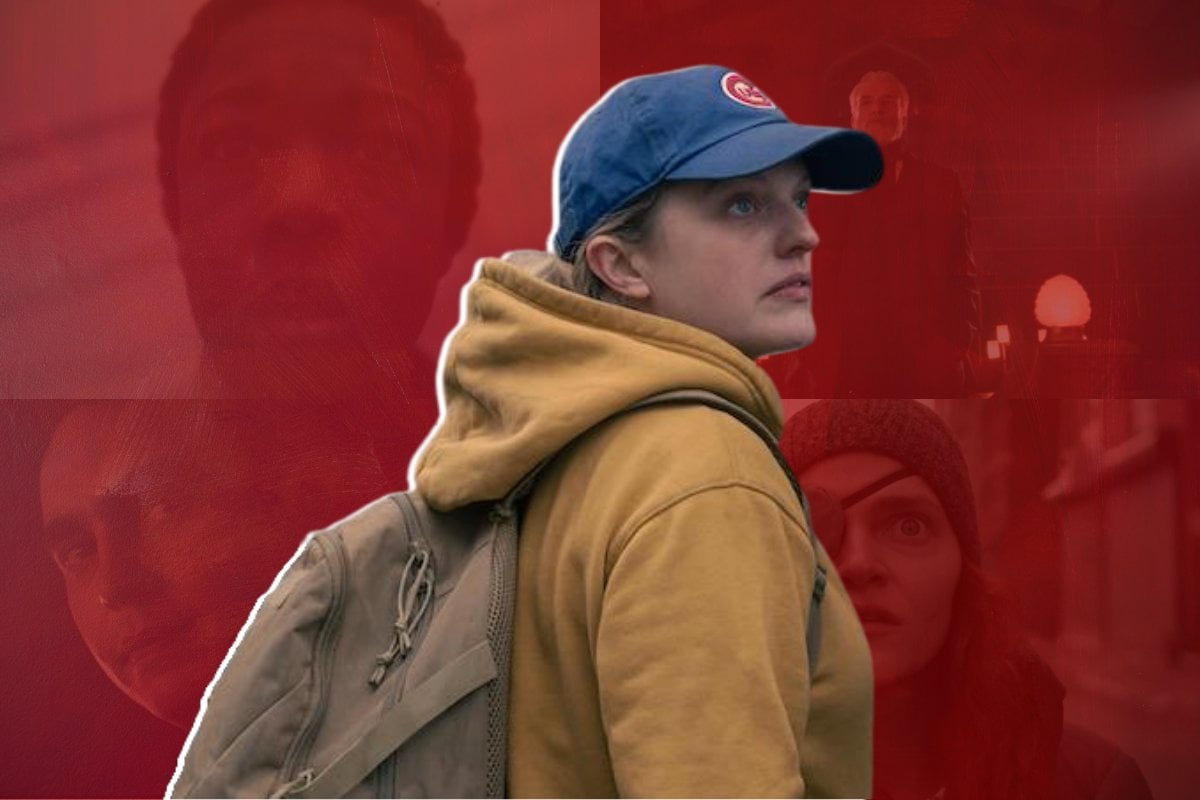 Well, Steven’s still a rapist. Even if he and Janine have convinced themselves otherwise.

The former-Handmaids have settled into life in Chicago, and besides the constant sounds of bombs going off outside, it all seems a bit dull.

But how good is it to get out of Gilead and expand this f**ked up world a little further?!

Steven and the rebels are looking to trade food for fuel, bullets and batteries across town, and June manages to get herself involved, because of course she does.

Steven tells June she can only come if she does exactly as he says. She says she will, and I cackle. As if.

At the Red Center Aunt Lydia is walking on a treadmill and pining over a group of new arrivals in red cloaks.

She's been taken off torturing-Handmaid-duty and forced into whatever retirement looks like for a loyal Aunt who was also in charge of too many dead or missing human incubators, and she's really mad about it. 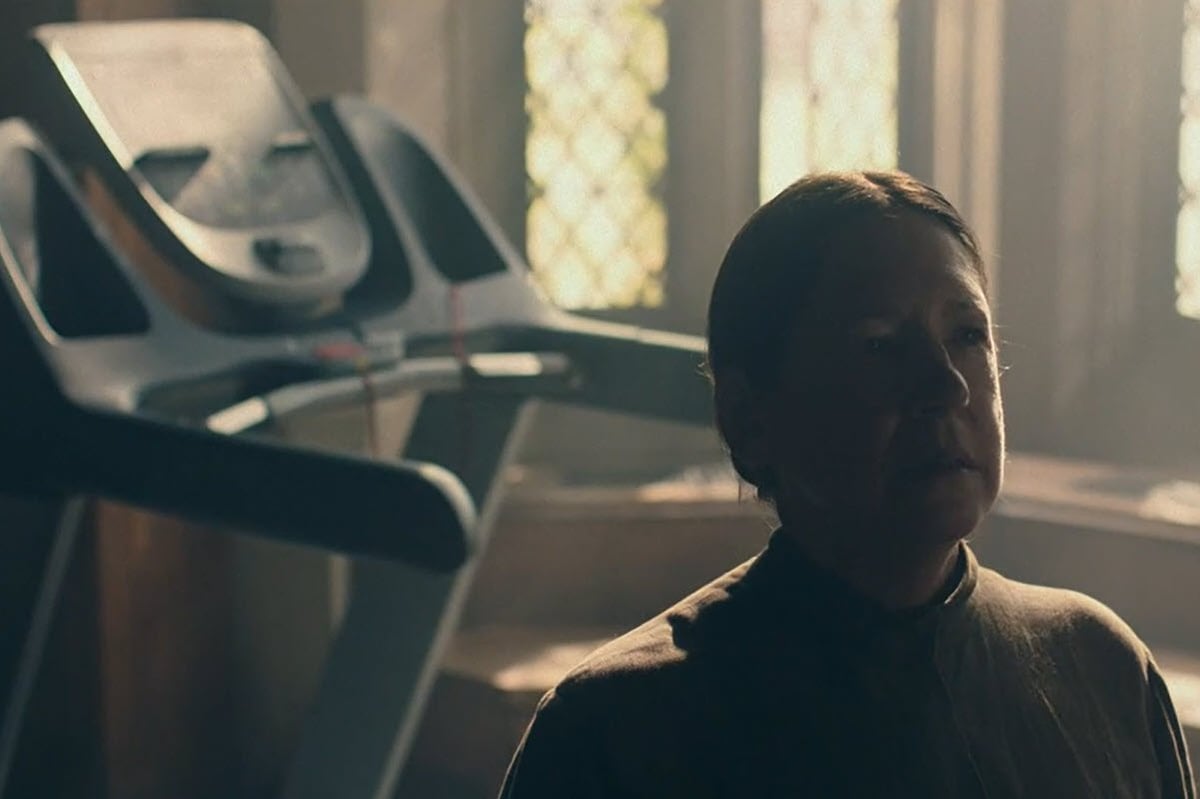 I really enjoy how when she got off the treadmill, it said "workout paused, Blessed Day." Image: SBS.

Over at the Commanders Council, whom I've come to refer to as the council of tiny d*cks, Commander Lawrence is trying to get the others to agree to a temporary ceasefire on the borders of Chicago, California and Texas.

It'll allow aid groups to go in and offer help and be seen as a gesture of goodwill to the international community, which will hopefully lead to them easing sanctions that are choking Gilead's economy. 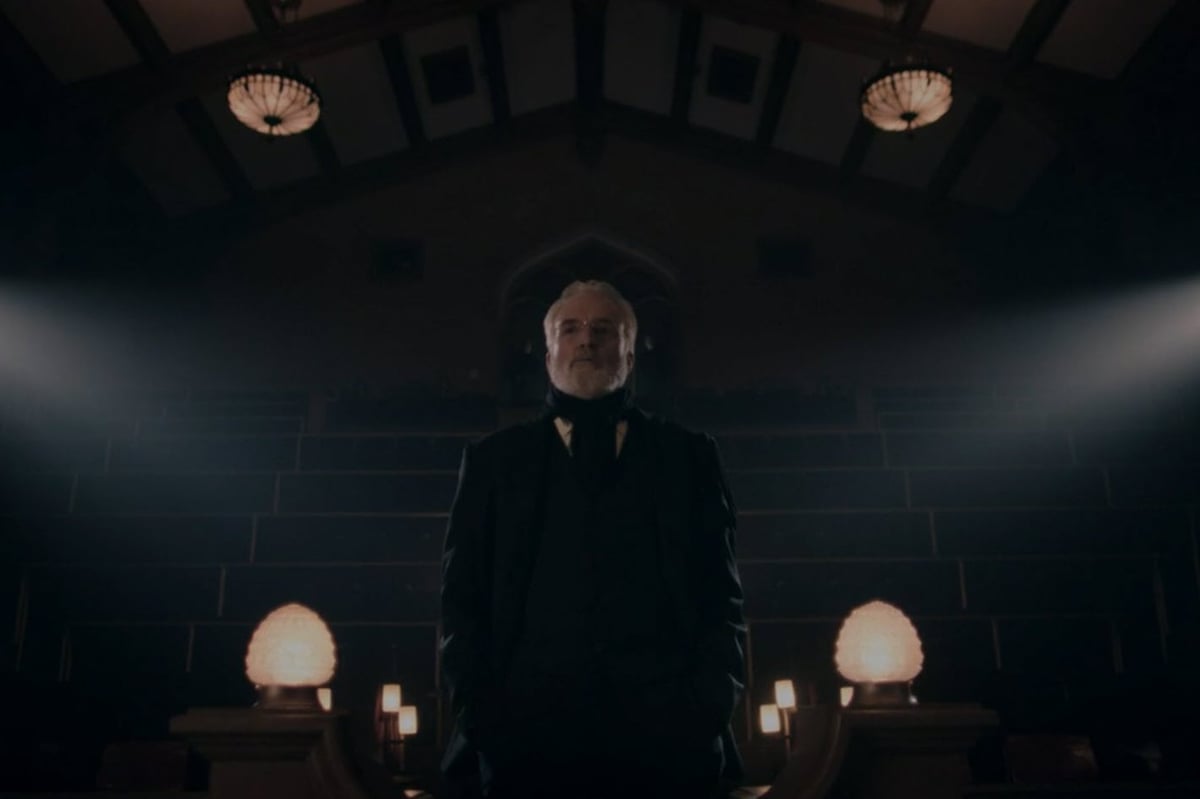 Somehow, Nick has become powerful enough in his short time as a Commander to join the table and he's the only one who seems to agree with Joseph's plan. But he and his eyebrows are cowardly, refusing to be the only hand in favour of the motion.

After a vote, Joseph tells Nick a ceasefire could help June, which gives him and his eyebrows something to ponder.

On the way to the trading post, June, Janine, Steven and the rebels come across the bodies of real resistance members, called Nighthawks.

Steven says Nighthawks don't care if they die, they just want to kill soldiers. June gets a glisten in her eye because same. 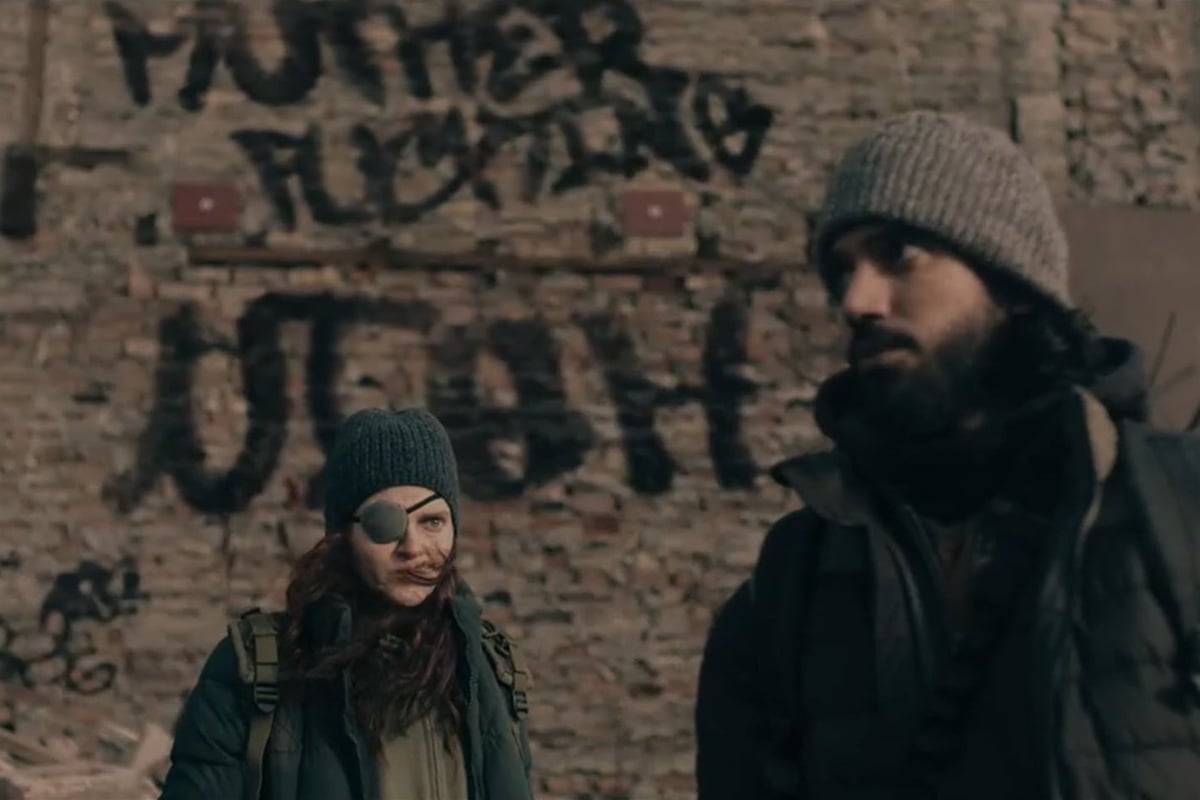 Soon, the group have to hide from a Gilead patrol in an abandoned building. The soldiers look inside, but don't see them.

June hisses at Steven that he has a clear shot, and why doesn't he shoot one now??? Years into her resistance and June still doesn't understand that 'all guns blazing' is not a great strategy.

Steven's right when he says shooting the soldier would just lead to more soldiers on the ground, making all their lives infinitely harder going forward.

They go make their trades, and Janine tries to palm off her Handmaid cloak for a baseball cap, because Steven loves baseball. Sigh.

The trader won't take it and June takes pity, offering her Handmaid cloak too.

I can understand never wanting to see the cloaks again, but they're heavy-duty, warm and in good condition - worth way more than just a stupid hat. Ever heard of haggling, June?

In Boston, Joseph has a very unexpected visitor; Aunt Lydia.

Remember when Emily stabbed her and pushed her down the stairs of this very house? Good times.

This time, she is here to blackmail him. She has sources who can prove his involvement in Commander Winslow's murder, and has "testaments" (shout out to Margaret Atwood's Handmaid's Tale sequel) to his many abuses of power.

She'll turn him in, unless he arranges for her to return to her role torturing young, fertile women.

He agrees after she says she has intel on all the other Commanders too. With her info, he can regain his seat at the council table.

"Let's fix this country, let's make things right again, together," he tells her. 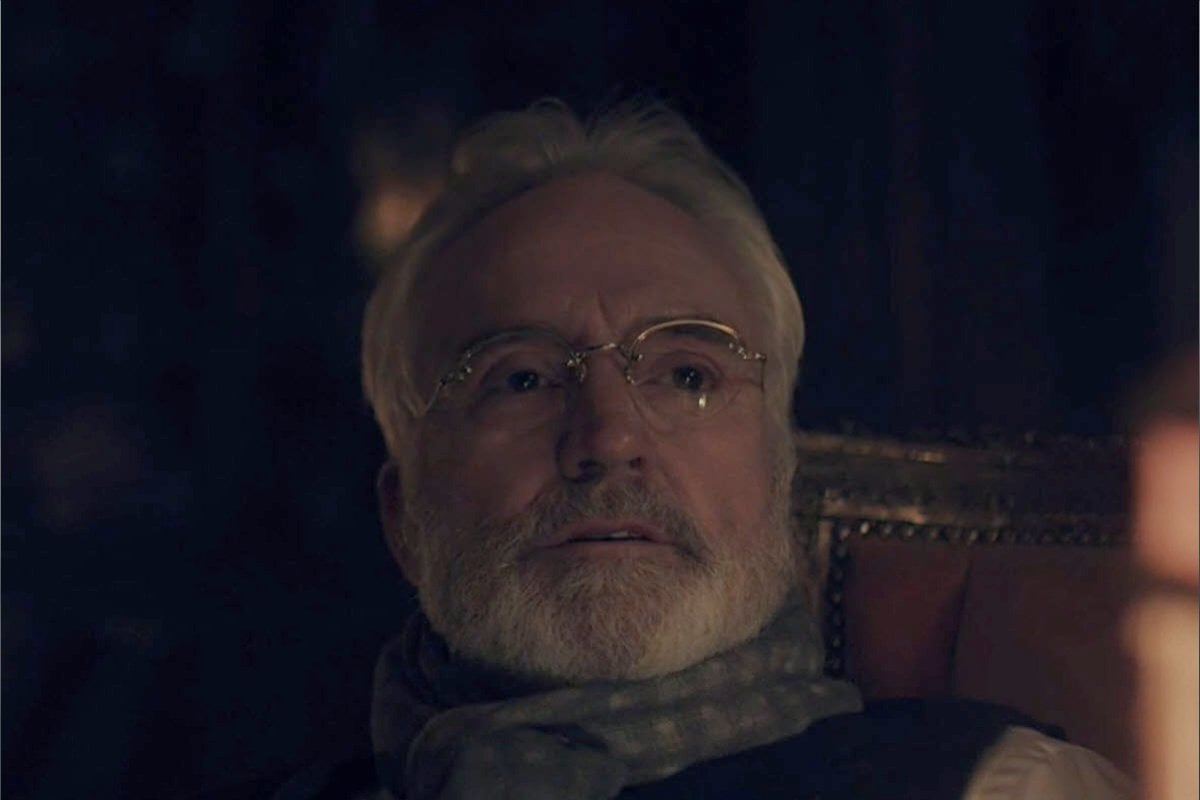 Okay, Joseph is the most confusing person on this show. He really wants his power back, but is it to save himself or help June and take Gilead down from the inside?

YOU ARE INFURIATING, DUDE.

Back at the rebel base, June makes her plan clear: She's going to find the Nighthawks.

She wants Janine to come too, but Janine's drunk the Kool-Aid and wants to stay here with Steven.

June tells her to come along or stay and be "Ofsteven" and it's brutal, but true. Janine can think she’s having a consensual relationship all she wants, but Steven is a piece of s*** who coerced her into it.

Back east, Nick and his eyebrows are putting his former Eye knowledge to good use, arranging two Marthas to be delivered to a spot where somehow, no other Commaders/Aunts/other pesky Gilead loyalists see them.

I guess if he can kiss a Handmaid for seemingly hours a few eps back without raising eyebrows... ¯\_(ツ)_/¯

He wants the Marthas information on June, and one is straight up like "f**k June Osborne". I enjoy that a lot.

The other Martha tells him two Handmaids were seen entering Chicago a week ago.

Nick and his eyebrows are… pleased, and he's now willing to help Joseph with his ceasefire plan. Who cares about civilians besides your girlfriend, aye bro?

June and Janine have a pretty awkward goodbye, until Janine gives her the cap she had planned to give Steven, 'to remember her by'. 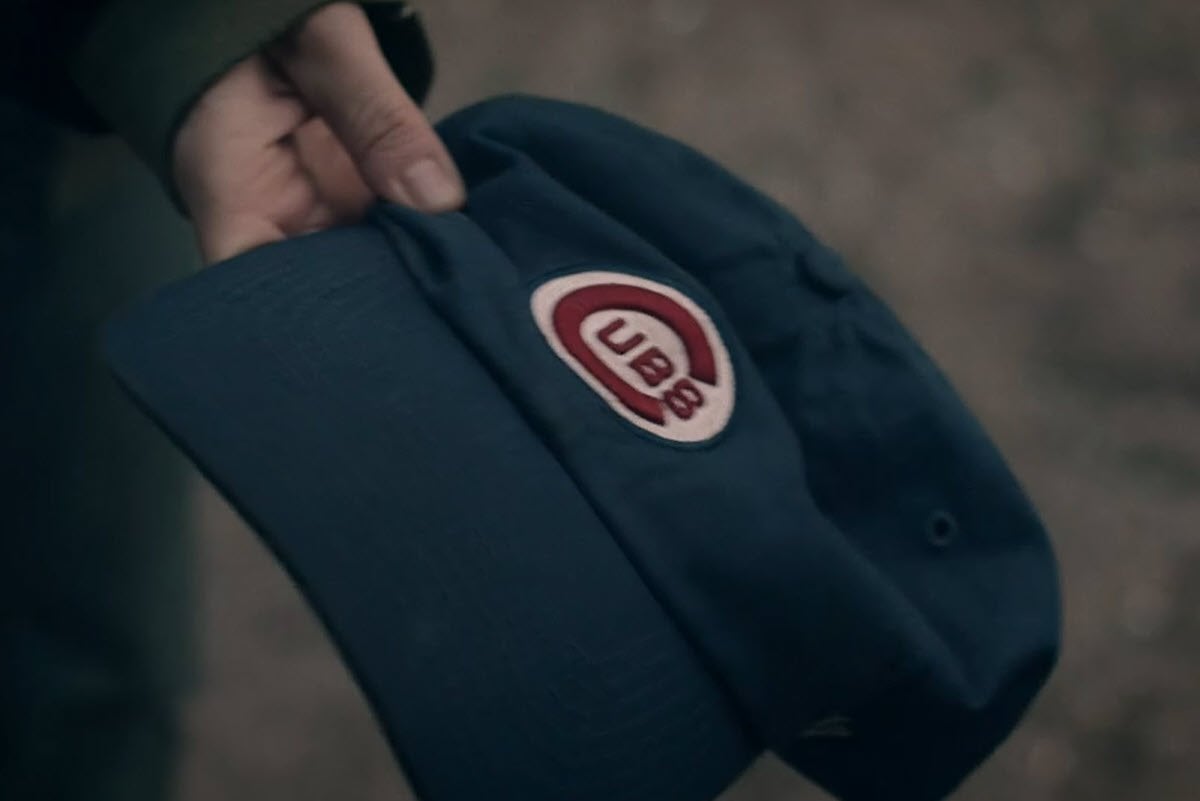 I Googled the Chicago Cubs motto and it's 'Cub Together' and now I'm crying. Image: SBS.

"How could I forget you?" June asks, and goes on her way.

Meanwhile, June is walking alone down the streets of a broken city. Not for long though, as Janine arrives.

"I feel safer when we're together," she explains. "Handmaids always walk in twos, remember?"

And just like that, Boston's council of tiny d*cks - which once again includes Joseph - decides to go along with his plan for a 24-hour ceasefire. With one caveat: They want Nick to arrange a major bombing of each front right before it begins.

Just when you think you can't hate them anymore than you already do.

This makes no sense, really. It's just a classic Gilead power trip. If economic sanctions were tough before, wait till the world reacts to this.

Nick objects because of the potential civilian casualties, to which another Commander says "you can't hunt the roaches while they're in the walls". 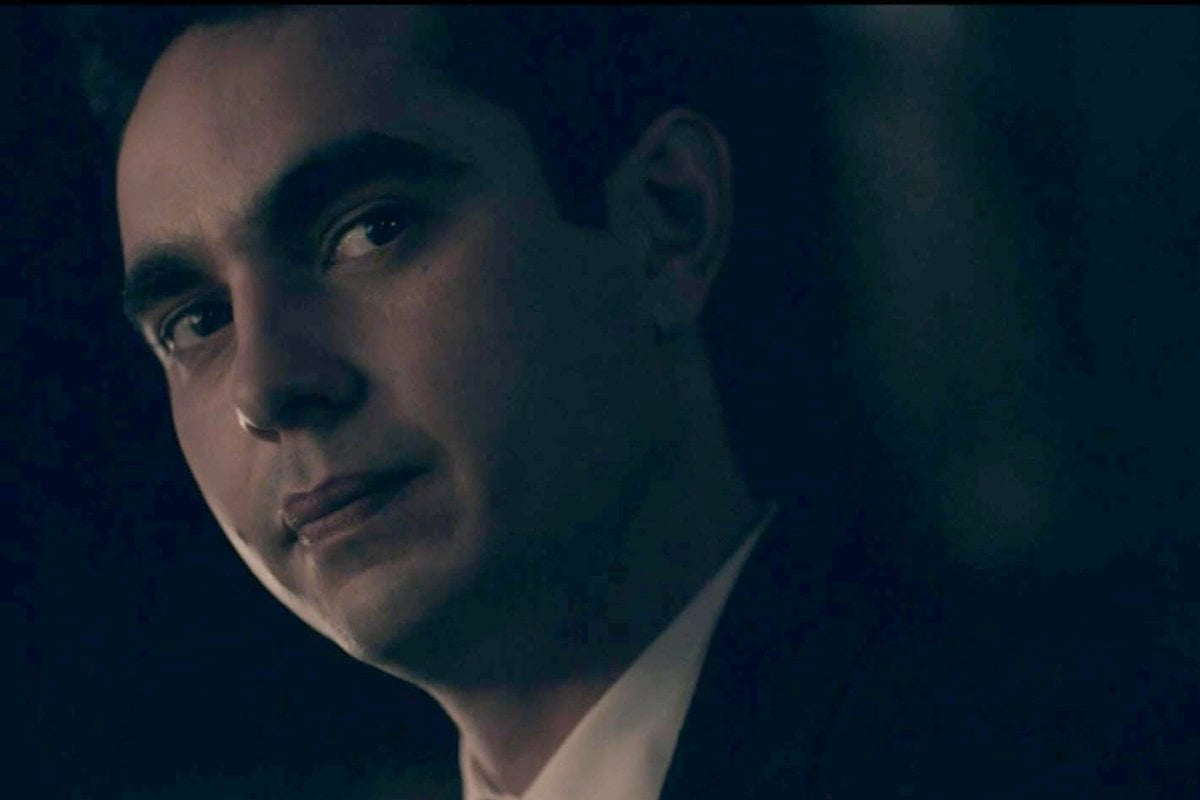 Joseph is onboard with the plan and Nick's eyebrows realise he's got no other option.

The streets of Chicago are deserted.

June and Janine reach a checkpoint with no sign of soldiers. There's food though, making it clear the Gilead troops left in a hurry. 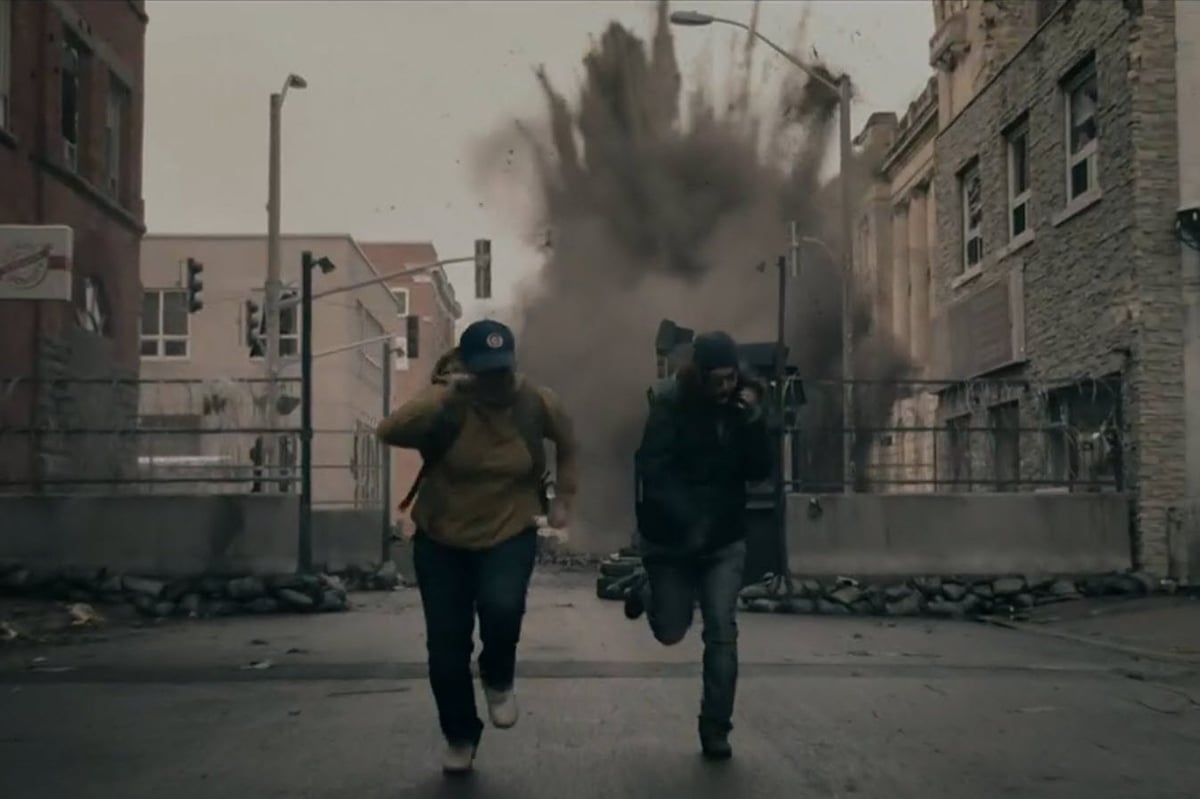 They run, but it's pointless. Bombs fall. Everything goes black.

A cover version of Coldplay’s 'Fix You' starts playing quite… aggressively as June wakes up. It's a weird song choice.

June gets up, searching for her friend. June has the strongest plot armour I've ever seen and is mostly fine, but Janine??? JANINE?? IS SHE OKAY???

Dust settles and debris is moved, and I'm here singing 'stuck in reverrrrrrrrrseeee' and sobbing.

An aid worker emerges through the smoke and OHHHH MYYYY GODDDDDD IT'S MOIRA!!!!!!! 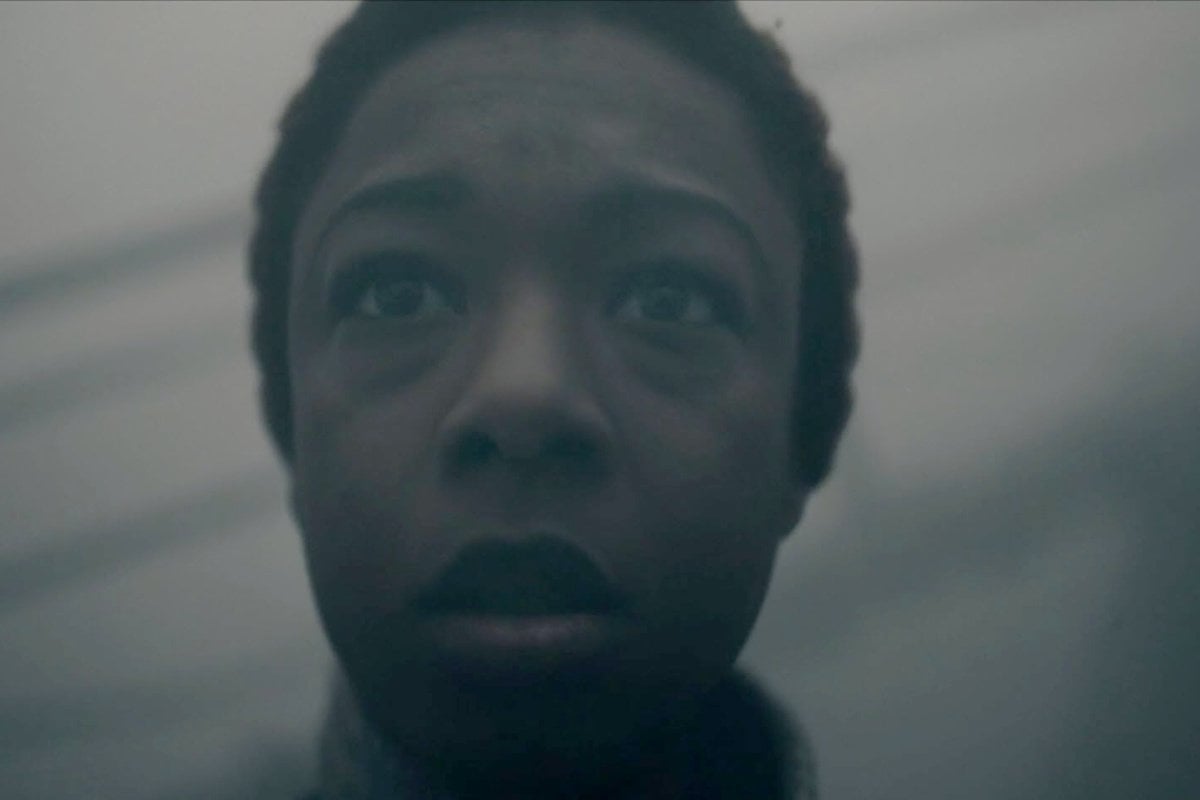 AND WE ALL KNOW THE HANDMAID'S TALE NEVER BRINGS ~HAPPY~ TEARS.

I don't want to jinx anything but surely, surely, this must mean real, actual freedom?