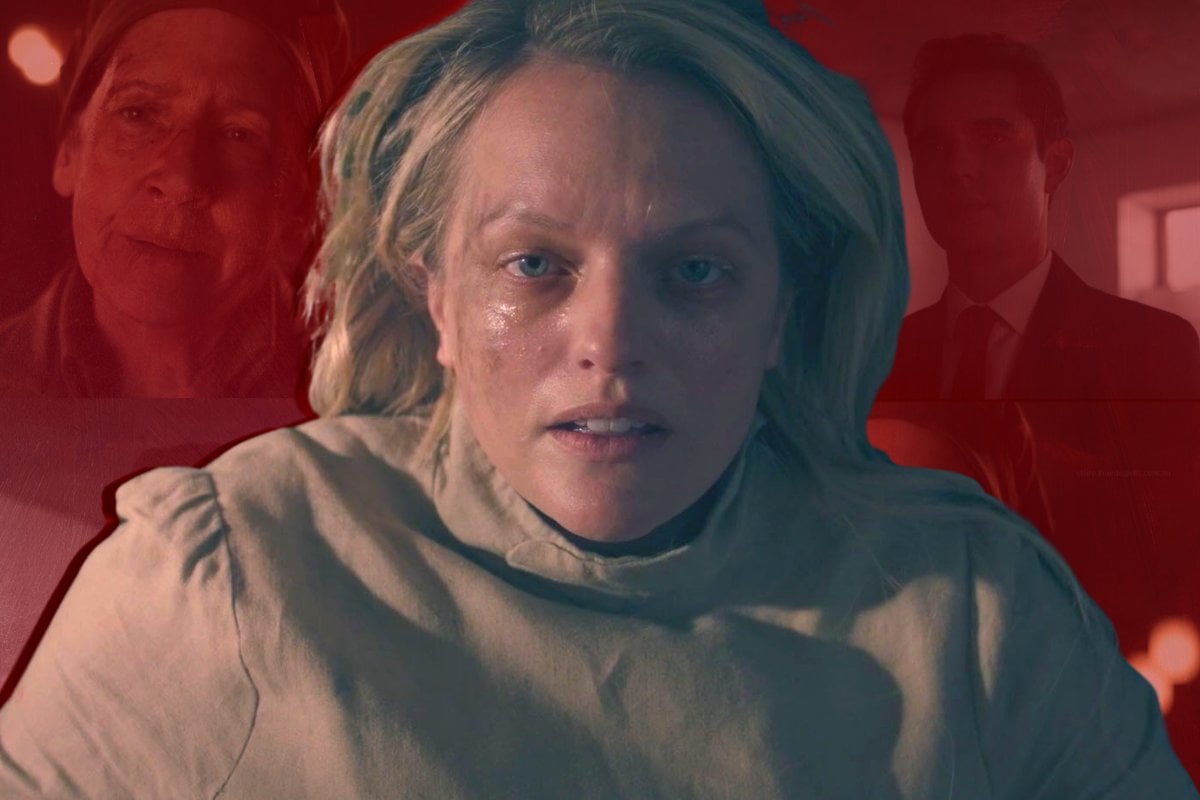 Missed a The Handmaid's Tale recap? You can check out Mamamia's recaps here.

There is absolutely no way The Handmaid's Tale was going to kill off its main protagonist, so she is now (un)officially onto her 156th life.

June's Handmaid pals are tending to her injuries, urgently needing to heck the heck out of Gilead. They've just helped smuggle 86 children to Canada, and sh*ts about to go down.

Watch: The season four trailer gives us a look at what else to expect. Post continues below video.

Miraculously, they find a safe building (it looks like a... budget Sephora?) with a curling iron, which angel Janine jams right onto the hole in June's abdomen. Ouch.

The group are escorted to a farm in rural Massachusetts by a friendly Guardian who stuffs them under the seats of his truck. The truck is searched, and Brianna is breathing louder than me during my twice-yearly trip to the gym, but somehow they're undiscovered.

We're now in Canada, where the Waterfords are suffering for their war crimes at a day spa/prison. They're called into a meeting... together... without any lawyers... and Tuello a.k.a Mr Coconuts and Treason tells them about the Marthas and children on the flight.

Serena's like, "their poor families", as in the Commanders and Wives who stole these kids from their actual families, because she's gunning for the Guinness World Record for most backflips. Fred just does weird things with his eyebrows.

Mr Coconuts and Treason tells them June is behind it all, which gives Fred an eye twitch not unlike those villains at the end of an episode of Scooby Doo, who reckon they'd have gotten away with it if it wasn't for a meddling, undying Handmaid.

Across the border, the Handmaids have been dropped off to walk the final kilometres to the farm. June goes alone at first, to check it's legit, because of course she does.

By the time she hears the words 'You're safe' she keels over because of her GUNSHOT WOUND and plot requirement that she do all the hard yards. She is on the verge of death, but Mrs Esther Keyes, the Wife of the farm who also happens to be a literal 14-year-old child, is like 'I had dreams we killed people together'. Alma's face says it all. 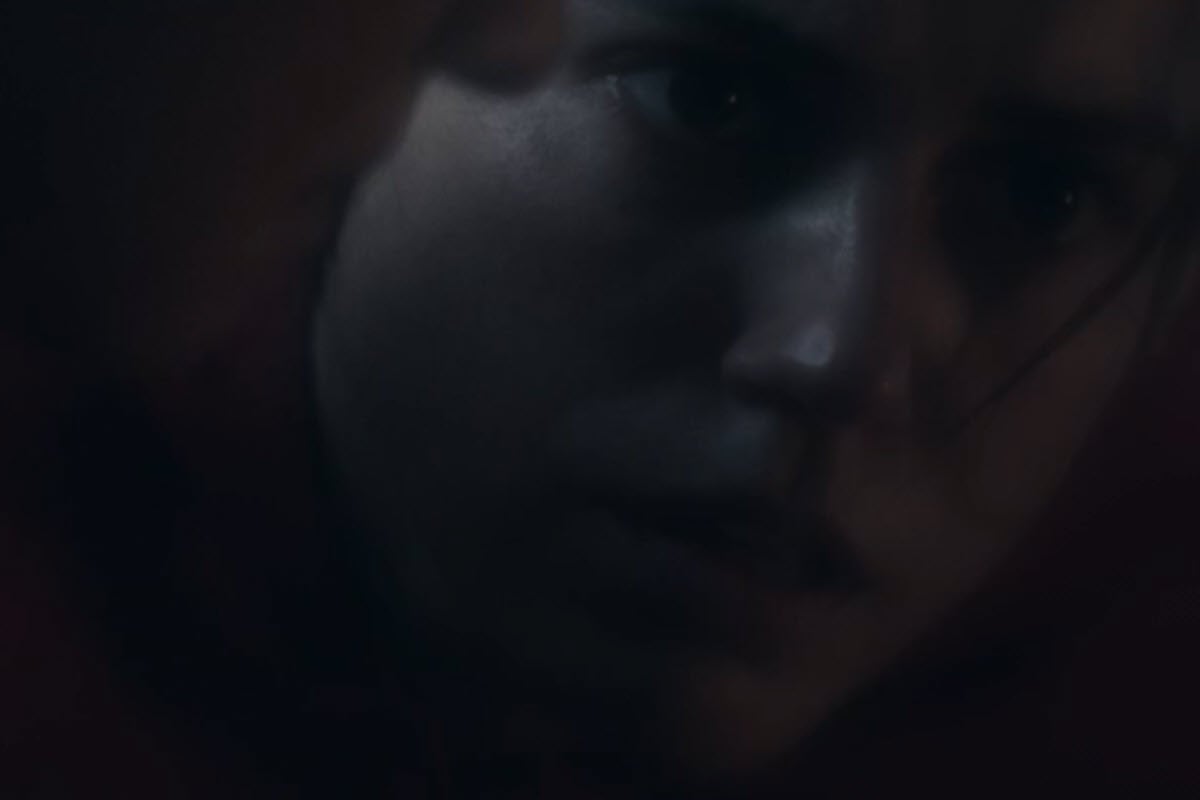 Aunt Lydia hasn't been to the day spa. Instead, she's spent 19 days being interrogated, perhaps with some of her own favourite forms of punishment.

The Council of Commanders are pissed because they think she should've done more to prevent a group of rogue Handmaids from being able to plan and execute the plan under her nose. I mean, fair point.

She sasses them a little bit, but is able to return to her post. Given all the dissidents, Gilead's probably running a bit low on loyal, torturous Aunts.

Plus, Aunt Lydia's got tunnel vision for finding and punishing "Delilah" June (Delilah was a Bible figure who entrapped a 'strong' man and betrayed him to his enemies, which somewhat fits, besides the fact these Gilead men are actually weak af). 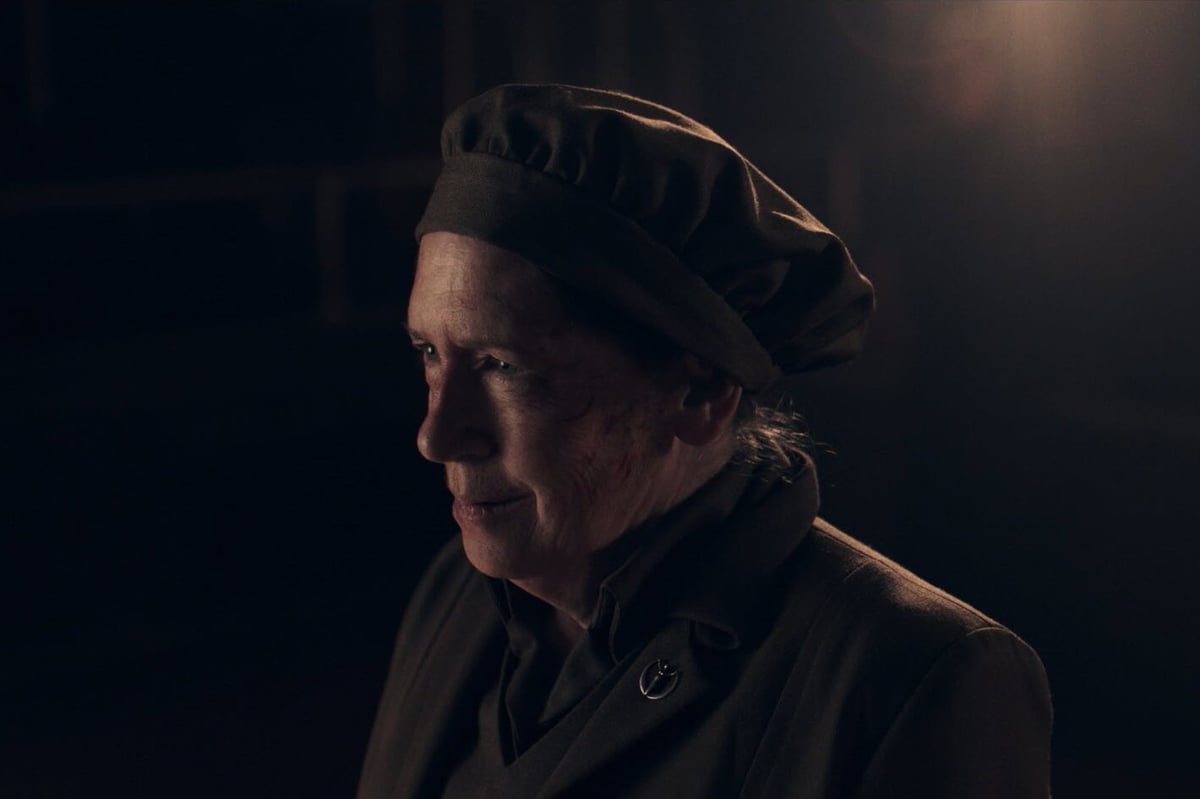 CAN YOU IDIOT MEN FIND ME JUNE ALREADY OR DO I HAVE TO DO IT MYSELF FFS. Image: SBS.

June is awake, using fruit mould to tidy her gunshot wound. Okey dokey. Angel Janine has made friends with a pig she's called Mr Darcy and Alma is doing a pretty average job at being lookout.

June wanders around the farmhouse belonging to Commander Keyes. He's at least 80, with a failing memory and no idea how weird it is that his farm has suddenly become home to a bunch of new 'Marthas'.

The place is effectively run by Esther, who is bloodthirsty and keen to revenge on Gilead. She's impatient, which honestly makes sense. This is season four.

Commander Lawrence has been arrested too, but he's in a Gilead library rather than a Canadian day spa.

Nick and his glorious eyebrows are back. He's now a commander who has come to thank Joseph for his service to Gilead. His service like letting a cohort of Marthas and Handmaids use his home as the base for smuggling 86 children out of the country? Yeah, Joseph is as good as dead.

Except he's smart. He's the brains of Gilead's economy and without him, all you're left with is a bunch of skeevy, trigger-happy men who want to invade Canada. Joseph tells Nick he could help Gilead work diplomatically instead. Plus, he knows Nick's weak spot. "It's June's legacy," he says. 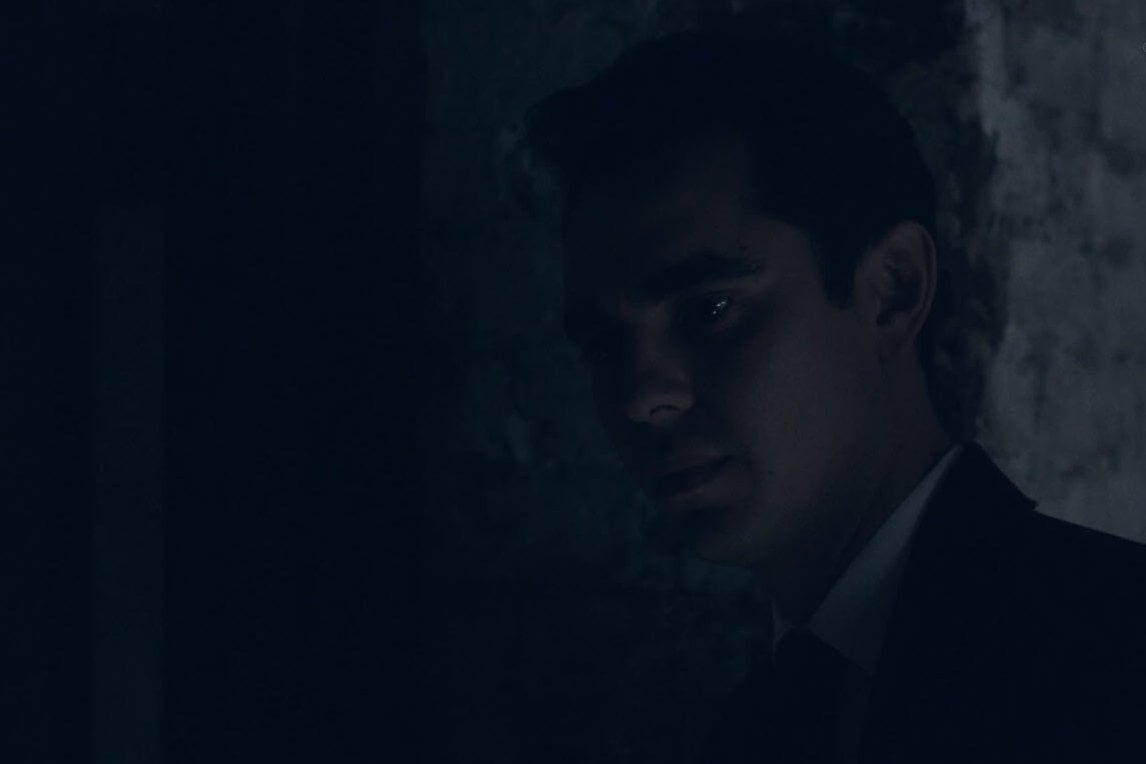 I'm just really pleased Max Minghella and his eyebrows are back. Image: SBS.

Back on the farm, poor Janine has to say goodbye to Mr Darcy, because Handmaids gotta eat. They all have dinner, and Esther forces Janine to eat the pork. What in the actual hell.

June sprays Esther for it, yelling about how Janine - and all the handmaids - have been beaten and tortured for years. Esther understands, because "wives have bad things too", in her case, being raped again and again by a series of Guardians, Eyes and other men who visit the farmhouse. She wants revenge.

The next morning, Joseph is interrupted by Nick and a group of Guardians, and he for sure thinks he's about to be marched straight for the wall.

He's taken to a room with a single dentist's chair. It looks for sure like a torture chamber, but Nick tells him he's convinced the other commanders to take Joseph on as an advisor. And he's about to get a fresh shave. 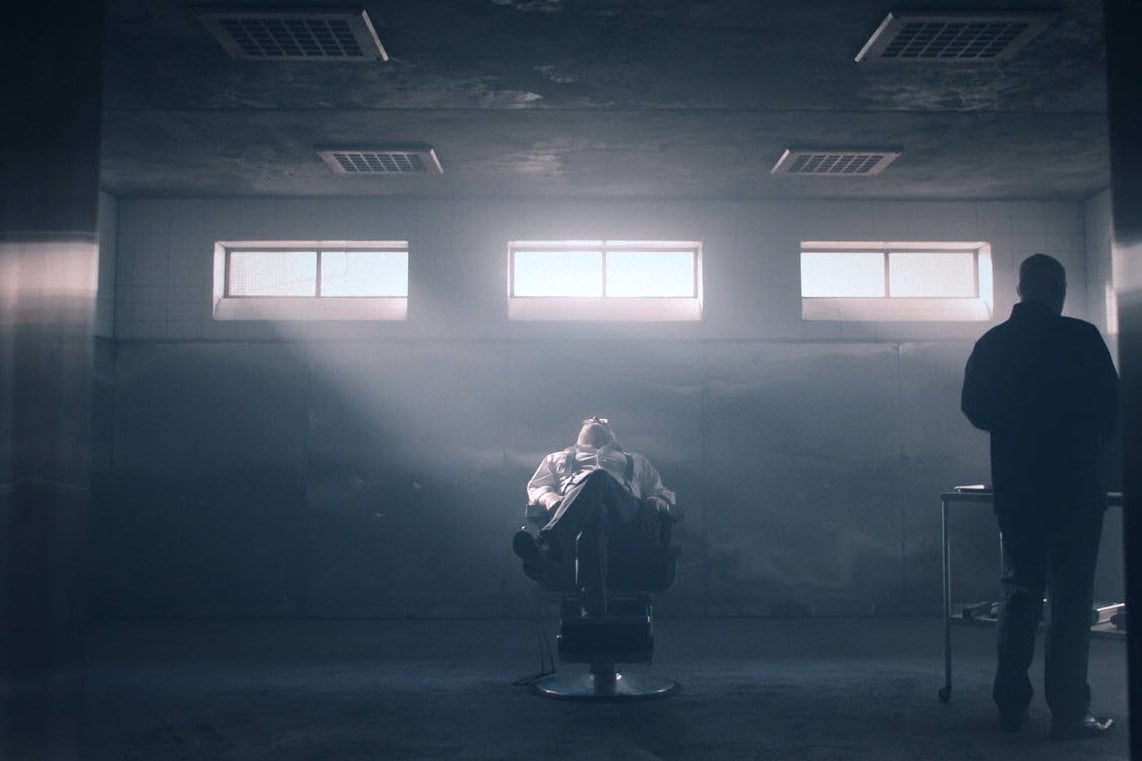 Lol did you see his little jig to the chair? Image: SBS.

Over at the farm, June almost stabs Mr Keyes. She's only interrupted by a commotion outside, as Esther has spotted a Guardian "trespassing" on her farm.

There's the simple option of shooting him and dragging him down to the river, but June has other ideas.

Season one June would never, but season four June comes at the Guardian like she's Aunt goddamn Lydia.

"Girls, this man betrayed his own country," she says.

"The United States. He's a traitor. And this man raped a child, repeatedly. The punishment for these crimes is death." 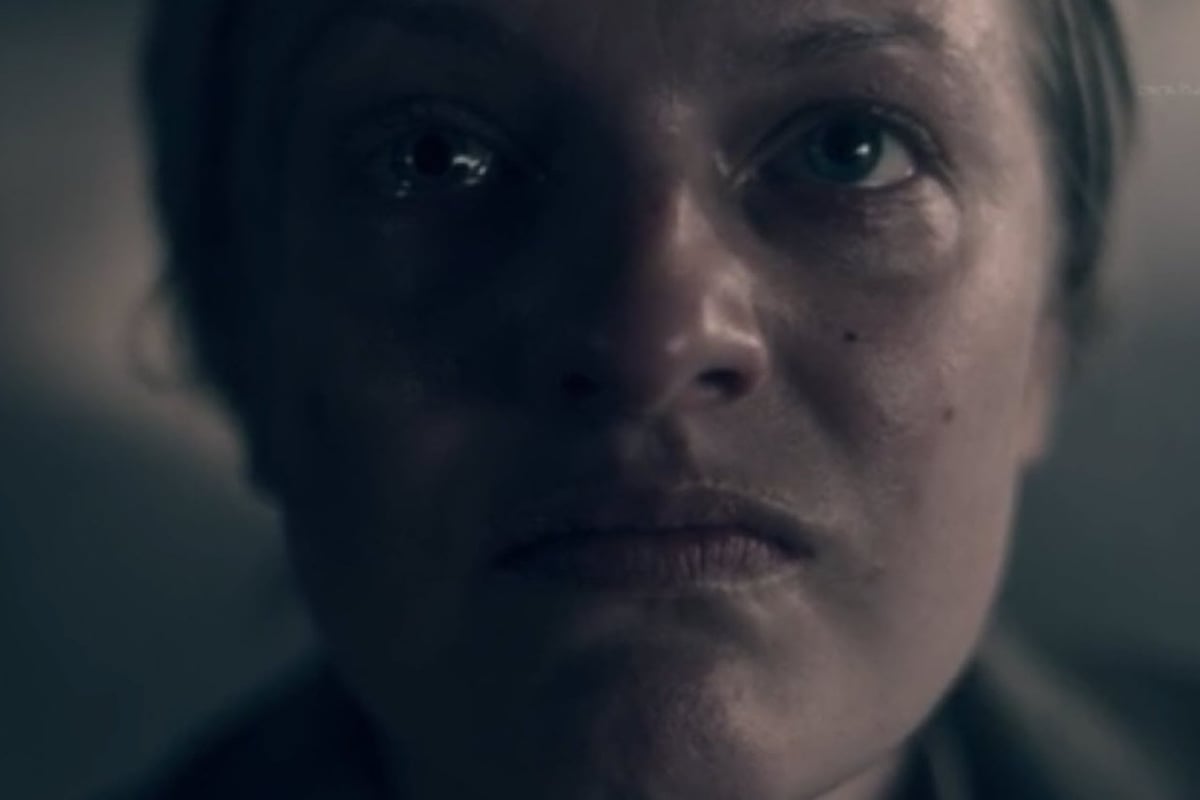 The impression is so on point that, surely in other circumstances, Aunt Lydia would be proud. June's so incensed by this man's crimes, she reads straight from the Gilead handbook.

She hands Esther the butcher’s knife, tells her to "make me proud" and walks away.

Welp. June's not just crossed the point of no return, she's leaped right over it. With a 14-year-old on her back.