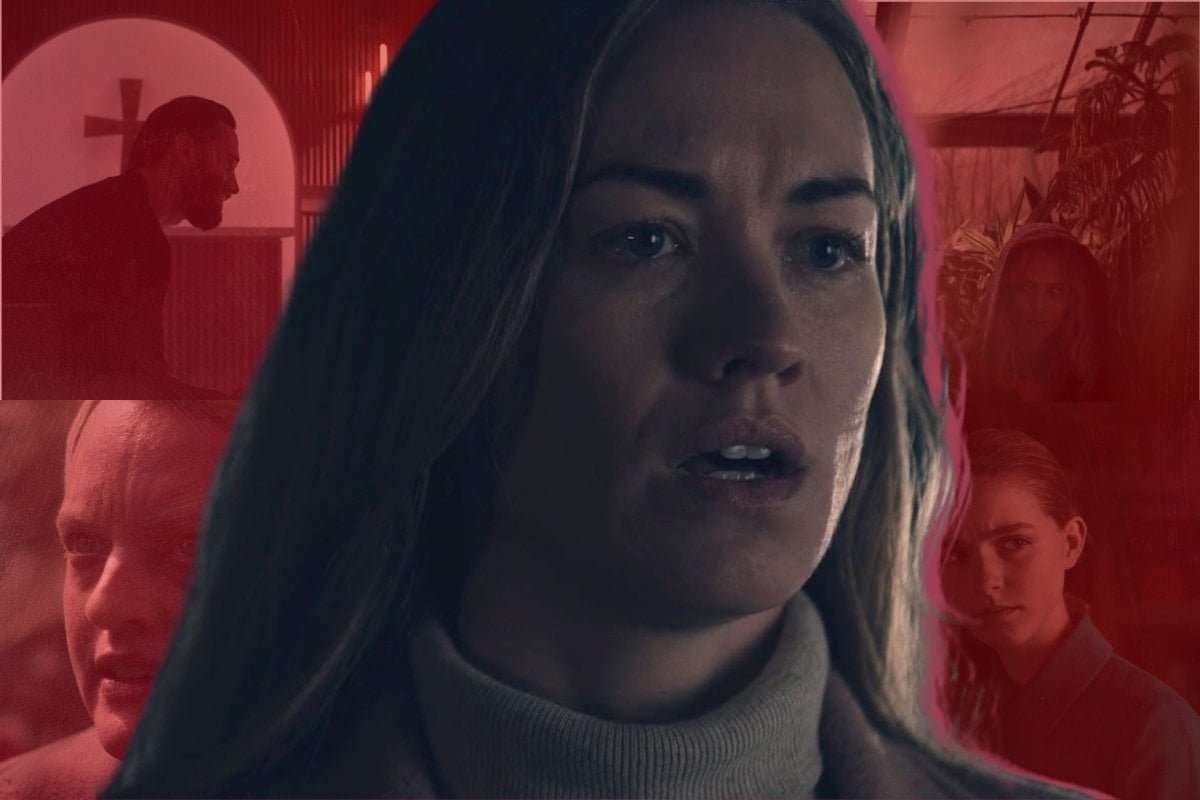 Missed a The Handmaid's Tale recap? You can check out Mamamia's recaps here.

Um, what are those pigs eating?

Guardians have turned up at the Keyes' farm, and June shepherds all the Handmaids into hiding before going to spy on what's happening. Classic June.

Esther and the guard are discussing the missing Guardian; the one June had Esther kill and whose body is currently being… taken care of. Esther says she hasn’t seen him, lol.

Watch: What else to expect from The Handmaid's Tale season four. Post continues below video.

With Guardians sniffing about, June decides it's time for the Handmaids to leave. Alma wants to go to the Republic of Texas, but another rundown farm down the road is probably more likely.

Oh no. In Canada, Luke is talking about his wife at a charity fundraiser for the Gilead refugees.

Rita is also there, and she's looking more nervous than she ever did breaking the laws of a totalitarian theocracy.

Rita praises June for making the 'Angel Flight' happen: "Gilead has a way of bringing out the worst in people," she says. "But in June it brought out the best."

No one must ever tell her about June's Aunt Lydia impression in episode one, okay?!

In the country formally known as the United States, the person who is willing to relocate the Handmaids from Esther's farm will only talk to June, so she's escorted to a nearby mansion.

It's another Jezabels brothel, and upon reaching the greenhouse, a mysterious, smoking woman named Daisy explains that the Angel Flight and Winslow's death - she knows that was June - has made others around the area more bold.

Tyres are being slashed, and someone blew up a checkpoint. People are trying to take down Gilead, and June's practically their Saint. That's going to do wonders for her hero complex. 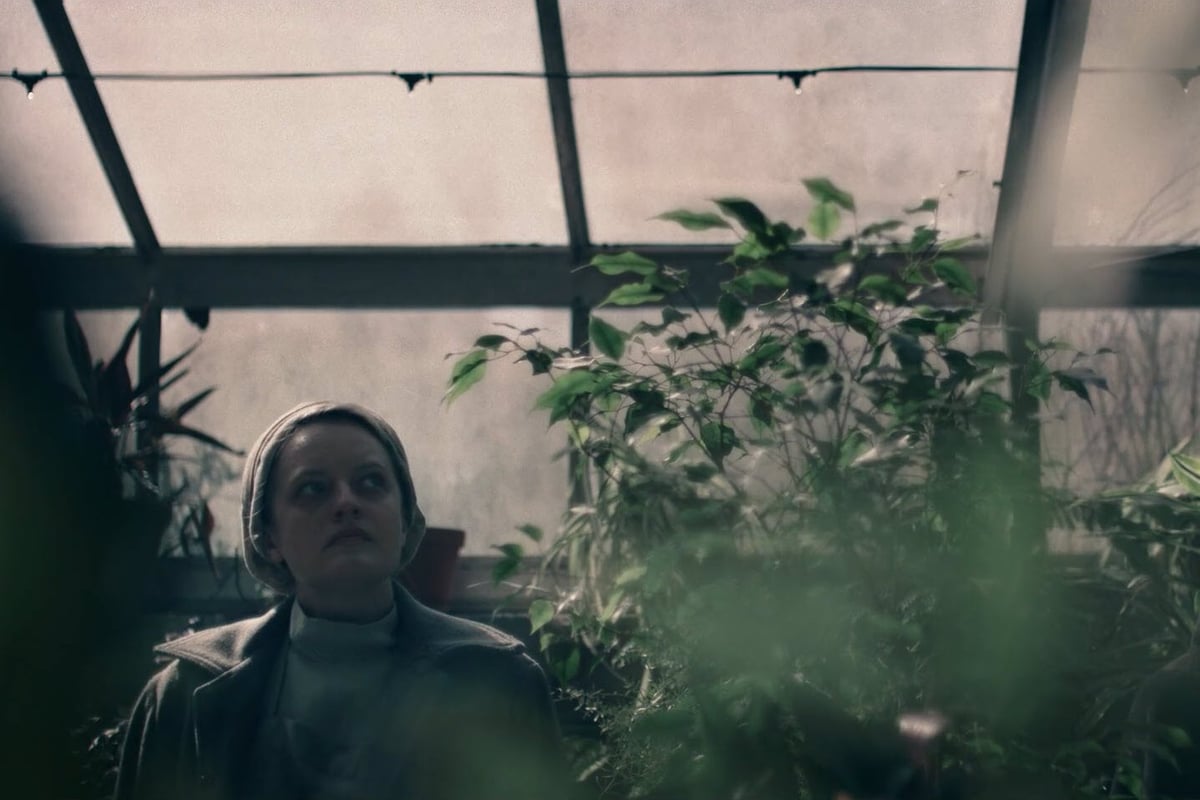 Back in Toronto, Serena and her stubby pinky finger are having a medical examination. She says the mutilation of her hand was a 'just punishment' in Gilead, and admits Fred abused her more than the once. Oh, and she needs an STI check 'cause of how much he frequented the Boston Jezebels.

Afterwards, Mr Coconuts and Treason, Serena and her lawyer are chatting in Serena's day spa/prison room. The best way to get her off her charges, and get her immunity back, is by highlighting Fred's abuse to imply she acted out of fear for her own safety.

Serena says it wasn't abuse, and Fred probably regrets it. Fred does not regret it.

Moira and Emily are working to re-home the children from Gilead, and it turns out, finding homes for 86 children who don't know anything but 'Under His Eye' is proving difficult.

Ooooh, but Moira has a girlfriend and Emily's definitely jealous. But is it of Moira's girlfriend or the fact that Moira has been able to establish what seems to be a pretty normal relationship, after Gilead?

At the farm, Alma is not pleased about June's sudden decision to take down a bunch of Commanders at Jezebels. They need to leave the farm now, but the safe house won't be ready until tomorrow. 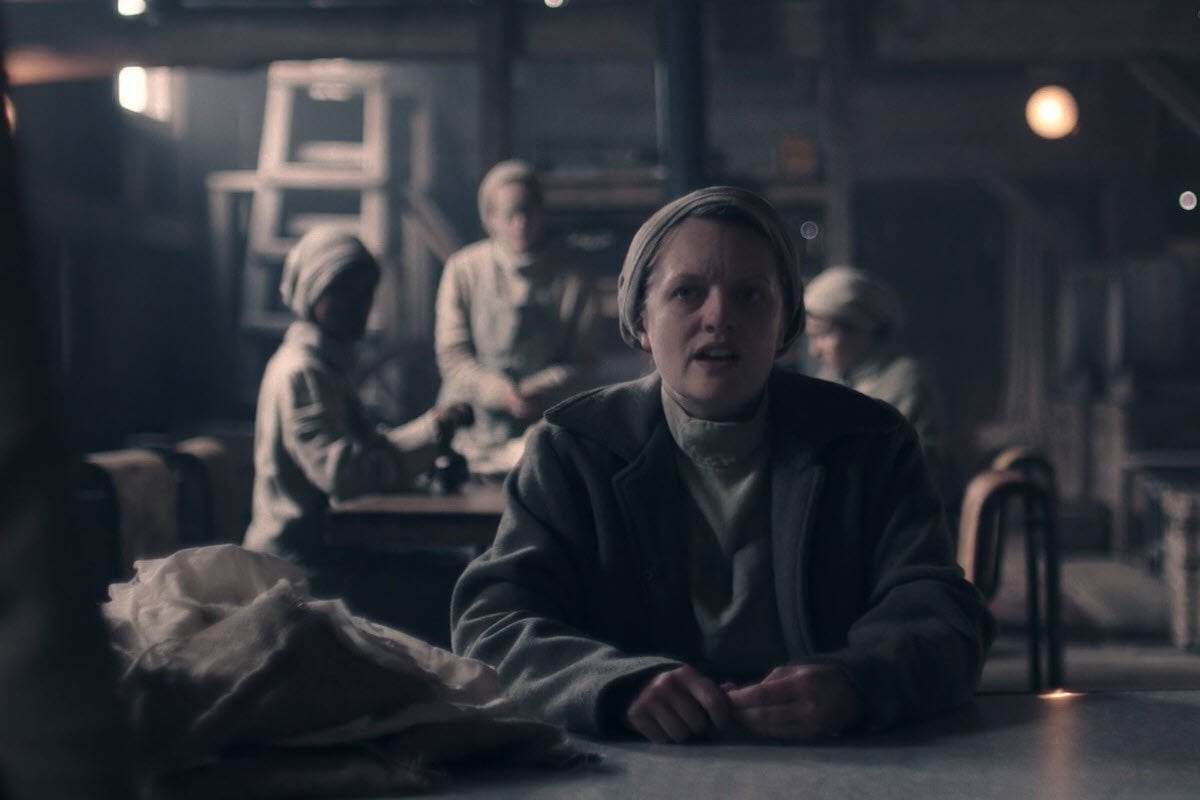 With an extra night forced on them, June's gone rogue. Why not use the time to kill a bunch of Commanders?

"So you’re just going to Rambo in there, shoot the place up, get yourself killed or caught?" Alma asks. June doesn't seem to care.

Meanwhile, Esther is devastated at the possibility of being left alone on the farm again and begs them not to leave her there.

It's clear from the get-go June will say yes; she literally called Esther Hannah's nickname 'banana' in the last ep.

At the same time, June clocks on to the reason Commander Keyes is a little... muddled. It's not dementia, but because Esther is a dab hand with poisonous plants.

"You learn things on a farm," Esther says, to June's delight.

"Can you teach me how to make more?" she asks. And suddenly, she has a plan for Jezebels. 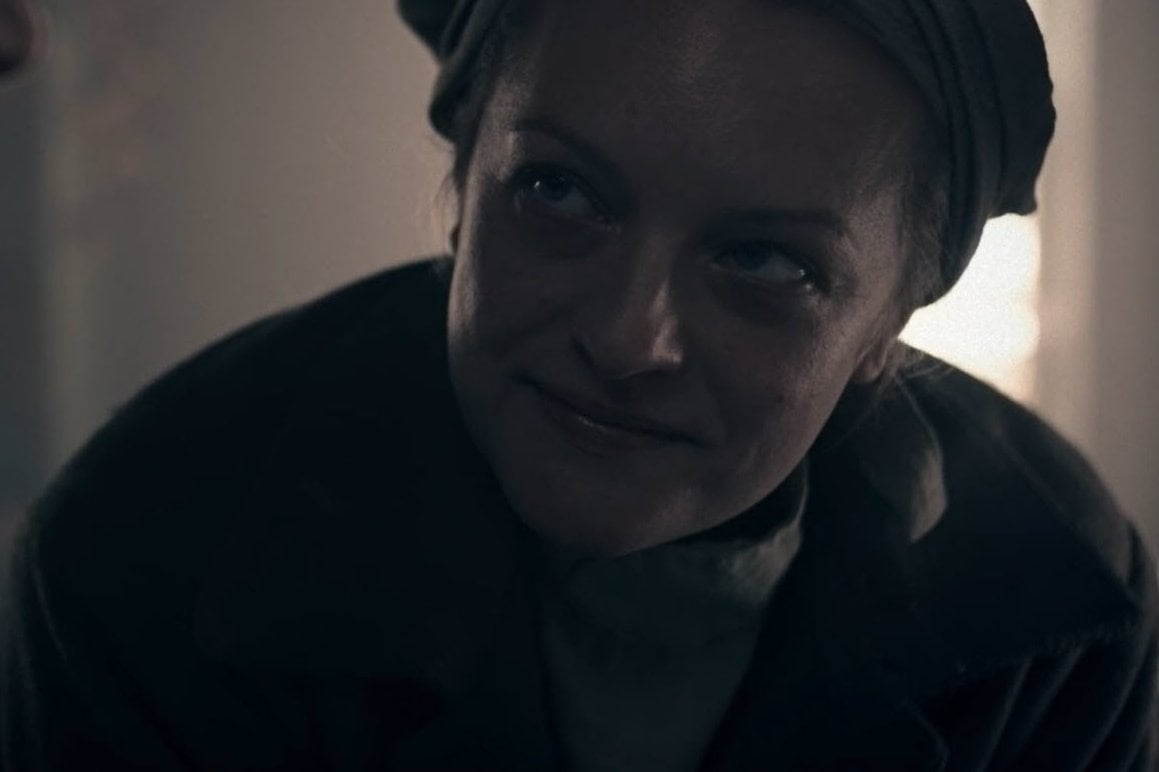 "Dw, I'll go back to saving my daughter after we poison all these people." Image: SBS.

Serena meets Fred in the day spa's chapel and tries to manipulate him into dropping his claims against her by reminiscing on their life before. She's even dressed like a muted Wife.

Fred is not here for it. He's a war criminal, facing life in prison, and it's because of her betrayal. So... honestly, it's not surprising he plans to take her down with him.

Serena says she wants to see Nichole, and Fred reminds her "Nichole is not your daughter, any more than she is mine.

"And if you think I'm going to let you have her, to walk free and go start some new life, you are delusional." 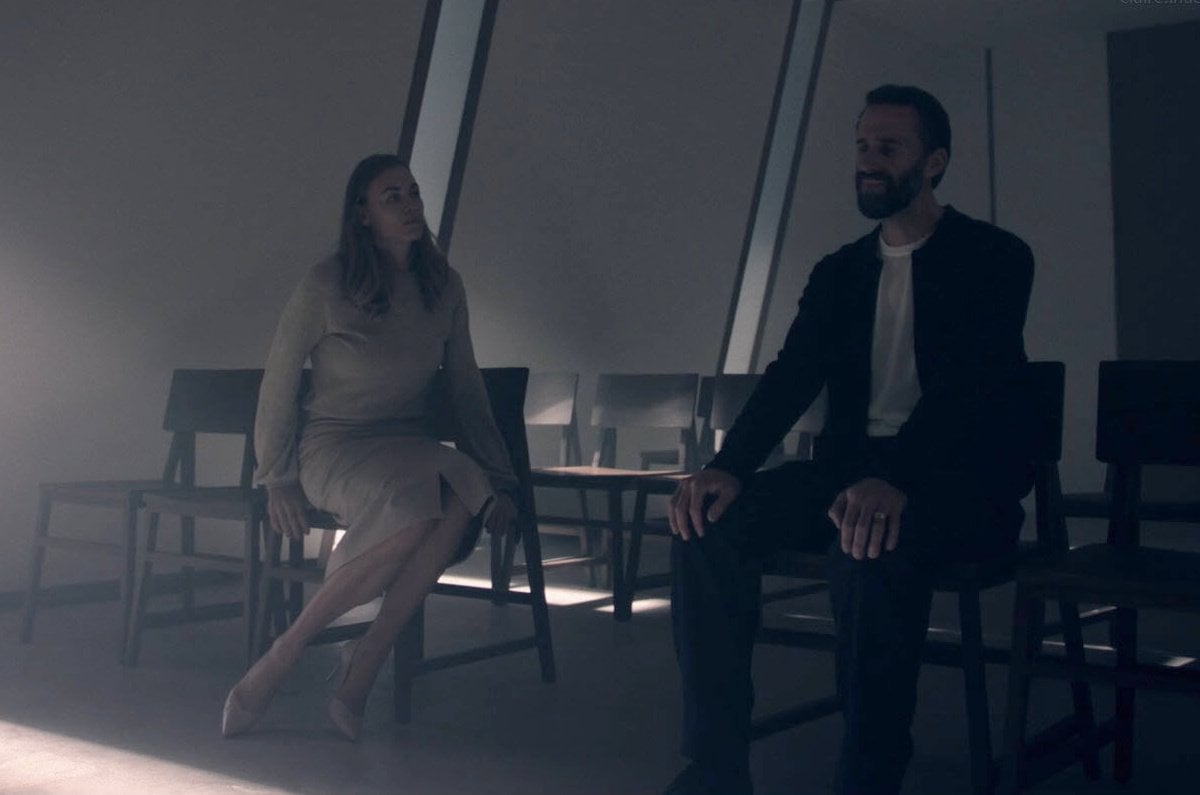 Just once, I'd like to see them in prison overalls, please. Image: SBS.

Moira goes to visit one of the Gilead children, Asher, and finds he's... not doing great. Gilead is all he remembers, so he misses his 'parents' and clearly can't comprehend why he's been taken from them.

That's not something June considered with the Angel Flight, and now that Moira's picking up the pieces, she's p*ssed.

"That's what she does: takes the big swing, and f**k the consequences," she says to Emily. Remember how Moira's now a guardian of Nichole, too.

"I love Nichole, but I never wanted to be a mom," she confesses, saying she feels the need to clean up June's messes because of her guilt about getting out when June didn't.

She hatches a plan to help Asher, bringing Rita with him for a taste of 'home' and understanding, which seems to help. That's one child doing okay, only 85 to go!

June leaves sweet, innocent Janine in charge of getting everyone ready to leave the farm, while she hitches a ride back to Jezebels and convinces Daisy to get as much poison as possible into the men inside (and the tea of a fat-shaming Aunt, for good measure). 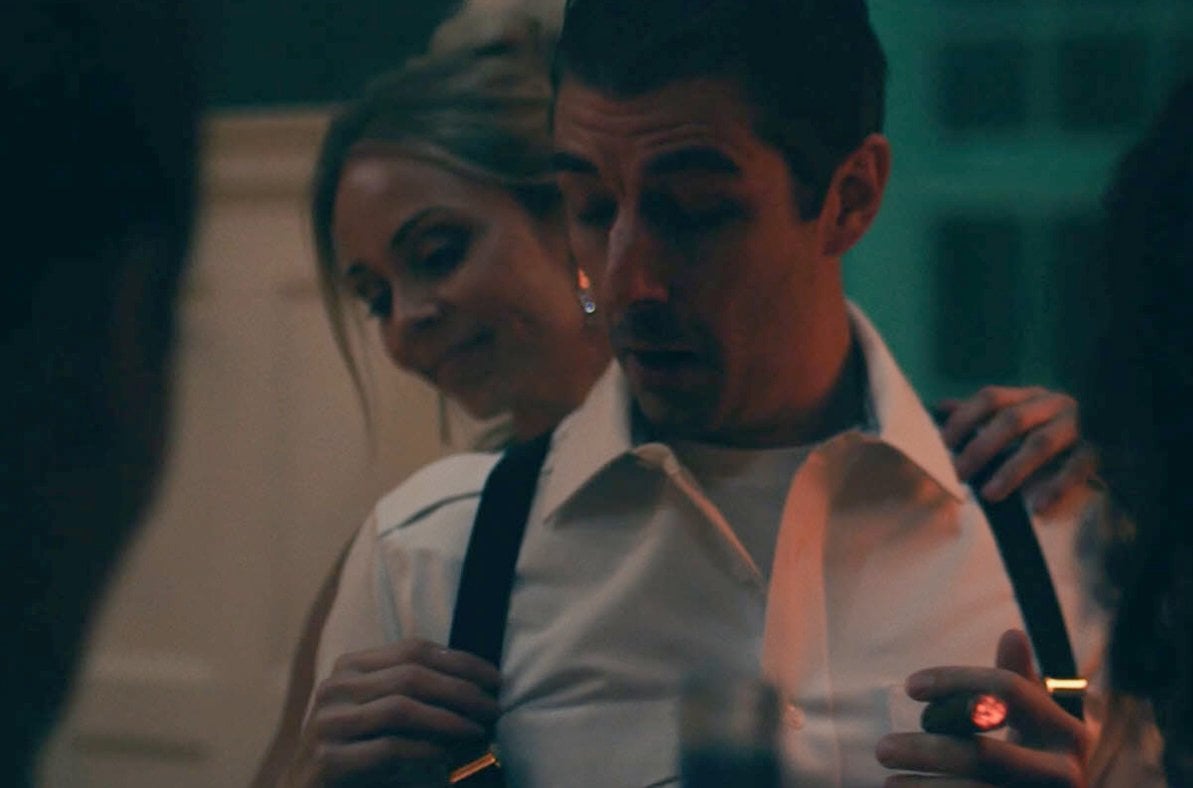 Sir, you are about to die. Image: SBS.

In Canada, Serena is pacing the rooftop of her day spa, probably thinking about whether or not massage is part of the prison package, when Mr Coconuts and Treason arrives with details of her health check.

"You're pregnant Serena," he tells her. "Congratulations."

Well, sh*t. Blessed be the fruit, after all. This changes everything.

When June returns to the farm from Jezebels, something is clearly wrong. All the lights are on and the front door is wide open, but there's no one around.

June tries to get the helpful Guardian to leave for safety, but he says he won't leave her. Precisely 30 seconds later, his brain matter is on her face. Ick.

She reaches for his weapon, but is suddenly the target of at least six snipper lasers.

It's not looking good, but then Nick(!!!) strolls out of the darkness.

He asks her where the Handmaids are, and once he gets closer, he tells her he's trying to keep her alive, giving her the smallest touch on her shoulder.

She removes her grip from the gun, and is surrounded.

Welp. Not even fake freedom lasts long in Gilead.