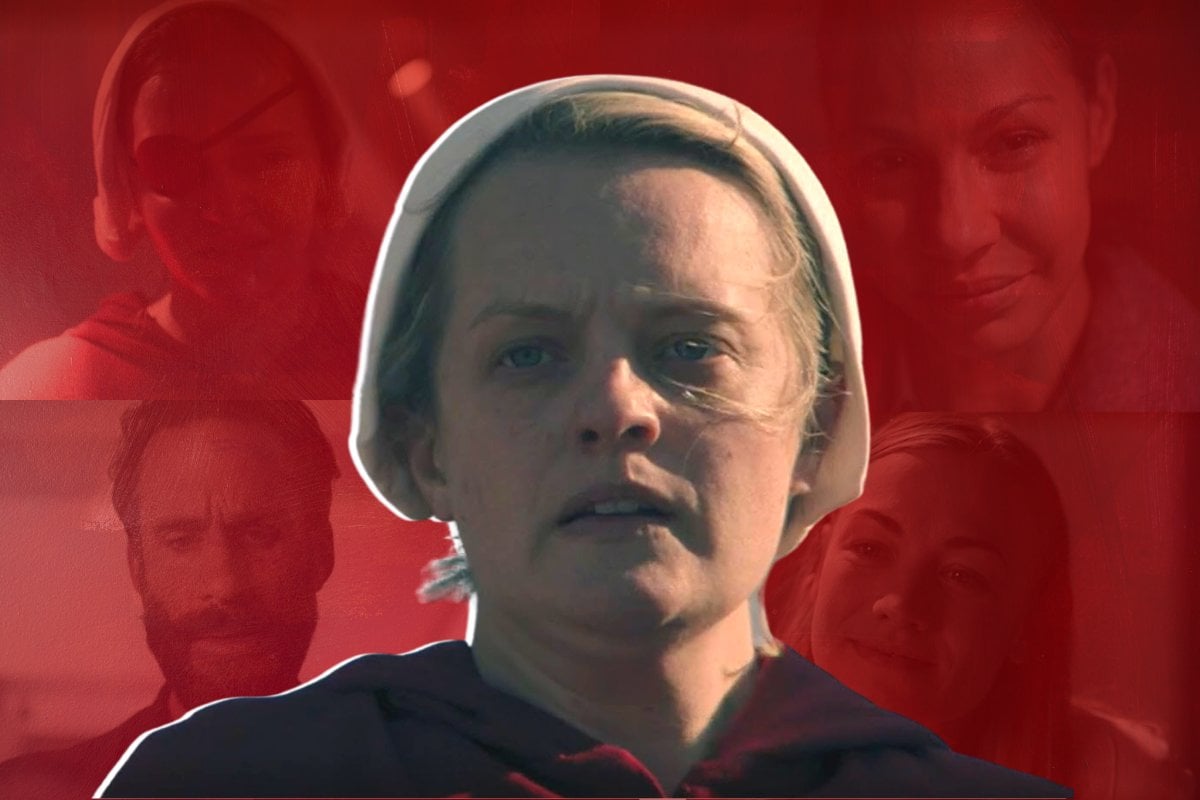 June and Janine are alive, but all their friends are dead.

I shall miss Alma (and Brianna too, I guess) with my whole heart, but there's a small upside: Janine, who names pigs and remains hopeful even after years of Gilead's bullsh*t, now has a much bigger role to play.

They've followed the train tracks to a depot, where they overhear Guardians discussing a train bound for Chicago. The front.

Janine is like, 'Why would we go to the front you f***ing idiot, people get their arms blown off in wars.' She's not wrong, but June thinks Chicago is their best hope of finding Mayday.

There's only one way to make it on the train, and it's by jumping into a vat of an unidentified substance. Risky, but not as risky as sticking around and getting caught.

June jumps in first, and it's milk. Better than petrol, but also… yuck. Thank God neither Handmaid seems lactose-intolerant. The potential consequences if they were would be... honestly not even worth it. 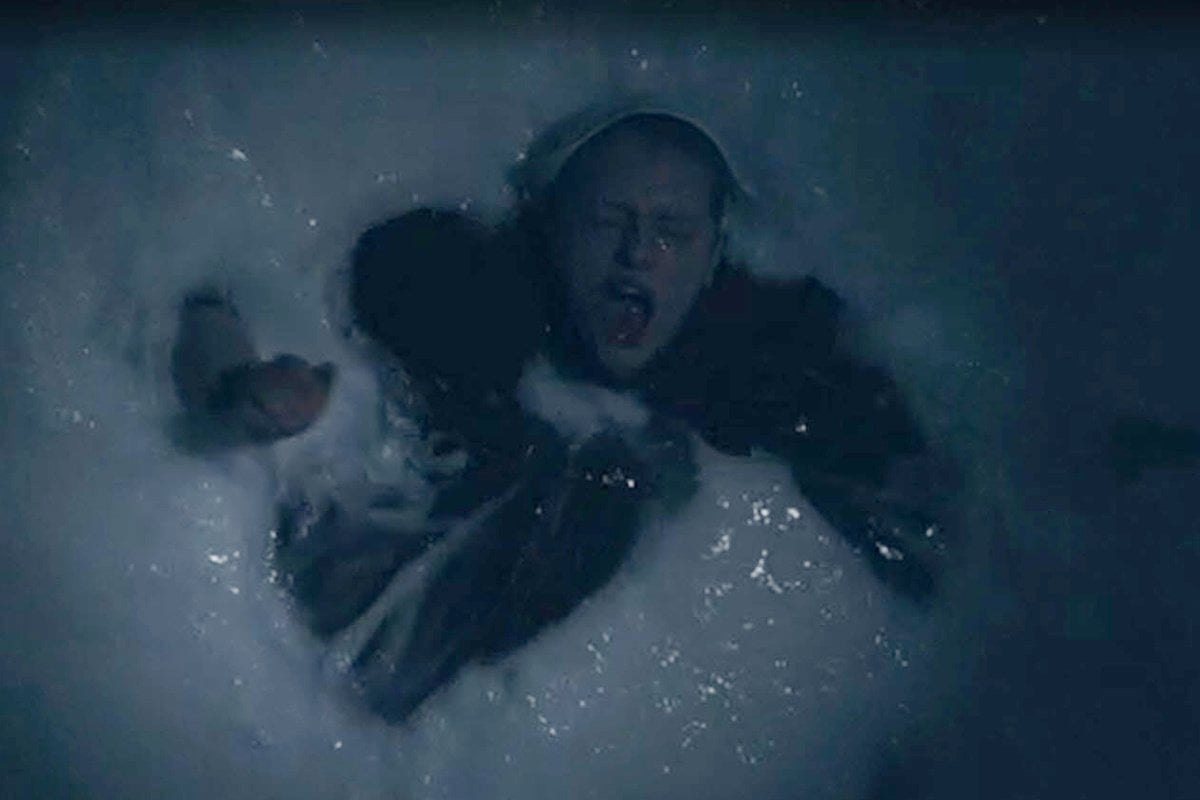 Also how gross would their robes smell once they dry off??? Image: SBS.

The train begins to move and they're both very quickly at risk of drowning via milk bath. After all they've been through, that would be a weird way to go.

Thankfully, June finds the way to drain it, so instead of filling their lungs with dairy, they have to spend the hours-long journey west almost freezing to death inside a giant refrigerator.

In Canada, Rita is kneading dough. Has anyone else realised how closely she's stuck to her Martha wardrobe? Muted colours, lots of grey, beige and khaki. And here she is making bread while the sounds of Normal Life go on outside her window.

Ah, Moira's come over for dinner. She's searched refugee databases for Rita's sister and nephew, but they're nowhere to be found. Moira says they may have gotten out of Gilead with fake passports thanks to "the Catholics". My very Scottish, very Catholic grandmother would be stoked at that.

Moira tells Rita that Serena wants to meet her in her day spa/prison cell. Rita agrees, and Serena is sickly sweet. Rita calls her ma'am, reverting to their Gilead formalities. 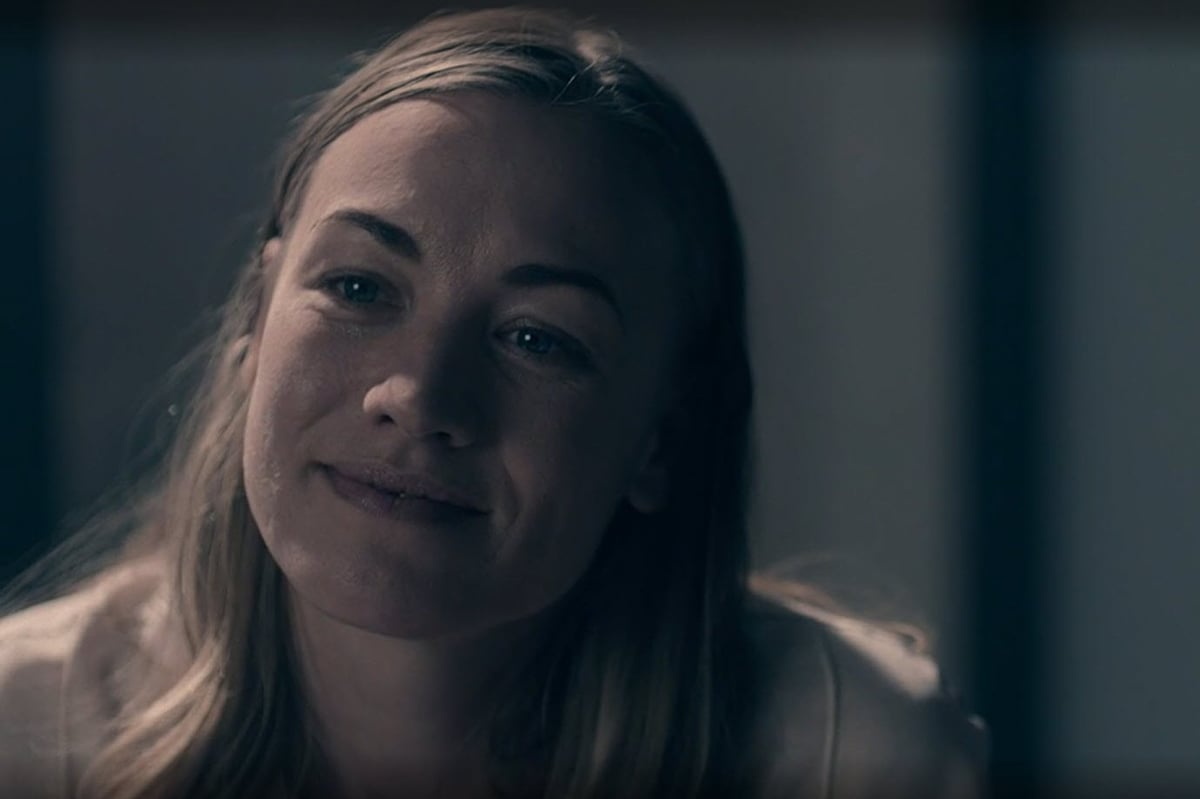 YOU ARE THE WORSTTTT. Image: SBS.

Serena tells her she's pregnant, but she's not going to tell Fred about the baby. Instead, she wants Rita to help her raise the baby. She doesn't even ask her, it's just an assumption.

What in the actual hell, Serena? She's still treating Rita like her Martha, while she's the one imprisoned in a cell - albeit a very nice one that looks too much like a day spa. Serena is the worst.

She gifts Rita a copy of the ultrasound because all Rita has to do now that she's free is to celebrate the pregnancy of her former captor. Duh.

Back inside the travelling fridge, June and Janine are frosty. Both literally and figuratively.

Janine demands to know if June gave the Handmaids up to the Eyes. June explains she had to, because Hannah, and Janine says she would never have done that if she was in June's shoes. I mean, Janine's a lot of things but tough-enough-not-to-crack-under-torture is not one of them.

Another thing Janine is not, is a mushroom.

She was a single mum working at Denny's, who needs a shift off for a 'timely doctor's appointment', we learn in a flashback. She needs an abortion, and finds herself at one of those 'crisis' pregnancy centres that exists to shame, bully and manipulate women into doing something they don't want to do. 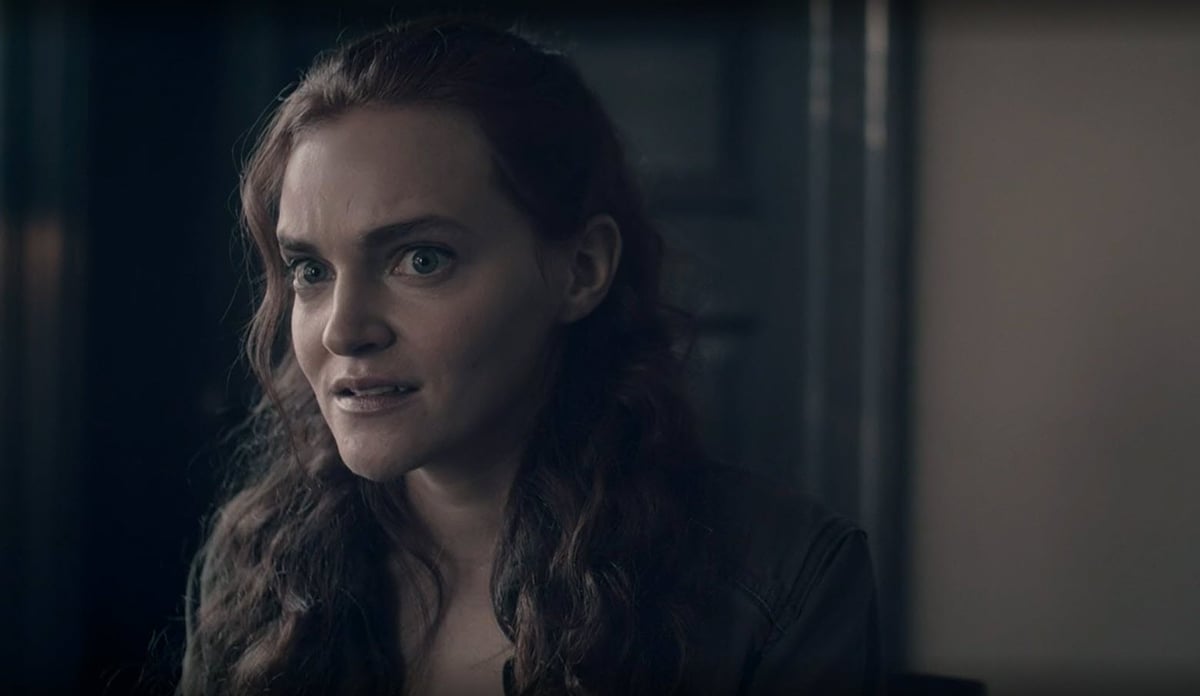 "You're used to being underestimated, you think you can't do this, but you're strong, you're smart, and you'd be a great mum," the 'counsellor' tells Janine. She's right, but not completely. Janine is already a great mum, to Caleb, and that's the reason she's there.

"Did you know in Gilead I was officially considered property of the Waterford family?" she asks. "Registered and everything. Like my old Nissan Altima."

Rita takes Serena's ultrasound and delivers it straight to Fred. It directly undermines the wishes of her old 'master', but also blows up whatever idyllic life Serena had imagined herself having outside of the Canadian day spa.

An absolute boss move from Rita, who leaves Fred with parting words so good I may have done a little fist pump: "You deal with your family. It's not my job anymore, and I thank God for that every day".

Meanwhile, the train has reached Illinois, and it's under attack. Mayday?

When the shooting stops, June climbs out to see who the attackers are. They're looting the train, so at least they're not Gilead troops. She lifts Janine out of the tanker with one arm, like she's the literal Hulk.

Okay but June, show us your bicep? Image: Giphy.

There's no time to wonder about June's superhuman strength, however, because the rebel leader, Steven, begrudgingly lets them join his group in Chicago - which is a total mess, by the way. 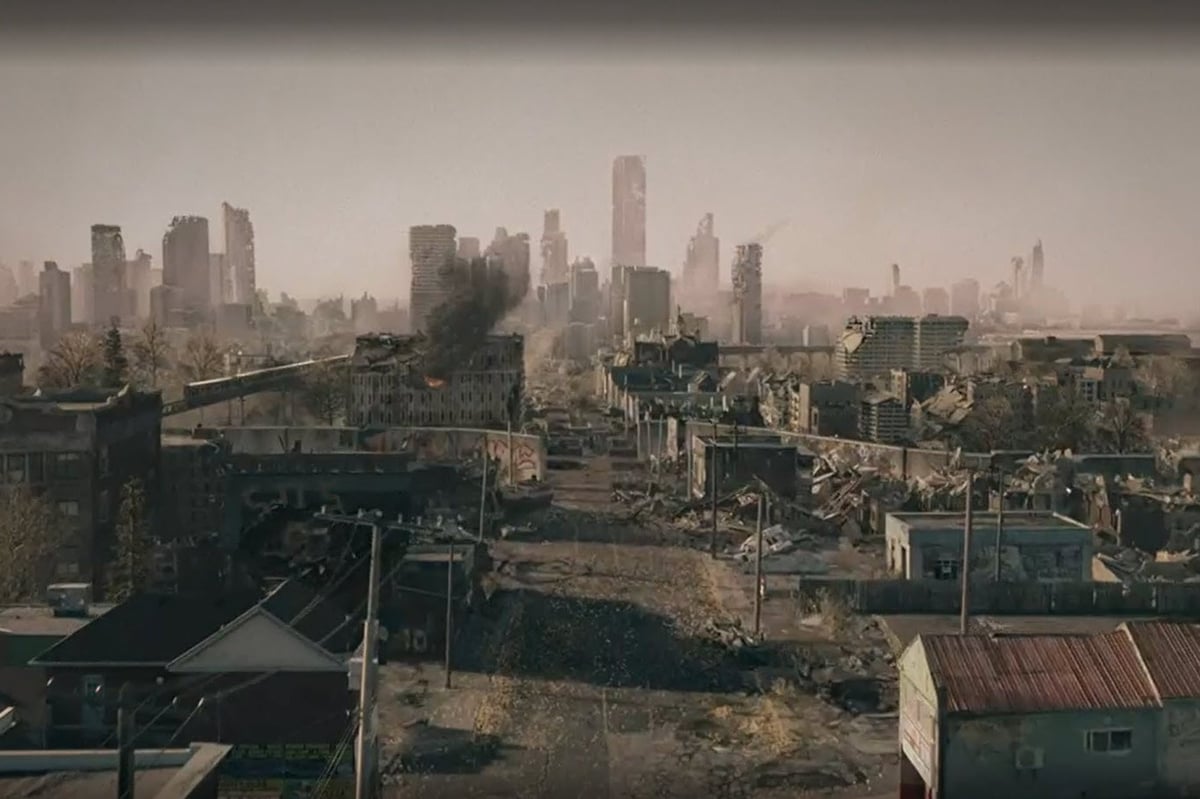 At base, Steven expresses his disgust at Gilead's use of sex slaves.

Then he says they can stay with them, with food and shelter, only in exchange for sexual favours.

Finally, a sense of hope within what once was the United States, and it's brought crashing back down by another man who sees these women as servants to his needs.

And his deputy, a woman with a gun named Theresa, stands by.

Here they are, fighting against Gilead, while turning themselves into the very same thing. 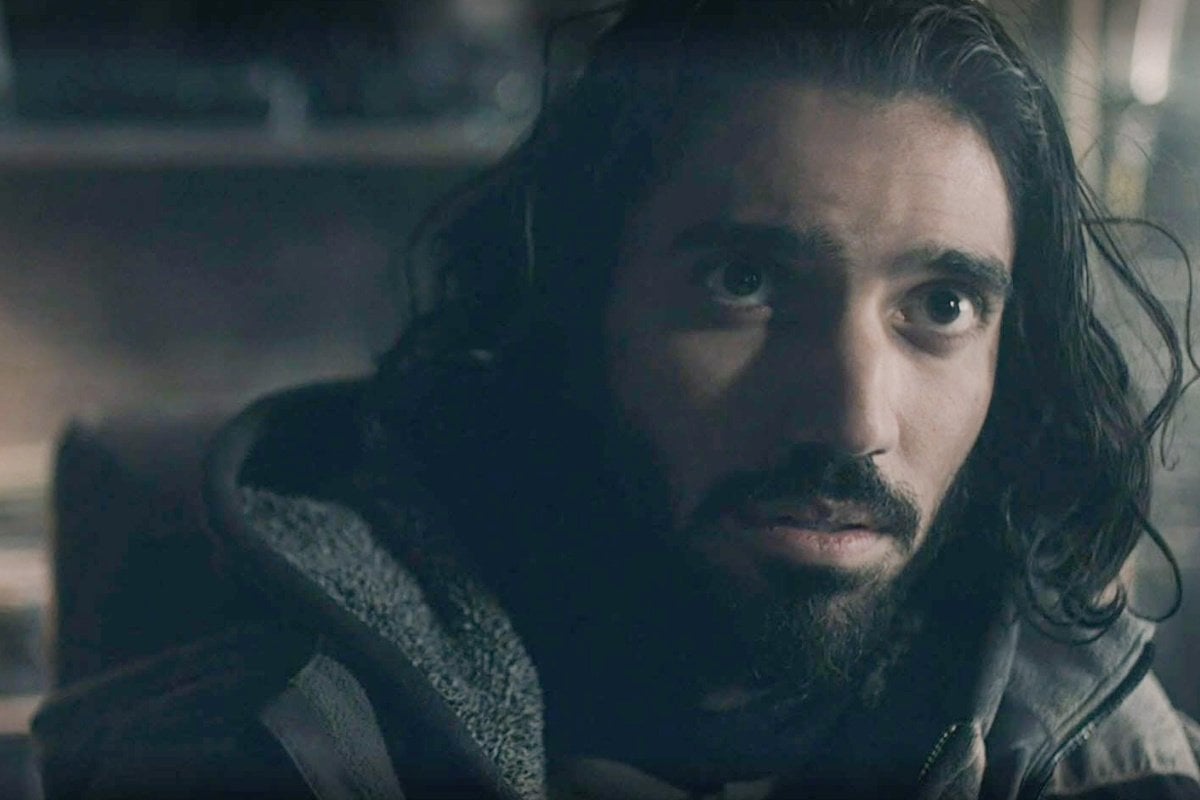 June, intent as ever to be the hero and to protect Janine, is the one to stay behind. She kneels before him, hands trembling. But she can't do it.

He confirms he's not Mayday, and with that, June grabs Janine to leave. Janine gives her clothes to change into first, because running around in a Handmaid outfit may attract trouble? Possibly? Just a feeling?

As June leaves, Janine glances up at Steven's office.

In another flashback, Janine is looking over the pamphlet she received at the fake-abortion clinic. At a different doctor, she explains she can't financially support two children, and the doctor says she has nothing to explain. If she doesn't want to be pregnant right now, that's her choice. Case closed.

In Toronto, Rita is transformed after figuratively blowing up the Waterfords. She's dressed in cream and bathed in light, drinking a diet coke and eating takeaway sushi. 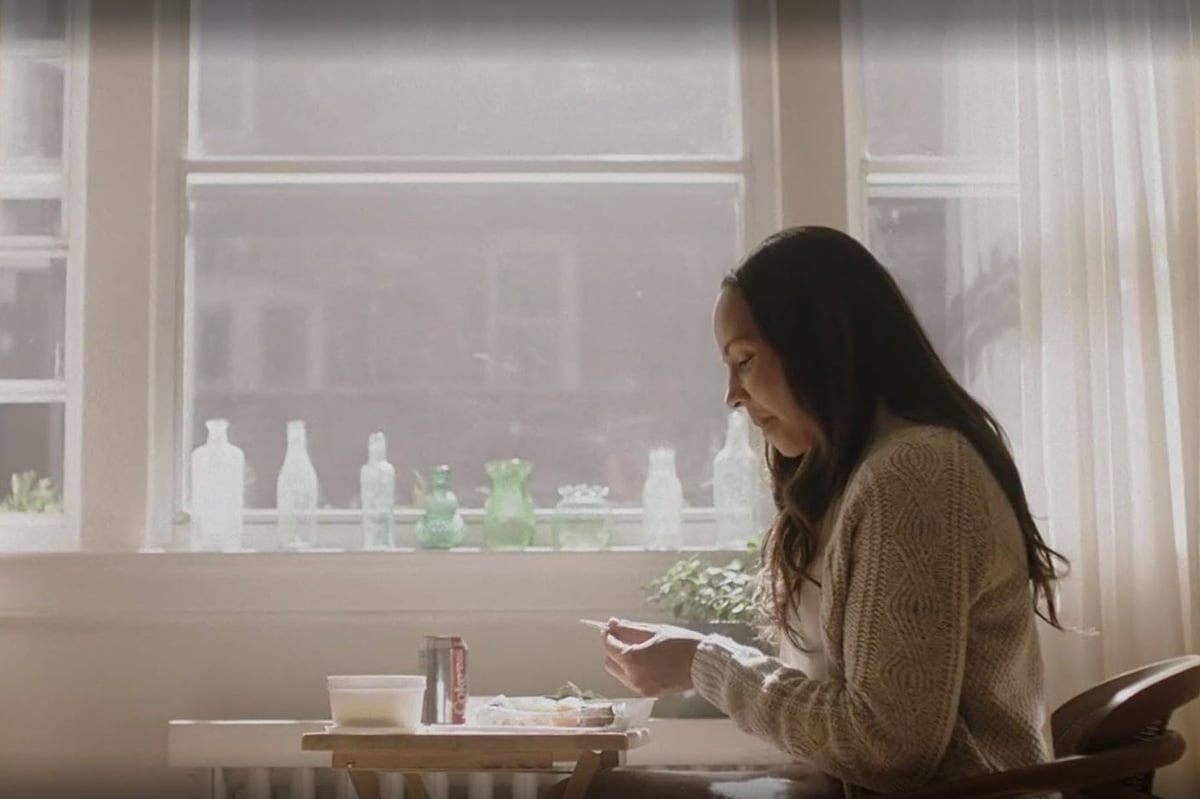 She can barely contain her happiness. She's been free physically for a number of weeks, but now she's free mentally too.

YOU DESERVE IT, RITA.

June and Janine are still a long way from sushi. In Chicago, June takes off her red robes - please let this be for the last time - and changes.

Janine returns, casually handing her a piece of bread. She's fulfilled Steven's requirement, and they can stay. 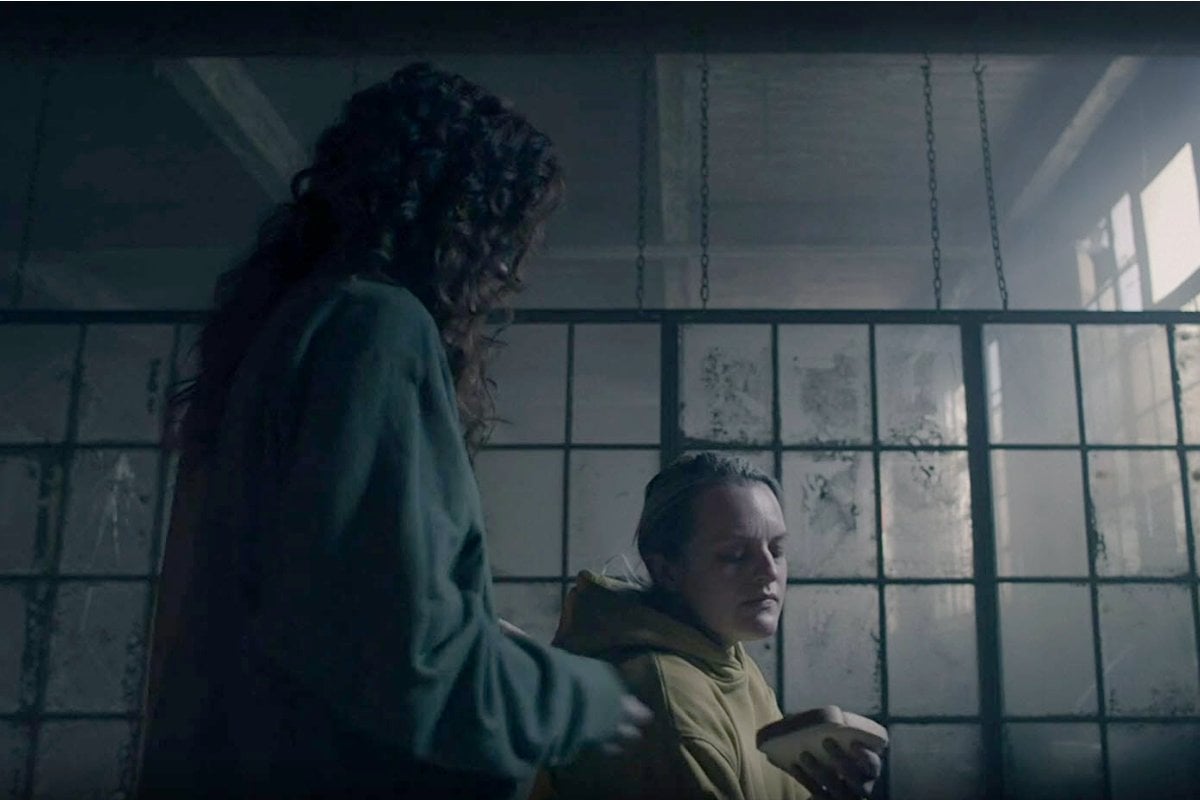 The most disappointing trade in the history of trades. Image: SBS.

But this is an important turning point for June and Janine. Janine is not just the ever-hopeful, pig-naming Handmaid who must be protected. She's stronger than June knows.