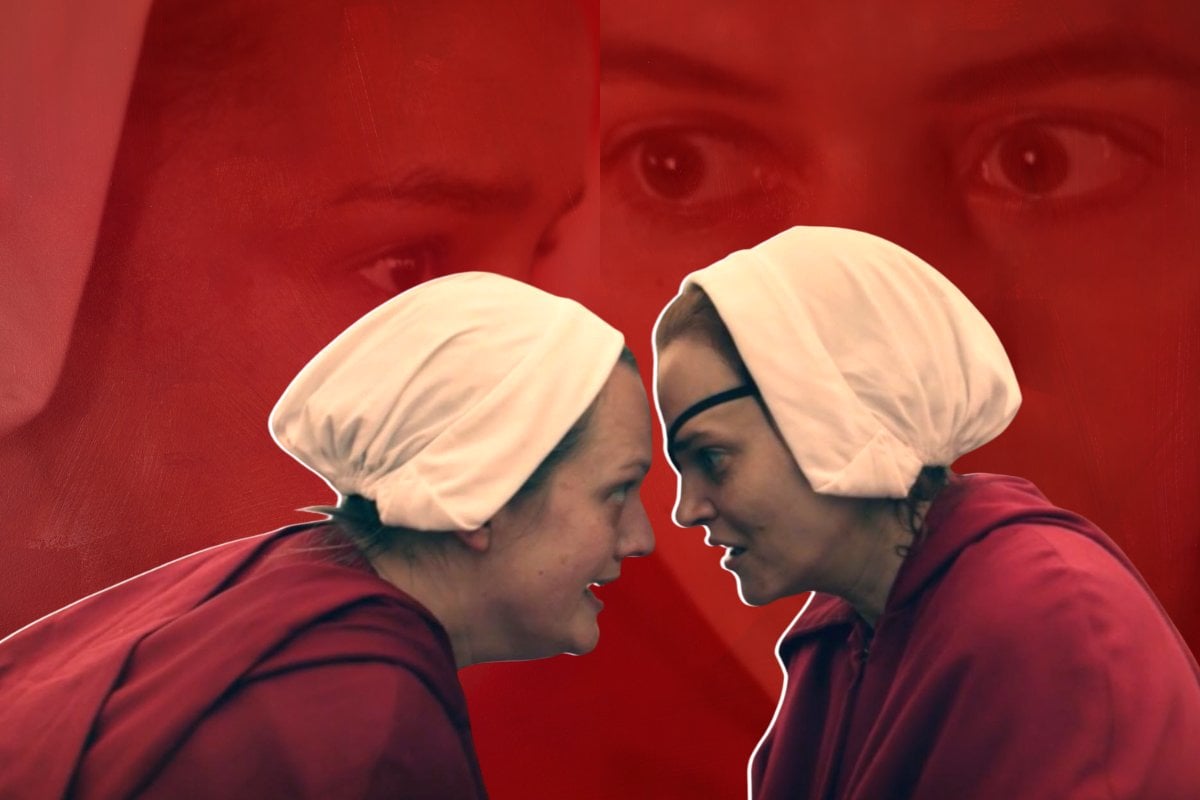 June's gagged and shackled in a van, recaptured for the 2456th time, and this is going to be BAD.

When it comes to a halt, after entering another bizarro building Gilead has no doubt had fitted for its... truly horrific purposes, Nick and his eyebrows open the van door.

He frees her from the shackles and gives her the rundown: Esther is okay and the other Handmaids have made it to the next safe house. There is no way she's telling him where that is.

Aunt Lydia arrives "as June's advocate" which is OUTRAGEOUS and escorts her to a concrete room. There are screams in the hallway, because Gilead prisons are nothing like the Waterford's Canadian day spa.

June's tied to a metal bed, and a lieutenant enters the room. This guy is the CREEPIEST OF THEM ALL. He's smiley and calm and way too chipper about dishing out actual torture. 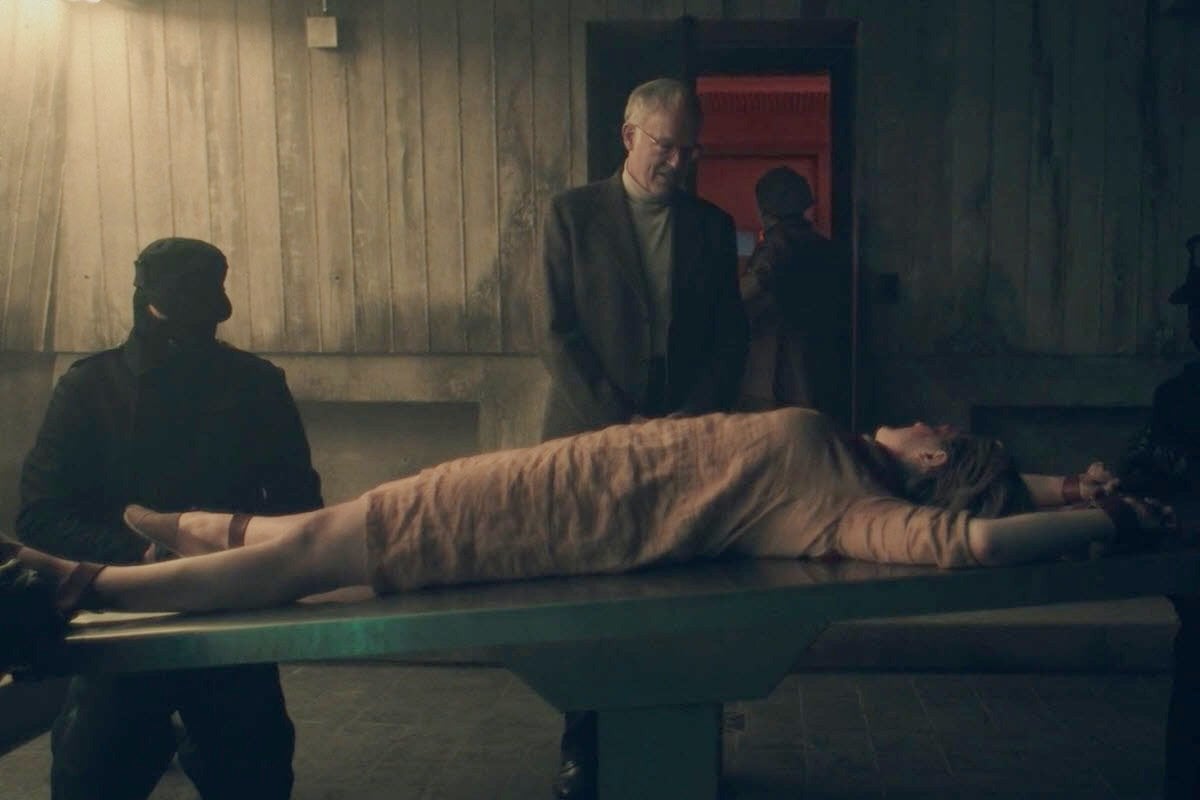 I HATE THIS MAN WITH MY WHOLE HEART. Image: SBS.

Even Aunt Lydia has flashes of morality from outside the door as June is waterboarded. But no matter, because she's got a cross-stitch to do to take her mind off all the war crimes.

The Canadians know June has been captured and tell Luke it'll be almost impossible to get any further information now. I want the show to delve more into the Canadian sources and spies, that's interesting as hell.

The messenger says her grandmother used to bury persimmons in her backyard for good luck. This show is full of weird sh*t, but that takes the (fruit) cake (sorry not sorry).

Aunt Lydia warns June the lieutenant is very determined, so she should probs give up the girls or there will be some more torture coming her way.

"You failed them, didn't you? You failed your precious girls. It is your fault." 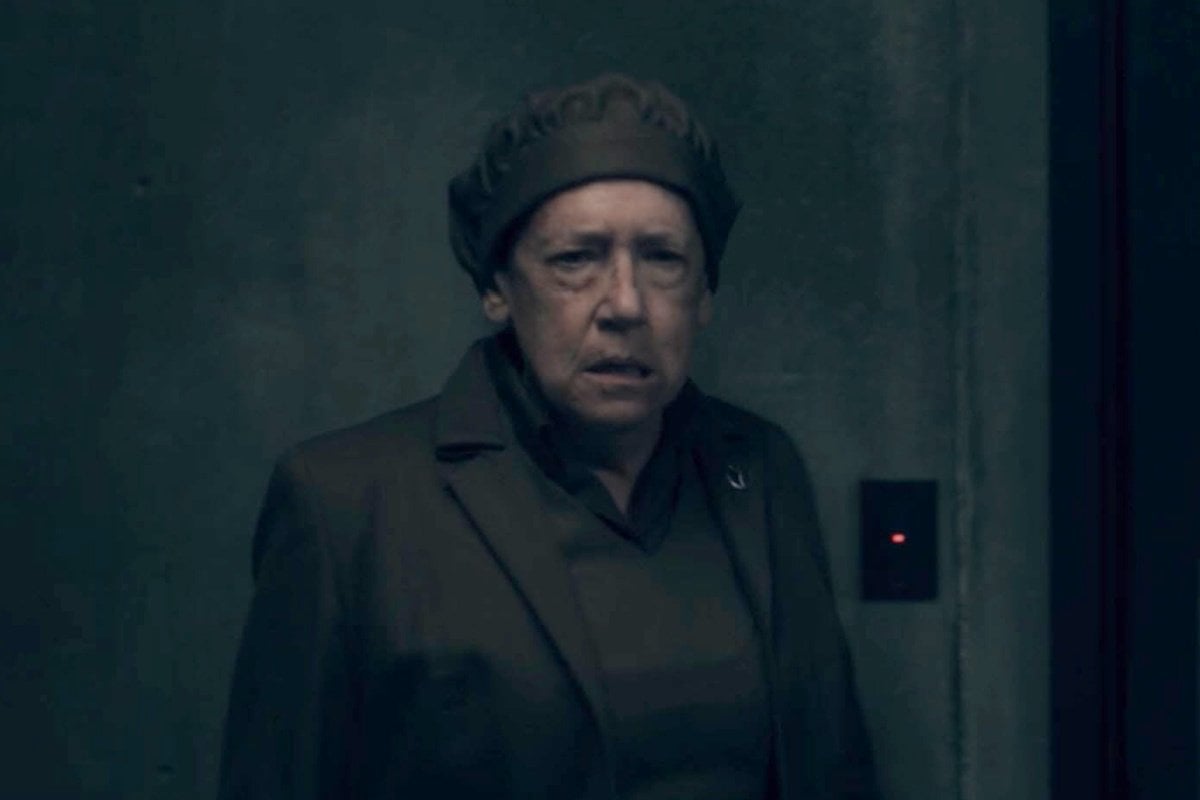 It definitely is her fault. Image: SBS.

Then she says Janine, who Aunt Lydia has always had a soft spot for, turned on her in a "f***ing second". Right where it freaking hurts - literally, because Aunt Lydia calls in the Lieutenant again for a spot of fingernail pulling.

I have to physically turn my face, because I adore this series with all my heart, BUT TORTURE IS NOT NICE TO WATCH. June tells him to stop. She says the Handmaids crossed the state border to Vermont - a lie that they figure out pretty quickly.

She's taken to the building's roof, where two Marthas are standing on the edge.

One of them calls to June not to say anything. The Lieutenant swiftly pushes her off the edge to her death. Holy sh*t.

The remaining Martha is crying. June cries too, and they hold hands. As the woman says "June," beginning a sentence, she's pushed off the roof as well.

AND THE LIEUTENANT JUST KEEPS ON SMILING.

June's taken back to her cell and shoved into a metal box. So far, this episode is 90 per cent torture.

Nick and Commander Lawrence are having a chit chat about moving on from June, which they both know is impossible. Then Nick does something... interesting.

He sort of... blackmails Joseph, telling him he's becoming very comfortable in his house, and Nick can help him stay here, if Joseph helps him.

In the metal box, June is singing 'Heaven Is a Place on Earth', just like she did when forced to stay at the hospital for months kneeling while waiting for a braindead Handmaid to give birth. Presumably, Gilead was not the heaven on earth Belinda Carlisle was referring to.

In Toronto, Luke's being eaten up by the thought that he'll probably never see June again, and that's because of a choice she made to stay behind. He knows he has to respect her decision, but it sucks. 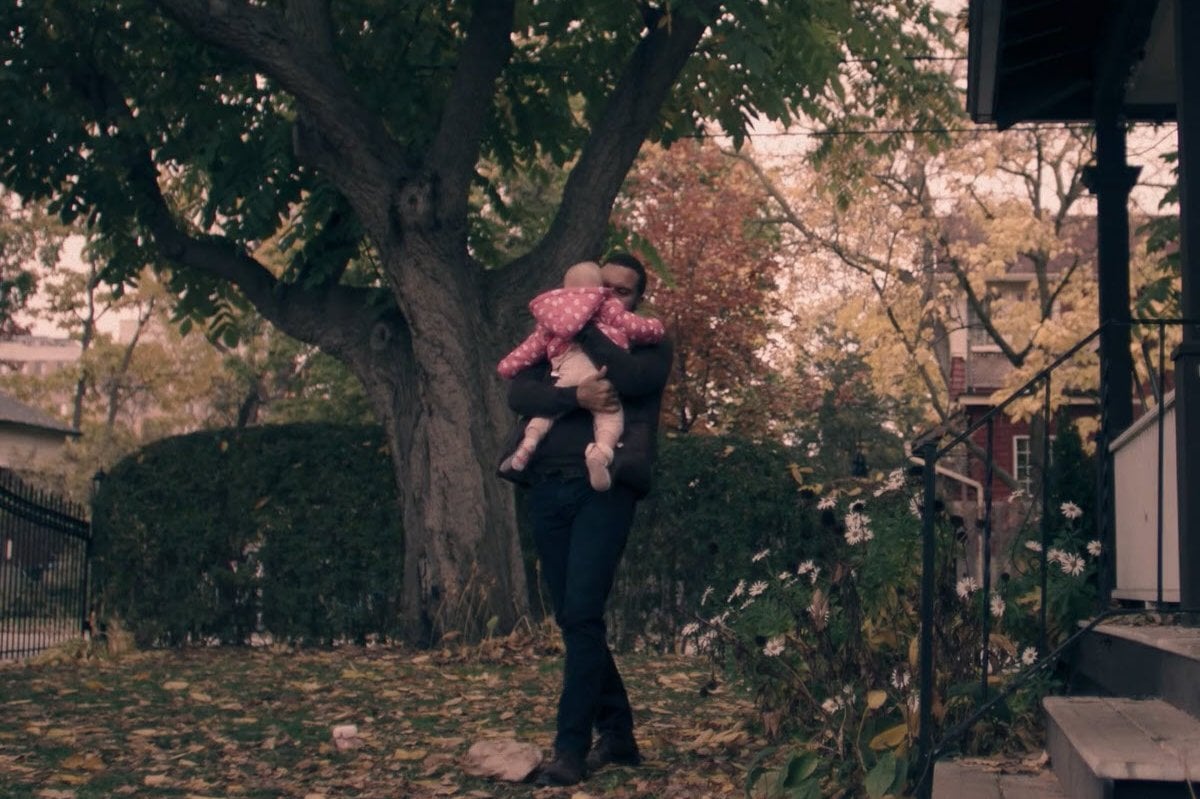 He and baby Nichole bury a persimmon. Humans are freaking weird, huh? The things we'll try. But this is so heartbreaking.

Actually, the persimmon may have helped.

June is removed from the metal box and taken to a dining table where Joseph is sitting. He tells her to eat, and references that nine commanders are in the hospital and six are dead after "bad liquor" at a Jezebels in Pennsylvania. Ooof, great success.

Joseph tells June Gilead will hurt Hannah if she does not tell them where the Handmaids are. WTF. That changes everything. June is dismayed because children are all Gilead cares about.

She's taken away and HOLD UP, she's barely taken three sips of soup. She's been in a metal box for god knows how long, let the woman eat!!!

She enters another room with a great big glass box in the middle, and inside is Hannah. When Hannah sees June, she runs to the other side of the box, scared of her mother. MY HEART. 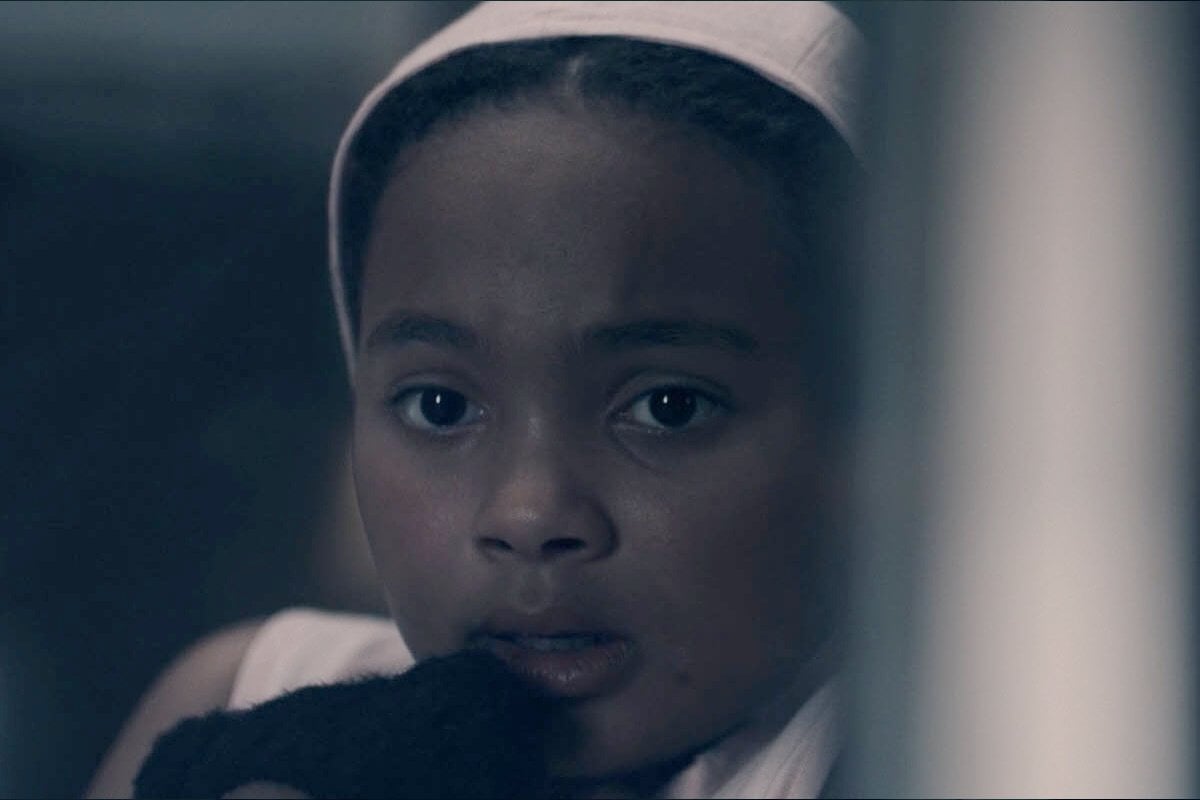 This breaks her. She's tells them where the others are hiding out.

At the farmhouse, Janine, Alma, Brianna and the others stand hand-in-hand as they are captured.

Later, Aunt Lydia tells June they've all been found and are safe. Well, not actually safe. Gilead-safe. Which means they're going to be reassigned a Magdaline colony - a hybrid of all Gilead's atrocities. They will be labouring in the fields most of the time, and breeders the rest.

June asks to die. Instead, she is clothed in red robes and a white bonnet, officially a Handmaid again.

She's taken to a bridge and meets Nick. Hannah is safe. June explains how Hannah was scared of her and not "them".

June's plan to save Hannah just got more complicated. She can't just save Hannah, because Hannah doesn't want to go with her. To free Hannah, she needs to destroy all of Gilead.

Nick tells her Hannah loves her, and so does he. Sigh.

Before she is picked up, she runs back and kisses Nick and tells him she loves him too. Ahem, are any Guardians watching this??? YOU GUYS??

She pulls herself away from the greatest eyebrows on television to sit in a van with the Handmaids she just betrayed.

The driver goes for a toilet break, because they've reached a train crossing and one is on its way, leaving the Handmaids and Aunt Lydia alone.

The Handmaids talk with their eyes, all coming to the conclusion that this is their chance. June throws Lydia to the floor, grabbing her taser. She decides against hitting her with it and runs away with the others.

The driver starts shooting, taking a couple of Handmaids down.

Then they have to cross the train track, as a train is hurtling towards them.

MY HEART IS IN MY THROAT.

June and Janine make it across, and as they turn, Alma and Brianna run across the track right as the train arrives.

WHAT THE ACTUAL HELL, NO.

Alma and Brianna are dead.

NO. NOT ALMA. ALMA IS THE GREATEST.

June and Janine barely have time to register it as they need to keep running, to whatever non-freedom awaits them.

The episode ends with June explaining the Handmaids connection. When they were first caught, they learned to communicate non-verbally. They had to. They're all in this together.

Bury all your persimmons, people, we need the last few members of this group to survive.

Reply
Upvote
After watching the first episodes, I'm calling it now: the show has jumped the shark. Hope I'm wrong, but I fear I'm not.
J
jyutkowi a year ago

Reply
Upvote
I know! I get it that Nick has some power but how did they get away with that very long kiss?
K
katp a year ago