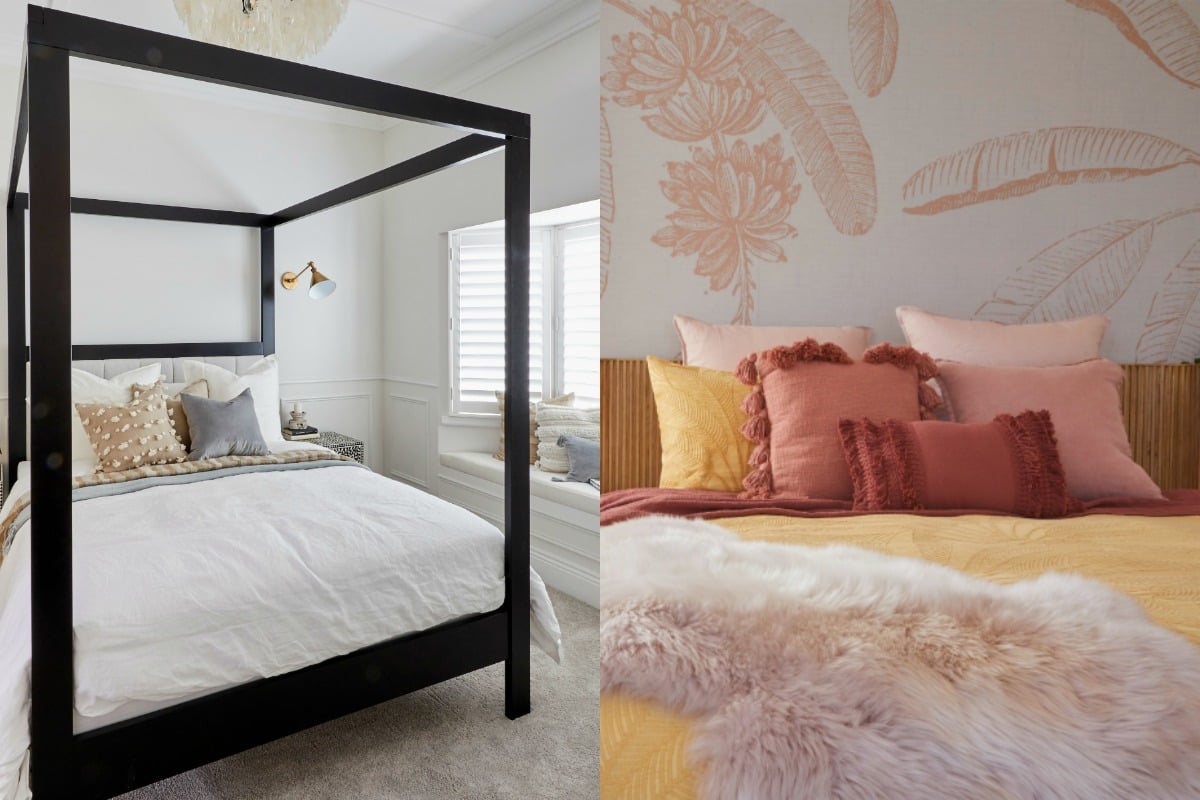 This week on The Block, the five couples renovated their master bedrooms and walk in robe. ﻿

﻿But although all five teams made it to the room reveal, it wasn't easy getting there.

As the world was beginning to hear more and more about COVID-19, Tash was forced to stay in her room for a day as she had a sore throat, leaving her and Harry trailing behind the rest of the group.

Then, after Tash was cleared to return to the show, her father Harry tripped and teared some ligaments in his ankle.

Thankfully, the pair managed to deliver their room on time.

As for the room reveals, the judges weren't exactly impressed by all the master bedrooms this week.

Here are all the photos from The Block's master bedroom and walk in robe reveal:

First up are Victorian father and daughter duo, Harry and Tash, who spent $20,200 on their master bedroom and walk in robe.

The pair had the biggest room on The Block this week and struggled to finish it on time after a few hiccups along the way.

Upon entering the room, the three judges were impressed with the vaulted ceilings and pitched roof in the master bedroom.

Although Shaynna isn't normally a fan of TVs in the bedroom, she loved the idea of the clever mirrored TV that the pair used, as well as the Emerald Crane wallpaper used.

As for the walk in robe, the judges noticed that it had a huge amount of space.

The only criticism was the hanging rack was too big, meaning the space wasn't entirely functional. 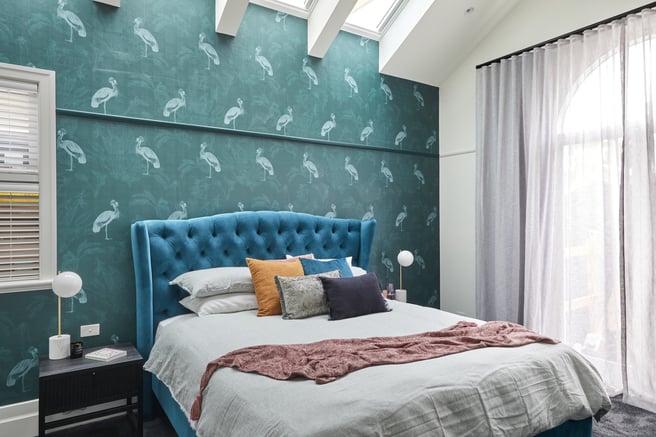 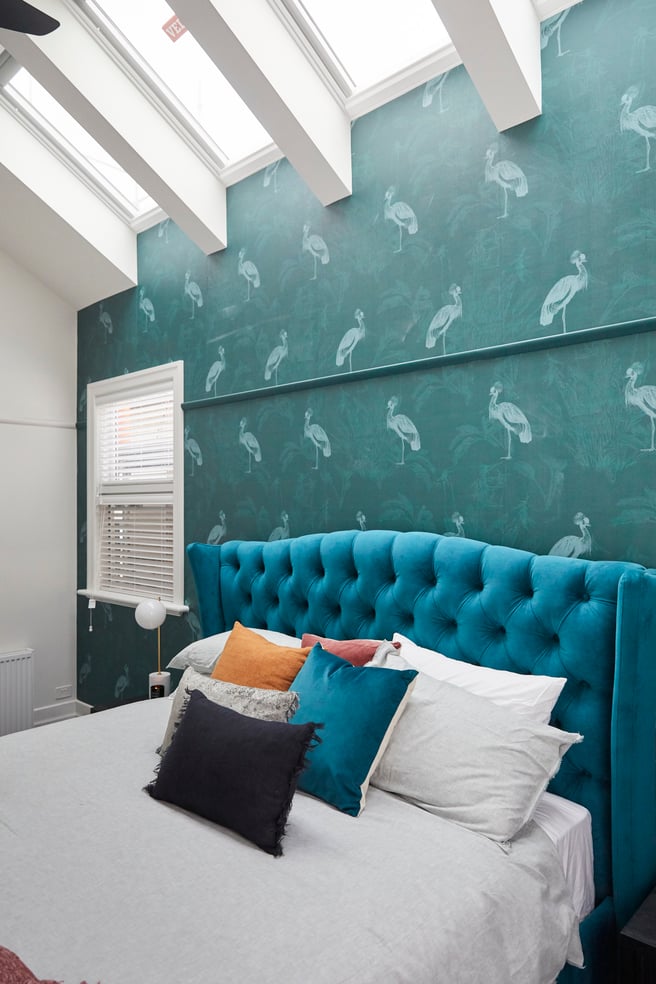 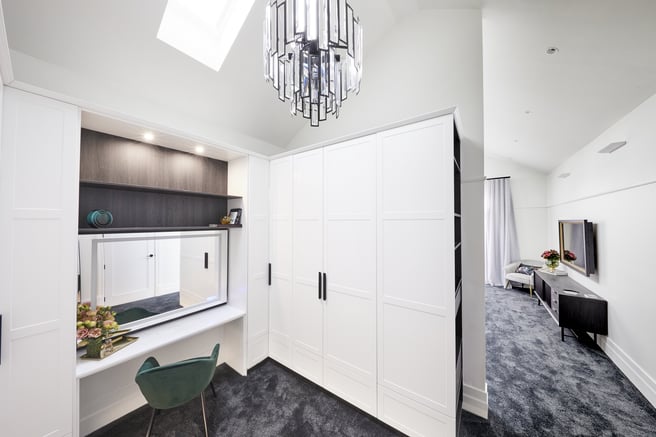 This week, Sydneysiders Sarah and George spent $24,997 on their 1940s master bedroom.

The couple worked hard this week to restore the ceiling rose, which George dubbed Ceiling Dion, to its original glory.

Thankfully, the couple's hard work paid off – the judges loved it.

"That is a dream come true, that ceiling panel," Shaynna said.

Elsewhere in the room, Neale wasn't impressed with the Grafico wallpaper mural.

"My eye is taken by that mural. I feel like I've seen it many, many times before," he said.

"It's the only thing in this room that I can see. For me, it's cancelling everything else out."

As for the walk in robe, the judges felt that while it was functional; it lacked glamour.

"There's no glamour. I find this very ugly," Neale said. 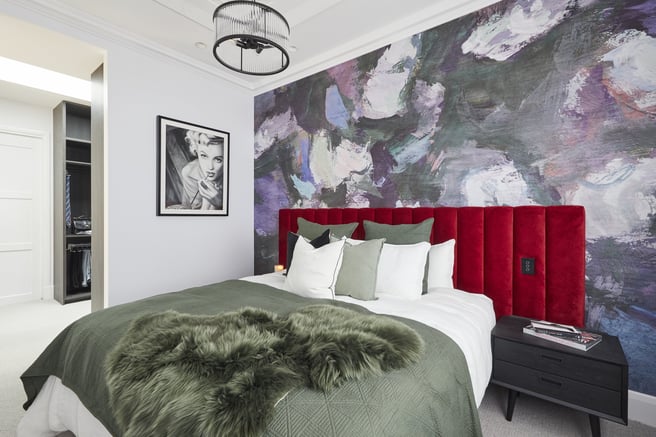 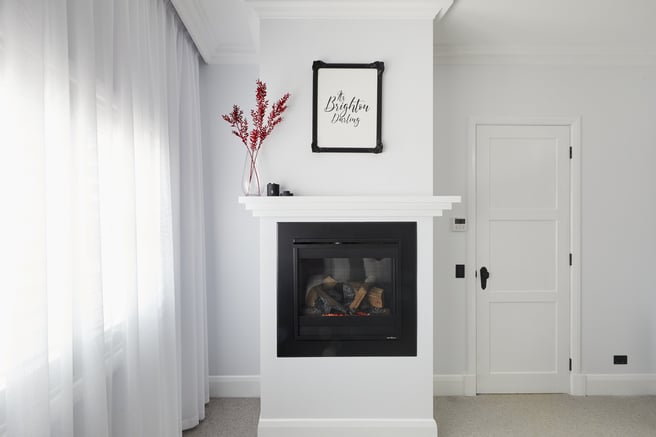 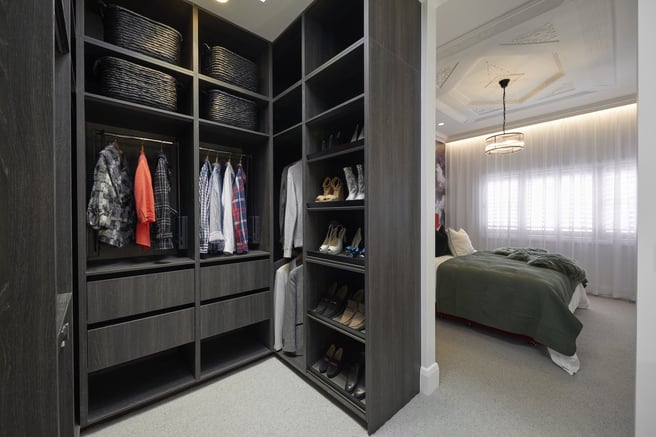 After a tough week last week, it seems Daniel and Jade nailed the 1930s brief this week.

The judges felt the master bedroom, which cost $21,800, was "very Hollywood".

The judges were also impressed with the antique gold cabinet and the floral arrangement on top of it.

However, they would have liked to see a king-size bed, rather than a queen-size bed.

"For me, a king-size bed says luxury," Darren said.

As for the walk in robe, Shaynna, Darren and Neale loved that the space incorporated great storage and glamour. 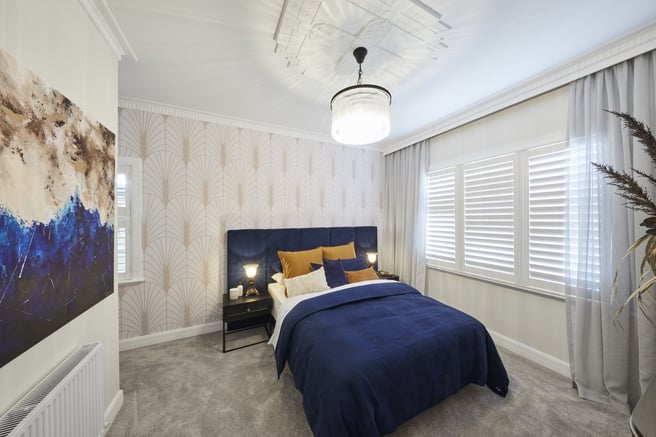 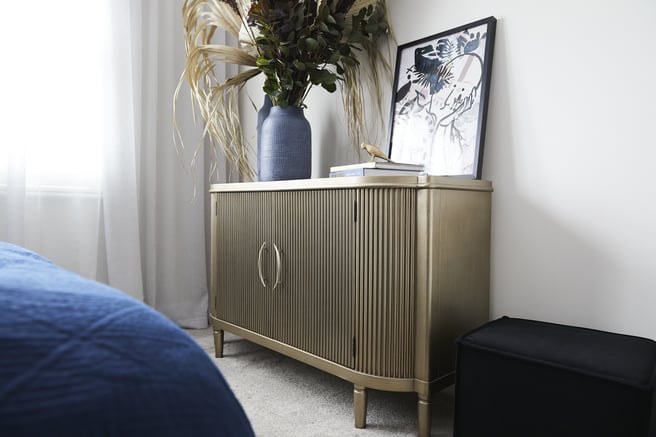 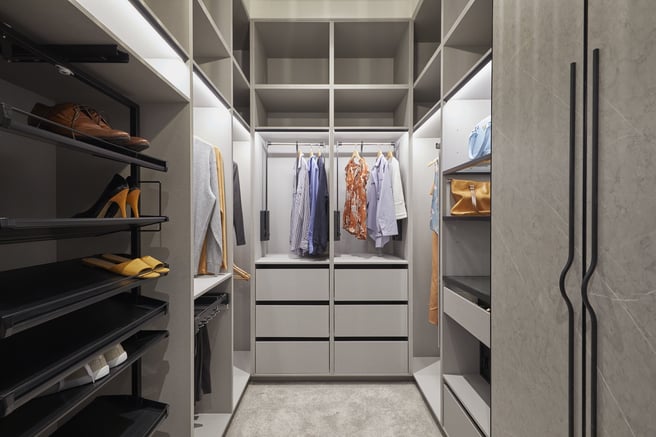 This week, Perth couple Luke and Jasmin spent $20,200 on their master bedroom and walk in robe.

After struggling to hit the 1910s brief in the last few weeks, the judges were pleasantly surprised with the couple's room.

In particular, the judges loved the bay windows and the window seat, which created a "mix of vintage and contemporary".

They also loved the four-poster bed, but were disappointed to see that it was queen-sized rather than king-sized.

Unfortunately, the walk in robe let the couple down.

With the least hanging space, the judges felt the space wasn't very functional, especially for a master bedroom. 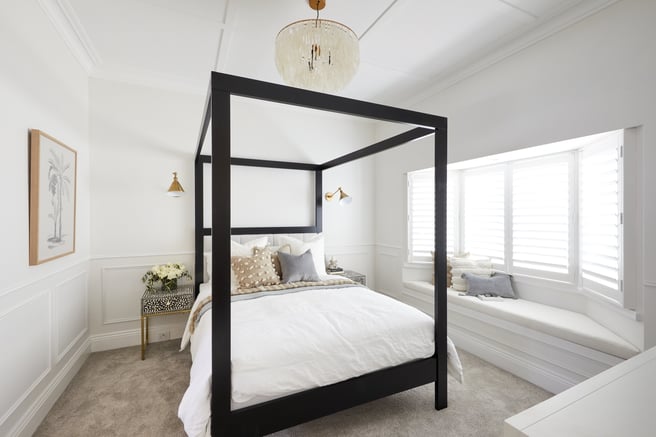 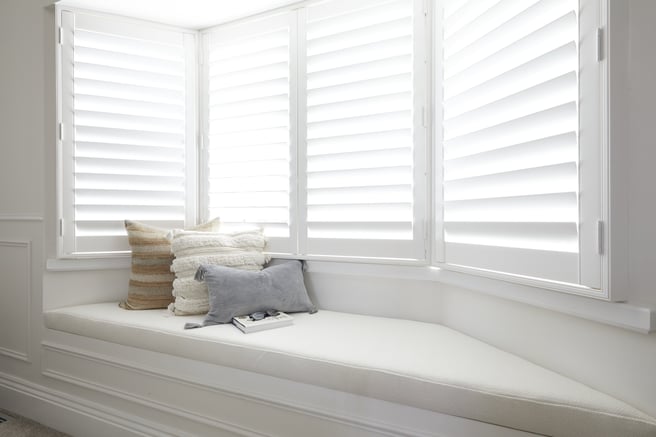 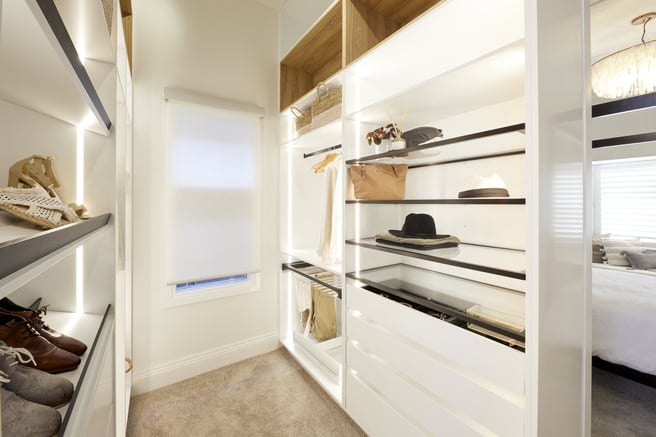 Jimmy and Tam, who have won the last three challenges, spent $32,700 on their master bedroom and walk in robe.

Unlike the other homes, the Queensland couple decided to have their walk in robe next to their master ensuite, which means anyone living there would have to walk through the bathroom to get to the wardrobe.

The judges also felt that the walk in robe was "tiny".

"This is a disaster," Shaynna said.

As for the master bedroom, Neale referred to the room as like being in a "1950s Californian motel in a technicolour movie".

The judges loved the floor to ceiling fireplace and the Slim Aarons print in the bedroom. 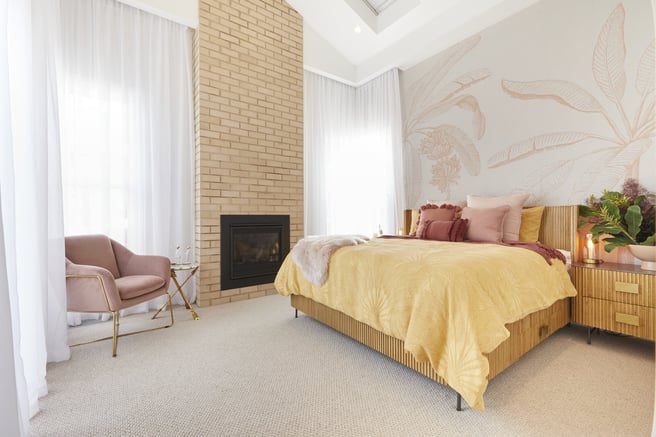 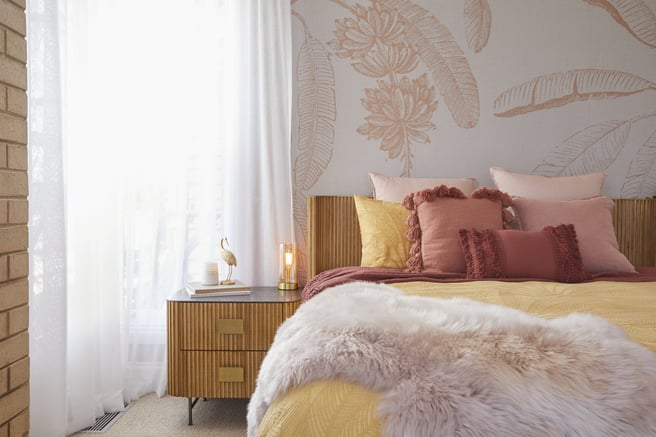 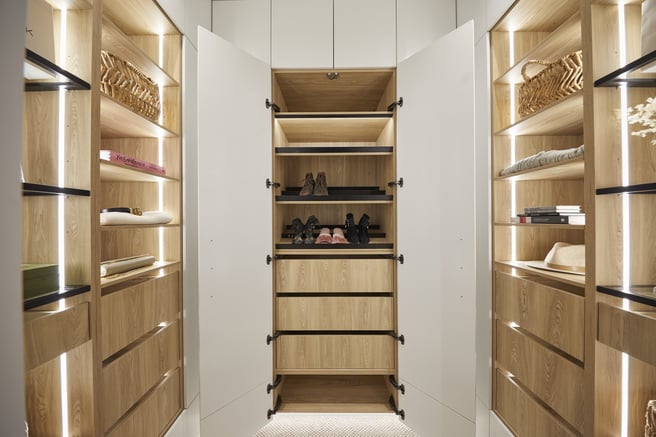 The judges' scores are tallied, and Harry and Tash win the challenge, beating Daniel and Jade and Luke and Jasmin by just half a point.

Next week, the teams will work on their master ensuite.

Want to find out more about the products used in the master bedrooms? Check out The Block Shop here.

Reply
Upvote
Nice to see some original features in these houses - the cornice, ceiling roses, picture rails, fireplaces! Tbh none of these really wowed me, but I do quite like the 50s one. It will be interesting to see the houses as a whole at the end of the series.
M
mamamia-user-556745246 2 years ago