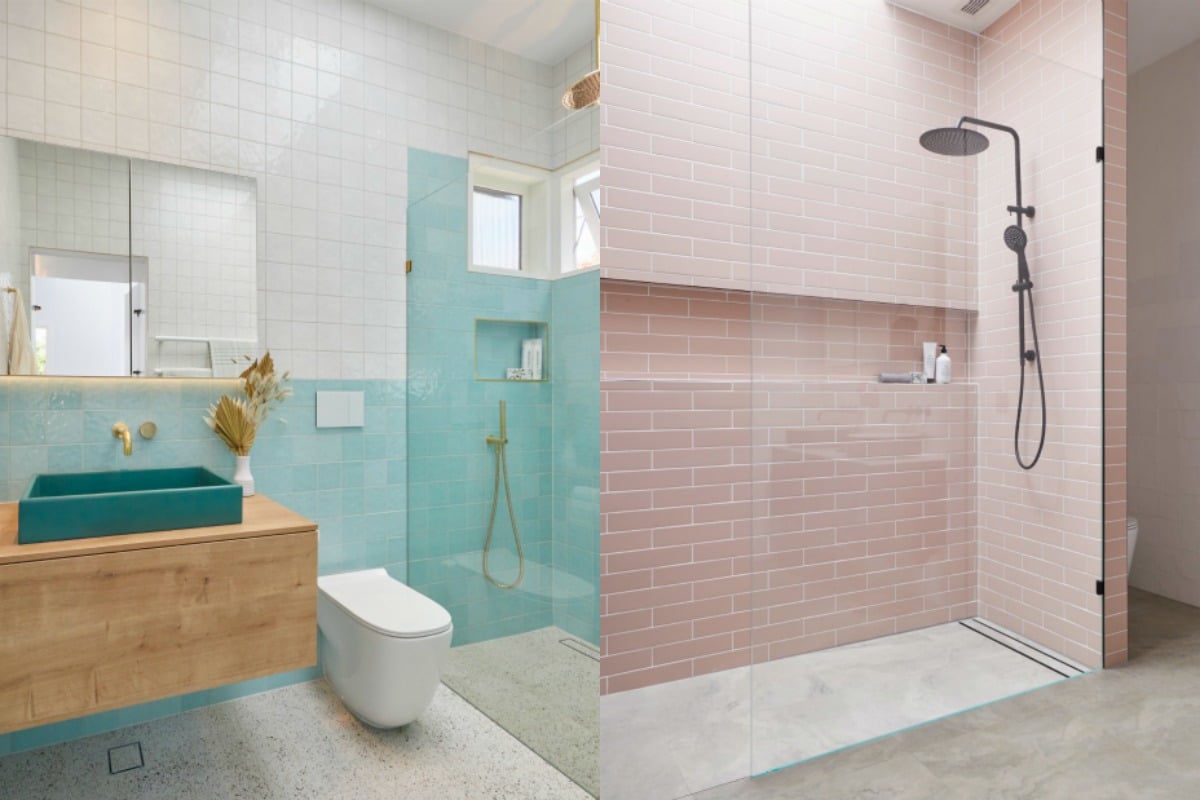 This season, the teams have been assigned houses from the 1910s to the 1950s, meaning they need to stick to that theme throughout their build.

But although some couples successfully nailed the brief in their guest bathroom, others failed to impress the judges.

Here are all the photos from The Block's guest ensuite reveal:

First up are Victorian father and daughter duo, Harry and Tash, who spent $18,600 on their guest ensuite.

Although the judges were "blown away" by the pair's guest bedroom reveal last week, Harry and Tash's guest ensuite didn't exactly hit the brief.

The judges praised the skylights and the high ceilings in the bathroom, as well as the "curved edges" of the bathroom cabinet.

But overall, Shaynna felt that the style of the bathroom didn't suit the 1920s brief.

"If you're going to do the 1920s, don't bring another era into it," Shaynna added, pointing out the floor tiles.

The judges also felt that the three different tiles throughout the bathroom didn't work together. 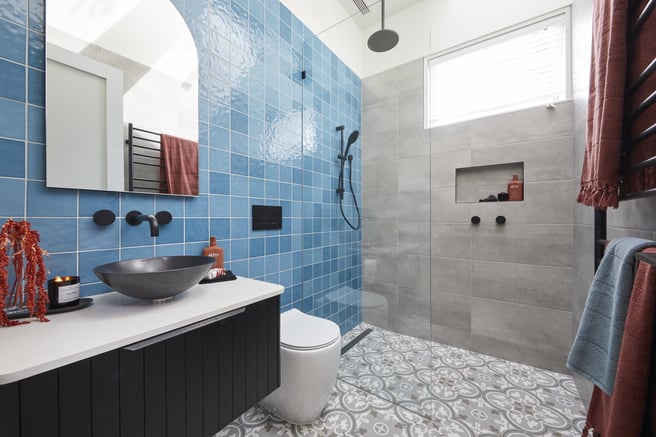 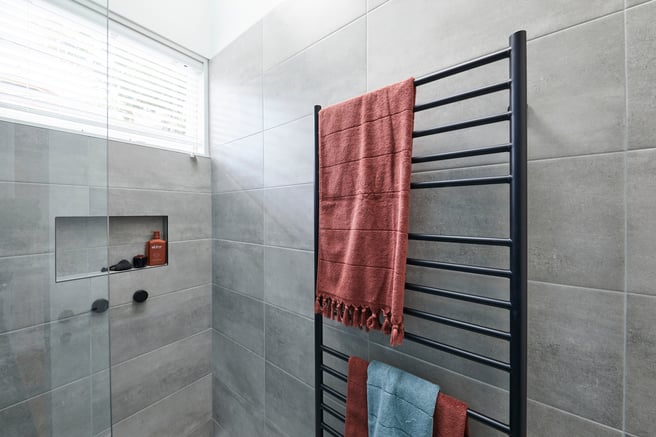 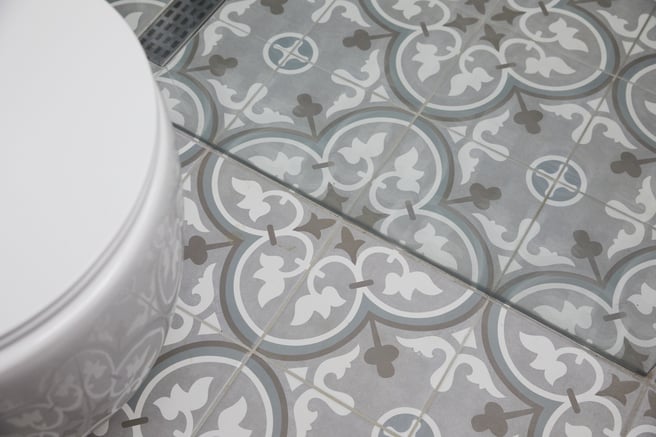 Sarah and George, who are working on a house from the 1940s, spent $20,000 on their guest ensuite bathroom.

After receiving negative feedback on their guest bedroom last week, the pair wowed the judges with their ensuite.

"The 1940s have never looked so glamorous," Neale said upon entering the bathroom.

The judges were impressed with the "luxury look" of the ensuite, as well as the pink tiles and "daggy slippers", which were a subtle nod to the 1940s.

As for that interesting black toilet paper used by the couple, you can buy your own right here. 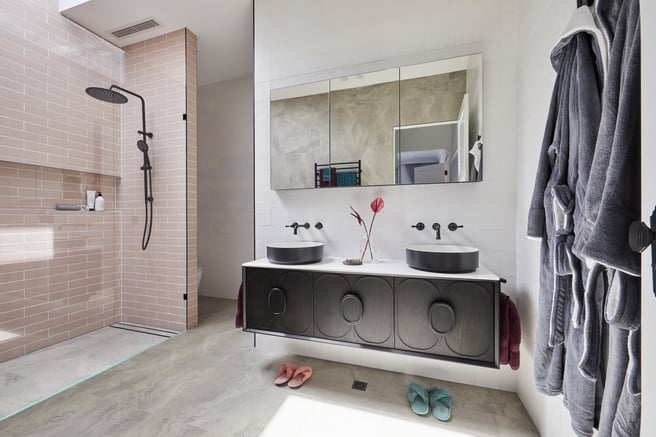 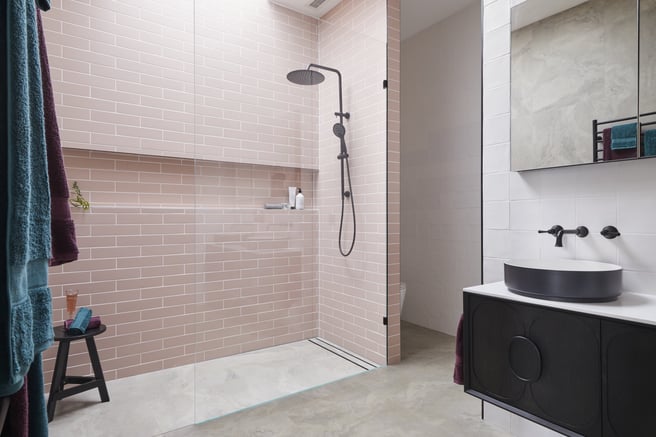 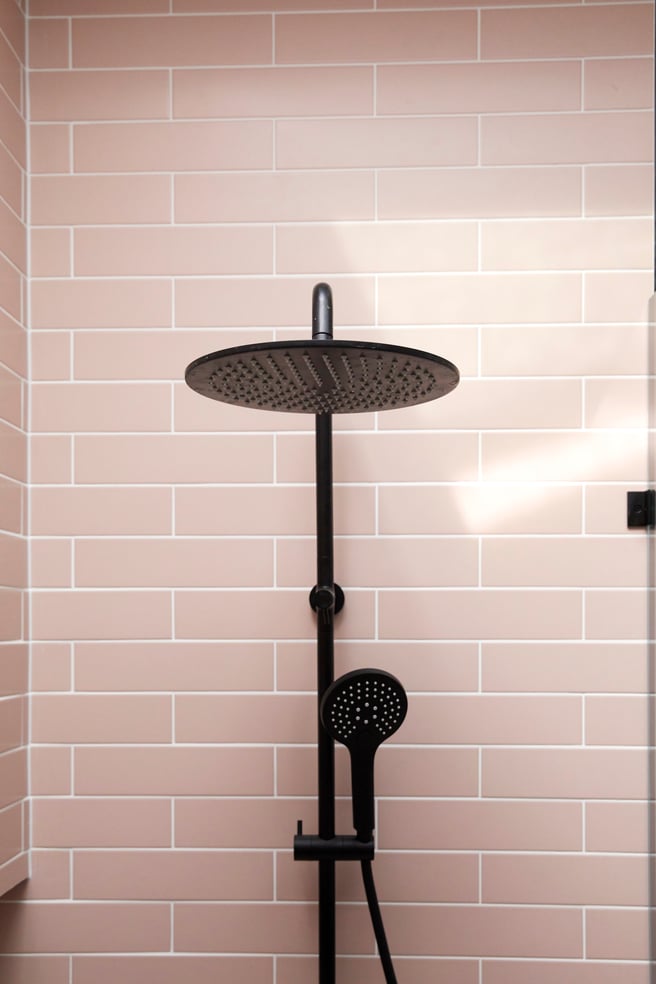 The couple had to leave the show temporarily after the death of Daniel's grandfather in South Australia.

After returning, the pair completed their 1930s guest ensuite, which the judges described as very contemporary.

Although the judges thought the bathroom was luxurious, there weren't many nods to the 1930s era.

Instead, the judges described the bathroom as "very 2020".

"It's a cop-out. They have not acknowledged the period of the house. They have given us a generic, contemporary bathroom," Neale said.﻿ 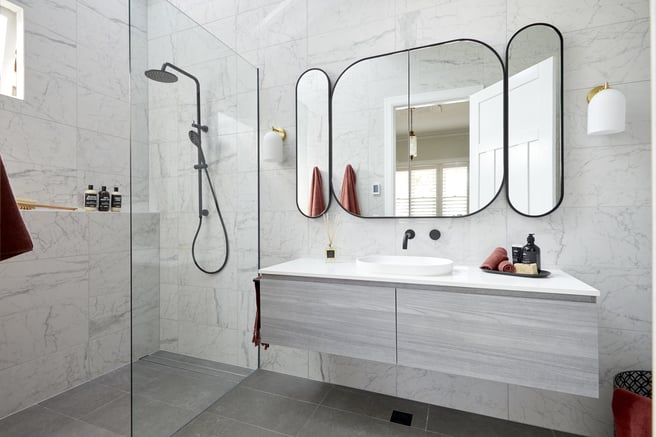 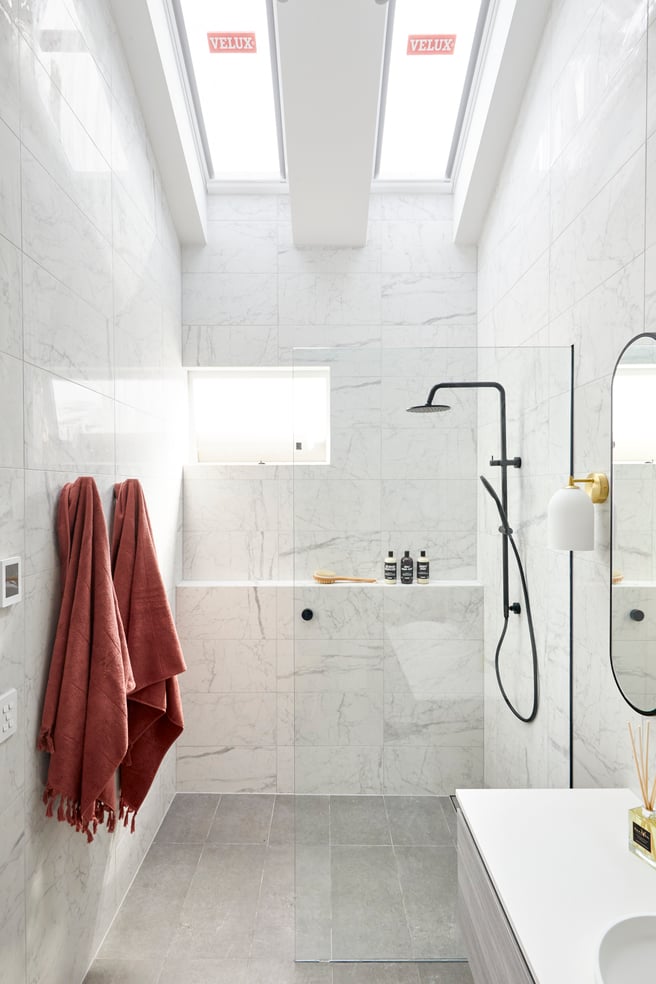 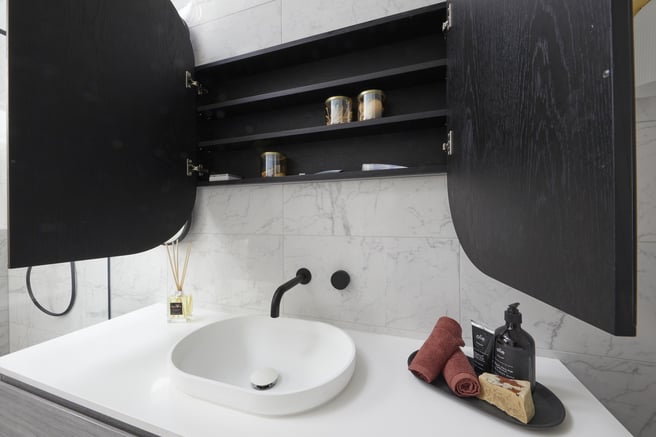 After judge Darren visited Luke and Jasmin throughout the week to give them some tips on their 1910s ensuite, the couple pulled it off on a budget of $25,300.

"This was exactly what I wanted to see," Shaynna said after entering the bathroom.

The judges loved the "reeded" shower screen, which fitted in well with the VJ panelling and the "delicate" floor tiles.

The judges were also a fan of the basin and the oak bathroom cabinet, but found that the bathroom didn't have enough storage space. 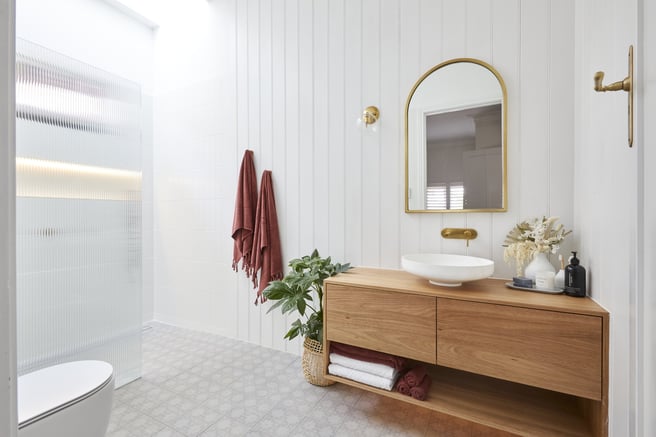 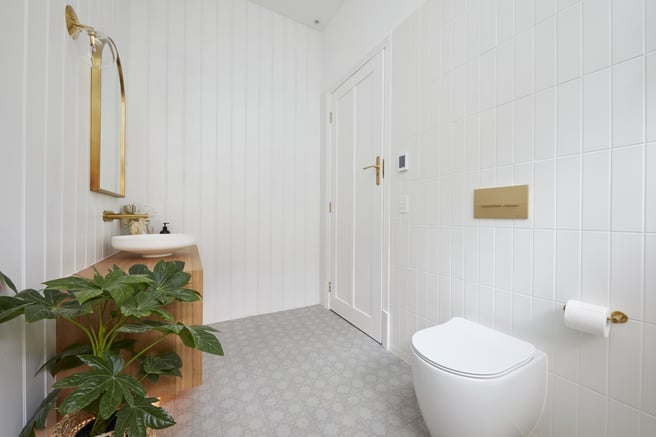 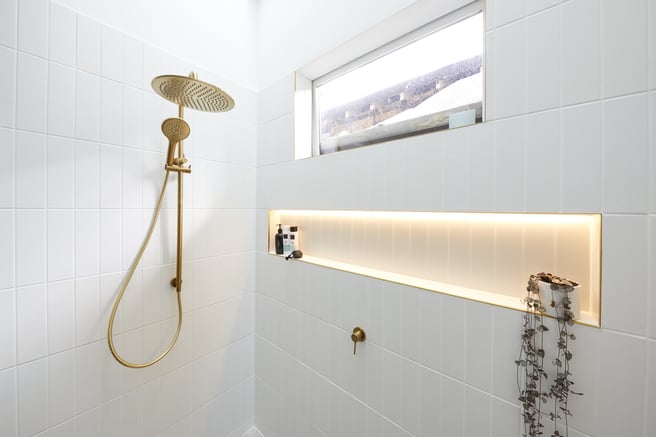 After entering Jimmy and Tam's guest ensuite, Darren compared it to a public pool change room.

Thankfully, however, he meant it as a compliment.

"I don't remember the last time I walked into a bathroom which put such a smile on my face," Neale added. 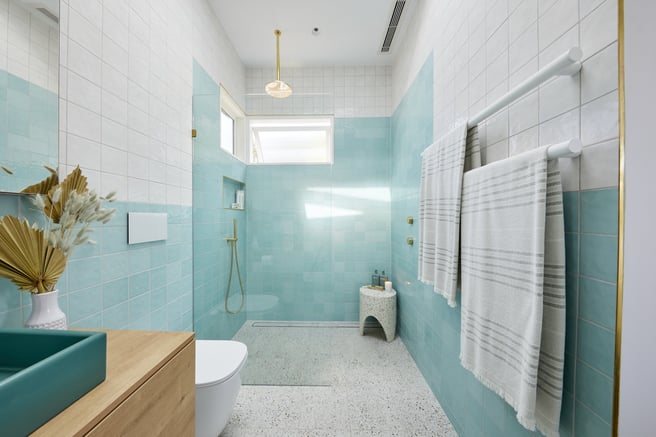 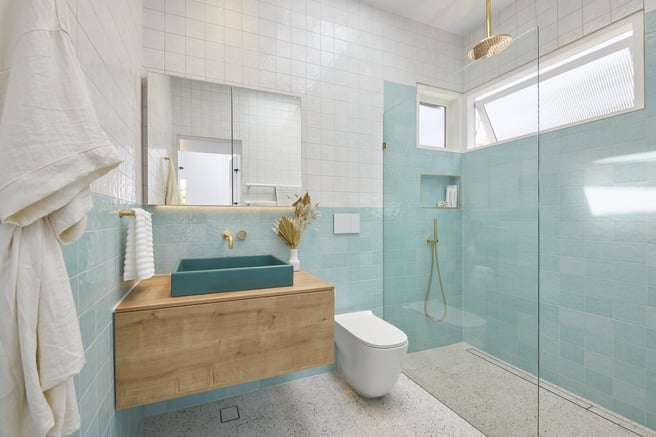 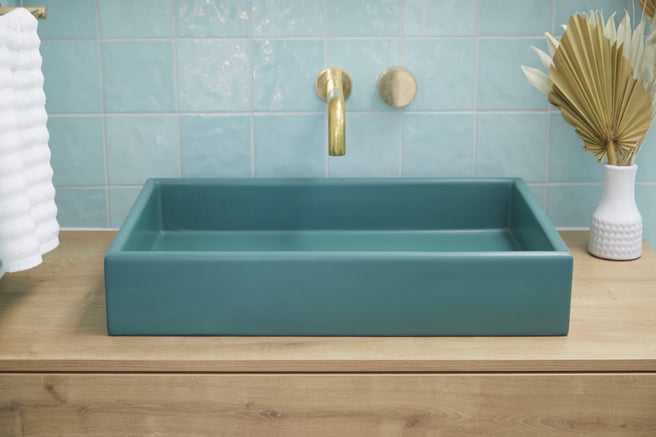 The judges' scores are tallied, and Jimmy and Tam win the challenge for the third week in a row.

Next week, the teams will work on their master bedrooms.

The Block continues on Monday night at 7.30pm on Channel Nine.

Want to find out more about the products used in the guest bathrooms? Check out The Block Shop here.

Reply
Upvote
3 upvotes
I'm not watching the show (I just like seeing the pictures), so perhaps someone who does watch can help me out. Are they supposed to be renovating to suit the era of the house? Don't they have to buy all their furniture/fittings etc from certain stores (eg: Freedom)? If they only have certain approved suppliers, doesn't that mean their style is going to be limited to whatever those suppliers have available?
I'm a little disappointed to see those sad slippers and robes. They could at least have gone for the old Hollywood glam high heeled slippers and feather-trimmed peignoir!
<
<deleted> a year ago