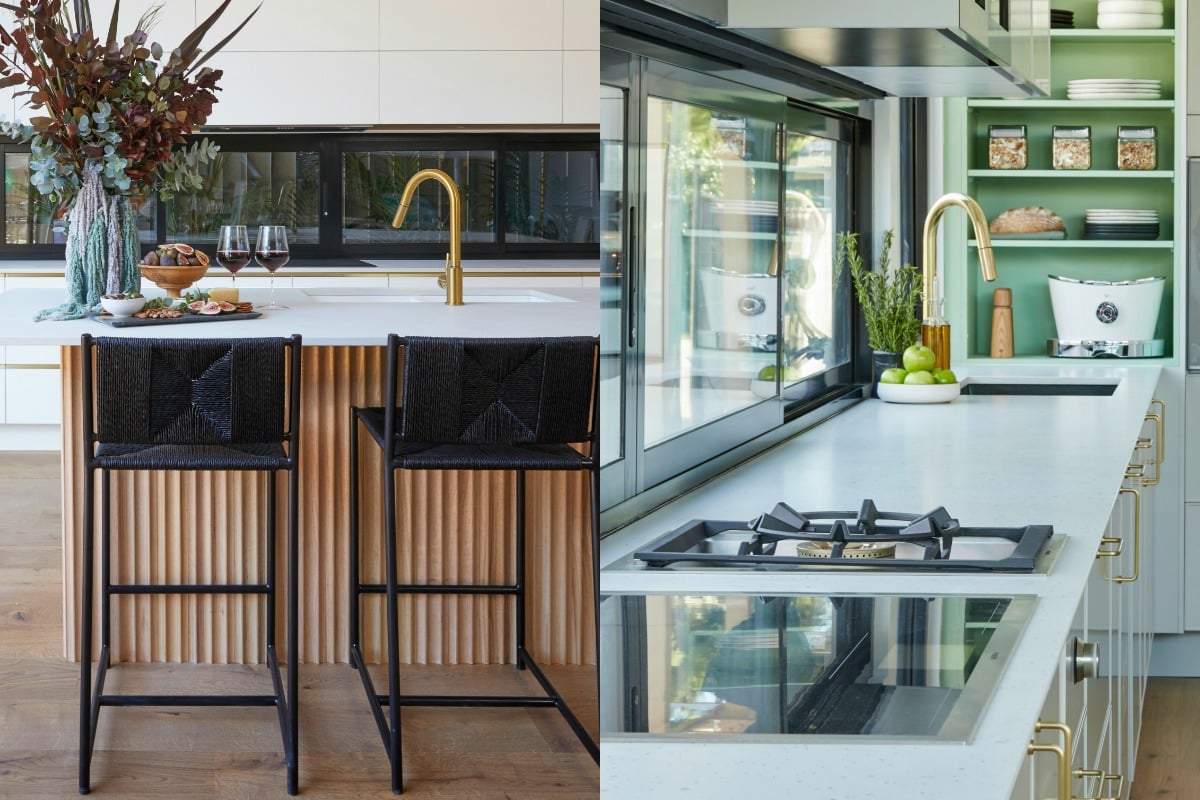 This week on The Block, the five couples renovated their kitchens.

But that didn't stop the copying allegations.

As the couples approached the room reveal, Daniel and Jade became concerned that Luke and Jasmin may have copied their curved island bench.

"I'll let the public decide at home. If they've changed [their design], the cameras will pick that up," Daniel said.

The room in question was one from an Inside Out magazine photoshoot, which was created by The Designory.

"I showed everyone that picture while we were filming, saying it was my inspo. It wasn’t a secret," Jasmin said.

"You’re calling it inspiration. Inspiration is one thing. Completely taking someone’s idea and making it your own is another," Shaynna replied.

"We’re in a competition, and you won a room where you make money. You haven’t changed it up enough."

Here are all the photos from The Block's kitchen reveal:

The father and daughter duo's stand out piece in their kitchen was their 4.3 metre long island bench.

"This is a catwalk," Shaynna said upon seeing the "magnificent" bench.

"If I had to describe the perfect kitchen for 2020, it would look something like this," Neale added.

The judges loved the timber flooring, plus the hidden sink and coffee machine.

They were also impressed by the ducted vacuum system, and the "functional" Butler's Pantry. 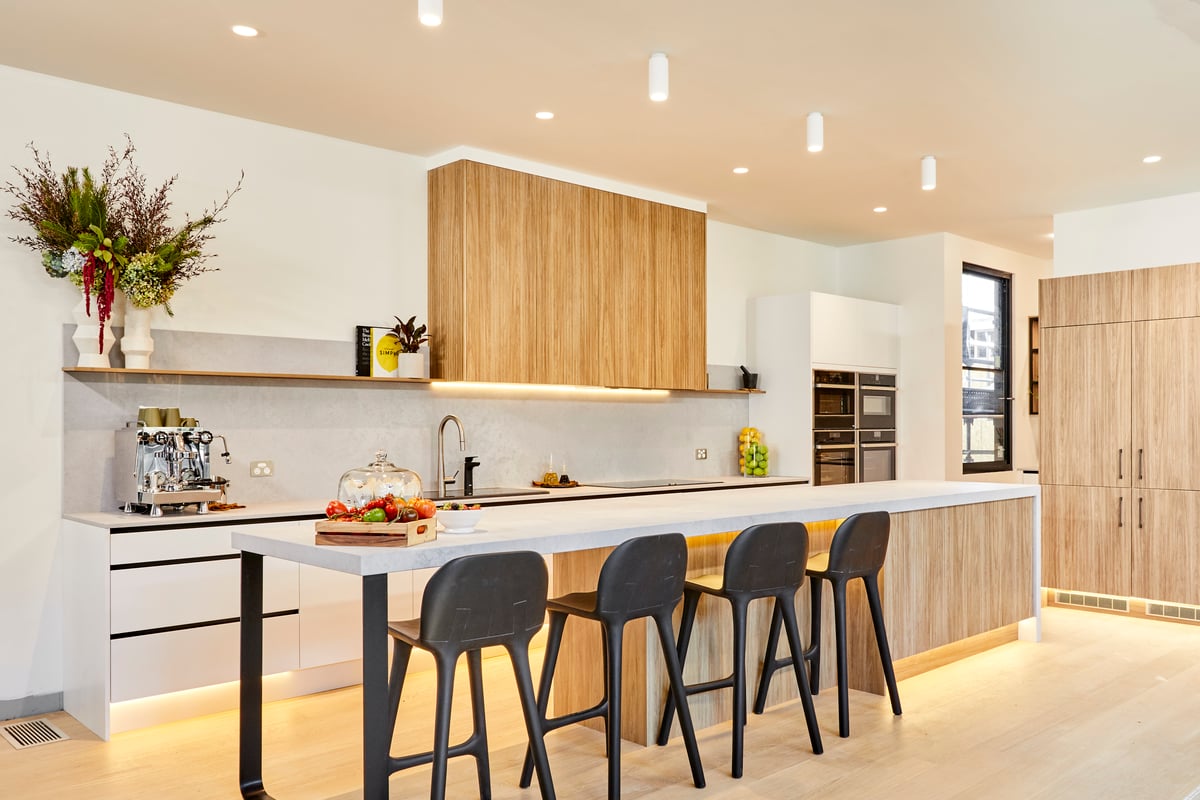 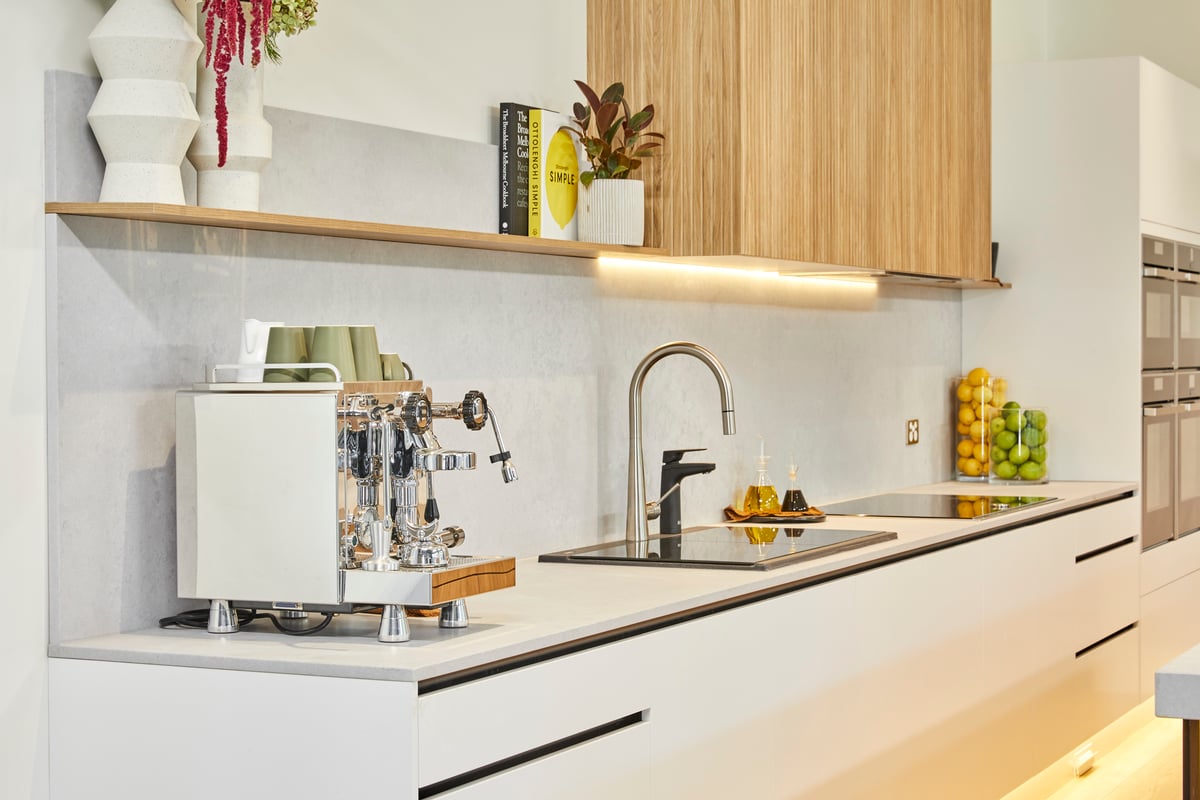 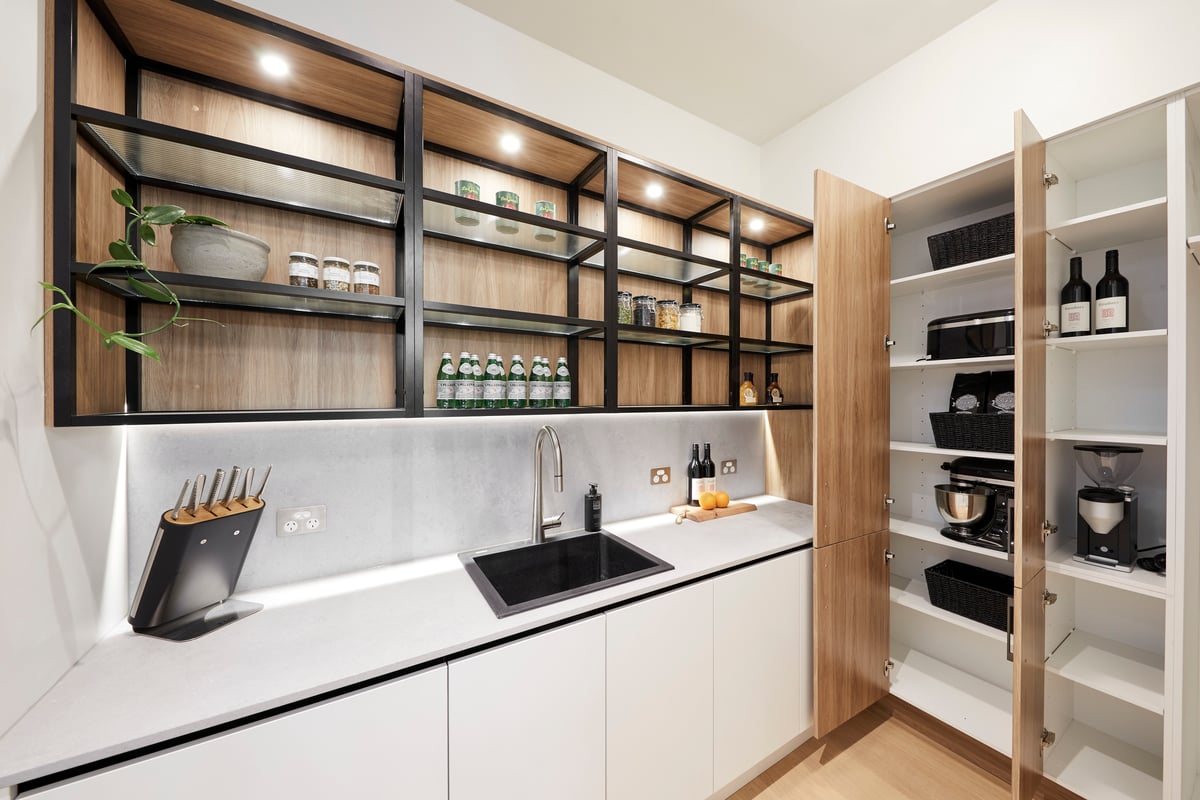 Sydneysiders Sarah and George and their 1940s home were up next.

This week, the couple spent $20,900 on their double upstairs room, which featured a handcrafted dolomite stone curved bench.

When the judges entered the kitchen, Darren immediately hugged the end of the kitchen bench.

All three judges were impressed with the workmanship on the bench, as well as the black and white colour palette.

The judges thought the overhead cabinets gave a nod to the heritage of the house. However, they thought they were placed too high, as Shaynna struggled to even reach the bottom shelf.

In general, the judges were a fan of the overall kitchen layout, and the electronic Louvre glass window cabinet in the Butler's Pantry.

Neale described Sarah and George's room as "immaculate" and a "forever kitchen".

"This is never, ever going to date," he added. 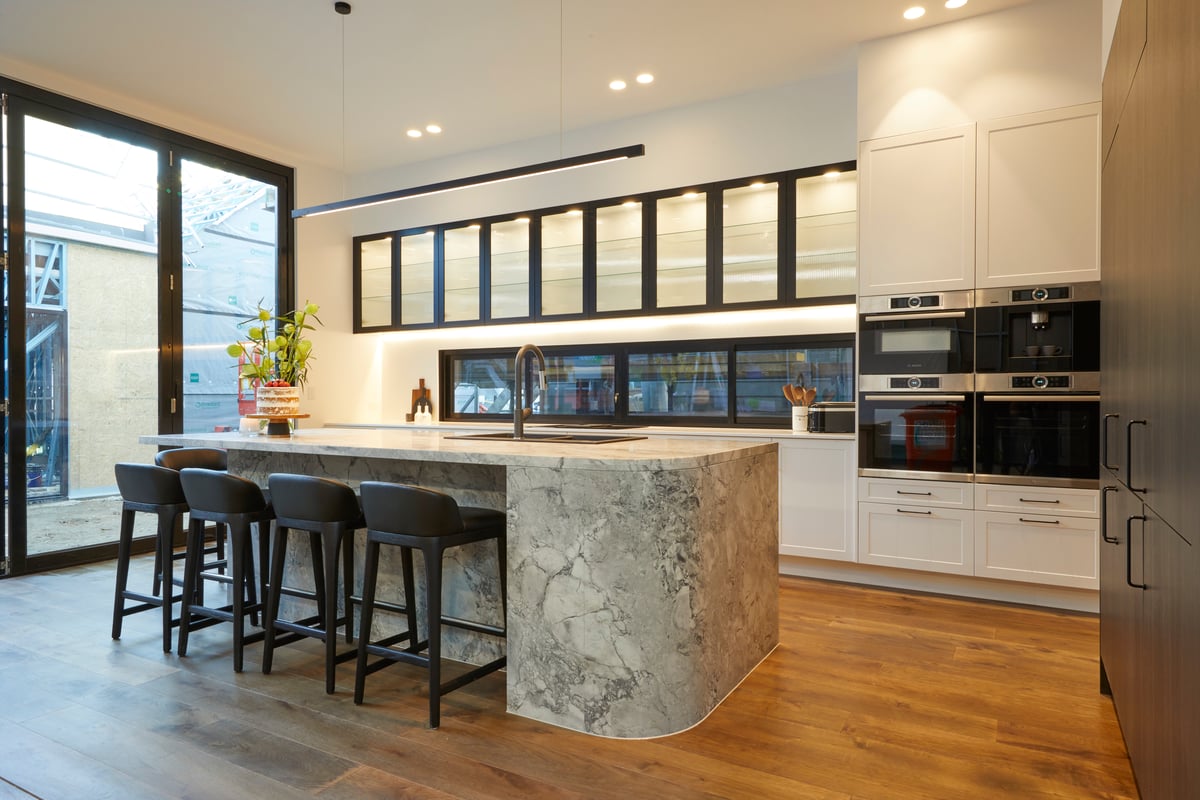 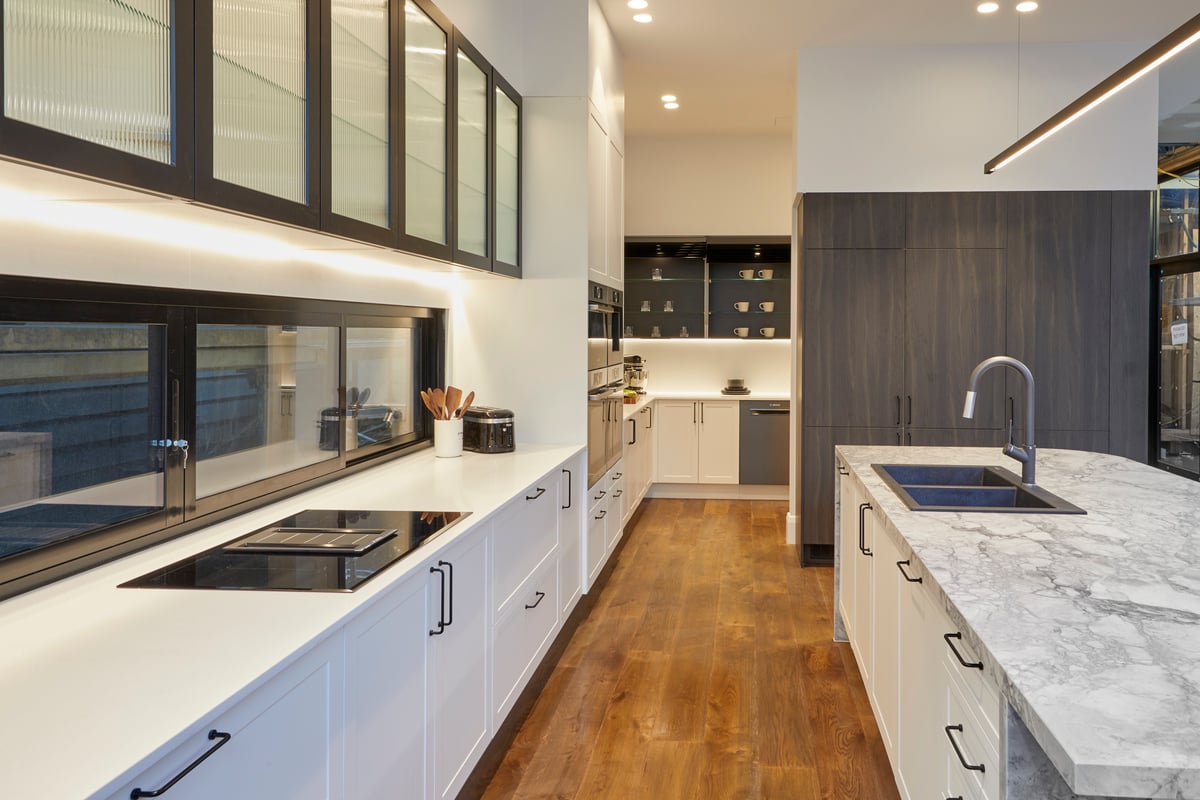 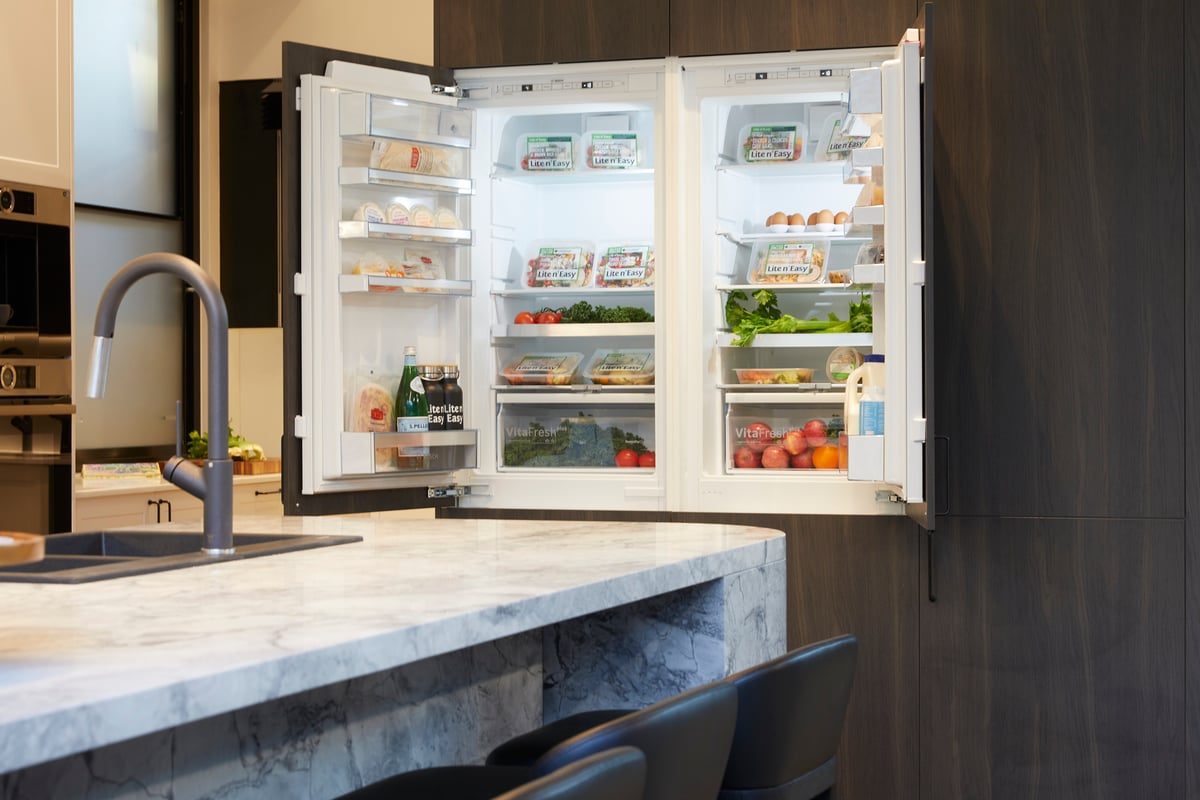 "That is beyond a work of art," Shaynna said, after seeing the bench.

"It's a beautiful nod to the deco era," Neale added.

While the judges loved the bench and the whiskey cabinet, Darren wasn't sold on the lighting in the kitchen.

Regardless, the judges loved the colour choices throughout and the overall design.

Over in the Butler's Pantry, the judges felt that it was like a whole extra kitchen.

"This has gone way beyond Butler's Kitchen," Neale said. 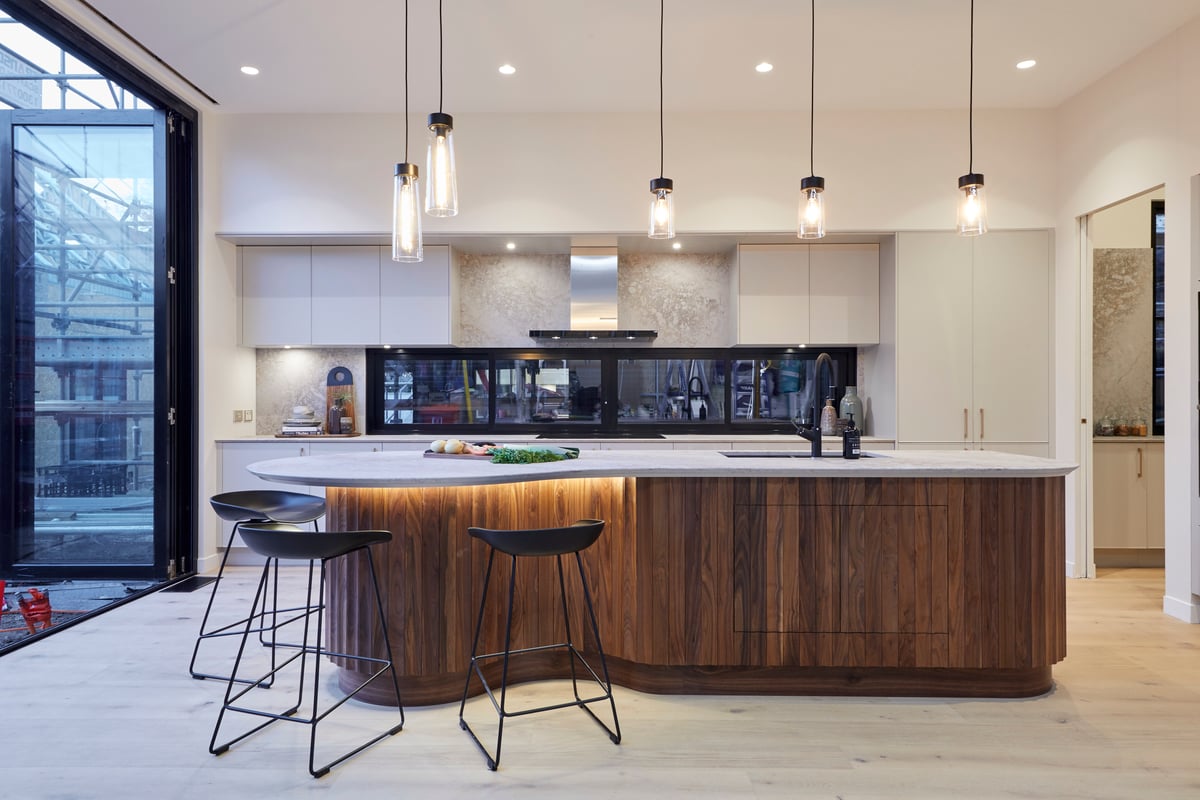 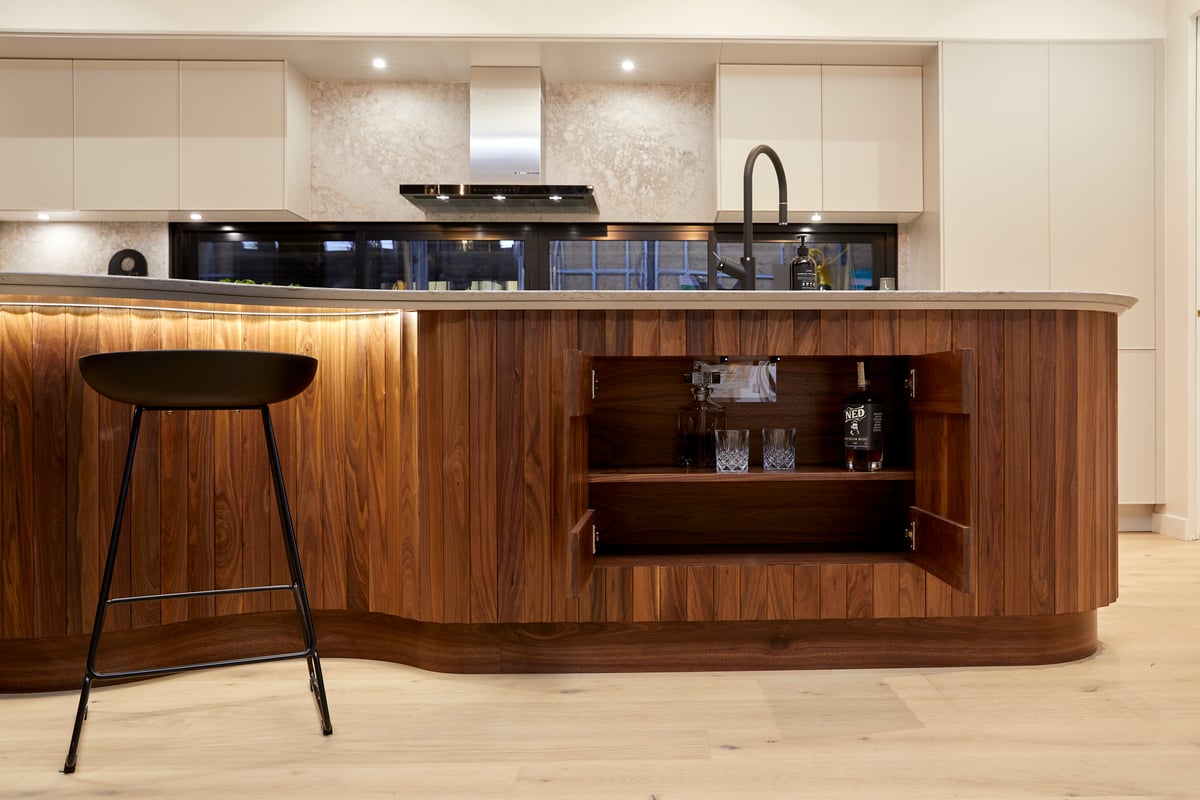 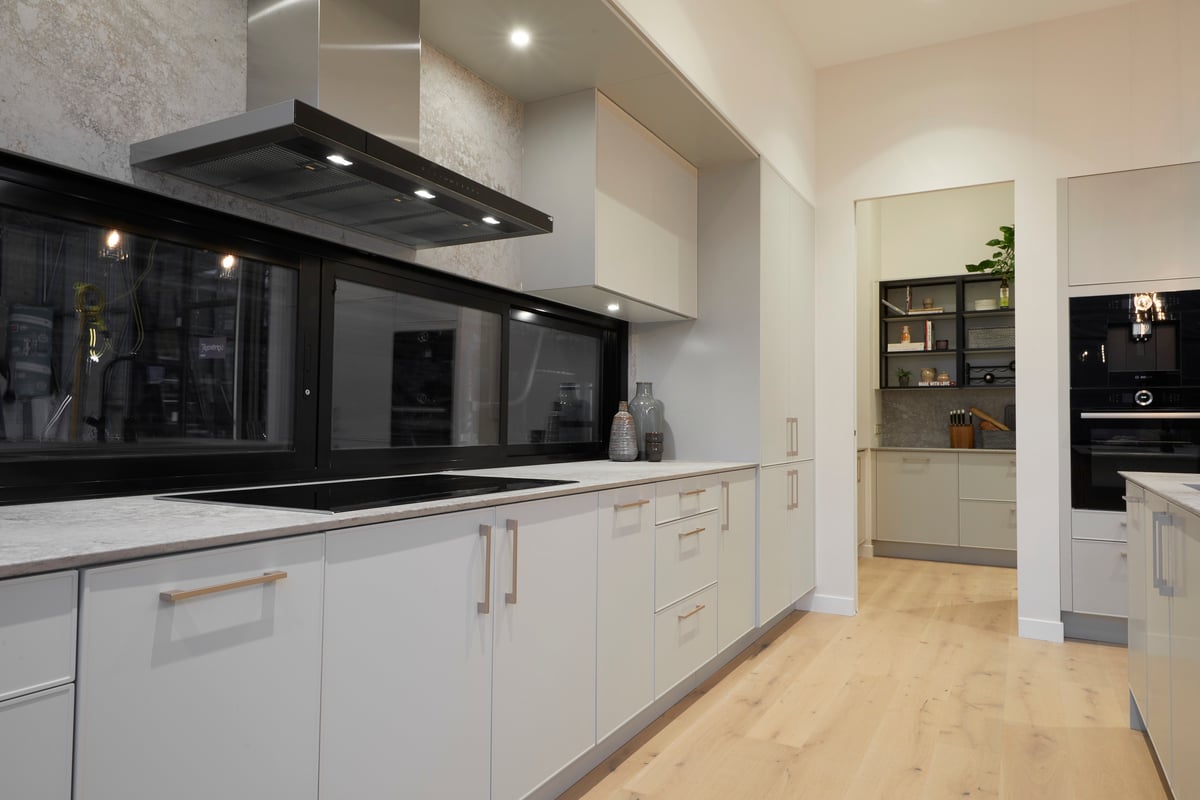 After dealing with several copying allegations this week, Luke and Jasmin were up next.

Instantly, the judges were impressed with the porta timber curved wall, which is one of the overall statement pieces of their entire home.

"I feel like I'm seeing things that I haven't seen before. These are kitchens are ahead of the curve," Neale said.

The judges loved the joinery, colour palette, flooring and the pendant light used.

However, Shaynna pointed out that there was a lack of power points throughout the kitchen.

As for the Butler's Pantry, the judges loved the pull-out pantry. However, they weren't a fan of the open shelving and baskets. 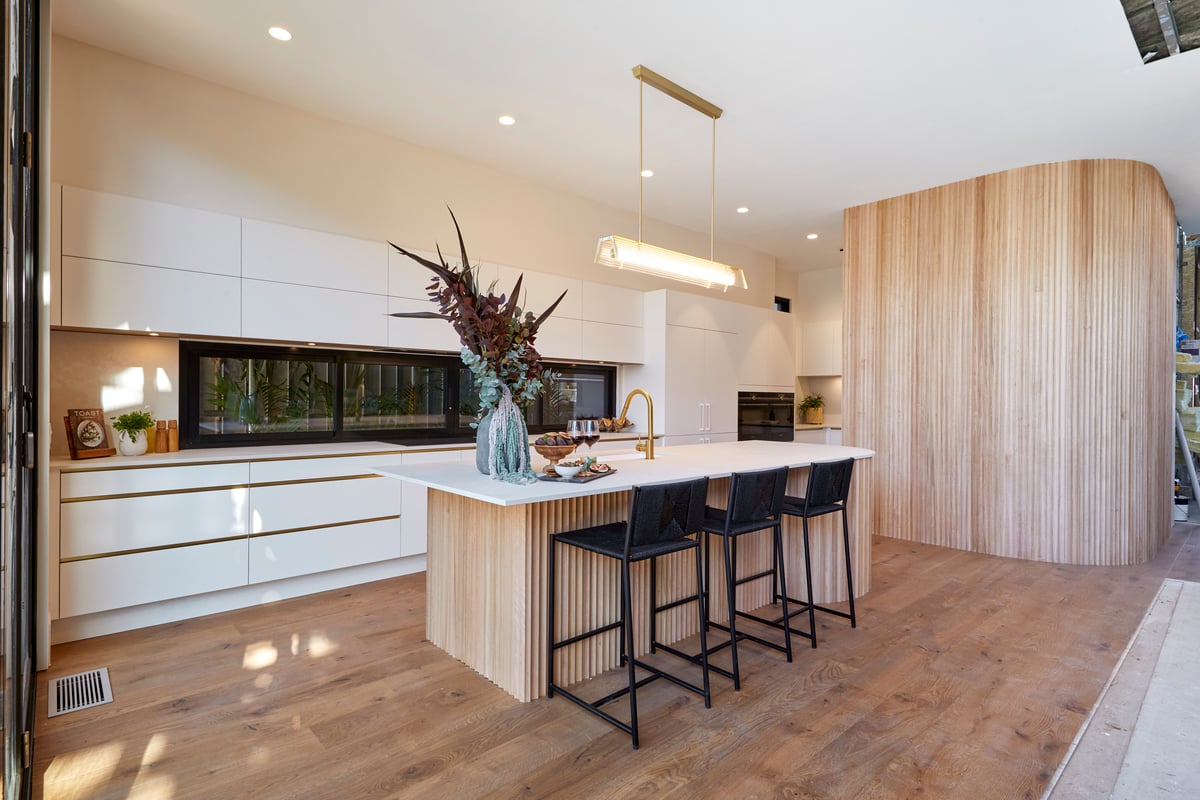 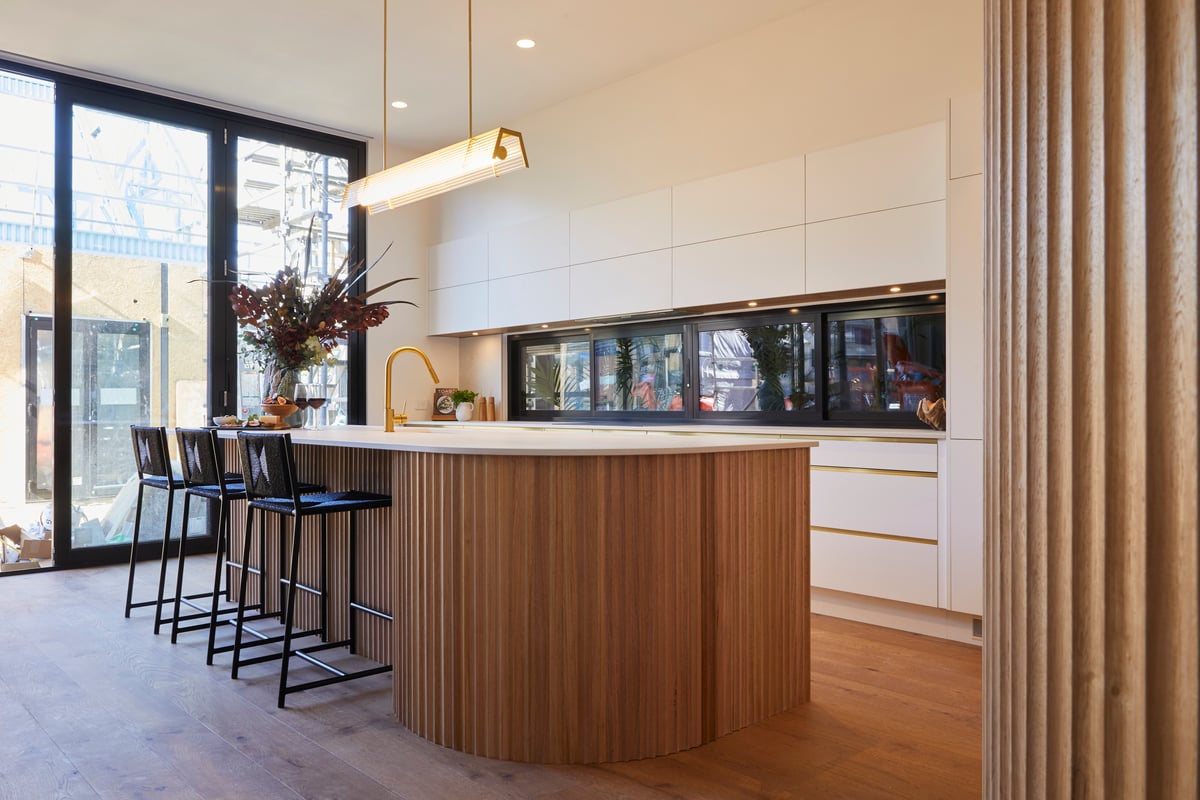 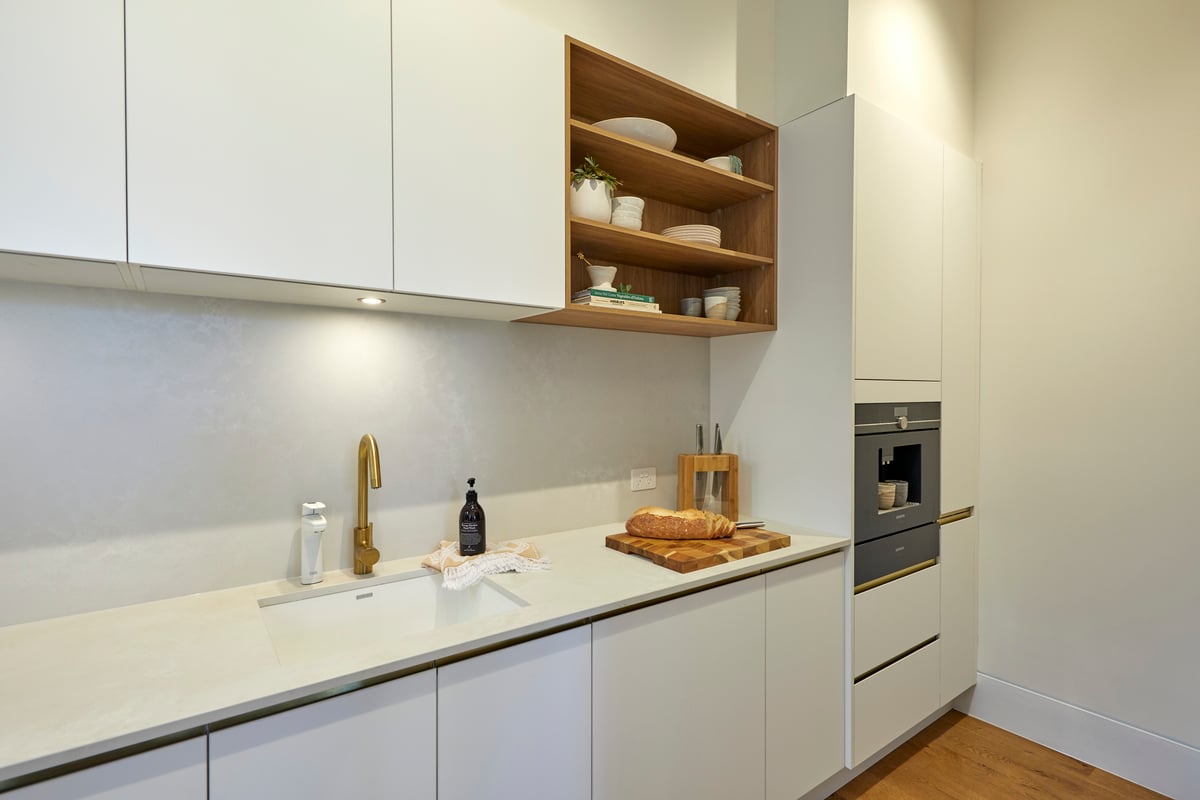 Brisbane couple Jimmy and Tam and their 1950s house were up next.

This week, the couple spent $31,300 on their kitchen, which included $120,000 worth of Gaggenau kitchen appliances that the pair won.

Upon entering the kitchen, Darren was surprised that the mint green, brass and dark charcoal colour palette worked.

"It shouldn't work but it does," Neale added.

They loved the colour choice for the stone island bench top, and the hidden fridge.

They were also surprised to find $5,000 worth of vintage wines in the wine cooler.

"This is a kooky kitchen. It isn't something you see in a catalogue," Darren said.

Overall, the only criticism the judges had was the height of the stools. 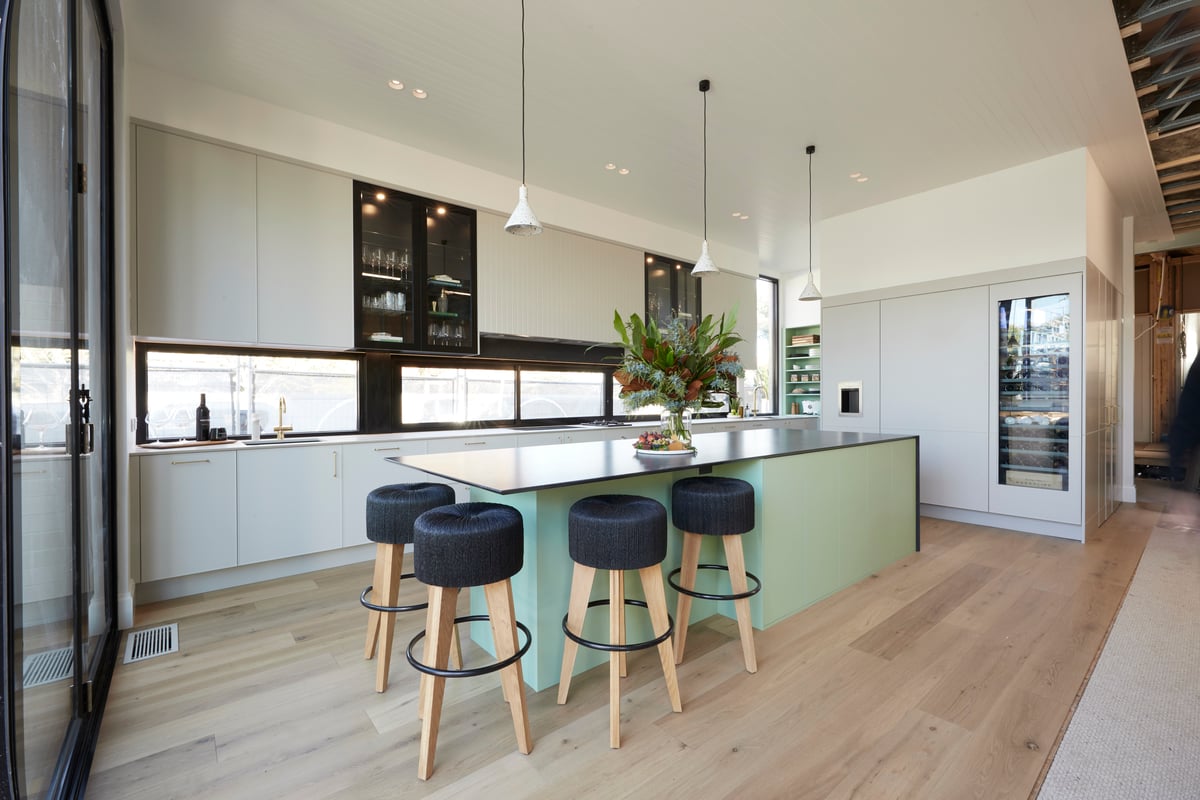 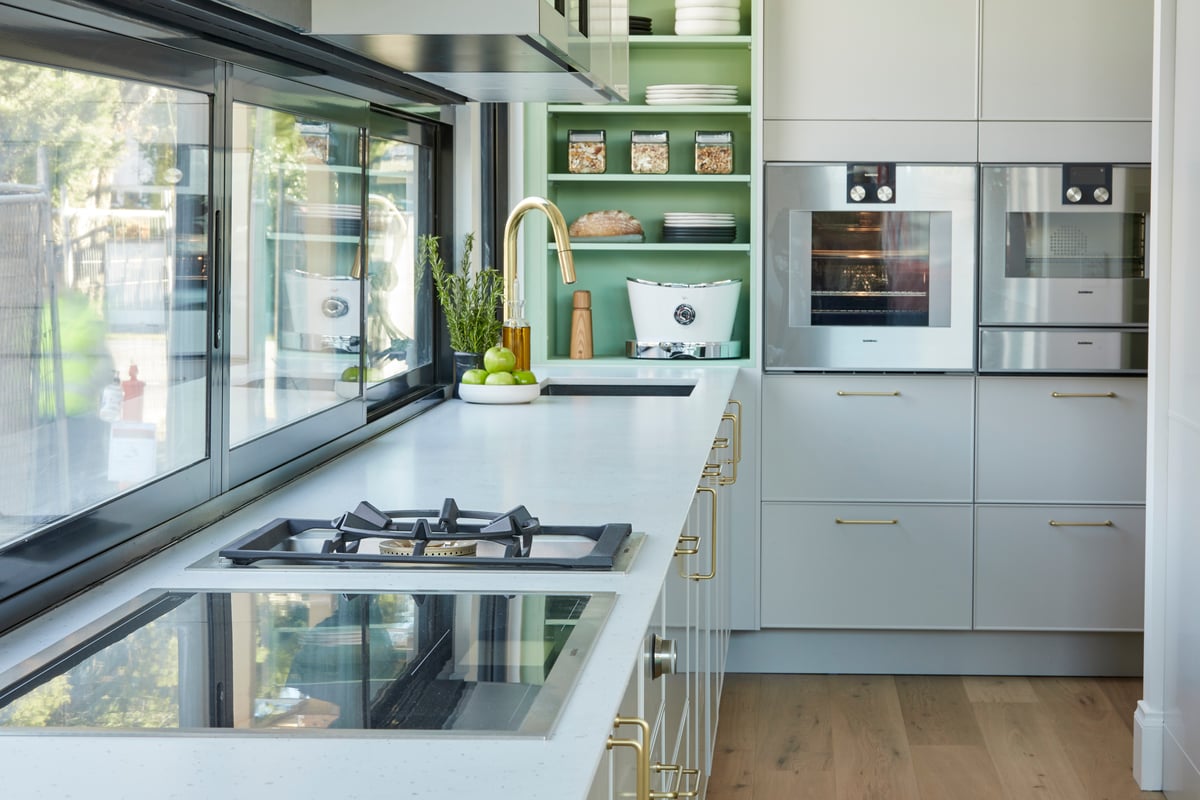 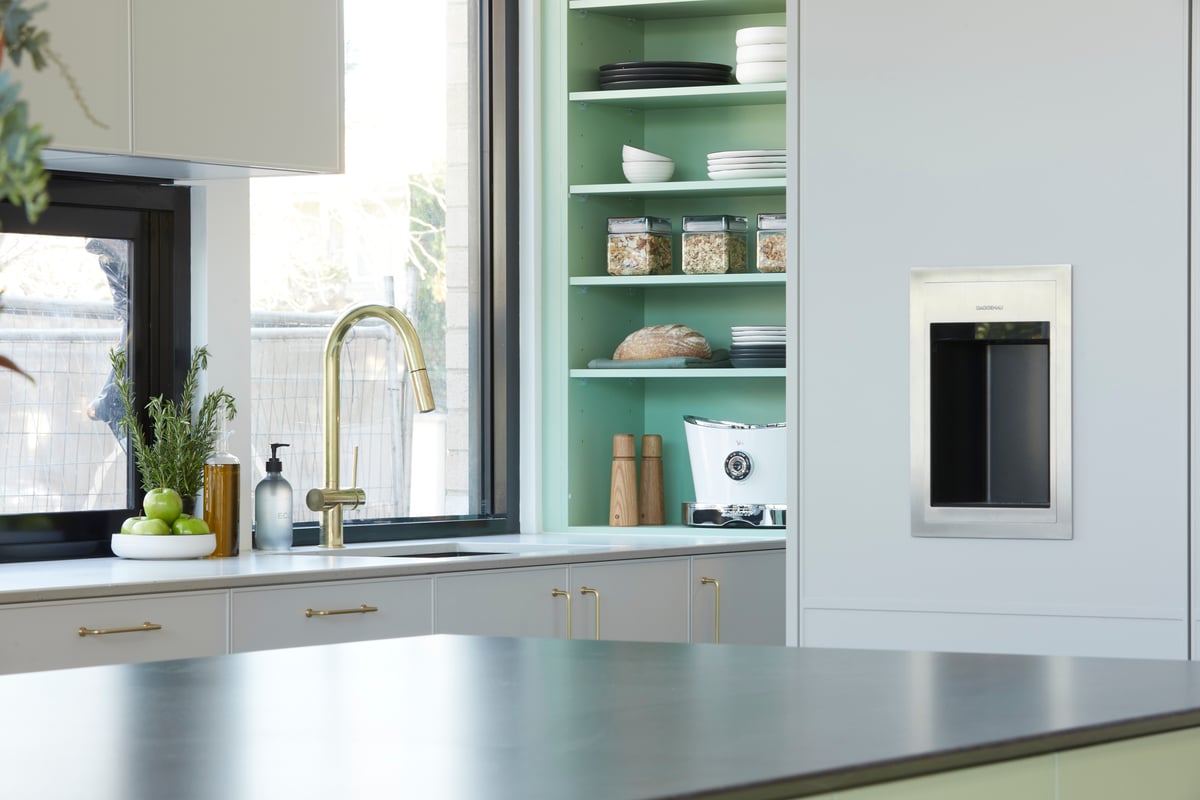 The judges' scores are tallied, and Daniel and Jade use their gnome which gives them an extra point. As a result, the South Australian couple (just) took out the win.

Next week, the teams will work on their living and dining spaces.

Want to find out more about the products used in The Block kitchens? Check out The Block Shop here.

Reply
Upvote
Agree with the commenter below! We’ve just renovated our (tiny) kitchen, and cabinetry alone was about $23k. Then there’s benchtops (add another $6k for 40mm Caesarstone) and $10k for appliances (a fridge, 2 ovens, range hood and dishwasher), flooring ($2k) and new gaslift window ($3k). Sink was $500, pendants and downlights $500, electrical and plumbing close to $1000. Add in painting.
All up that’s about $46k for a kitchen that is maybe 12m2 - nothing like the behemoths completed on the Block. Drives me mad seeing the misleading prices which pop up each week!
S
simple simon 2 years ago

Reply
Upvote
@simple simon sorry forgot to include a 90cm induction cooktop also. And I know, we were as surprised as you! We had quotes from a number of reputable kitchen companies, including kinsman and kitchen connection, all came in around that mark. Even our builder’s cabinetmaker quoted $20k for cabinets, but he was less flexible with design. We were not at all expecting it to come in at that cost. Of course, if you’re putting in a Kaboodle kitchen, or an IKEA one, you can expect to spend less. But my point is that’s certainly not what they’re doing on the Block.
S
simple simon 2 years ago

Reply
Upvote
2 upvotes
@em I think the issue with The Block (and really, all these home renovation shows) is that they are not including all the labour costs. There would be an army of tradespeople working on these renovations, all charging a pretty penny, but they always seem to leave that out.
R
rush 2 years ago

Reply
Upvote
1 upvotes
@em we did a very small budget kitchen reno a few years back, using the Kaboodle cabinets. All up, with budget appliances and my handy husband acting as builders labourer, we still spent around 15 grand, and that's on a space about a third of the size of these ones. These pricings are very suss IMO.
M
mamamia-user-888398248 2 years ago

Reply
Upvote
2 upvotes
Re The Block
The prices that were given for the Kitchens delivered seems to be so inexpensive
In today’s world you cannot buy the Winning Kitchen for under $20,000.00
Can you please advise, if the White Goods ,or Joinery Items, are donated as a form of
Advertising.As the sums do not add up .A great topic of conversation for around the table as many, would love a new kitchen ,if we only had their budget.
Thankyou
Jennifer
News
General
Opinion
True Crime
Politics
Sport
Explainer
Entertainment
Celebrity
Reality TV
Movies
TV
Books
Rogue
Royal
Lifestyle
Beauty
Fashion
Weddings
Home
Wellness
Health
Fitness
Travel
Food
Family
Before The Bump
Pregnancy
Baby
Kids
Teens
School
Parent Opinion
Work & Money
Money
Finance
Career
Lady Startup
Relationships
Sex
Dating
Separation
Friendship
Family
Real Life
Couples