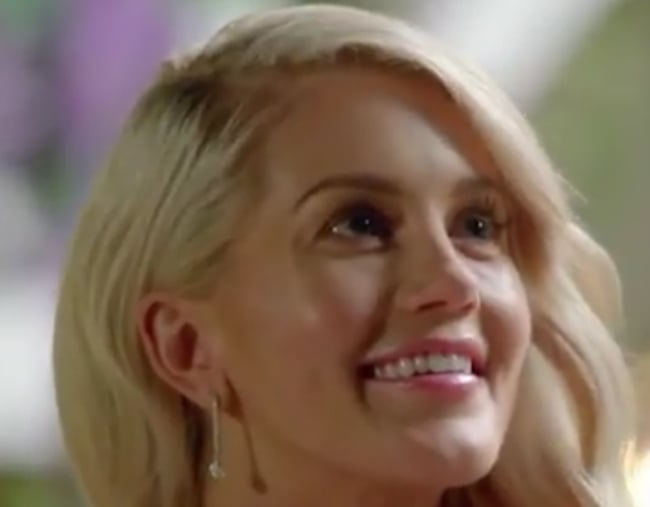 Call us old-fashioned, but there are a few things about The Bachelor and The Bachelorette that are essential for the success of the series.

There must be contestants who are uncharacteristically obsessed with themselves, there must be red champagne glasses, and the contestants must have no idea who they are walking down that red carpet to meet.

Which is why last night, when every contestant appeared to know they were meeting Ali Oetjen, we were so perplexed.

It all seemed so natural, until Charlie (Sasha Mielczarek‘s doppelganger) came onto the screen.

Then, in just three seconds, we noticed something odd.

HE KNEW HER NAME. Yes. He had addressed a letter to her, with her name clearly spelt out up the top. This was not a last minute addition, it was in the same pen as the rest of the letter.

He also had her initials, A.O, engraved on the front, which implies he knew her name well in advance.

There are several reasons this is severely problematic.

Firstly, the entire premise of the show is that you are meant to be taking a stab in the dark at love with someone the producers seem to think is the perfect woman.

Secondly, and more importantly, this is not a privilege the female contestants of The Bachelor are given. Those poor women are thrown out of the limo onto a red carpet, and forced to endure small talk with an ex-Wallaby who they don't know is an ex-Wallaby.

Thirdly, the little red-carpet gifts are meant to be completely random. They should have nothing to do with the woman, because the contestants could easily do a cheeky google and find out her favourite food (probably spag bol) and arrive with tomato paste.

Were we ever told that the meeting on the red carpet was meant to be completely random?  ¯\_(ツ)_/¯

Not officially. But we were certainly led to believe they were meeting for the first time, without any prior knowledge of each other.

Sophie Monk's season last year operated similarly, where all the contestants knew prior to applying who they'd be trying to win over. So is the reason simply that The Bachelorette and The Bachelor have a different set-up we were never told about?

Ali Oetjen was announced as Bachelorette in May, and it's understood applications were still being taken at the time.

Mamamia has reached out to Network Ten for comment.