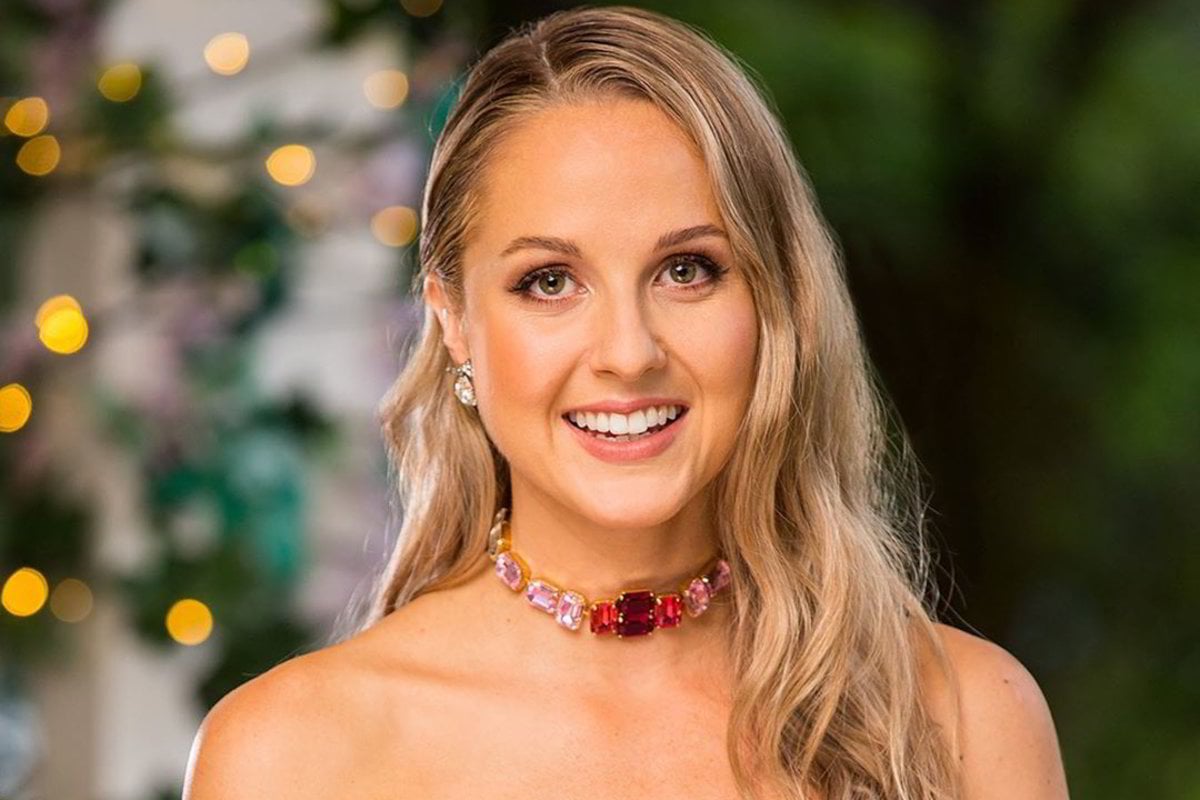 On Wednesday night's penultimate episode of The Bachelor, Locky Gilbert chose Bella Varelis and Irena Srbinovska as his final two.

To the audience watching at home, the final two wasn't a surprise... at all.

But there's no denying that fellow contestant Izzy Sharman-Firth seemed a little blindsided to be sent home before the finale.

"[At the rose ceremony], I was surprised particularly after what had happened at hometowns and some of the things that we had spoken about," Izzy told Mamamia on Thursday morning.

"We talked about what our lives would look like after the show, and even where we would be living and things like that," she explained.

"He told me he was falling in love with me, and that he felt more like himself with me than he had with anyone else before. And so that made me think that he was genuinely considering if I would be the one."

Locky and Izzy's relationship didn't quite kick off until they were in lockdown.

Outside of the occasional group date and cocktail party, Izzy struggled to find time with Locky in the mansion.

"I think for us, lockdown was a time where he got to see really what I’m like. I was just being my most natural self," the 29-year-old shared.

"We wouldn’t talk constantly [in lockdown]. I think we sent messages now and then, and we had video calls probably every week. But it was good to get to know Locky in that time."

During lockdown, Locky and Izzy also shared the infamous bath date over a Zoom call.

But while many viewers found it uncomfortable to watch, Izzy "didn't find it awkward".

"Just sitting in the bath, you honestly forget the cameras are on," the HR consultant shared.

"It could have been a lot more awkward. I’ve seen plenty of other Bachelor bath dates where you’re actually there in person. I was just sitting back in a bath with some chocolate and a prosecco so it was fine," she laughed.

After returning to the mansion, Izzy's relationship with Locky seemed to strengthen quickly.

"If you asked me how I was feeling at the beginning or even before we went into lockdown, I wouldn't have thought that I would be there in the top four," she admitted.

"But things moved really quickly with Locky and I when we got back to the mansion.

"The things that he said to me about how he was feeling had made me feel like there was definitely something there and that it could be me at the end."

While she returned to the mansion, there was also a lot more tension between the contestants, especially following Bella and Irena's unexpected falling out.

"There was a lot that happened during isolation that we didn’t see and I think what we saw on TV was really Bella’s reaction to what had happened," Izzy explained.

"When I got to know Bella and realised that all of the things were coming from Irena, I started to question whether it was true.

"I think it all started because [Irena], who had been [Bella's] best friend, had been saying things to other people that were not nice."

The tension between Bella and Irena led Izzy to confront Irena about the comments she had made.

"There was definitely tension in the mansion because of Bella and Irena’s relationship," she explained.

"Before lockdown, they had shared a room, and it was kind of an awkward situation where Irena was going to have to change rooms and the whole moving situation was a bit weird. But I think everyone got along to keep the peace.

"There was definitely tension though. I had told Irena that I didn’t believe a lot of the things that she said. So we had this situation where we were still nice to each other, but at the same time, I questioned her integrity I suppose."

Now that she's left the mansion, Izzy has started a new relationship.

"It started only a couple of weeks after I got home [from filming]," she shared.

"I had met this person last year when he was in a relationship, so nothing happened. But after I got back from The Bachelor, we had dinner and my good friend invited him over and we just hit it off."

The Queenslander admitted that it has been a little awkward watching the show back with her new partner.

"Things have become more serious between us quite quickly so watching it together has been a bit awkward. It’s not a normal situation to watch your current partner with someone else on TV," she said.

"He's been so supportive though, I don’t think many people would be able to handle it the way he has. And he’s refrained from saying too much because he hasn’t wanted to take away from the experience that I had."