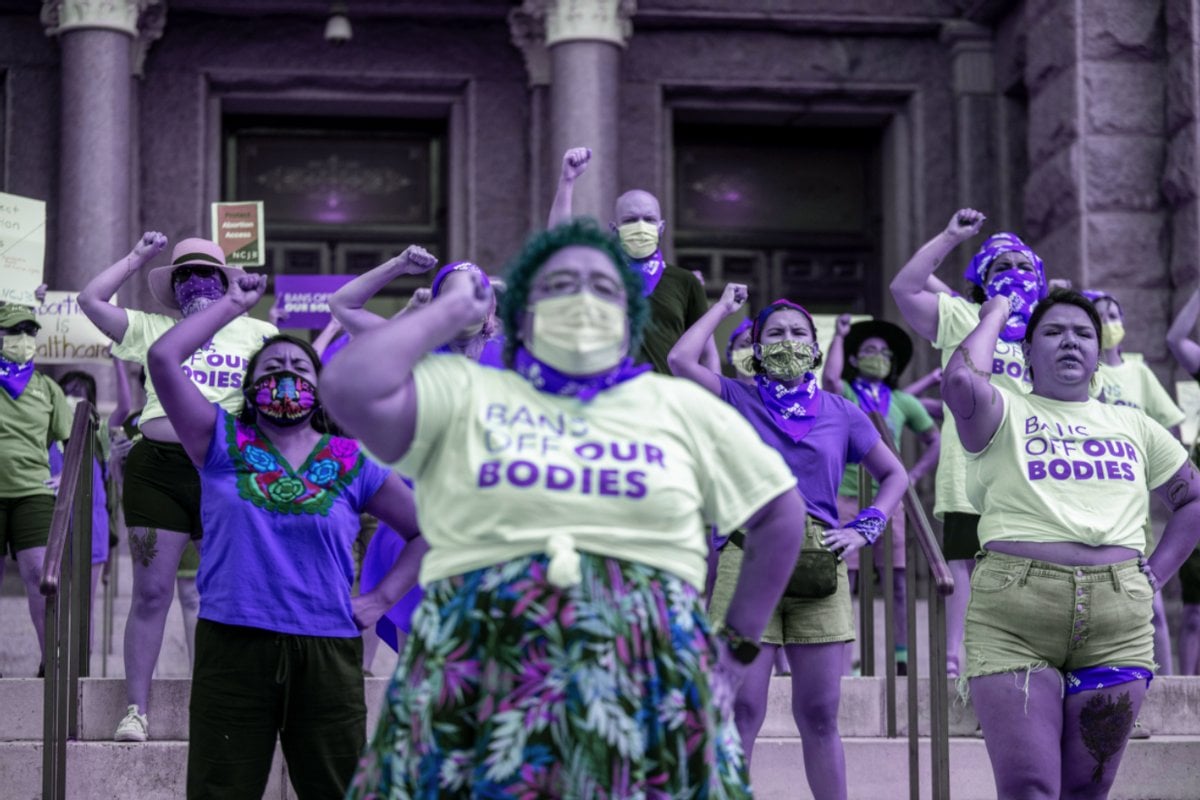 Women in Texas this week lost control of their own bodies.

It's the news the world definitely didn't need to add to its list of terrible things happening right now, and it's one abortion advocates across America worked tirelessly to shut down.

It's also one they sucessfully overturned years ago, just for it to be flipped back to the dark ages on Wednesday, when it came into effect in the state.

The new law bans abortion from six weeks. For reference, most women don't even know they're pregnant at six weeks, meaning that by the time these Texan women discover they are pregnant it will be illegal for them to have an abortion.

Texas lawmakers wrote the law to evade federal court review by allowing private citizens to bring civil lawsuits in state court against anyone involved in an abortion, other than the patient. So that means family members, friends, abortion providers and even Uber drivers can be sued.

The law makes no exception for rape or incest.

Historically, banning abortion has never actually stopped abortions from happening, it just makes abortions unsafe for everyone involved. Women will take measures into their own hands, via back-street procedures.

US President Joe Biden has condemned a Supreme Court decision not to block the new law, and directed federal agencies to do what they can to "insulate women and providers" from the impact.

While a dozen other states have passed similar so-called “heartbeat” bills, they have all been blocked by the courts.

The president said his administration will launch a "whole-of-government effort to respond to this decision" and look at "what steps the federal government can take to ensure that women in Texas have access to safe and legal abortions".

To shine a light on the reality of these decisions, here are the stories of 11 women.

Kendra is a writer, model and Texan woman who shared her own abortion story on Instagram after seeing the news from her home state.

"Experiencing wild pregnancy sickness, alone, and poor, I hopped in a car in October of 2018 to have an abortion in another state because I was too far along to have it performed in Texas," she captioned the post.

"Thankfully, my partner at the time could pay for it because I couldn’t, and in the midst of being terrified that my future would be ripped from me I had to figure out my options in a place where there were none."

While she says she is still yet to process the trauma from being pregnant without money and immediate access to abortion services, she's grateful that she was able to travel to get one.

A reproductive justice advocate, who goes by @gracieminabox online, has been sharing responses to the law change in Texas, to demonstrate the human impact of a policy change like this.

Here are just a few that blew us away;

Tonight I'm thinking about Chelsea, impregnated by an abusive husband she managed to escape from only days ago. Fifteen weeks.

Tonight I'm thinking about Roberta, who asked me how often she'd probably need to change her pad, because she lived in her car and needed to find a public bathroom. Nine weeks.

Tonight I'm thinking about Alexis, who was eleven years old. Seventeen and a half weeks.

Tonight I'm thinking about Millie, who paid extra to come in on an off day so the protesters she usually stood with wouldn't see her coming inside. A little over eleven weeks.

Tonight I'm thinking about David, whose pregnancy torpedoed what progress he had been making with his gender dysphoria. Eleven weeks.

Tonight I'm thinking about Aimee, who'd been trying for fifteen years to have a baby, only to become pregnant with five fetuses at once, putting the health of all of them in peril. Ten weeks.

Tonight I'm thinking about Kate, who was raped in her group home. Eleven weeks.

Tonight I'm thinking about Caroline, who had not yet had her first period before becoming pregnant. Just over eight weeks.

Shared on Shout Your Abortion, this mother explained the logic behind her termination;

"Mom of 2 beautiful children (Age 4 and 6) and I found out I was pregnant with another child. I was sick, dizzy, and miserable for weeks before I opted to get an abortion. I barely got out of bed and fell into depression rather quickly. Not knowing I was pregnant until around 6 weeks. My body didn’t feel right. I didn’t feel right. My other pregnancies were much easier. My husband and I decided we were happy with our family the way it was and did not want another child."

In another deeply personal share on Shout Your Abortion, Morgan tracks her two incredibly different experiences with abortion;

"I have had two contrasting experiences with abortions: the first was legal and provided by Planned Parenthood and the second was illegal in Eastern Europe."

"The first time I became pregnant I was 21 and a recent college graduate. I hadn’t found a job yet, my relationship with my college boyfriend was rocky and I had just experienced my first taste of freedom as an adult. We were not careful with birth control and I became pregnant. The decision to terminate was very difficult and I seriously considered every option, but ultimately the right thing to do for me and my partner was to end the pregnancy," explains Morgan.

"I received a medical abortion at ten weeks from Planned Parenthood and felt very supported and taken care of. Everyone from the receptionists to the ultrasound technician to the doctor made me feel that I was allowed to make this incredibly difficult decision for myself, and I was proud to be among empowered women who are working to provide comprehensive healthcare and reproductive rights to all women. The medical procedure went very smoothly and I was able to deal with the physical and emotional healing as efficiently as possible."

Her second abortion did not go nearly as smoothly.

"In contrast, the second time I became pregnant I was 24 and travelling in Eastern Europe. I had recently moved abroad and was still establishing a network of friends and a support system in my new city. I had learned to be more careful with birth control, but unfortunately this time the condom broke and Plan B also failed. When I found out that I was pregnant at five weeks, an acquaintance took me to her gynecologist who performed the ultrasound and who agreed to help me with an abortion."

Listen to the latest episode of The Quicky right here. Post continues after podcast.

"I am still a little unclear of the details as I did not speak the language well at that time and my acquaintance did not speak English well, but the gynecologist was unable to legally prescribe me the pills for a medical abortion or perform surgery. To the best of my understanding, this was because I was a foreigner and abortions were only available to citizens. However, he offered to get me the pills, and I, perhaps a bit naively because my first abortion had been so straightforward, agreed that this would be the simplest solution."

"He told me his personal phone number, and two days later we met at McDonald’s. I gave him $80, and he gave me the pills he had stolen from the hospital and the instructions to text him if anything went wrong since I should avoid going to the hospital because what I was doing was illegal. Again, I thought that everything would be fine because of my previous experiences, but unfortunately this time I had an extremely adverse reaction to the pills and nearly bled out."

"I had to take an emergency flight back to America where I was able to be seen by my gynecologist. She discovered that in addition to the excessive bleeding, the abortion had been only partially successful and I still had a significant amount of pregnancy tissue that I needed to pass. Eventually, I was able to resolve this and after a month my health was finally good enough to return to my new life abroad.

"These two vastly different experiences demonstrate why access to safe legal abortion is vital for our health. The quality of care that I received from a legal abortion at Planned Parenthood was vastly better than what I received from the illegal abortion where I was unable to seek the medical help that I desperately needed. People who want abortions will get abortions - whether or not they are legal. It is our responsibility to take care of people seeking abortions and ensure that we do not have to jeopardise our health in these already difficult moments."

If you feel compelled to support, you can donate to the Texas branch of Planned Parenthood here.

Reply
Upvote
9 upvotes
There was a tweet I saw yesterday which said something like "Texas won't force a 12 year old to wear a mask in school, but they'll force her to have a  baby". How is this real life?
L
laura__palmer 5 months ago

Reply
Upvote
1 upvotes
@rush It's disgusting. It makes me so mad that this is happening. To be pregnant and not want to go through with it and have no options other than put your body through that trauma, I can't imagine what that must feel like. Abortion is a basic human right, as far as I am concerned.
F
feast 5 months ago

Reply
Upvote
1 upvotes
@rush I saw something similar.  Most of them are all pro-life until they need to wear a small piece of fabric over their face.
M
mamamia-user-876714449 5 months ago

Reply
Upvote
@laura__palmer we had to terminate our very much wanted first pregnancy. I was almost halfway through when we found out our baby had severe health and developmental issues which were "incompatible with life". We really felt there was no other choice. If I had been forced to carry that pregnancy for another four and a half months, it would have been a thousand times more devastating than it already was, and would have done serious damage to my mental health. I think about the woman in Ireland who died when she was denied an abortion after an incomplete miscarriage, and developed sepsis. These laws are going to do so much damage to the women of Texas, no one should be forced to carry an unwanted pregnancy. And don't even get me started on the fact that anyone can now sue someone they believe was involved in providing an abortion - doctors, counsellors, the person who drove them there. They are turning people into vigilantes. And after all that, they won't stop abortions, they will stop safe abortions, and more women will be forced to use the dangerous back alley methods of the so-called "good old days".
News
General
Opinion
True Crime
Politics
Sport
Explainer
Entertainment
Celebrity
Reality TV
Movies
TV
Books
Rogue
Royal
Lifestyle
Beauty
Fashion
Weddings
Home
Wellness
Health
Fitness
Travel
Food
Parents
Before The Bump
Pregnancy
Baby
Kids
Teens
School
Parent Opinion
Work & Money
Money
Finance
Career
Lady Startup
Relationships
Sex
Dating
Separation
Friendship
Family
Real Life
Couples