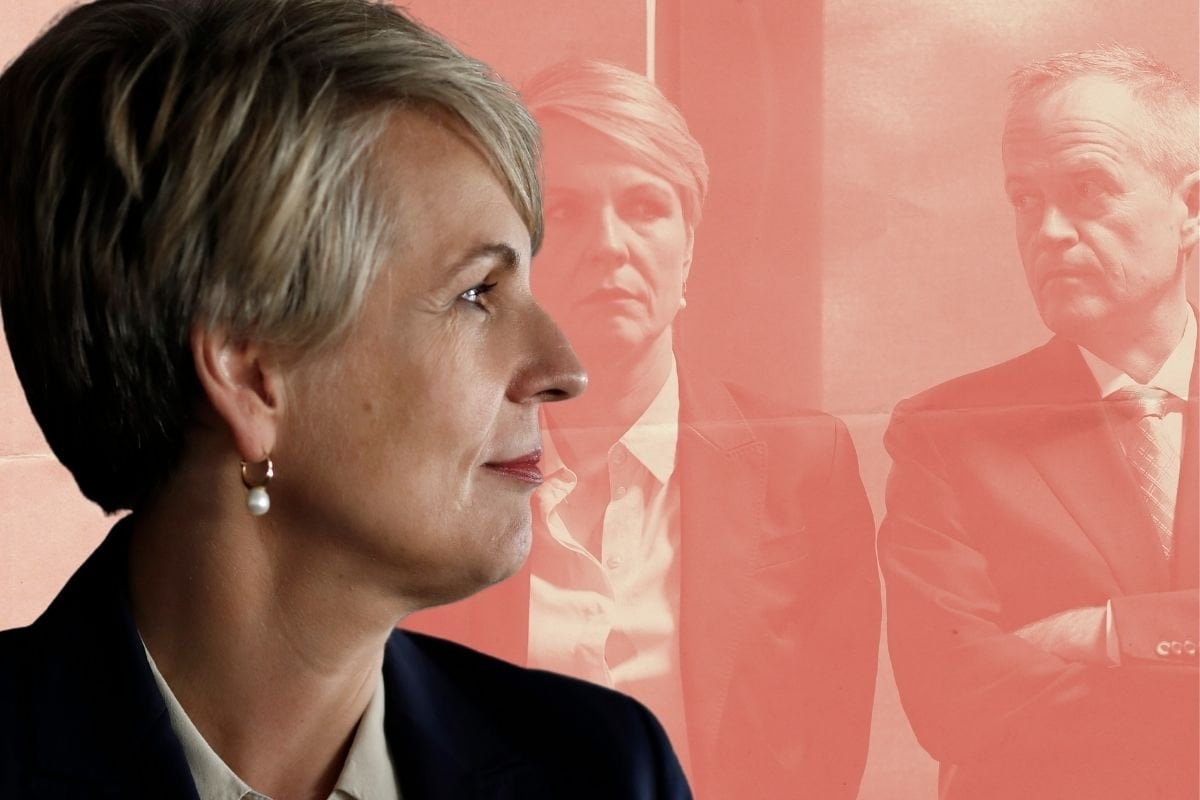 The Monday after Labor's shock loss in the 2019 Federal Election, Tanya Plibersek released a statement to the media announcing that she would not be running for the party's top job.

There were few more qualified for the position.

She'd been deputy to Bill Shorten since 2013, held five cabinet positions under the Rudd and Gillard governments, and was among the most recognisable faces in politics.

Yet there she was, "overwhelmed by the confidence" shown to her by her colleagues and party, grateful for their support, but not ready to wield it in the party room.

The decision not to gun for the position, left vacant by Shorten's resignation, stunned and disappointed many. And it was for a reason we've heard from MPs many times before.

For more of Tanya Plibsek's story, including her parents' remarkable journey to Australia, listen to No Filter.

Speaking to Mamamia's No Filter podcast this week, Plibersek said she simply couldn't "muster the enthusiasm" for the role needed to justify leaving her family even more.

"I was deputy leader the whole time that Bill was the leader, and I had been pretty much on the road six or seven days a week," the 51-year-old said.

"And I thought, 'Well, I know what it's like to be the deputy leader. I know what being opposition leader is like — it's even more time away from home.'"

The Sydney woman's decision was cemented early that Monday morning after the election, when Louis, the youngest of her three children with her public servant husband Michael Coutts-Trotter, came into their bedroom. He was then nine years old then; when she first took the deputy job he was just three.

"He climbed into bed and had a cuddle and was surprised to find me at home at 5am on a Monday morning," she said. "I just thought, 'Wow, what a life for a child to always be missing his mummy.'"

While Plibersek chose not to step forward for the promotion (she was appointed Shadow Minister for Education and Training instead), others have stepped back from politics altogether for family reasons in recent years.

(It's worth noting that Hammond and Di Natale have been the exceptions to the rule. There are many men in the chambers of Parliament House with young children, including Prime Minister Scott Morrison and Treasurer Josh Frydenberg, and stubborn norms regarding gender roles ensure there are rarely public discussions about how they 'balance it all'.)

Of course, the MPs who step back and down do so for myriad, deeply personal reasons. But there are obvious pitfalls to being a parent and MP. Sitting hours often extend beyond childcare hours, sitting weeks often occur during school holidays, and many representatives have significant travel time from their electorate to Canberra.

Representation is only going to help. The more caregiving parents there are in parliament advocating for supportive conditions, the more family-friendly it will become.

There have been some improvements precisely for that reason. There's a parents' room equipped with toys, change tables and cots. And both chambers boast a breastfeeding room off to the side for new mothers.

"I don't want to discourage women from thinking that you can combine work in politics and family life,"  Plibersek said. "You absolutely can; I've been doing it for a couple of decades.'"

She stressed that choosing not to step up at work — of any kind — or in caregiving responsibilities is not about throwing your hands up and saying 'I can't do it', it's about saying, 'Now is not the time to do it.'

And chances are, it won't be a onetime choice, particularly if you have a partner contending with their own.

So, should Plibersek be faced with it soon, will she be the one stepping up?

"Well, I'm hoping that [current Opposition Leader] Anthony Albanese will be our next prime minister," Plibersek said, ever the politician, "whenever that election is."

Seems it's not her time. Yet.

Reply
Upvote
A huge barrier to women and men having access to family life in federal politics must surely be the ridiculous amounts of travel. Perhaps a family home in Canberra (with better sitting days / schedule for large blocks of the year in one location - more days in parliament to pass legislation) would suit more than a family stuck in a far flung electorate based address?
L
littleblackdress 10 months ago