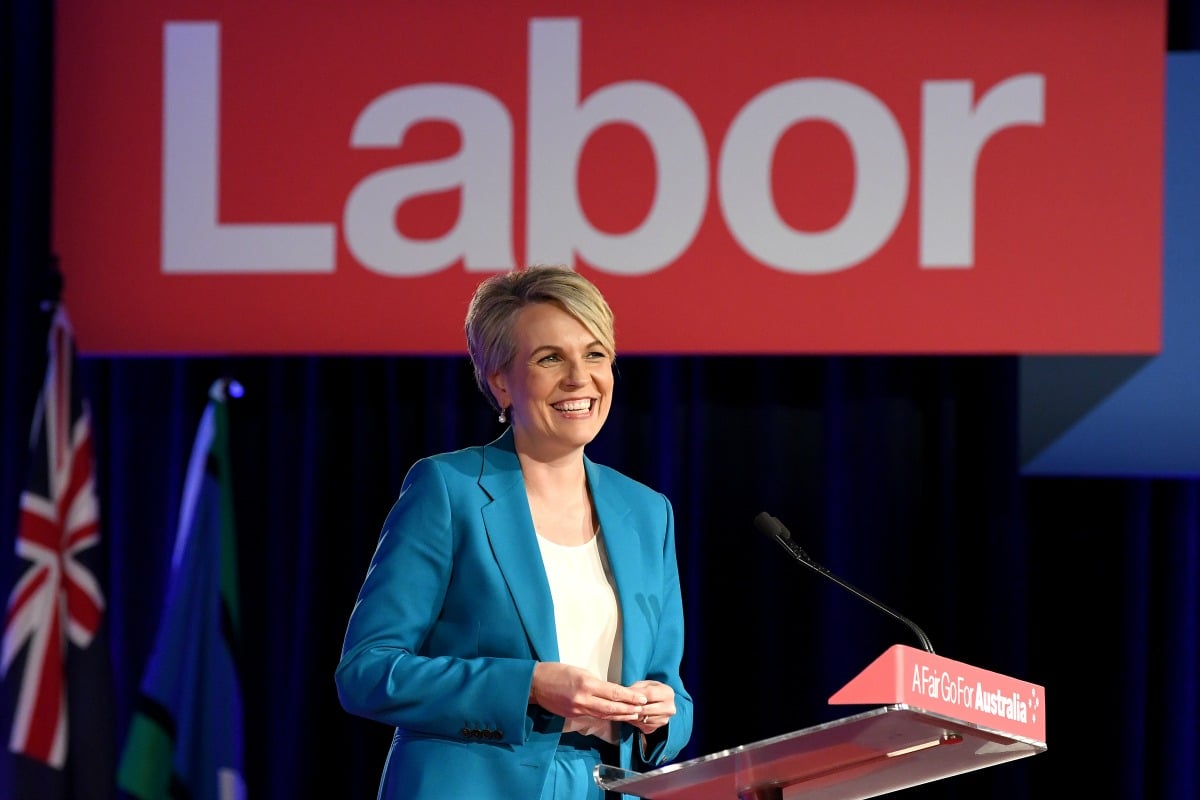 Tanya Plibersek has announced she will not run for the Labor leadership.

In a statement released on Monday afternoon, the current Labor deputy leader said she is grateful for the support she has received from her colleagues.

“I am overwhelmed by the confidence my colleagues, the union movement, and Labor party members have placed in me,” she said.

With Bill Shorten officially stepping down as Labor’s leader following Saturday’s election, the Labor Party now faces the task of choosing a new leader to take on the reinstated Coalition government.

Senior frontbencher Anthony Albanese announced on Sunday he will run for the Labor leadership, with shadow treasurer Chris Bowen expressing interest too.

Shorten is said to have backed Plibersek – and Julia Gillard has also thrown her support behind the 49-year-old from Sydney, in a rare intervention into party politics from the former prime minister.

Inside an election, what you don’t see. Post continues after podcast.

Plibersek is the daughter of Slovenian migrants (her father worked on the Snowy Mountains Scheme) who joined the Labor Party at 15, completed degrees in communications and politics and worked for Senator Bruce Childs, a leading figure on the Left in the 1980s.

In 1991, Plibersek was studying at the University of Technology Sydney when she met fellow communications student Michael Coutts-Trotter.

Plibersek left their first date having learned two things: 1) She really liked him, and 2) He had served almost three years for drug offences in the 80s.

It’s not your usual first date conversation-starter, but Coutts-Trotter was open with Plibersek from the very beginning. He told her about his past, which included time in maximum security jails like Long Bay. He was paroled in 1988 and three years later – while still on parole, not drinking alcohol and attending narcotics anonymous – Coutts-Trotter was telling his story to the woman he would eventually marry.

“It was an unusual start,” Plibersek told the Daily Mail in April. “He told me on our very first date his whole history and then I actually knew after our first date that I was serious about this fellow.

“I took him home to meet my parents probably two weeks after our first date, so I had to tell my mum and dad that I was dating someone with a pretty complicated history. My parents are really wonderful people so they accepted him on face value. Their only interest was how he was going to treat their daughter and when they saw that he was very decent they were fine with his history.”

Plibersek has represented the seat of Sydney since 1998 – but her selection was marked by a family tragedy.

In early October 1997, her brother Phillip Plibersek was murdered in his apartment in Port Moresby, as he fought to defend his wife from an intruder.

It was just a few weekends before the ALP preselectors chose their candidate for the safe federal electorate seat of Sydney. Despite being overcome with grief, Plibersek won.

In a way, Phillip’s death spurred her on.

“It was Phillip who first said to me that I was smart, and that came with a responsibility to do something useful.”

Plibersek held shadow ministry positions from 2004 and was a minister in the Rudd-Gillard-Rudd governments between 2007 and 2013. Her portfolios included housing, status of women and health.

In opposition, she was elected party deputy leader and shadowed foreign affairs and education.

Throughout her political career, Plibersek and Coutts-Trotter have had three children: Anna, 18, Joe, 14 and Louis, 8.

Day one, 2019. Thankful for our awesome teachers and school staff, thinking of all the parents, carers and students. ???????? #backtoschool #schooldropoff #school #sydney #learning

She’s campaigned during election campaigns while pregnant – twice – and breastfed each of her children for their first year, making good use of the parenting facilities available at Parliament House.

Former Sex Discrimination Commissioner Elizabeth Broderick told the Sydney Morning Herald Plibersek made it look easy – but of course it was not.

“You’d walk into Tanya’s office [in Parliament House] and there’d be a cradle or a playpen. She made no apology or no attempt to hide them away from lobbyists or other visitors,” Labor senator Claire Moore said. “She shows it can be done.”

In 2015, Plibersek was moved to talk about her husband – who is a high-ranking NSW public servant – in parliament during a motion calling for a stay of execution for Bali nine smugglers Andrew Chan and Myuran Sukumaran.

Though she makes no secret of it, Plibersek does not often talk about her personal life. In this case, she felt compelled to do so in order to express how seriously she condemned the death penalty.

“I perhaps have a particular view of remorse and redemption,” Plibersek told the lower house at the time.

“I imagine what would have happened if [Coutts-Trotter] had been caught in Thailand instead of Australia, where the crime was committed… What would the world have missed out on?

She also looked at Chan and Sukumaran’s sentences from the perspective of her brother’s murder, saying that if she was the one making the decision on punishment for his murderer, she “couldn’t have thought of a punishment bad enough”.

And that was precisely why, she said, punishments are made on “the bases of universal, consistently-applied rules” and not feelings.

Labor's national executive committee met on Monday to lay out the framework for the leadership ballot.

The search for the next leader is expected to take about one month.

Rank and file members will first cast their votes, followed by the federal Labor caucus, before the results are averaged out and a winner announced.

Tanya Plibersek absolutely made the right decision. As Shorten and his cronies did to Julia Gillard, they pushed her forward too soon as a way of getting her out of the way for their own ambitions. It hasn't paid off for Shorten. Tanya would have Albo busting to trip her up so she is right to let him have it. She is extremely effective, hard-working and popular so her turn will come.

Labour need to win QLD and a women isn't going to win it. QLD are a law unto themselves and still living in 1980. There's a reason Penny Wong didn't even bother to put her hand up. I love Tania but she is right its not her time. They need to pick a leader than can win seats in QLD.

Penny Wong is a senator and not eligible to lead the party.

Also, as a Queenslander, I'm getting pretty sick of people using us as an excuse as to why Labor lost this election. Online, I've been called a dumb arse, idiot, stupid and racist, purely because I live in Qld and didn't vote for Labor.

Instead of blaming everyone else as to why your party lost, try some introspection. Obviously their policies and/or leader didn't inspire enough people to vote for them. It's not Queenslands fault, it's not Clive Palmer or Pauline Hansons fault, it's just politics.

I have lived in SA and Victoria, QLD is now my home, the most genuine people in the country reside here.
QLD know bullshit when they see it.

You gave us One Nation. A party like that would have puttered out into insignificance in the south eastern states. You created your identity, now wallow in it.

No, we need to band together and out-vote Queensland at the next election!