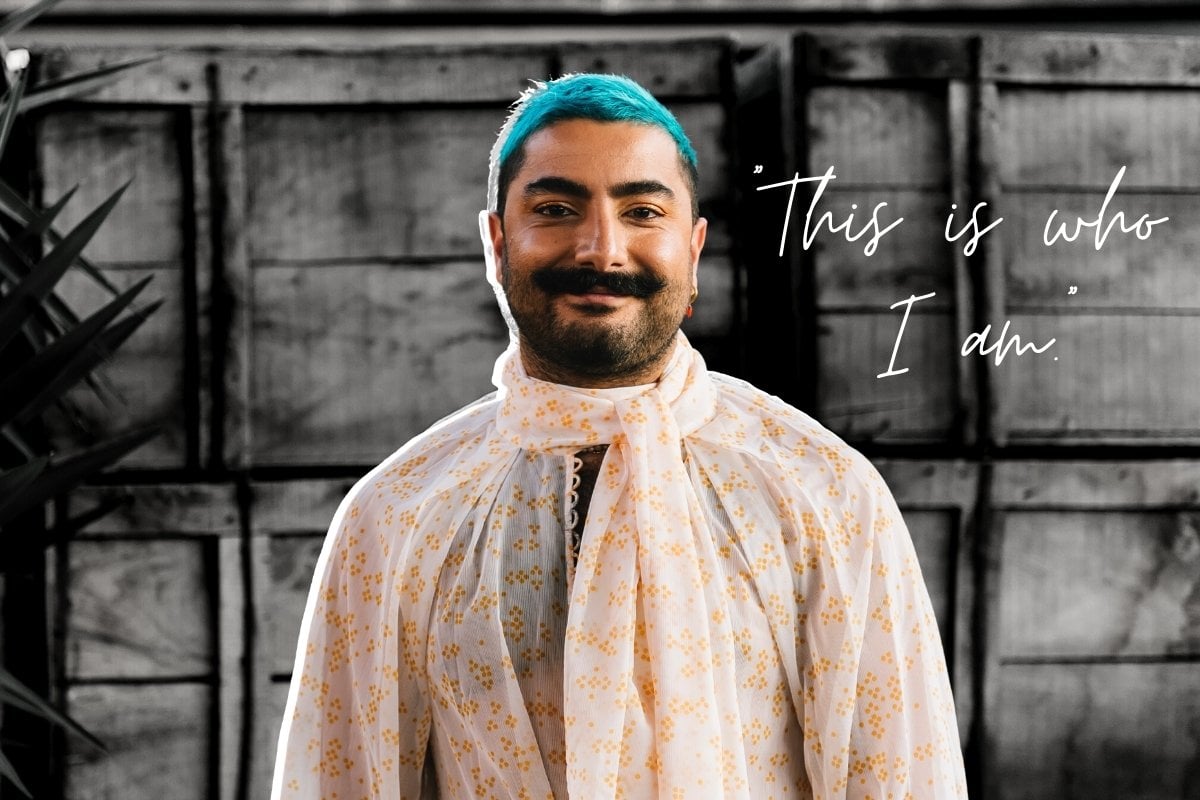 Some of the most pivotal conversations of Deni Todorović's life have happened in the living room of their parents' Geelong home.

They were complicated conversations in which Deni shared what they'd learned about their sexuality and gender identity. They were moments of shame, heartbreak, anger and confusion, and ones of self-determination and, above all, unconditional love.

Speaking to Mamamia's No Filter podcast, the stylist, fashion editor and LGBTQIA+ advocate (who uses they/them pronouns) reflected on three of the most impactful.

The first conversation: 'Do you get picked on at school?'

Deni was 13. They arrived home from a long weekend at their cousins' place. Their mother beckoned them into the living room where their father was waiting to talk.

"Deni, do you get picked on at school?"

They did. Every day. Incessantly.

The usual things, they said. (Kids would call them 'wog boy', because of their name and Serbian heritage.) Like, whatever. People are racist.

In that moment, Deni learned their parents read their diary.

For the next three hours, Deni's mum, dad and brother steadily persuaded them they weren't gay, that it was just a phase, or perhaps confusion because of the taunts of those teasing peers.

"I just believed them, because I'm so close to my parents. And I was like, 'Well, yeah, they're probably right'," Deni told Mamamia.

The second conversation: 'This is a problem.'

From the ages of 10-18, Deni's family were practising Jehovah's Witnesses — a Christian religion known for its door-knocking evangelism.

The word 'gay' was spoken rarely and, when it was, Deni recalls it coming with a negative, spiteful tone.

So when Deni slept with a man at the age of 19, they were flooded with conflicting feelings. They felt thrilled to have discovered their sexuality, but "f***ing petrified" to share that discovery with their family.

"We've always had such an open, honest relationship, and lying to them felt even more sinful than what I was. So I came out to them like four weeks after my 19th birthday," Deni said.

This time it was Deni who gathered the Todorovićs in the living room.

Their father sought to understand ('How do you know?'), and then came to accept.

"She stared me straight dead in the eyes," Deni recounts, "and she said, 'That's okay. This is a problem, and we can fix it'."

Deni recalled insisting otherwise. But, she continued, clutching at every stereotype she'd learned about homosexuality. Deni was going to contract AIDS and die. Deni would never get married, never have children.

"I think there's a really unique relationship that mothers and sons have. My mum is my best friend," Deni said. "So I reconcile those comments by the fact that my mother was just scared. She was scared of 'What would the community say? What would your life look like?'

"I also think that parents premeditate what their kids' lives are going to be like; have all these hopes and dreams that are often your dreams, not your children's dreams. And suddenly, all of that was just colliding and exploding in front of my mother's eyes."

It took three months for her to come to terms with having a gay son. Those months were among the darkest of Deni's life.

"For the first time I had genuinely suicidal thoughts," they said. "Watching your mother cry on a loop for two weeks is no easy thing to look at."

From there, bit by bit, she opened herself up to Deni's identity. They could eventually speak about their boyfriends in front of her, then they could meet them in the driveway, then they could invite them in.

Supporting Deni meant cutting final ties with the church. In the end, "it was a huge amount of support," Deni said.

The third: 'I can't hide this anymore.'

Deni had always loved playing with fashion. And moving to Sydney in their 20s, they found a community of queer people who did the same; men in skirts, androgynous women, and plenty besides.

Working at Cosmopolitan magazine meant access to an enviable wardrobe and colleagues who embraced their fashion sense above any gender norms. Good heels or nice makeup were just that, regardless of who wore them.

It was just creative expression for Deni then (as it remains for so many people). But it later became something more.

Some, like Act, identify as gender fluid and prefer to flow between masculine and feminine identity. But Deni felt most comfortable rejecting those binaries altogether.

They identify as gender non-conforming, which simply means they don't conform to the stereotypes or norms associated with either gender. Instead, they live in a beautiful, liberating space in between.

They also shed their male pronouns in favour of they/them.

It all meant another conversation in the family living room.

Deni cooked their parents dinner, then gathered them on the lounges, and read them a letter.

"I said to them, 'This is how I always felt I've just never had the language to articulate it. I always knew that I wasn't a boy. At some point, as a little kid, I thought 'Maybe, do you want to be a girl?' But the older I became, I knew that was not the case, either. This is who I am. I finally have the language to articulate it. But nothing else has to change. I'm still your son. I'm still my brother's brother. My niece can call me her uncle. All of that stuff doesn't have to change. But I'm giving myself the freedom to be who I am. So when I come out of my room, in a pair of heels to go to brunch, I expect you to respect that and understand that. Because I can't hide this anymore. This is not just a performative thing. This is not just something I want to do at Mardi Gras. This is who I am.'"

The reaction was familiar. The hours-long discussion, the embracing father, the fearful mother, the period of darkness, before gradual and, now, unwavering acceptance.

Reflecting on it all after their interview with Mamamia, Deni posted a picture of themself with their mother to Instagram (see Style by Deni).

"When I think back to the moments of fear and fierce protection, to where we are today, I could burst with pride," they wrote. "From her unwavering support and allyship, to being on the other side of the phone whenever I’ve needed relationship advice, to her first gay bar expedience and celebrating Mardi Gras with me this year. To the fear of what my non-binary life would look like, to acceptance and support. To buying me make-up wipes and dresses, to getting our nails done together and making her way towards wrapping her mind and language around pronouns.

"Mama, you are the definition of unconditional love and the perfect example of the sentiment that time heals all, and at the end of that healing is love, light and coordinating outfits. I love you so much, and I am better for having you by my side."