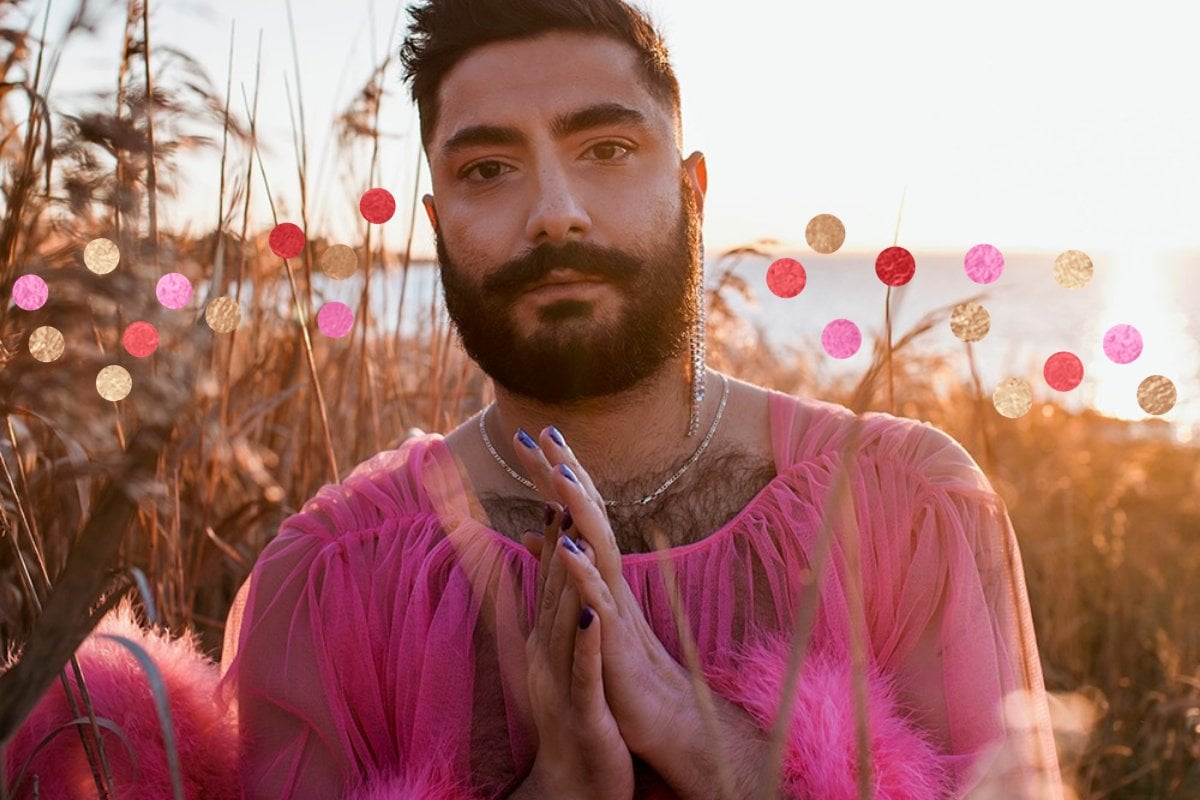 My name is Deni, I’m 32 and I identify as non-binary and gay. When Mamamia asked me to write this article for their audience I jumped at the chance. Raising awareness and shining a light to the non-binary experience is a passion of mine, however doing so for you, my darling reader – is particularly special.

Most of you reading this will identify as cis-gendered women and it is you who have been my greatest allies. You have cheered me along every step of my gay existence and as I begin to enter my second year proudly identifying as non-binary, it is you I want to take along for the ride.

Watch: Dating as a trans woman. Post continues below.

You are raising the next generation of humans and with self-education and awareness comes new levels of empathy, understanding and compassion. An understanding that it is time to defy gender-norms and raise a generation of forward-thinking, inclusive humans. This article will merely skim the surface of what being an ally to my community encompasses, but it’s a great place to start.

So let's dive straight in!

Let’s start with the basics.

What does non-binary even mean?

To understand the non-binary experience, we must first begin with the word binary. A binary system or construct consists of two things, in which everything is either one thing or the other. So in this case, gender has for much of western civilisation consisted of male or female.

Therefore, those who identify outside of this binary structure, identify beyond the gender binary. They are non-binary. Whilst this terminology and language may seem new, there are examples of non-binary humans throughout the course of history. Dating as far back as Native Americans, Ancient Egypt and Rome and historical figures like Joan of Arc, who like me identified as gender-non-conforming.

2. Non-binary is an umbrella term and gender identity is fluid.

Beneath the non-binary umbrella sits a variation of gender identities. Common variations you’ll hear are gender-non-conforming (GNC) which is what I identify most closely with.

You’ll also hear terms like gender fluid (of which Sam Smith and Shane Janek/Courtney Act identify as), gender queer, agender and bigender. Each non-binary individual’s human experience and identity is unique and specific to the way they feel. Be patient and open-minded to listening to what identity means to your non-binary mates.

By now I’m sure you’ve seen and heard the social discourse around pronouns and why they’re so important. The first thing I’d like to tell you is to stop calling them a ‘preferred pronoun’. Saying this implies our identity is a choice we’ve made. It is not. It's our identity. These are simply our pronouns.

4. Why are pronouns so important?

Second to our names, pronouns are the things we use to identify ourselves and others. Misgendering people by using the wrong pronouns is incredibly disrespectful, alienating and often lead to feelings of dysphoria and shame. When someone uses he/him pronouns for me, it makes my skin crawl.

5. Put your pronouns in your bio, in your email signatures and beyond.

Even if you’re cis, especially if you’re cis. Trans-and non-binary people are dying and attempting suicide at a disproportionately high rate in this country alone. Trans Australians are 11 times more likely to attempt suicide than their cis peers. Gender diverse people, six times more likely. By creating a safe environment which respects our identities, your very simple and small act of allyship tells my community that our identity and subsequently our lives matter.

Kamala Harris has hers in her Instagram bio. ‘Nuf said really.

It's patronising and incorrect.

Before you hit me with "it's grammatically incorrect" – I can assure you it's not. We use they/them in the singular more than we realise. Let me explain.

You’re in the queue for your coffee, you get to the counter and notice a wallet that’s been left behind. You turn to your barista and say, “someone’s left their wallet here. If you know who they were you should probably call them”. In one sentence you’ve just used gender-neutral pronouns, in the singular when referring to a person of whose gender you weren’t aware of. This is precisely the way you use said pronouns in the singular for non-binary humans in your life.

7. You're going to slip up, that's okay. Here's how to proceed when you do.

Adjusting our vocabulary to use they/them/theirs in the singular takes some time. I want to preface this by saying that even I, a non-binary human, slip up. It's bound to happen and that’s okay.

However, the best way to go about this is as follows. A quick apology, correction and move right along.

Please don’t make a big song and dance apology about "how you’re still getting used to this and it's so hard". It's fine, I know you are and I know it's hard at first. Making a big deal of it makes us both uncomfortable and is unnecessary.

Keep practicing, practice when I’m not around. In fact, you’ll find you’ll use gender-neutral pronouns for non-binary folk most, when they’re not in the same room as you or speaking directly to them. So just keep practicing and before you now it, it becomes second nature.

8. Don't ask about our body parts.

This one seems kind of obvious but just please don’t. Unless we invite you to and feel safe enough to have that conversation, don’t ask us what’s between our legs or how sex works. This is especially important to the trans community. Understand that there is no right way to ‘transition’ and that not everyone wants to.

I can’t stress that enough. Re-read that sentence and let it marinate. Not all women have vulvas. Not all who have vulvas are women. The same applies to penises.

10. Lead with love, empathy and kindness.

This might seem at first like a lot to take in, but I beg you to stop and consider then just how ‘a lot’ this is for the non-binary/trans person opposite you on the couch.

Remember that no matter how they identify, they are your friend, your family, your colleague, your child, your sibling. A human who wants nothing more to feel love and be safe. Love them, hold them, remind them how wonderful they are.

Your empathy, love and kindness, has the power to save lives.

A
actadiurnamundi a year ago
Reply
Upvote
5 upvotes
This article claims that "Joan of Arc... identified as gender-non-conforming", which has been debunked by historians since it's based on a misconception about the soldiers' clothing she was given to wear and continued wearing in prison because, according to several eyewitnesses, this type of clothing had cords that could be laced through eyelets to attach the different parts together so her guards couldn't pull her clothing off when they tried to rape her on occasion. According to the bailiff, Jehan Massieu, she was finally maneuvered into a false "relapse" when the guards took away her dress and left her nothing to wear except the soldiers' clothing, then she was convicted for that. This has nothing to do with gender identity, and in fact she always called herself "The Maiden" ("la Pucelle") as her chosen moniker, which is definitely feminine and hence proves she identified as a woman.
K
katp a year ago
Reply
Upvote
@actadiurnamundi to be fair, I doubt many Australians have any idea who Joan of Arc was
M
mamamia-user-482898552 a year ago
Reply
Upvote
3 upvotes

You are raising the next generation of humans and with self-education and awareness comes new levels of empathy, understanding and compassion. An understanding that it is time to defy gender-norms and raise a generation of forward-thinking, inclusive humans.