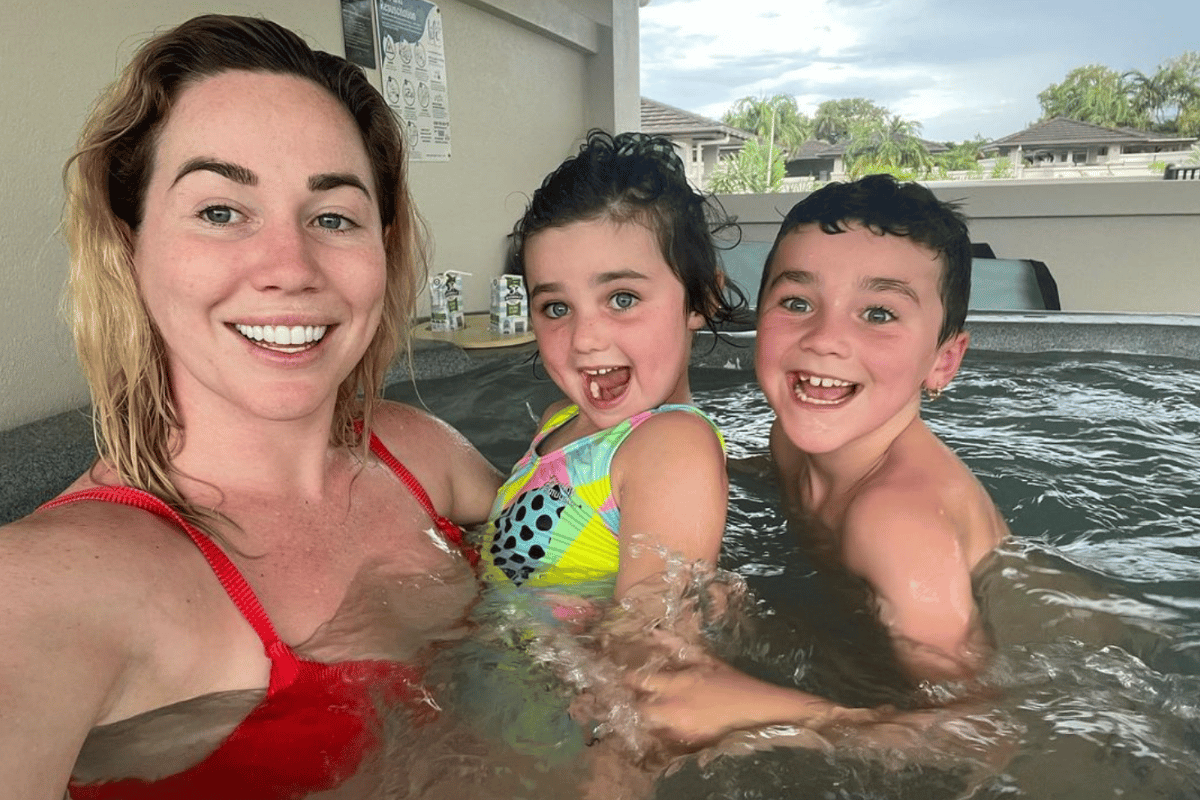 For Sophie Cachia, signing up for Australian Survivor was completely out of her comfort zone.

She had only been camping once in 32 years. She has severe arachnophobia, aka a fear of spiders. And it would mean being away from her kids with no contact, something she had never done before.

But Survivor taught Sophie that sometimes letting go can be the best thing you can do for yourself, your mental health and your family.

She had built herself a successful influencer career and established an engaged audience off her Young Mummy blog. Not to mention, Sophie was also a busy entrepreneur with multiple businesses either in fruition or taking off, plus she's a mum-of-two.

“I was spreading myself too thin, working such long hours that I was quite often missing dinner time, Saturday soccer games or missing school pickup. It was a lot,” she told Mamamia.

Fortunately, the 32-year-old was in a position where she could outsource help for her company and business ventures.

“I’ve learnt the importance of letting go with some of my work and delegating. And in turn, I can actually work harder. I can work on various projects. But also, my most important thing is I can have more time to be a mother to my children,” she shared.

But as Sophie pointed out, delegating tasks to other people can be a privilege, with the odds often stacked against working parents.

With an amazing team around her, Sophie knew it was the right time to make some changes in her life, the first one being to make time for herself.

And Survivor was the first step. Since she was a little girl, she had loved watching the show and has continued ever since.

Listen to No Filter: At 30, Sophie Cachia turned her 'perfect' life upside down. Post continues after audio.

Sophie had been offered the opportunity to go on various reality TV shows over the years, but television wasn’t something that appealed to her.

“Survivor for me was different. The main other drive was the fact it is my son’s favourite TV show. He can even name all the previous contestants and winners from other seasons. So, to see his face light up with excitement when he sees Mummy on his favourite show, it meant everything,” she said.

The timing also felt right for Sophie. Her children, Bobby and Florence, were of an older age. She's divorced from her former partner, AFL player Jaryd Cachia. And for the last few years, Sophie has been exploring her own sexuality.

“I wanted to push myself to see how far I could go. And it was a real personal test for me to see how far I’d come with my mental health. How much more work I had to do as well,” she shared with Mamamia.

Understandably, one of our questions for Sophie included what it was like to be away from her two kids while filming, with no contact.

“It was my greatest fear. I’ve suffered postnatal depression, anxiety, separation anxiety from my children. My husband used to be my security blanket, and I always felt safe and calm with him. And then I spent a few years on my own, where I had to learn to just sort of do it on my own. So, my children then became my security blanket, and they come everywhere with me,” she said.

So, you can imagine the lead up to saying goodbye to Florence and Bobby was challenging.

“I was very open and transparent with them about where Mummy was going and they were safe, and that I would be coming back. But the most beautiful lesson I learnt upon getting there is that I was fine. I quickly realised that I can do this and I can be apart from them. I can put my trust in other people to love and care for them and that it’s okay to take time for yourself,” she said.

“I finally let go of those reins. I can actually do something for me without feeling that guilt.”

And the experience was more than Sophie anticipated.

“I’ve gone on quite a spiritual journey. I'm so far from the person I was. And one of my favourite things about this Survivor experience was getting to live in such a vulnerable state with 12 other humans that I’d never met in my life," she said.

“The reality is you’re not going to be friends with all 24 people. That's real life. But I have made some amazing connections with people that will withstand this show, and that will withstand an Instagram post saying, ‘Hey, I’ve caught up with my Survivor friends’. They are real life friendships that are going to last a very long time.”