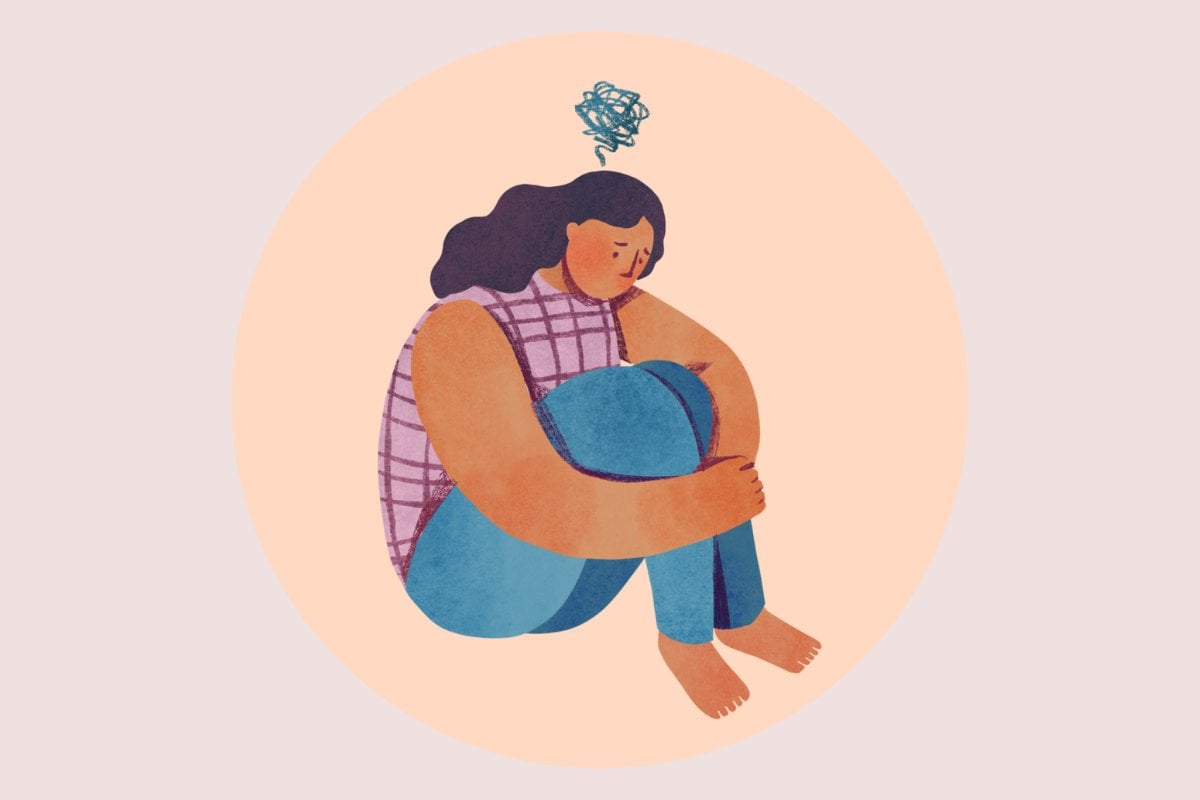 When I was pregnant with my first child, my husband and I went shopping for a nursing chair. An innocuous enough task, or so it seemed, at least until the fabric swatches were presented. I have since come to realise that there are fewer things in life that trigger my 'analysis paralysis' than a binder full of mildly/wildly varying material samples.

I can’t tell you how much time passed in that store, my husband says it was hours, but he was hungry so... all I know is it was longer than any sane person should spend at a super centre on a Saturday. Ever.

In my frozen state of indecision, I remember thinking that not only did this chair need to allow me to perform the primary function of breastfeeding, it should also match the colour scheme of our newborn’s nursery, while also complementing the furniture in our living room for when it was moved there once I finished nursing.

Watch: If my brain could text me. Post continues below.

Never mind that there wasn’t actually any room for a chair this size in the living room of the two-bedroom apartment we were living in at the time because inevitably we would move at some stage and like the baby, this chair was coming with us for the rest of our lives so it was important we got this right. Right?!

My thoughts started jumping from one imagined scenario to the next while the retail staff stared at me with desperate eyes, willing me to make a decision, any decision, so we could all just move on with our lives.

I choked under the pressure and picked something boring and beige because with the pregnancy hormones thrown into the mix my brain had all but imploded by this point and now I was hungry too. So we paid the deposit, we left the store, and we ate.

In the weeks that passed, I obsessively thought about the chair, convincing myself that I had made a bad choice. And if I couldn’t even manage buying a nursing chair, how was I going to manage being a mother?

The arrival of our second child saw the swift departure of the troubled nursing chair that had barely been used. Turns out I preferred feeding our daughter from the couch in the living room where I had less chance of waking my husband and more chance of watching TV.

In any case, there was no room for the five of us in that two-bedroom apartment we were still living in.

As the Salvation Army removalists carried it out, I said a silent goodbye, good luck and good riddance to that chair and all it represented. Namely, my irritating habit of overthinking something seemingly simple matters.

In my defence, I’m not alone.

Okay, but how do you define overthinking?

The Cambridge Dictionary defines overthinking as the action of thinking about something too much, in a way that is not useful. (Check and check nursing chair.) And it’s often put into two categories:

Who's most prone to overthinking?

The same study showed that women are more likely to overthink and be immobilised by it than men, with 57 per cent of women versus 43 per cent of men being overthinkers.

There is also often a correlation between overthinkers and people who suffer from mental health problems such as anxiety and depression.

Tamara Cavenett, President of the Australian Psychological Society and a practising clinical psychologist, says, "People who tend to be a little bit more introverted, a little bit more anxious, quite thoughtful and considered in what they do are often overthinkers, and it's not necessarily a bad characteristic. They're often kinder to other people, more considerate, and more thoughtful, because they do take that additional time to think things through."

The six signs you're an overthinker.

While it’s generally healthy and sensible to think most things through, there are a few tell-tale signs that can indicate you’ve slipped into the paralysing realms of overthinking.

1. You have repetitive thoughts with no resolution.

This might include anything from rehashing past conversations, mistakes, choices or embarrassing moments but the key thing to note here is that all your thinking never actually solves anything.

"It’s when you've had the thought before, you've got no new information and yet you're still spending hours on it just going over and over and over the same thing," Tamara says.

2. You're frozen in indecision.

"Some people get so caught in indecision that they can't actually function and move forward. It's important that you weigh things up, but it's also important at some point you accept that there is a degree of unknown or risk in most things that we do, so you never have perfect information. It's often about making a wrong decision right, rather than thinking that there is a right decision," Tamara says.

"And not making a decision, is often making a decision in and of itself. So staying frozen comes with its own set of consequences and I think people often ignore that as a reality. So delaying is not always better. And honestly, a lot of the time you won’t be getting new information or more information than you have at the time you're struggling with the decision," she adds.

3. You’re constantly worried about things outside your control.

"There are some people I see who are anticipating worst case scenarios that haven't happened yet. They're worried about something that may potentially eventuate and it's not a decision-making point. There's nothing they can do in this particular moment that would alter what their fear is, but they get caught worrying about it anyway and that is one where it can be quite debilitating," Tamara says.

So how do we set up a new habit and stick to it? Listen to one of Mamamia's podcasts, 8 Minutes To Change Your (Work) Life, below. Post continues after podcast.

4. You regularly have trouble sleeping.

"Over-thinkers can find it really hard to pull out of ruminating on a topic and can often either struggle to fall asleep, or because they're so exhausted from the day can fall asleep, but in the early hours of the morning they’ll be awake with their mind racing on a topic," Tamara says.

5. It's stopping you from living a full life.

"When overthinking is actually causing you distress, when it's an excessive number of hours or minutes of the day that you think is relative to the normal... or it’s interfering with anything that you do in your daily life, such as work or your social life, or having fun or just enjoyment in a moment on a frequent basis, I would definitely consider that," she says.

Along with incorporating daily wellbeing strategies such as regular exercise, at least 10 minutes of mindful meditation per day, and a healthy diet, Tamara says it’s important to notice the patterns and focus on preventative skills such as the below.

Now let’s just hope I can think about all this – without overthinking it – next time I go furniture shopping, which I’m sure my husband will agree, is hopefully never.

﻿﻿Emily McGrorey is a writer, digital comms consultant, wife and mother of three based in Newcastle, NSW. You can follow her on Instagram at @emily_mcgrorey.

Reply
Upvote
Outstanding article, thank you so much! I love articles that are resource-rich and full of ideas for "what to do about it". It's one thing to identify a challenge we have - and another to actually overcome it!

Reply
Upvote
Oof, a lot of this is hitting home for me! Especially the repetitive thoughts with no resolution, and the worst-case-scenario thing. And I doesn't help that sometimes the result actually is the worst case scenario, and then you worry about  everything because if it happened once, it could happen again, right? The biggest problem is that the repetitive thoughts seem to hit right when I'm trying to get to sleep, and I just can't get them to stop. Might be time to have a bit of a look at that.
News
General
Opinion
True Crime
Politics
Sport
Explainer
Entertainment
Celebrity
Reality TV
Movies
TV
Books
Rogue
Royal
Lifestyle
Beauty
Fashion
Weddings
Home
Wellness
Health
Fitness
Travel
Food
Parents
Before The Bump
Pregnancy
Baby
Kids
Teens
School
Parent Opinion
Work & Money
Money
Finance
Career
Lady Startup
Relationships
Sex
Dating
Separation
Friendship
Family
Real Life
Couples