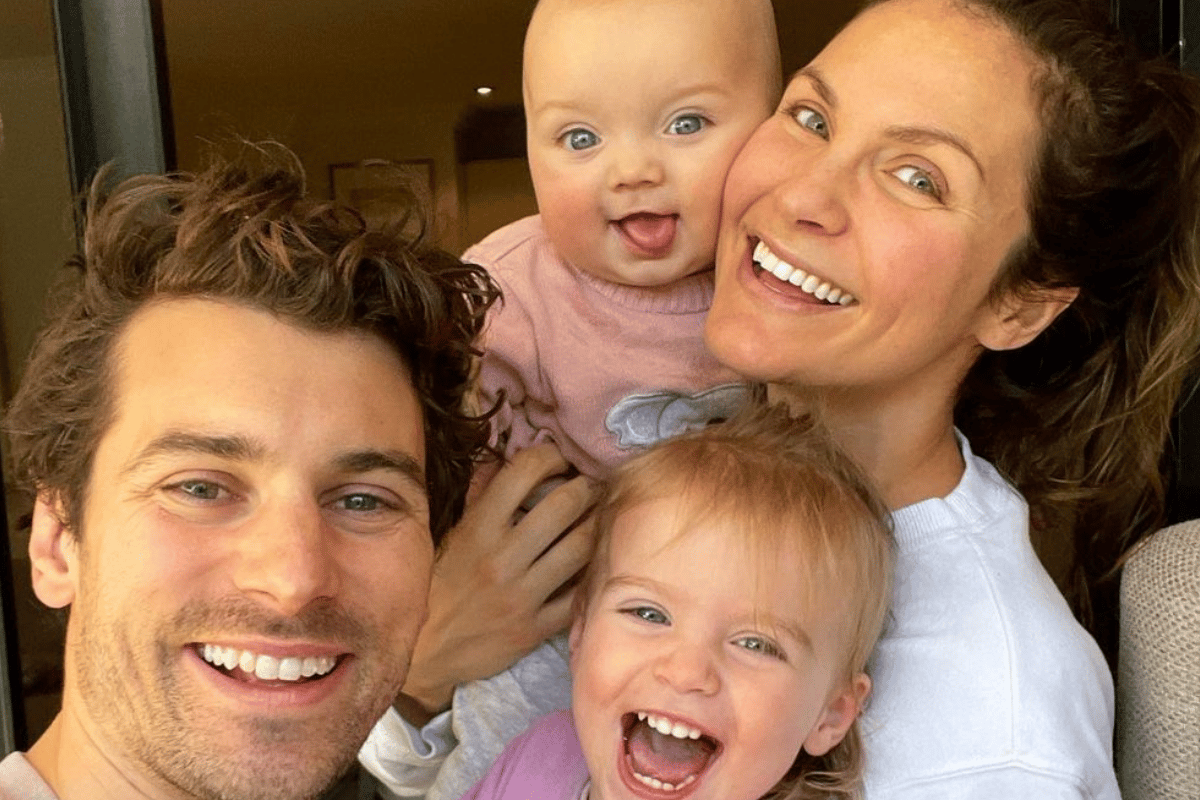 This post discusses pregnancy loss and may be triggering to some readers.

Laura Byrne has a big and busy life.

The award-winning podcaster and creative director of jewellery label Toni May is also a mum to two-year-old Marlie-Mae and 10-month-old Lola with her partner Matty J.

In July 2020, Laura hosted Mamamia's podcast Me After You, all about life after motherhood.

Watch: Laura Byrne describes all the pressures mothers face to be perfect. Post continues below.

She returned to the Mamamia studios this week to chat to Holly Wainwright about going from one baby to two, gender disappointment, and the importance of having good mum friends.

Speaking on the special bonus episode of Me After You, Laura opened up about pregnancy after miscarriage, sharing that she suffered a miscarriage the first time she fell pregnant, before conceiving Marlie-Mae.

"Pregnancy after miscarriage is such a unique experience. I know it is so common, but that doesn't make the grief any less hard to deal with," she shared.

"While everyone is so excited for you, I lived with that constant anxiety while pregnant with Marlie. It is a self-protection mechanism and I just couldn't allow myself to be as happy as I was that first time. Because you know how awful it is when things go wrong."

The couple later experienced a second miscarriage when Marlie was a baby, shortly before falling pregnant with Lola.

"I couldn't feel excited while pregnant with Lola because of the anxiety of having had such a recent pregnancy loss and also because I was in a lot of pain," she shared.

"Doctors initially thought Lola had hydrops syndrome, a life-threatening condition. Thankfully, at seven months pregnant, the test showed she was in the clear but it was a hard nine months.

"I had a great midwife who at one point said, 'Yes, many things can go wrong but many things can also go right'. She told me to have faith, and it gave me some hope to latch on to."

Listen: Laura Byrne talks to Holly Wainwright about life after two kids in this special bonus episode of Me After You. Post continues below.

For Lola's birth, Laura knew her body could do it a second time around, but she also had some birthing-related worries.

"I had conditioned myself to think that birth was scary after Marlie's actually was, but with Lola I had an epidural and it was not scary at all. I had no pain, and my obstetrician was cracking jokes. After six hours in labour, I was still sending work emails on my laptop.

"When it finally came time to focus, it was two pushes, and she was out - it was amazing!"

As Lola's pregnancy and birth had been so different to Marlie's, Laura and Matt were convinced they were having a boy.

"We imagined we would have our girl Marlie, and our newborn boy, and we'd probably stop at two kids. But then they handed Lola to us and said, 'It's a girl!' and we both had an 'oh' moment.

"Gender disappointment is a real thing that isn't talked about enough and while I wasn't disappointed, I was surprised. It was just a very different and unexpected feeling."

Laura shared that her postpartum period with Marlie was painful and emotionally exhausting. But with Lola, she thinks she tried to get back to normal a little too quickly.

"I didn't give myself enough time to recover after Lola's birth so if we go back for baby number three, I have learnt my lesson!" she said.

"Something else we had to deal with this time around was having two kids under two. Marlie was awesome with Lola for the first few weeks, but around the five or six-week mark, she became really jealous and clingy. I would come out of the bedroom in the morning with Lola and Marlie would say 'no baby!' and it was hard to give her the one-on-one attention she needed."

For Laura, the jump from one to two kids was less like a doubling of the workload and more like a tripling.

"When Marlie was three months old, we took her travelling and I remember thinking, 'Oh, this having kids' thing is easy!' Then Lola came along and smacked the stupidity out of us. Two kids is hard!

"Also, people expect you to know what you are doing with your second and because each baby is so different - you don't! Things I thought I had down with Marlie, I did not know what to do with Lola!

"But as with everything with kids, the phases go as quickly as they come and stuff changes. At the moment we are in a good phase with a new daycare and I'm loving it."

The importance of having good mum friends has been paramount for Laura and her feelings of imposter syndrome.

"For a long time, I felt that the mums who spent time on the prepping and the cooking of the nutritious food, or who paid more attention to detail with motherhood, were better than me.

"I didn't have time for all that as I was also running my businesses and it took me a while to accept that everyone parents differently.

"I think it's important to surround yourself with mums who mother the way you do and I now have my community of mums around me and I just do the best I can."

But with so much going on in the last 12 months, Laura admits that finding time for herself has been pretty difficult.

"I would love to spend an hour or two relaxing at the beach like I used to; just lying on my back with my eyes closed. These days when we go to the beach, it is with the kids and it is chaotic - it takes hours to get them layered up in sunscreen then we finally get there and someone has done a poo!

"But I wouldn't change it. I love my chaotic, 'big' life and beautiful family and while I remember there was a time before I met Matt that I didn't want kids, I can't imagine that now.

"I am not done, we want another baby, but I think maybe in a couple of years from now.

"Having kids is literally the best thing I ever did and I absolutely love being a mum."

L
l_dm a month ago

Reply
Upvote
1 upvotes
Beautiful article.  Pregnancy After Loss is something not talked about enough.
I work for **Pink Elephants Support Network** which supports women and their partners going through Early Pregnancy Loss. Pregnancy After Loss is a BIG area of focus for us.
If anyone has gone through this we have support networks for you so please reach out xx
@pinkelephantssupport