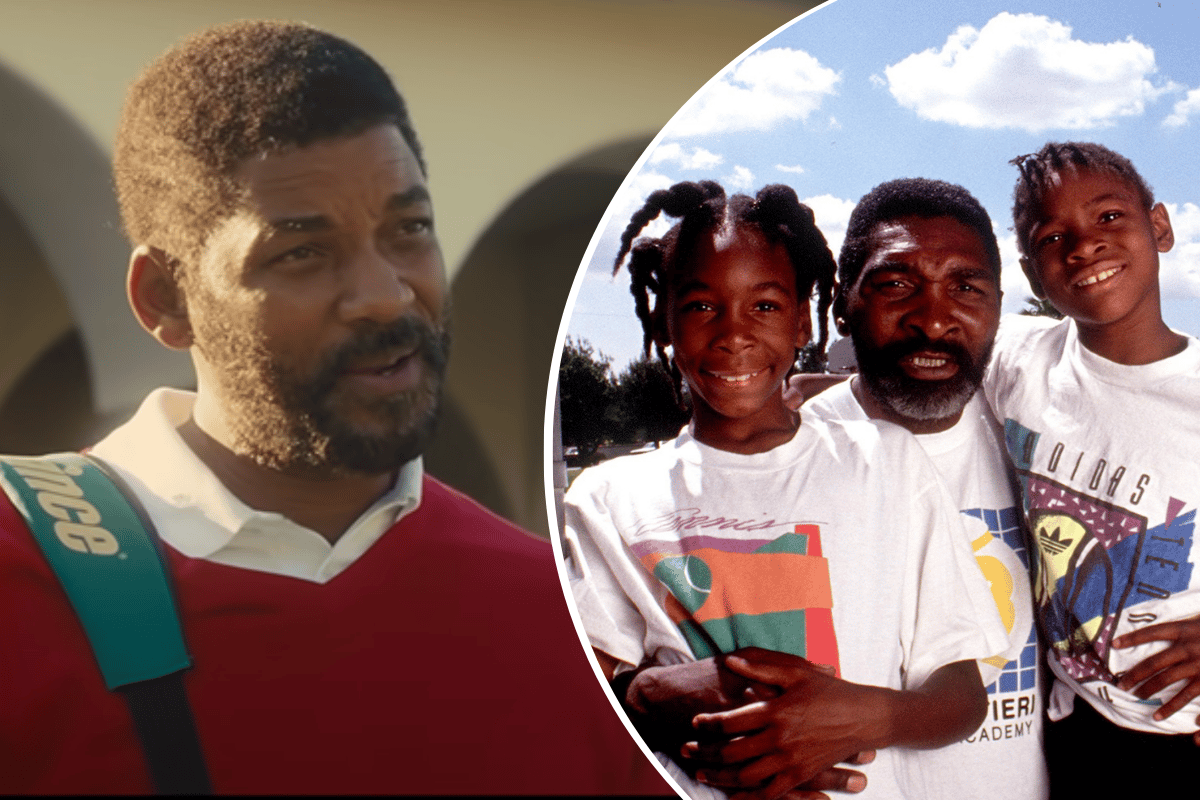 Will Smith has won a Golden Globe, and now an Oscar, for playing the father of tennis superstars Venus and Serena Williams in King Richard.

The movie raises two questions. One: Why are we getting a biopic that focuses on Richard Williams, rather than the true champions, Venus and Serena? Two: Did Richard really go that far to make his daughters into Grand Slam winners? The answer to the second question is yes. In fact, Richard went further than the movie shows.

Most people would know the famous story of Richard watching TV in 1978, seeing Virginia Ruzici win the French Open and earn more than $20,000 prize money, then turning to his wife Oracene and suggesting they have more kids and make them tennis players.

Watch the trailer for King Richard below. Post continues after video.

Oracene already had three children from her first marriage (Richard had five from his first marriage, although he didn’t have any contact with them) and she didn’t want more. But Richard was determined.

"So I used to take her out on dates, and I'd hide her birth-control pills," he told Today. "That’s how Venus came."

Wanting a second baby, Richard convinced a friend to steal Oracene’s purse when she had her pills inside.

"And I'd calm her down, and that's how Serena came."

In 1980, when Venus was born, Richard and Oracene were living in a nice home just a block from the ocean in beautiful Long Beach, California.

Richard, who owned a private security firm, decided to move the family to Compton, a part of Los Angeles notorious for its crime and gangs, because he felt it would give his daughters "a fighter’s mentality".

Oracene was against the move, worried for her children’s safety, but Richard said he was going to move without her. Eventually, she followed. Venus was not quite three and Serena not quite two.

Richard wanted the two girls to become "rough and tough and strong", but even he started to wonder if he’d made a mistake by moving to Compton, where the family were "trapped in the middle of daily gun battles and shootouts".

"A little black girl was shot in the back of the head by a store owner who killed her for stealing a bottle of orange juice," he wrote in his book. "It took me only a couple of months to realise I was in the middle of hell and only God could help me now."

But he stayed. Richard had come up with a detailed plan to make the girls into world champions, and he stuck to it. When Venus was three and Serena two, he put them to work, delivering telephone books for money.

"Neighbours thought I was working the girls too hard," he remembered.

By the time Venus was five, Richard – who only learnt how to play tennis so he could teach his daughters – had started her tennis training. He found some abandoned courts, covered in broken glass, "human waste", needles and condoms, and decided to train her there.

But gang members didn’t want to let Richard have the courts, and he ended up getting into fights, including one where six or seven gang members beat him up.

"To this day, the details are hazy, but I do remember when I woke up that 10 of my teeth were missing from being kicked in the mouth," he wrote. "Over the years I have grown accustomed to not having teeth, and to this day wear my toothlessness as a badge of courage."

He ended up getting the courts, and the gang ended up supporting Venus and Serena. Former Compton councilwoman Patricia Moore told CNN that the gang members were "wonderful" in the way they watched over the sisters, making sure no one messed with them.

To toughen up his daughters, Richard would hire schoolchildren to surround the courts and call them "every curse word in the English language, including n*****". It was so intense that the gang members objected.

He felt the training later came in handy for his daughters, with Serena winning the final of the Indian Wells event in 2001, despite being booed by the crowd.

"The whole crowd turned against her and all she had to do was remember the training that she had been through."

Listen to Mia Freedman's interview with Serena Williams on the No Filter podcast. Post continues below.

Richard had some other unorthodox techniques. Rick Macci, who coached Venus and Serena when they were young, remembers one way Richard used to stop his daughters from stepping back too far when they were playing.

"There were a few times Richard put broken glass on the court," he told The Sun. "The glass was behind the baseline, back by the fence, so they wouldn’t back up and take the ball early."

According to a profile in The New Yorker, Richard didn’t let the two girls have boyfriends, "and, to discourage any impulse toward early motherhood, Richard would rip the heads off of any dolls Venus brought home".

Richard’s plan to make Venus and Serena into tennis champions was a spectacular success, with the sisters going on to win 30 Grand Slam singles titles between them. But his decision to move the family to Compton in the early 1980s had a tragic consequence.

Oracene’s oldest daughter, Yetunde, stayed in Compton, working as a nurse and looking after her three children. While chatting with her boyfriend in her car one night in 2003, she was shot dead by a gang member defending a drug house with an AK-47. It was just across the road from the courts where her half-sisters had learned to play tennis.

Serena said she cried when she saw the character of Yetunde on screen in King Richard.

"I think I cried the whole time," she told Red Table Talk. "Whenever she came on film, I just... personally, I just started, like... I mean, even still."

The experience, she said in a later interview with The AU Review, was "surreal".

"No word describes it better than surreal. To see these incredible actresses and everyone behind it tell our dad’s journey… it’s like 'Oh wow, are we really something?'

"It was super surreal for me, and then to have Will play this role as my father and the way he embodied Richard Williams just took the film to a whole new level. It’s so emotional, it’s well done… it’s just a brilliant piece of work."

For Will Smith, he'd been interested in telling the story of Richard and his family for over 20 years.

"There was an interview that Venus was doing when she was 13 or 14, and it’s a famous interview where Richard snaps at the reporter. I saw that in real time, and the look on Venus’ face was an image that burned in my heart because that’s how I wanted my daughter to look when I showed up," he explained.

"That interview really changed my parenting at that time. That was 20-something years ago, and when the opportunity came up to be a part of this that was the first thing I remember.

"I knew I wanted to be a father protecting a daughter like that to the world."

For this titular role, Will Smith just won an Academy Award for Best Actor during the 49th annual Oscar Awards Show.

He began his acceptance speech, saying: "Richard Williams was a fierce defender of his family.

"I'm being called on in my life to love people and to protect people, and to be a river to my people. I know to do what we do, you gotta' be able to take abuse and you gotta' be able to have people talk crazy about you," he said - pointedly in reference to an altercation he'd had with comedian Chris Rock just moments before.

"In this business, you've gotta have people disrespecting you, and you've got to smile and pretend that's okay.

"I want to be a vessel for love. I want to say thank you to Venus and Serena and the entire Williams family for entrusting me with your story. That's what I want to do, I want to be an ambassador for that kind of love, and care and concern.

"But love will make you do crazy things."

No one really knows what Richard thinks of the movie or Will Smith’s portrayal of him, though. Having gone through a messy break-up from his third wife, Lakeisha Graham, he’s also suffered a series of strokes that have left him suffering dementia and barely able to speak.

But for Serena, it’s obvious why the movie focuses on her dad, instead of her and her sister.

"There would be no Venus and Serena if it wasn't for Richard."

Reply
Upvote
2 upvotes
This just sounds like child abuse and tricking a woman into getting pregnant by hiding her contraception is terrible.
T
talezassian 4 months ago

Reply
Upvote
I feel more compassion now for Serena: she's the best female tennis player ever, but a part of that was an arrogance that made her an ungracious loser. I can see how this may be a coping technique with what her father did to her. I think it's a tragedy what he did to those girls: where is the care for either their happiness or the sort of people they will be? I think that's more important than how well they can play tennis.
P
pippa 4 months ago