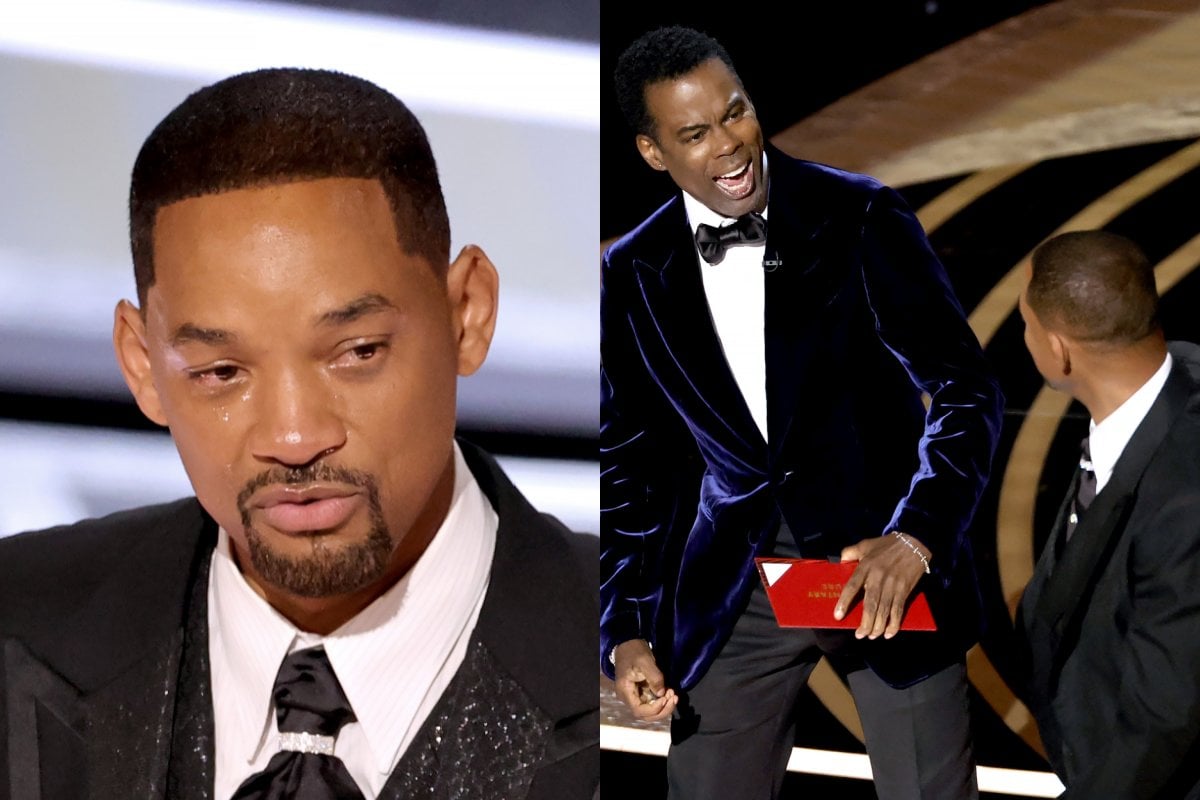 We were halfway through the 2022 Oscars when Chris Rock came on stage to present the Oscar for Best Documentary.

He made a few gags and then said to Jada Pinkett Smith, who was sitting in the front row with her husband Will Smith, "Jada, I love you. GI Jane 2, can't wait to see you."

It's important to note here that Pinkett Smith's head is currently shaved because she has been diagnosed with alopecia, an auto-immune disease which leads to significant hair loss.

Will Smith then walked up onto the stage, appeared to strike Rock, and then sat back down.

He then yelled out to Rock "Keep my wife's name out of your f**king mouth". Twice.

Chris Rock made a joke about Jada Pinkett-Smith being in "G.I. Jane" because of her bald head. She's spoken openly about having a hair loss condition. Will Smith ran on stage, slapped Rock, then screamed twice at the top of his lungs "KEEP MY WIFE'S NAME OUT OF YOUR F-NG MOUTH."

Rock then said: “Will Smith just smacked the sh*t out of me. It was a G.I. Jane joke. That was the greatest night in the history of television.”

Below we unpack all your questions about what happened between Will Smith and Chris Rock at the Oscars:

There's some confusion about what happened because in some countries, the broadcast was cut.

However, in other countries, such as Australia and Japan, the full incident was shown.

Australian journalist David Mack captured the uncensored version of the broadcast on Australian TV and shared it with his Twitter followers. The footage clearly shows Smith walking on stage and appearing to strike Rock, before yelling "KEEP MY WIFE'S NAME OUT OF YOUR F**KING MOUTH" twice.

UNCENSORED WILL SMITH FOOTAGE AS SHOWN ON AUSTRALIAN TV pic.twitter.com/NcRfdjWxqe

Rock then said: “Will Smith just smacked the sh*t out of me. It was a G.I. Jane joke. That was the greatest night in the history of television.”

Footage then showed Tyler Perry and Denzel Washington comforting Smith while he wiped tears from his eyes.

Following the moment in which Will Smith seemingly slapped Chris Rock at the #Oscars, Smith is comforted by Tyler Perry and Denzel Washington. He appears to wipe away tears before rejoining his wife pic.twitter.com/TyXPQe1WGY

Only Smith, Rock, God, and a bunch of Oscars producers know for sure but yes, it seems as though the incident was 100 per cent real.

The moment was so shocking to both the in person audience and people watching at home because Rock seemed visibly shaken as he attempted to recover and continue presenting.

And Smith was visibly upset in the audience.

He continued to present, and then shortly after, the stream cut out, probably because the network was attempting to censor the moment but was too late.

How did the crowd react?

Footage shows the crowd, including stars like Nicole Kidman, shocked at the incident.

Nicole Kidman reacting to the Chris Rock and Will Smith incident at the #Oscars . A NEW MEME IS BORN.😭😭😭😭 pic.twitter.com/X19AE19OUv

LUPITA IN THE BEHIND WILL SMITH IS KILLING ME #AcademyAwards pic.twitter.com/BtITt6SC4R

There's been a mixed reaction.

While some have commended Smith for defending his wife, others have called for him to be charged with assault.

And then, of course, there's the memes.

Serious question: Is Will Smith going to be charged with assault? Because that was assault. #Oscars

Someone who works for the Oscars told me that Chris Rock was not interrupted by Will Smith at rehearsals yesterday. It was not supposed to happen. It was real. #Oscars

If @willsmith seriously did that — and he wins the OSCAR — he just stained the greatest moment of his career. You cannot do that S$&@!!Especially as a BLACK MAN, in that position, to ANOTHER BLACK MAN(@chrisrock) on THAT STAGE. If this was not a joke, Will won’t live this down!!!

Everyone watching Will Smith walk back to his seat. #oscars pic.twitter.com/yyqfR4ixF0

All of us just casually watching the #Oscars when Will Smith decided to slap the shit out of Chris Rock. pic.twitter.com/N1VeGs8rS6

Just saw the Will Smith slap. Anyone have a late night show I can borrow just for tomorrow?

Will Smith won and got a standing ovation - I’m in awe the show went on like nothing happened.. will smith punched a comedian for doing his job. He’s a celebrity in the front row of the Oscars where it’s normal to be roasted, bad taste or not

“At your highest moment, be careful. That’s when the devil comes for you.“

Only Denzel Washington could turn a chaotic moment and career low for Will Smith into a beautiful moment. That man is the GOAT. #Oscars pic.twitter.com/rec7H53yhu

Do Will Smith and Chris Rock have beef?

According to *people on the internet* Rock made a joke about Jada Pinkett Smith a few years ago too when he hosted the Oscars.

During his monologue he made a joke about Pinkett Smith boycotting the show because Will was not nominated for his role in Concussion.

A few years back Chris Rock hosted the Oscar’s and cracked a joke about Jada Pinkett Smith boycotting the show because Will was not nominated for ‘Concussion’. He said, “isn’t she a TV actor?…”

In December 2021, Pinkett Smith spoke about her alopecia on Instagram, writing, “Mama’s gonna have to take it down to the scalp so nobody thinks she got brain surgery or something. Me and this alopecia are going to be friends… period!”

Will Smith's acceptance speech and apology.

About 20 minutes after the incident, Smith won the Oscar for Best Actor for his role in King Richard.

He cried throughout his acceptance speech, saying: "Love makes you do crazy things."

At the end of his speech, he joked: "I hope the academy invites me back."

What has Chris Rock said since?

According to a statement released by the LAPD, Rock declined to press charges against Smith.

"LAPD investigative entities are aware of an incident between two individuals during the Academy Awards program. The incident involved one individual slapping another," the statement read.

"The individual involved has declined to file a police report. If the involved party desires a police report at a later date, LAPD will be available to complete an investigative report."

Reply
Upvote
“I got in one little fight and my mum got scared. She said “you’re moving to your Aunty and Uncle in Bel Air”
A
anania 5 months ago

Reply
Upvote
Not excusing Will Smith assaulting Chris Rock but Will is not being fairly portrayed in the media right now (various labels of toxicity).
Smith has been showing signs for a while now of increasing emotional reactivity and instability in-line with complex trauma. Will is a victim of (narcissistic) psychological abuse and this slap can be understood in the context of that. For the quickest clearest insight watch the clip of Smith and Pinkett-Smith on her show in response to August Alsina’s revelation of his affair with Pinkett-Smith. For context, this show is supposed to be about ‘radical honesty’. Also, Alsina (Jayden’s friend) was in a vulnerable position when the affair occurred about 8 years ago.
C
cat 5 months ago