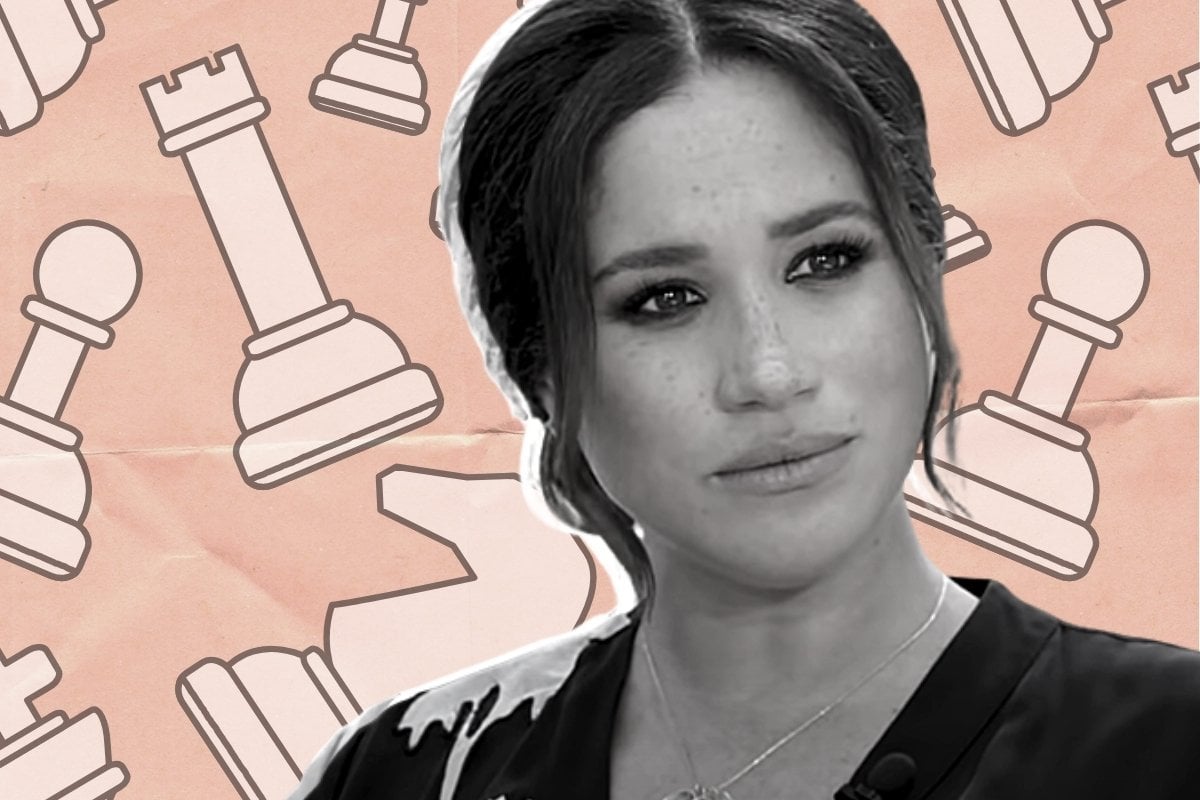 In her interview with Oprah Winfrey, Meghan, Duchess of Sussex, was stunningly candid about her experience of life in the British Royal family. She spoke about the toll of losing her independence, her struggle with suicidal ideation, her relationship with her new relatives, and the fallout from her and Prince Harry's decision to step back as working royals in 2020.

But she was cautious about one thing: naming names.

Yes, she singled out Queen Elizabeth II for her welcoming nature and Catherine, Duchess of Cambridge, for her grace in apologising after a pre-wedding disagreement between them. But when pointing to those responsible for isolating and alienating her, the Duchess referred instead to something called "The Firm".

Watch: Meghan, Duchess of Sussex, on The Firm's reaction to her interview.

It was 'The Firm', she said, that advised her not to go out for lunch with her friends because the tabloids was already "over-saturated" with coverage about her.
It was 'The Firm', Prince Harry said, who showed them a lack of support in the face of racist vitriol hurled at the Duchess in the media.
And — in one of the standout moments of the interview — it was 'The Firm', the Duchess said, that was "playing an active role" in "perpetuating falsehoods" about her and the prince.

So what is this apparently nefarious force? Let's take a look.

What is The Firm?

'The Firm' is a term typically used to refer to the core members of the Royal family. It's credited to Queen Elizabeth II's father, King George VI, who is reported to have remarked that the Royals are "not a family, we're a firm".

After all, they function much like a business. There's a CEO (the monarch), a line of succession, salaries, staff, human resources, public relations management, and so on.

'The Firm' is often used in that context, when referring to the business-like operations of the family, and therefore isn't exactly considered a term of endearment.

"I don't think many people will want me to be queen. Actually, when I say 'many people', I mean the establishment that I'm married into," she said. "Because they've decided I'm a non-starter."

Whenever I see the Meghan Markle criticism still at an all time high, I can’t help but think of this clip from Princess Diana’s 1995 interview pic.twitter.com/Xpj6DSSAa4

Who is part of The Firm?

It usually refers to the House of Windsor, as in those in or close to the line of succession.

British press points to a core group, dubbed The Firm of Eight, that the Queen has reportedly tasked with representing the monarchy and working in its interests.

They are Her Majesty herself; Prince Charles and Camilla, Duchess of Cornwall; Prince William and Catherine, Duchess of Cambridge; Princess Anne; Prince Edward and Sophie, Countess of Wessex.

The Duchess and Prince Harry also referenced 'the institution'. Is that the same thing?

No. They were referring to the royal machine that keeps The Firm operational day-to-day and ensure it survives long term.

"There's the family, and then there's the people that are running the institution," the Duchess told Winfrey. "Those are two separate things and it's important to be able to compartmentalise that. Because the Queen has always been wonderful to me."

Listen: The Mamamia OutLoud team dissect Oprah's interview, from the big headlines to the unanswered questions.

That institution is made up of thousands of staff working behind the scenes.

The Queen's Royal Household alone comprises five departments that handle everything from finances and events to IT and catering. Then the core family members each have their own households and staff, which includes private secretaries and advisors.

It was members of the 'institution' that the Duchess said denied her requests for mental health treatment: "I went to Human Resources... and they said, 'My heart goes out to you because I see how bad it is. But there's nothing we can do to protect you because you're not a paid employee of the institution.'"

It was the institution, she said, that managed the Royals' relationship with the media, and failed to intervene over false stories, including that she made her sister-in-law Catherine, Duchess of Cambridge, cry: "Everyone in the institution knew it wasn't true... They weren't willing to tell the truth to protect me and my husband."

And it was the institution the couple credited as the likely source of (apparently false) rumours they "blindsided" the Queen with their decision to step back as working royals last year.

Together, these two forces make up the business of the monarchy, a business that has now been undercut by what once looked to be two of its biggest assets.

If you are thinking about suicide or experiencing emotional distress, help is available. Please call Lifeline on 13 11 14.