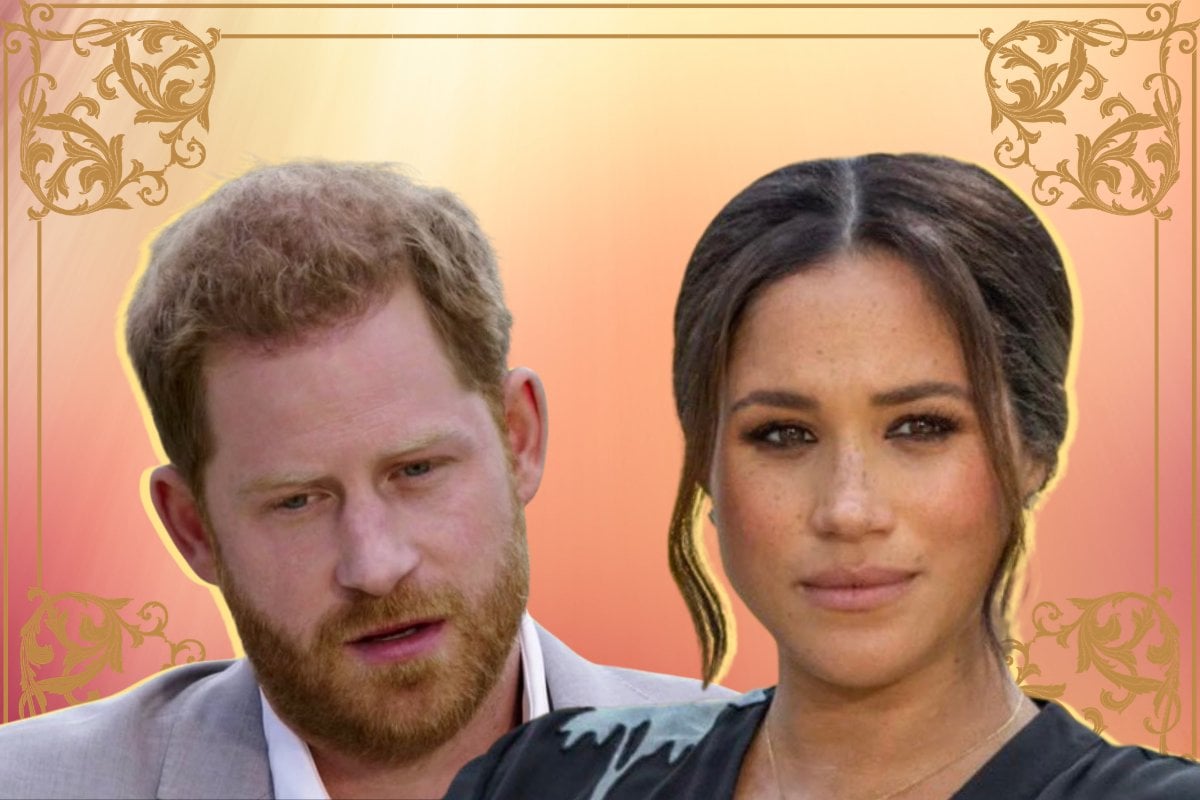 Prince Harry and Meghan Markle's much anticipated tell-all interview with Oprah Winfrey has just aired in the US.

You can watch the full interview on Channel Ten at 7:30pm tonight.

In the meantime, here are the biggest moments from the interview:

Meghan is the first to greet Oprah. She hints she will share the sex of their baby once Prince Harry joins them and then Oprah asks Meghan what she thought when entering the marriage.

Watch the trailer for Oprah's tell-all interview with Meghan and Harry. Post continues below.

"I went into it naively, because I didn't grow up watching the royal family," she replied.

"I didn't do any research. I'd never looked up my husband online, everything I needed to know, he was telling me.

"The perception and the reality were two separate things," she said.

2. Meghan on meeting the Queen for the first time.

Meghan told Oprah that Harry asked her whether she knew how to "curtsy" before she met the Queen privately for the first time.

"That was the first moment that the penny dropped," she told Oprah, explaining she'd assumed that sort of formality only happened in public.

"I met her, and apparently did a very deep curtsy, I don't remember it.

"Thank god I didn't know a lot about the family… I'd be so in my head. I grew up in LA, you see celebrities all the time, this is not the same. It's a completely different ball game."

Read: Meghan and Harry: The hypocrisy of the royal family is unforgiveable.

While most of the world watched Meghan and Harry tie the knot - the couple actually got married in a secret ceremony three days before their televised wedding.

"Three days before our wedding, we got married. No one knows that, the spectacle was for the world," Meghan explained in the interview.

Only Meghan, Harry and the Archbishop attended the wedding and Harry jokingly sang "just the three of us".

Around the time of the wedding, rumours were swirling that Meghan made Kate Middleton cry.

Meghan told Oprah the opposite was actually true.

"The narrative with Kate which didn't happen was really difficult," she said.

"The reverse happened. I don't say that to be disparaging, it was a really hard week. She sent me flowers, she apologised. But six, seven months after our wedding, the reverse (story) happened? I would never have wanted that to come out for her."

Meghan said she didn't want to go into details because Kate had apologised, but she did appear to suggest that it was Kate's camp who leaked the story that Meghan had made her cry.

"I don't think it's fair to go into the details because she apologised and I've forgiven her," she told Oprah.

5. The royal family allegedly feared Archie would be "too dark".

Meghan told Oprah there were "concerns and conversations" in the palace about "how dark" Archie's skin would be.

"What? What? Who is having that conversation with you?" Oprah asked, horrified.

Meghan would not go into detail about who was having those conversations, but said they were relayed to her through Harry.

"I think that would be very damaging to them. That was relayed to me, that was Harry's conversations with family," she said.

Later in the interview, Prince Harry wouldn't share exactly who in the royal family was involved in those conversations.

“I’m not comfortable in sharing that,” he said.

Meghan told Oprah that in the final months of her pregnancy she found out that Archie would not be given any kind of security detail because he wasn't going to be a prince.

She went on to say the decision not to make Archie a prince was actually made by the royal family, not by Meghan and Harry.

"It's not their right to take it away. When I was pregnant, they said they want to change that convention, for Archie," she explained.

Meghan explained she wasn't concerned about Archie missing out on the title, but that he might not be safe.

"The idea of our son not being safe, and the first member of colour in this family not being titled in the same way as other grandchildren…" she said.

Meghan admitted to Oprah she reached a breaking point and was having suicidal thoughts, and the "institution" would not provide her with any kind of help.

"I was ashamed to admit it at the time, and admit it to Harry because of how much loss he's suffered, but I knew I didn't want to be alive anymore. That was a very real, clear, constant thought. He just cradled me. I went to the institution and said I needed help, and I was told it wouldn't be good for the institution," she said.

"I went to human resources and said 'I need help'. In my old job there was a union that would protect me. They said 'My heart goes out to you, but you're not a paid employee of the institution'."

Meghan explained that she repeatedly asked for treatment or to be admitted to a hospital for her mental health, but her requests were denied.

She said she couldn't take herself because when you enter the royal family "my passport, my keys – all that stuff gets turned over".

8. Meghan and Harry shared they're expecting a baby girl.

When Harry joined the interview, the couple shared they're expecting a baby girl.

“To have any child would have been amazing. But to have a boy and then a girl? What more could you ask for?” Harry said.

Prince Harry told Oprah that he and Meghan never wanted to leave the royal family, they just wanted to "take a breath" in somewhere like New Zealand.

The request was repeatedly denied by the "institution".

Harry said he didn't blindside the Queen with the news, instead they had conversations about the move for two years before any decision was made.

"I have too much respect for her," he said.

Harry said he left the because of "lack of support and lack of understanding".

"My biggest concern was history repeating itself," he said. "To receive no help at all and to be told 'This is just how it is, we've all been through it'."

He also shared that his father, Prince Charles. stopped taking his calls when he tried to discuss his concerns with him.

When Oprah asked why Prince Charles stopped taking his calls, Harry said it was because he "took matters into his own hands".

“Because by that point I took matters into my own hands. I’ve got to do something for my own mental health, for my wife’s, and for Archie as well.”

10. Meghan's popularity bred "jealousy" among the other royals.

Harry told Oprah the royal family was very supportive of Meghan at the start but that all changed after they returned to the UK from their Australian tour.

“It really changed after the Australia tour. To see how effortless it was for Meghan to come into the family and be able to connect with people... and that brought back memories,” Harry said, referencing his parent's tour of Australia in 1983.

11. Harry said his father and brother are "trapped".

Harry told Oprah he felt trapped in the royal family and didn't realise the extent to which he was trapped until he married Meghan.

12. "I think she saw it coming." Harry is living on Princess Diana's inheritance.

Harry told Oprah he was cut off financially from the royal family in 2020 and that's why the couple has made deals with Netflix and Spotify.

“You asked what my mother thought of this, and I think she saw it coming.”

Earlier he said that he thinks his mother would be angry if she saw how things have worked out.

“I think she would feel very angry about how it’s turned out, but at the same time, she would want us to be happy,” he said.

13. Prince Harry and Prince William are having "space" at the moment.

Prince Harry told Oprah he is loving his new life outside of the royal family.

“To have outdoor space to go for walks with Archie, or the dogs,” he said. “The highlight for me is sitting him on the back of a bicycle in a little baby seat and taking him on these bike rides.”

Oprah then asked Harry how his relationship with his brother Prince William is going.

"The relationship is 'space', at the moment. Time heals all things, hopefully" he said.

Prince Harry said he was so proud of his wife.

“I’m so proud of my wife. She safely delivered Archie during a period that was so cruel and so mean,” he said.

When Oprah asked the couple whether they had any regrets, Meghan replied that she had one.

“I have one ... my regret is believing them when they said I would be protected," she said.

Oprah asked Meghan whether their story has a happy ending and she replied, “It does. Greater than any fairytale.”

Oprah then asked Harry whether Meghan saved him and he agreed, saying "Yeah, definitely".

But Meghan disagreed and said it was Harry who saved their family.

You can watch Oprah's full interview with Meghan and Harry on Channel Ten at 7:30pm on Monday, March 8.

Reply
Upvote
5 upvotes
I'm not a royal follower at all, but living off an inheritance that allows you to buy a multi million dollar mansion surely can't be that rough, regardless of what you are used to. This seemed a little bit tone deaf to me.
And it is also a bit strange (and surely illegal) to be denied medical or psychiatric treatment. I'm wondering literally how that could have gone down - cutting the phone lines, locking the doors, turning away practitioners from the front doors?
The racism stuff is the absolute worst. Shows how ingrained it must be as it seems not even to be based in looks but what might be lurking under the skin.
D
dudus temere gravis a year ago

Reply
Upvote
5 upvotes
@katp You make some excellent points. There are a lot of unverifiable accusations made in this interview that people are taking as gospel. It’s very scary. I think it’s really important to remember that until recently this couple wanted a hybrid role as part-time working members of the royal family. They wanted in. I think the problem here is that they were told ‘no’. Hence the subsequent torching of the institution and smearing of the royal family.
S
snorks a year ago

Reply
Upvote
6 upvotes
@katp Or, it shows that you shouldn't make up your mind after hearing one side of a story.
G
guest2 a year ago

Reply
Upvote
@katp The comment about Archie's skin colour was made before Meghan and Harry were married.   I guess asking what colour the baby might be given the different racial backgrounds of the parents, construed as racist or mere curiosity,
B
bookaholic a year ago

Reply
Upvote
11 upvotes
Harry & Meaghan’s interview made me cry. I’m still mourning Diana after decades. The abuse she suffered, that Harry suffered, the pain. The unrelenting media. Media that destroyed the most special woman of the last century. Royals are people too. Divorced or not. They are human. The only way forward was to leave. Good on you Harry. Now let them live in peace.
K
kelly a year ago