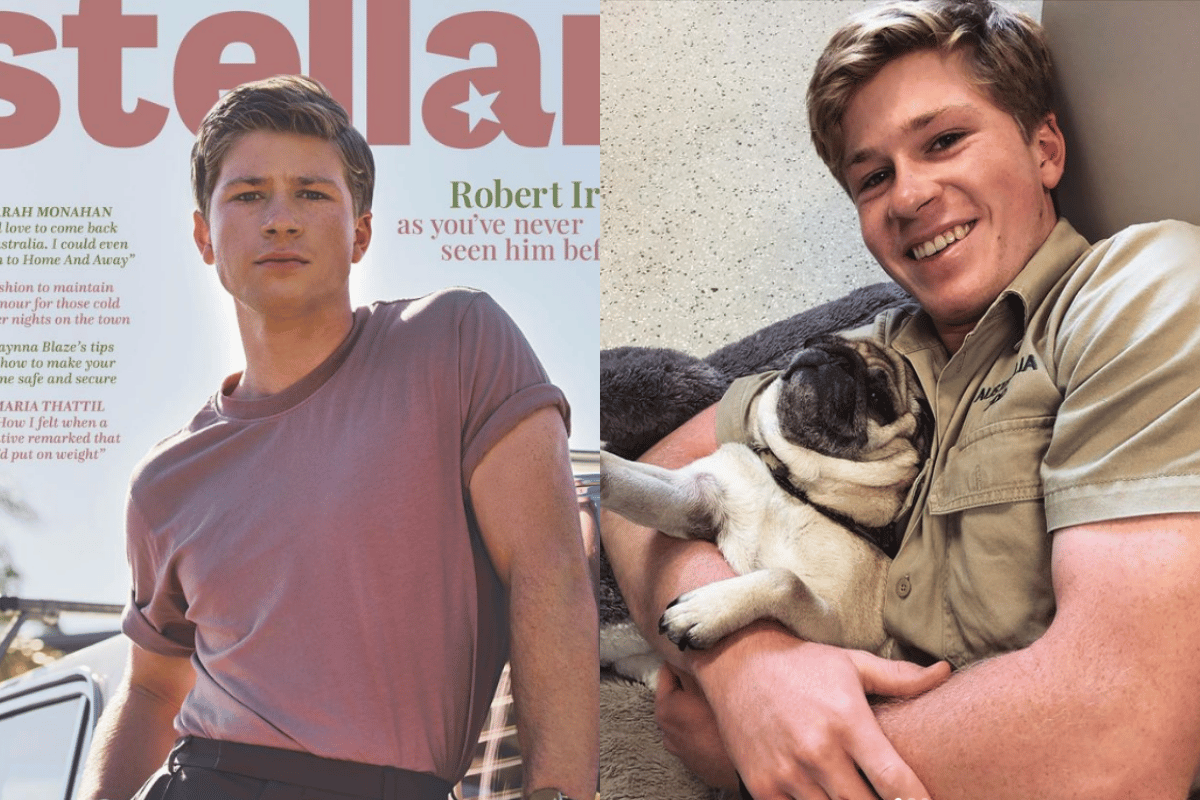 There was collective grief across Australia and the world when Steve Irwin died at the age of 44, a stingray killing him while he was filming a documentary on the Great Barrier Reef, back in 2006.

But for Robert, his sister Bindi and their mum Terri, their grief was personal. Because to them, Steve Irwin wasn't just an iconic Aussie figure and "crikey" chanting wildlife warrior – he was their best friend.

14 years on, Robert is now 18 and ready to carve out his own path, as well as continuing to uphold his dad's legacy with Australia Zoo on the Sunshine Coast.

While entering adulthood is fun and exciting, Robert said this week that it's also a little bittersweet. Because he wishes his dad was here to guide him through it all.

Robert says he still has some memories of his dad. But of course, given his dad's fame and television work, Robert said to Esquire he's thankful to have so many photos and video footage to look back on.

"I remember, actually, every day, every morning, before school, we would want to watch TV and instead of watching cartoons in the morning for breakfast, I'd watch the old documentaries of dad, working with animals. I absolutely loved that so much, and it really made me feel close to him," he said.

"I feel very lucky to have so much captured on camera because whenever a moment starts to fade, whenever I start to forget, I can look back at all this old footage and it completely sparks these memories. That's something I cherish more than anything."

As many have come to see, Robert and Steve appear to be very similar. Terri said to the Courier Mail, that she often picks up on it: the gestures and expression, the fact Robert has won prestigious awards for his wildlife photography, or how he speaks passionately about the environment.

And in a new profile with Stellar Magazine, Robert has proven he is well and truly his own person now, having fun with fashion, photoshoots, chatting about dating, and what the future holds.

"I definitely want to experiment and try new things," he said.

"I want to forge my own path and I'm really passionate about photography. I love being behind the camera. I am working on a coffee-table book with my photography that I'm going to be releasing later this year."

Speaking with Stellar, Robert said it's been the past two years or so that he has felt his dad's absence more than ever.

"Man, I wish he was here! Because I am sort of stepping into adulthood, having turned 18, and navigating that is hard enough [but] when you are in my situation, and you don't have a father figure to guide you through, it's really hard," he said.

Recently, Bindi and her long-term partner Chandler married, and have since welcomed daughter Grace. At the time of the wedding, Terri confirmed to Courier Mail: "Bindi has asked Robert to walk her down. Which I think is so right, I know Steve would feel the same way too."

Reflecting on the "missed milestone", Robert said he was thankful to fulfil that role for his sister, but also said, "that was dad's job. That wasn't mine".

"It's just these bittersweet moments that you get all the time."

Since Bindi, now 23, is happily married herself and with a young child, Robert said he's been feeling a bit of urgency from his sister suggesting he should "hurry up" and find a long-term partner too.

But love isn't something he wants to rush.

"She's like, 'You're 18, Robert, what's going on? Pick up the pace!' By 18, she and Chandler had already been together for a couple of years. So, it happened pretty quick [for Bindi to find love]. But that doesn't happen very often. So, I'm still looking. I am in no rush. It'll happen when it happens.

"If they're not ready to don the khaki and go feed crocs? Mate, it's not happening!"

Given Robert's environmentalism and passion for wildlife, it makes sense that he wants to stay in the documentary space, while also pursuing photography.

"I'm kind of coming into this role where I'm starting to learn more and travel more and do a bit more independently," he said recently.

"I'm looking forward to, as I become an adult, starting to be more involved with the running of Australia Zoo and really become involved in every facet that we do here, not only the wildlife side of it but the business side of it."

And given the impact of the pandemic on Australia Zoo as a business, it's all hands on deck.

"She [Terri] is the most incredible fearless leader who took us through this incredibly difficult time," Robert told The Morning Show.

"The only reason that I think we're still here and all of our conservation work can continue is because of mum... I think she's pretty amazing. She's a superwoman for sure."

Robert also credits his mum for keeping his dad's legacy alive – something Robert said he wishes to continue.

"Everyone's really passionate about making sure that if they have a story about Dad, then they share it with me. I love when people – even people who don't work at the Zoo but who met Dad – come up and say, 'Hey, I met your dad and here's the story'," he said to Stellar.

"Every time I see a new piece of footage or a photo that I hadn't seen before, or someone tells me a story I get a little piece of him. And that means a great deal to me."

K
kelloneill a month ago

After their daughter Lisa Marie was born in 1968, Elvis reportedly stopped being intimate with Priscilla. Priscilla told Barbara Walters that she believed Elvis struggled to reconcile his image of her as a "little girl" with her as a "mother"

He groomed Priscilla when she was only 14 y/o and then couldn't handle the fact that he didn't have a child bride after she gave birth.. I find it mind-boggling that she uttered that sentence using the words "little girl" and is still seemingly in denial that she married a paedophile. It's amazing how talent, charisma and a posthumous legacy can make people ignore the dark side of a person's character.
Resources
Very Peri
Skin
News
General
Opinion
True Crime
Politics
Sport
Explainer
Entertainment
Celebrity
Reality TV
Movies
TV
Books
Rogue
Royal
Lifestyle
Beauty
Fashion
Weddings
Home
Wellness
Health
Fitness
Travel
Food
Family
Before The Bump
Pregnancy
Baby
Kids
Teens
School
Parent Opinion
Work & Money
Money
Finance
Career
Lady Startup