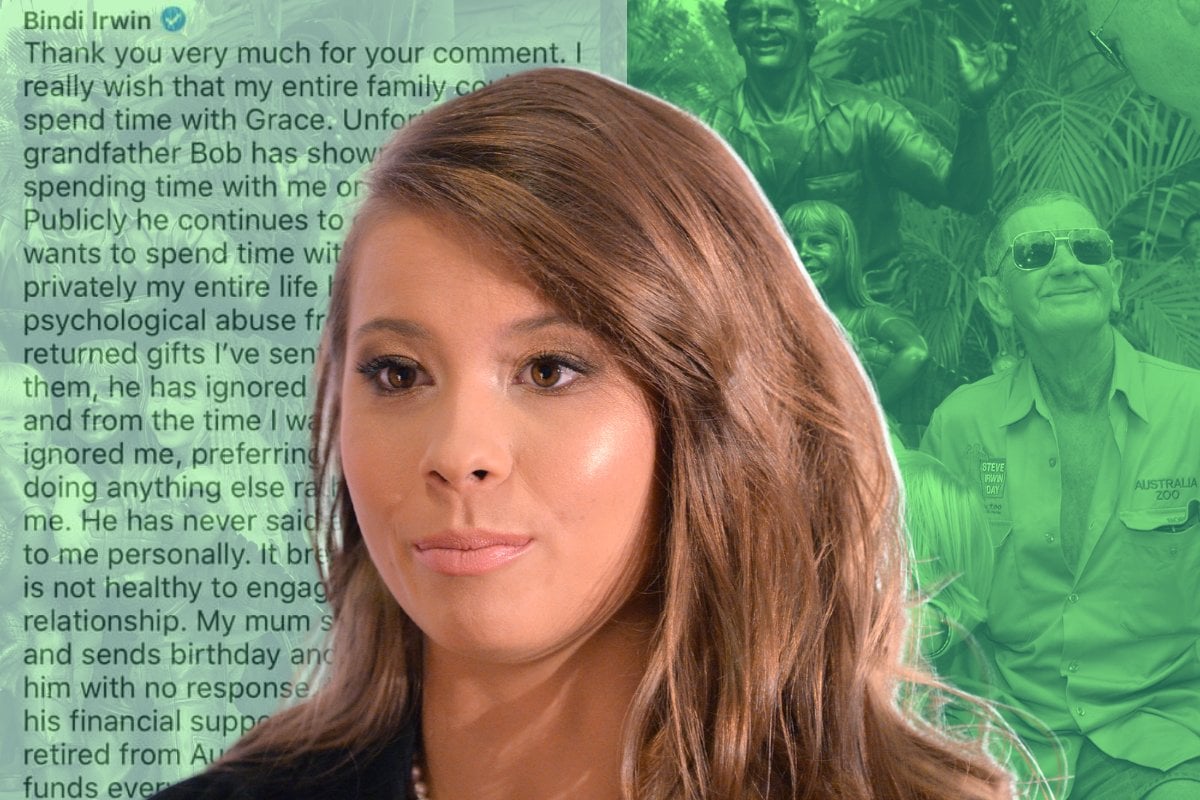 Bindi Irwin is taking a step back from social media and public appearances after 24 hours of furore over comments she made about her estranged grandfather.

She said she was temporarily stepping back "from social media and most of my work in the public eye" to be with her "beautiful daughter" and "wonderful family".

Her husband Chandler Powell publicly supported her decision, saying her "unwavering kindness and your ability to stand up for what is right" inspired him on his own Instagram page.

The family had lived through a day of controversy and speculation after Bindi posted a Father's Day tribute to her own father, her husband and her father-in-law over the weekend.

(Don't worry, you didn't forget: Father's Day was celebrated in the United States on June 20, but it's marked in Australia on the first Sunday in September).

"My dad taught me the importance of strength when standing up for what I believe in and to have empathy for all living beings," Bindi wrote of her late father, Steve Irwin.

"My husband amazes me every day with his kind and steadfast heart," she continued.

"My father-in-law works tirelessly for his family and is always there with a word of encouragement."

A Facebook follower then asked her why she hadn't included her grandfather - her dad's father - Bob Irwin in the post, and Bindi, 22, shared details of a family rift.

"Unfortunately, my grandfather Bob has shown no interest in spending time with me or my family," she wrote.

"Publicly he continues to claim that he wants to spend time with us while privately my entire life has been psychological abuse from him.

"He has returned gifts I've sent him after he opened them, he has ignored my correspondence and from the time I was a little girl he has ignored me, preferring to spend time doing anything else rather than being with me." 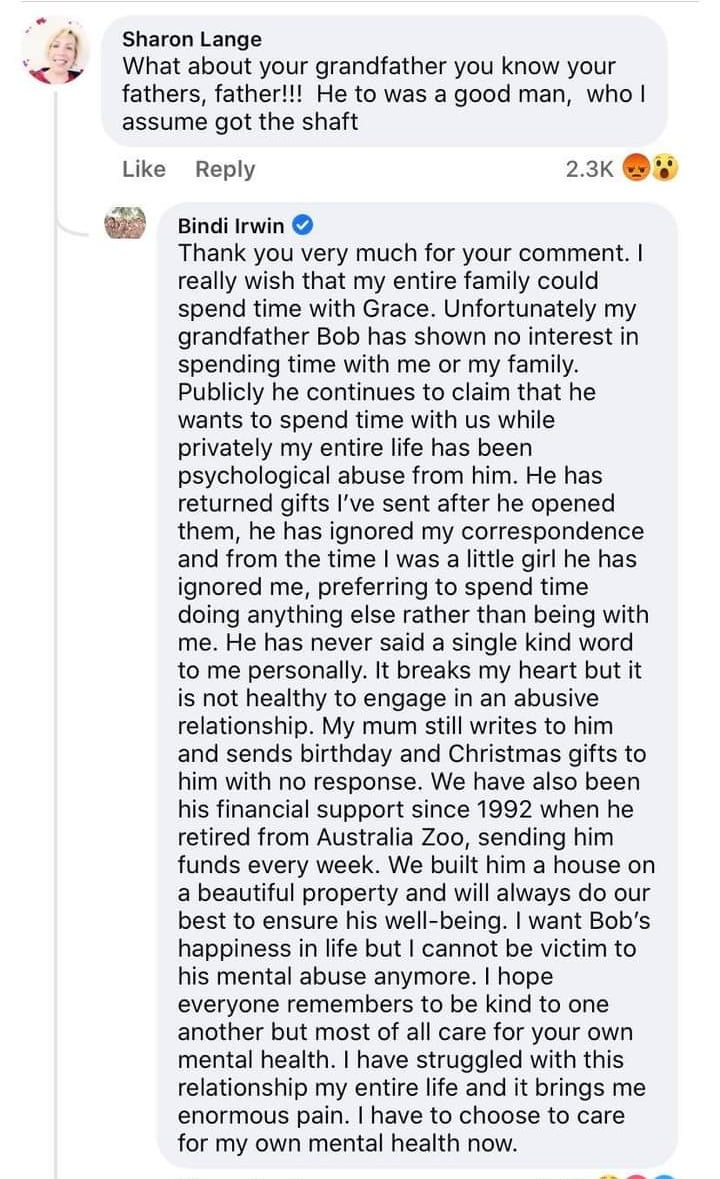 Bindi wrote that her grandfather has "never said a single kind word" to her, and while it broke her heart she had decided not to engage in what she called an "abusive relationship".

According to Bindi, her mother Terri Irwin continues to write letters and send gifts to Bob, 83, but is ignored.

"I have struggled with this relationship my entire life and it brings me enormous pain," Bindi wrote.

"I have to choose to care for my own mental health now."

Despite the strained relationship, Bindi confirmed they aren't completely cut off from Bob and have sent him financial support every week after he retired from Australia Zoo in 1992.

In 2008, two years after Steve's death, Bob distanced himself entirely from the zoo. This was sparked due to differences of opinion in the direction the zoo was going, and how 'commercialised' it had become.

"I just felt that it was better for everybody concerned if I left Australia Zoo and [his wife] Judy and I and all our friends were able to continue Steve's work the way I believe it should be done," Bob explained to ABC's Australian Story at the time.

"The problem I had was that the management and I didn't agree on certain aspects of Australia Zoo after Steve's passing... because most times I went into Australia Zoo, I would have a different sort of opinion with somebody… or I may have an idea and it would not be listened to."

Bindi has rarely spoken about their estranged relationship before.

When speaking to the Australian Academy of Cinema and Television Arts in 2015, Bindi confirmed Bob grew distant from the rest of the family and believed it could be down to his grief.

"Everyone deals with grief differently. When my dad passed away, he chose to distance himself from everything that Dad loved the most," Bindi said.

"At the moment we are really just respecting his wishes because he hasn't had anything to do with us for a long time, and he decided to take his own path. That's important, so good for him.

"There was one year where we sent birthday presents to him and he opened them up and he sent them back." 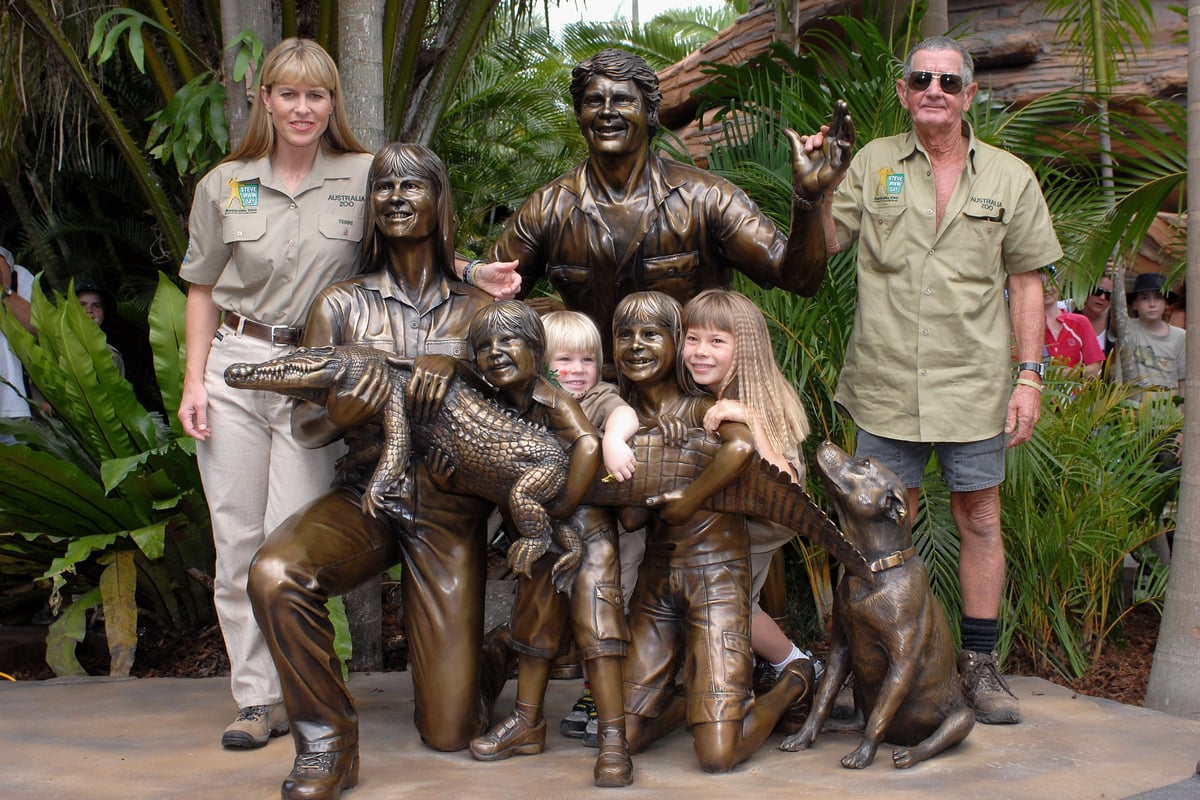 The last public images of Bob Irwin with his grandchildren was in 2007, at the unveiling of a statue of the Irwins. Image: Getty.

The strained relationship once again made headlines in 2019, shortly after Bindi announced her engagement to now-husband Chandler Powell.

He was approached by media at his Queensland property but did not respond to questioning. This was interpreted as him not being happy for his granddaughter and made many headlines.

In September that year, he told the Courier Mail he sent Bindi a letter to clarify that wasn't the case, but he never heard back.

"Much the same as any other parent or grandparent, I would wish them all the best — which I do — and hope things go really, really well," Bob told the Courier Mail.

Entertainment Reporter @mrpford reveals a family member has spoken out against @bindirwin following her shocking comments about her grandfather Bob Irwin pic.twitter.com/bVE002HWa2

Bob has not responded to Bindi's Facebook comment, though Sunrise entertainment reporter Peter Ford said he and wife Judy were unaware of the comments until Ford reached out.

"They were pretty shellshocked by it and when I rang and read to his wife Judy the details, they're not on social media, so they were not aware of what was going on at all, I think they were pretty shocked and devastated," Ford shared on Sunrise.

"That's just the feeling I got. They didn't say that to me and they did not come back and offer any kind of reply or response." 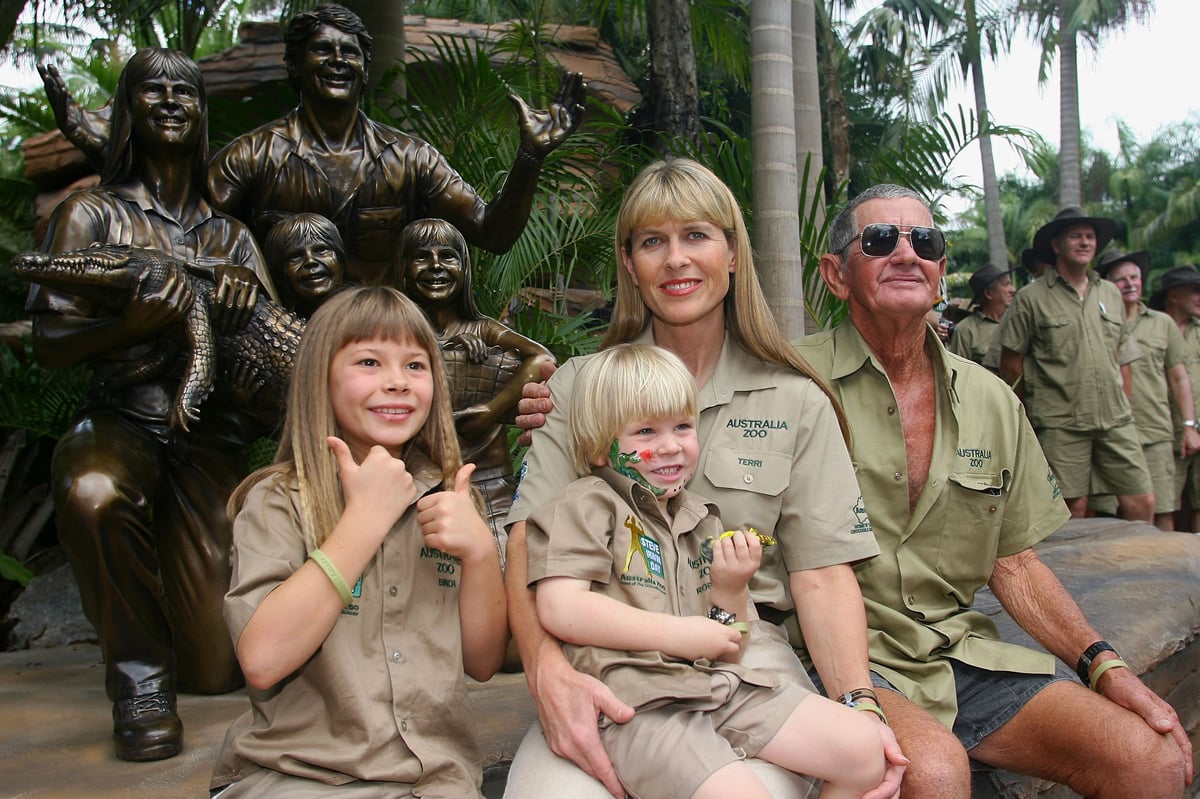 The comments shocked the Irwins' extended family too.

"Poppy is the most genuinely beautiful human on this planet and has NEVER spoken out or put down anybody," she wrote in a public Facebook post.

"He is a man who sits silently and battles his demons alone, in what is great sadness. He doesn’t retaliate, only prays for his grandchildren’s safety and good lives."

She said "these lies need to stop".

"He hasn't seen you since you were 10. He has done all he knows how to do and that is bury his head in the sand because that’s how he copes," French wrote on Facebook, addressing Bindi's comments.

"He loves your Dad, and you guys more than you know," she wrote, as per the Daily Telegraph, adding he was "devastated" by the headlines generated.

"This should be a private matter not written about on Facebook. I'm so disappointed to read this. It's immature to write such words... he can't even visit his own son’s grave or use any private family video or photographic footage of him.

"But he doesn’t speak up, he has continually asked to be left alone and played down this story."

She told 7News on Monday evening those close to Bob had not told him the full extent of Bindi's comments.

"Naturally Bob's quite upset about it, and to be perfectly honest we haven't told him the full extent of the comments because we're quite concerned about how he might take that," she said.

French said that Bob and Bindi hadn't had contact with each other since 2007, the same year the last public photos of the family together were taken.

This article was originally published on June 21, 2021 and has been updated.

P
pippa a year ago

Reply
Upvote
5 upvotes
Well, comments like Bindi’s are a sure way to bring healing and peace. With her level of privilege, I simply refuse to cast her as a victim. If she chooses to spend time thinking about how terribly she’s been wronged, that’s on her. I’m in complete agreement with the family member who said it’s a private matter. Her only reason for posting that comment, was to put on the victim’s cloak of ‘poor me’.
M
mamamia-user-936684540 a year ago