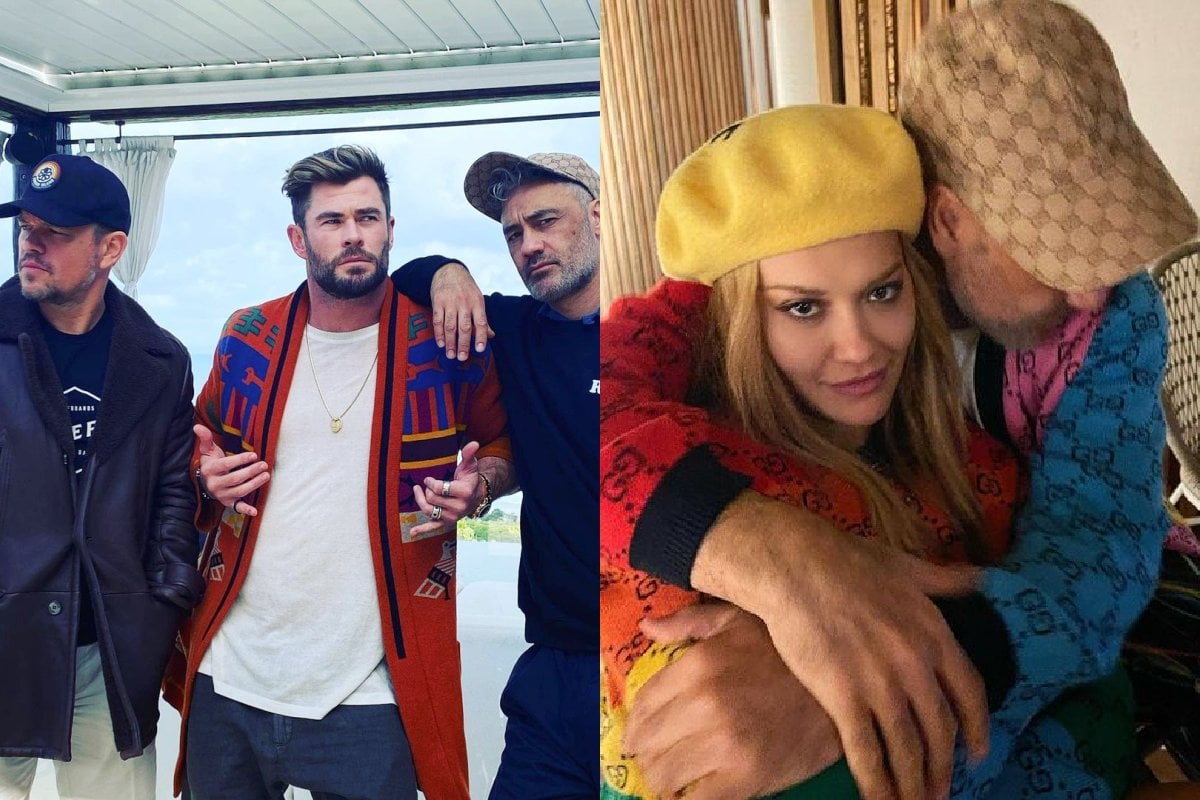 If you haven't already noticed, Sydney has become the new Hollywood.

Chris Hemsworth has convinced plenty of his A-lister pals (including Natalie Portman, Matt Damon, Melissa McCarthy and Christian Bale) to join him in Australia. That's partly because Thor: Love and Thunder is filming here.

Since January 26, the much-anticipated Marvel film has been filming in locations across Sydney. And my goodness, there has been a lot of gossip that's come out of it.

Including cameos and dating rumours, here's all the Thor: Love and Thunder gossip.

News has it that Thor director Taika Waititi has been dating Rita Ora for the past month. Last week, the British singer posted a carousel of photos to Instagram, including a photo of herself and Waititi cuddling.

Now, sources close to the pair have confirmed they've been seeing each other for quite some time.

"They've been a couple since early March but kept things low key. However, all their friends know about the relationship. They're really into each other," a source told The Sun.

The couple has been photographed together on numerous occasions.

In March, Ora and Waititi were pictured together for the first time at a dress-up party hosted by lead Thor actor, Chris Hemsworth.

And just last week, the couple was photographed with Chris Hemsworth, his wife Elsa Pataky and Matt Damon, exiting a private jet in Sydney after a trip to Gold Coast, Queensland.

Russell Crowe just confirmed he'll be in it.

While Thor: Love and Thunder already has a pretty star-studded cast (hello, Chris Hemsworth, Natalie Portman and Christian Bale), it just added another big name to its lineup.

On Monday, Australian actor Russell Crowe confirmed he too, will be in the film.

"I'm going to get on my bicycle and ride up to Disney-Fox studios, and I'm gonna get the hot tongs out, and around 9.15, I shall be Zeus," the 57-year-old said during an interview with JOY Breakfast with The Murphys.

"It's for Thor. It's my last day of Zeus-ing about and I'm going to enjoy it," he added.

Looks like another A-lister could make an appearance too.

Matt Damon and his wife Luciana Barroso have been long-time friends of the Hemsworths. And both of them, plus their three children, have been living in Australia since January.

Now, there have been some rumours suggesting that's because he'll be making a cameo in Thor: Love and Thunder.

If you've seen the previous Thor film, Thor: Ragnarok, you'll know there was a brief scene about the "death of Loki", and Damon played Loki. So there's a slim chance he could return again.

The other celebrity cameos.

There are rumours that some other celebrities will be making an appearance in the film. Because, why not?

Plus, Melissa McCarthy (who's been here filming Nine Perfect Strangers) might just make a cameo because she's in Australia. Fair.

Reply
Upvote
Knockin' boots with Rita Ora? Noice. Prolly time to compulsorily aquire Taika as Australian.
Fire crocs, Melissa? Ha. Snap. Been there, done that.
'Cept in my early 20s, it was pronounced "crotch".
C
cat a year ago

Reply
Upvote
1 upvotes
Okay, a few things...
Chris Hemsworth hasn't convinced anyone to come here, the cast for Thor was announced before we even know coronavirus existed. It has nothing to do with Hemsworth and everything to do with the fact that Disney/Marvel purchased Fox Studios. Hemsworth isn't even the lead, Natalie Portman is.
Secondly, theres zero chance that Marvel are adding random cameos based proximity. Actors come to them.
Thirdly, Taika is married, and although there are rumours they're separated, I doubt he's announcing that he's dating someone else via instagram posts when he has two young daughters and the divorce isn't final. Perhaps he was actually just... getting off a plane?
T
talezassian a year ago