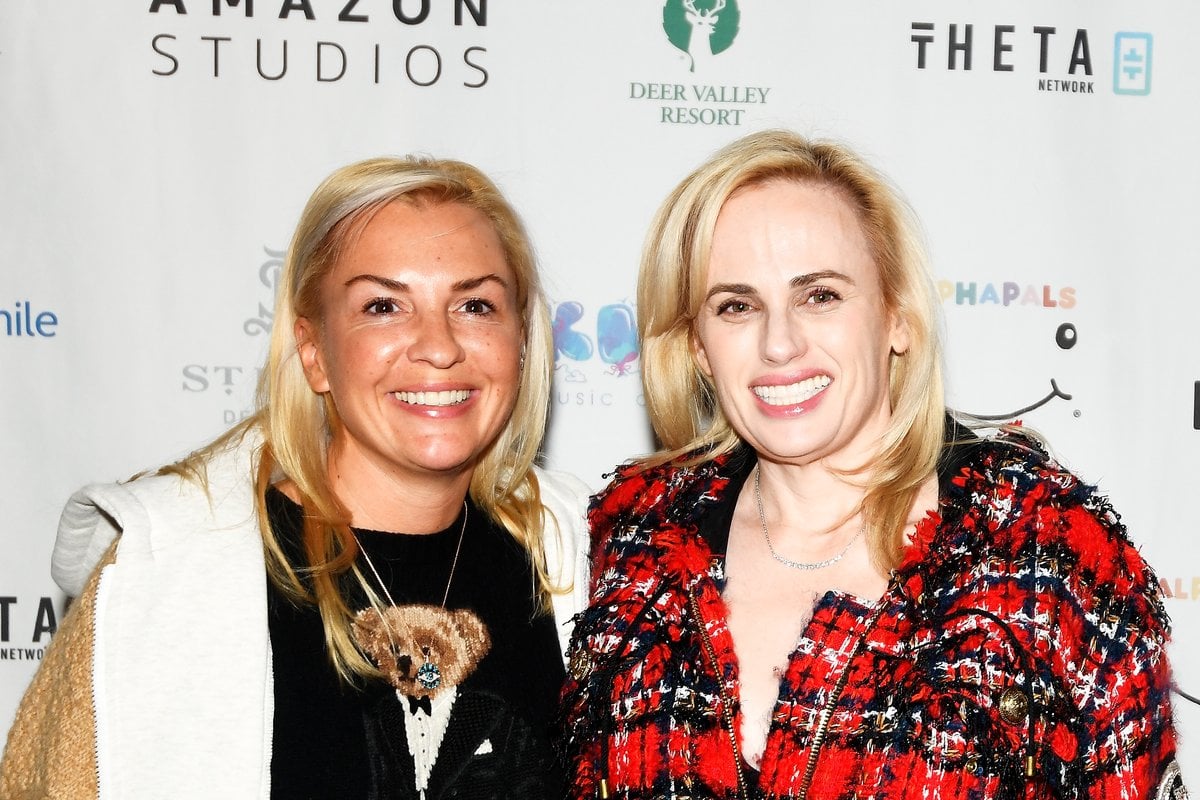 A week after announcing her new relationship to the world, it has been alleged Rebel Wilson was threatened with being 'outed' just a day before she made the announcement.

The Senior Year actor made her relationship 'Instagram official' last week by posting about her partner, fashion and jewellery designer, Ramona Agruma.

"I thought I was searching for a Disney Prince... but maybe what I really needed all this time was a Disney Princess," she captioned a photo of the smiling couple.

While Wilson has only just officially announced their relationship, the couple have been pictured together at various events, most notably on the red carpet at the Vanity Fair Oscars Party in March.

Speaking to People Magazine in May, Wilson confirmed she was in a new relationship.

"We spoke on the phone for weeks before meeting. And that was a really good way to get to know each other," she shared.

"It was a bit old-school in that sense - very romantic. I think going through the process of finding more self-worth, I think that what you want in a partner is elevated, so it's great to have someone who feels like an equal partner and to be in a healthy relationship.

"There were times - I'm not saying with all my exes, they're great - but there were some times that I was probably putting up with stuff that I shouldn't have. So it feels different to be in a really healthy relationship."

Speaking on the Betches podcast U-Up? in May, Wilson shared that she was "happily in a relationship" after being set up by a friend.

"I was on and off on the Raya app, but this was a friend setup," she said. [The friend was later revealed to be actor Hugh Sheridan]. "He had known both of us for at least five years and he thought we would hit it off - and then we did!"

While the response from the public was overwhelmingly positive, many fans were were less than thrilled with a column published in newspaper The Sydney Morning Herald, in which it was revealed the paper initially had the "scoop" on Wilson's same-sex relationship.

In it, the journalist wrote that the paper had made the "big mistake" of emailing her team, giving Wilson a 48-hour deadline to give comment about the relationship.

"Considering how bitterly Wilson had complained about poor journalism standards when she successfully sued Woman’s Day for defamation, her choice to ignore our discreet, genuine and honest queries was, in our view, underwhelming," the journalist wrote.

i am so beyond disgusted at this. turns out rebel wilson only came out to avoid being forcefully outed and now that newspaper is pissed at her for ruining their scoop?? so they wrote this mess?? i am so angry and so sorry for rebel, no one deserves this. pic.twitter.com/PTnTqzr9VI

This is thoroughly depressing. People should be able to come out when they are ready. It can be fraught with emotion, stress and even danger. Do better! Good luck @RebelWilson https://t.co/V72Rhbcmfo

I’ve just read this @smh piece 3 times to make sure that I wasn’t misreading. The publication messaged Rebel Wilson saying they would out her in 2 days - and is now complaining that she chose to announce her relationship with a woman herself. Quite astonishing. pic.twitter.com/qiPZkYFmka

In case you were wondering how Pride Month is going, the @smh got in touch with Rebel Wilson to say they’d be outing her in the next few days, so when Rebel came out herself the journalists are throwing a tantrum that she robbed them of an exclusive.

Wilson responded to one fan on Twitter, admitting it was a "very hard situation" but she was "trying to handle it with grace".

Thanks for your comments, it was a very hard situation but trying to handle it with grace 💗

The journalist at the centre of the controversy has since released an apology in a new column, writing: "I got it wrong. I allowed my disappointment to cast a shadow over the piece. That was not fair and I apologise.

"Celebrities have huge influence in our culture. We still have to ask questions, sometimes very difficult ones. It would be much worse to write gossip items about the unscripted events in their lives without them having a chance to have their say.

"But we need to make it clear that a deadline is not an ultimatum."

Following the global backlash, SMH's editor Bevan Shields released a statement categorically denying they had any intention to 'out' Wilson's same-sex relationship.

"Like other mastheads do every day, we simply asked questions and as standard practice included a deadline for a response," he wrote.

Many high-profile Australians have weighed in on the situation via Twitter.

Bevan
Your paper has no god-given right to know anything about the private life of anyone
I don’t claim to speak on behalf of Rebel Wilson
But for LGBTQIA+ people the consequences of what is nothing more than a hissy fit over who gets to print gossip can have devastating effects https://t.co/mzrpHTsoU5

Bevan, reading this response slowed down my central nervous system. How you brought yourself to publish this is beyond me but I hope there’s at least one thing in your life that you’re more genuine and honest about.

Bevan, I’d LOVE to live in a world where dating a man & dating a woman come with the same social, political, and career-related reaction. We don’t. Straight people may not understand how LOADED disclosing orientation can be. Happy pride. https://t.co/ObDye8NS4x

Rebel Wilson on being a "late bloomer".

Speaking to People in May, Wilson admitted she was a "late bloomer" in her personal life.

"It's not an exaggeration to say no one was really interested in dating me, especially in my 20s," she said.

"I had a snaggle tooth. I was a catch if people really got to know me, but there was nobody really interested.

"But in a way that allowed me to not only have this amazing career and come up out of Australia, out of nowhere, and get two degrees and then come to America and crush it.

"Would I have been able to do that if I had a serious relationship? Probably in my love life I was meant to be a late bloomer, anyway."

Prior to her new relationship announcement, there were rumours Wilson was dating tennis star Matt Reid, but she has kept her love life and relationship status relatively private over the years.

She dated Jacob Busch, the Anheuser-Busch heir, for six months, but they broke up in February 2021.

The couple shared photos from trips to Cabo San Lucas, Mexico and Aspen, Colorado, but Wilson confirmed the breakup when she declared herself a "single girl" on Instagram in February 2021. 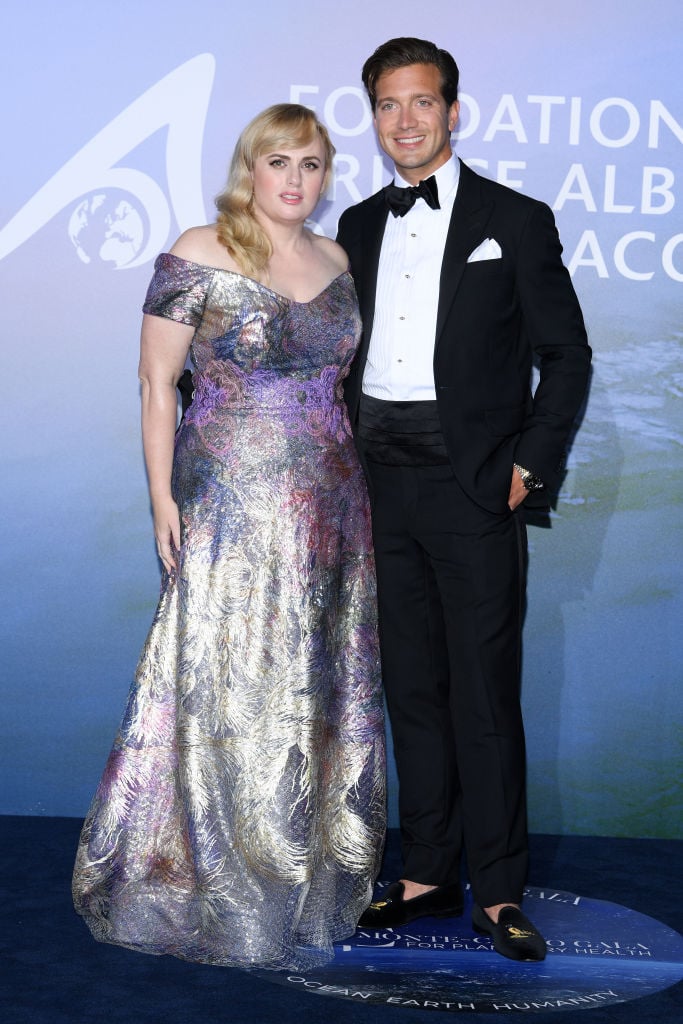 In 2017, Wilson was briefly linked to stuntman Aden Stay after they were spotted having dinner together in Los Angeles. Wilson brought Stay as her date to the MTV Movie Awards in May 2017, but never confirmed their relationship officially.

According to Elite Daily, Wilson was also spotted multiple times with actor and producer Mickey Gooch Jr. The duo were photographed together in New York in August 2017, and they were also seen in May 2019 at the Cannes Film Festival, but their relationship was never officially confirmed by Wilson.

In May 2021, while not openly in a relationship, Wilson posted about her personal struggles with fertility.

Speaking on the topic for the first time, Wilson briefly shared that she received some "bad news" about her fertility.

"I got some bad news today and didn’t have anyone to share it with... but I guess I gotta tell someone. To all the women out there struggling with fertility, I feel ya," she wrote on Instagram.

"The universe works in mysterious ways and sometimes it all doesn’t make sense... but I hope there’s light about to shine through all the dark clouds."

Reply
Upvote
1 upvotes
Absolutely disgraceful. Who she (or any other celebrity) dates is no-one else's business. And then to complain that she chose (under duress) to disclose her relationship and "stole" your scoop - I honestly don't have the words to explain how appalling this is. Thank goodness most of the responses I've seen are decidedly in Rebel's favour, hopefully these so-called journalists are doing a little self reflection. (Yeah, right.)
C
cat 18 days ago

Reply
Upvote
1 upvotes
@rush after they tried to double down, they finally retracted the articles and apologised. But not until they realised they were overwhelmingly on the wrong side of public opinion.
S
snorks 19 days ago

Reply
Upvote
You see '(whoever) did not immediately return our call for comment' or something like that on a lot of stories. Here, they gave them 48 hours, an eternity in a news cycle.
M
mamamia-user-482898552 19 days ago

Reply
Upvote
2 upvotes
@snorks The length of the timeframe is not the issue here. It's the fact they gave one in the first place. Basically: "provide us with an exclusive comment in xx time, or else we'll probably just publish your personal business to the world without your permission or comment anyway". At no time did they offer her any control or veto over the content, timing or very existence of the article they intended to publish.
H
hopey 19 days ago

Reply
Upvote
2 upvotes
@mamamia-user-482898552 Newspapers never give control or veto rights to anyone about any story. Giving 48 hours to provide a comment is very unusual, it's usually same day and depending on when the story breaks, it might only be a couple of hours notice.
S
snorks 19 days ago

Reply
Upvote
3 upvotes
@hopey You're missing the point. They should not have been trying to report on her sexuality in the first place - with or without a timeline. It's not in the public interest to know. Forcibly outing people when it's not on their terms is potentially harmful and they knew that - but they did it anyway. If they were really after a story and her collaboration, they could have approached her to gauge her interest. If she was not interested, they should have respectfully left well enough alone and retained her privacy.
News
General
Opinion
True Crime
Politics
Sport
Explainer
Entertainment
Celebrity
Reality TV
Movies
TV
Books
Rogue
Royal
Lifestyle
Beauty
Fashion
Weddings
Home
Wellness
Health
Fitness
Travel
Food
Family
Before The Bump
Pregnancy
Baby
Kids
Teens
School
Parent Opinion
Work & Money
Money
Finance
Career
Lady Startup
Relationships
Sex
Dating
Separation
Friendship
Family
Real Life
Couples