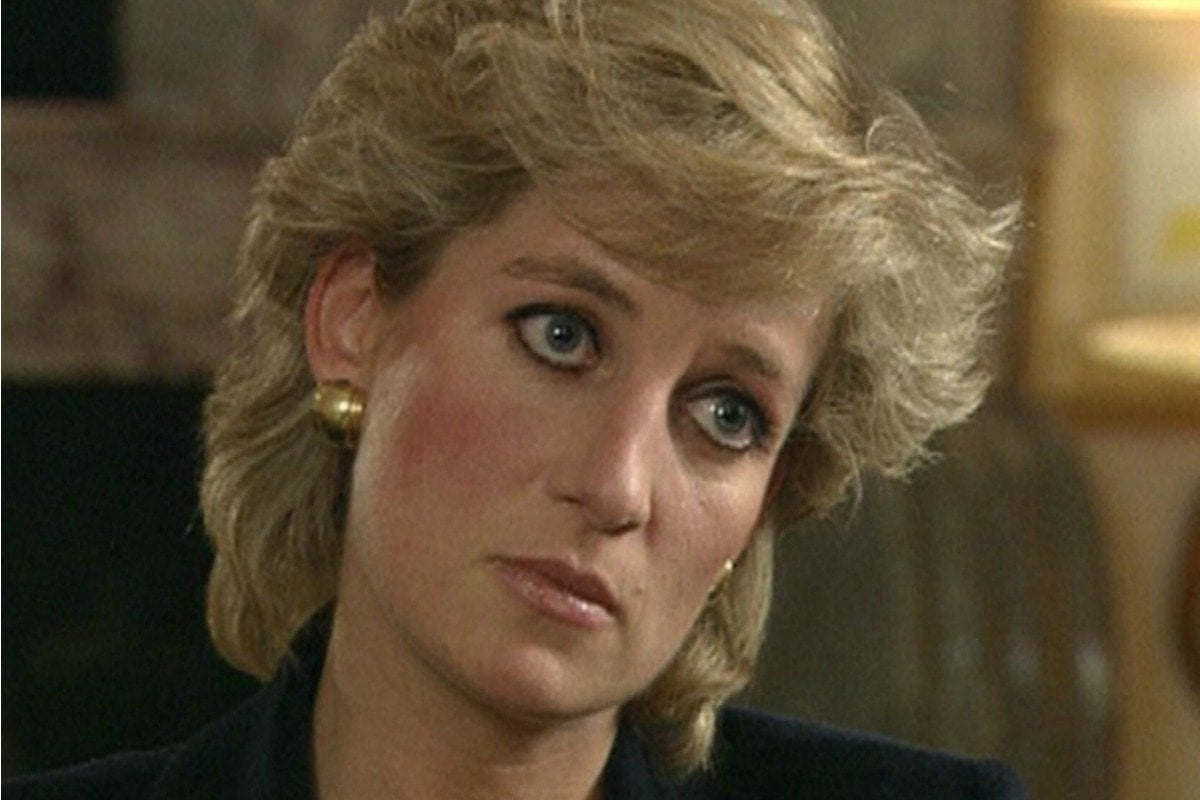 In November 1995, Princess Diana gave one of the most infamous and controversial television interviews in royal history.

She spoke to BBC journalist Martin Bashir about her marriage, life inside the Royal Family, her eating disorder and her struggles with the press, in a sit-down chat that was watched by more than 20 million Britons alone.

She'd agreed to the interview to 'set the record straight' after incessant tabloid speculation about her relationship with Prince Charles.

But 25 years later, the BBC and Bashir were subjected to an investigation - accused of lying and tricking Diana into going on camera, the findings of which have just been released.

Senior judge John Dyson's ruling found that Bashir did use deceit to win the interview, with the BBC guilty of covering up the deception.

Dyson's report on Thursday said that Bashir, then a little known reporter, had shown Spencer fake bank statements to induce him to arrange a meeting with Diana.

"Mr Bashir acted inappropriately and in serious breach of the 1993 edition of the Producers' Guidelines on straight dealing," the report said.

Dyson also concluded the BBC had fallen short of "the high standards of integrity and transparency which are its hallmark" in its response to allegations of impropriety.

Last week, the BBC announced that Bashir was leaving his current job as the publicly-funded broadcaster's religious affairs editor because of ill health.

"While the BBC cannot turn back the clock after a quarter of a century, we can make a full and unconditional apology. The BBC offers that today," BBC Director-General Tim Davie said in a statement.

BBC boss Tim Davie on the “dark day” for the BBC after the Lord Dyson report into the “deceit” which led to the Princess Diana interview in 1995. pic.twitter.com/0oqUHTJL72

The responses from Diana's sons William and Harry are searing, with the Duke of Cambridge releasing a damning statement which he read out to the media.

"It is my view that the deceitful way the interview was obtained substantially influenced what my mother said. The interview was a major contribution to making my parents' relationship worse and has since hurt countless others.

A statement on today’s report of The Dyson Investigation pic.twitter.com/uS62CNwiI8

He credited the interview for contributing to his mother's "fear, paranoia and isolation" in her final years and said she was failed not just by a "rogue reporter" but by "leaders at the BBC who looked the other way rather than asking the tough questions."

The Duke of Sussex also released a statement that read, "Our mother lost her life because of this, and nothing has chanced," thanking those who had taken some form of accountability while stating that "what deeply concerns me is that practices like these - and even worse - are still widespread today."

So what exactly happened during the interview?

What did Diana say during the interview?

The interview was said to be the 'final straw' for Charles and Diana's marriage, with the couple announcing their divorce the following year.

When asked about their marriage she famously told Bashir, "there were three of us in this marriage, so it was a bit crowded" referring to Charles' relationship with Camilla Parker-Bowles.

Watch a snippet of the interview below. Post continues after video.

She also revealed that she had been "in love" with someone else at one point during their marriage, referencing her relationship with James Hewitt, a former household cavalry officer in the British Army.

She spoke openly about her mental health, her struggles with bulimia - describing it as a "symptom" of a bad marriage - and her post-natal depression after the birth of Prince William.

She also spoke about the Royal Family's opinion that she was a "non-starter" because she didn't follow the "rule book."

It was unprecedented. The interview's revelations painted the monarchy as cruel and oppressive, and gave the public more insight into the behind-the-scenes of the institution than ever before.

Some royal experts suggested it plunged the monarchy into the greatest crisis since the abdication of King Edward VIII in 1936, who threw in the throne to marry a divorced American socialite.

It was also, however, the first time Diana had a major falling out with her eldest son William who was "livid" and teased at school because of it. 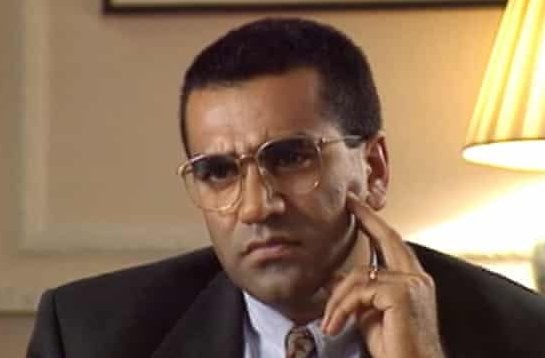 Bashir managed to secure an interview that became the envy of every journalist in Britain. Image: BBC.

"He felt really bad for his mum because of what she had gone through, but he was furious with her. People at school were calling her all sorts of names. The weekend after it went out they had a big row at Kensington Palace. William was furious and Diana was distraught. I was there the day after she spoke to him and Diana was in a terrible state," Diana's friend Simone Simmons told Vanity Fair.

Within a month of Diana's interview, her press secretary had resigned, and the Queen had sent Charles and Diana a letter urging the couple - who had been separated since 1992 - to divorce quickly.

For some context, it was Diana's brother Charles Spencer who introduced Diana to journalist Martin Bashir after being courted by him.

Spencer was shown fake bank statements that supposedly proved that palace courtiers had been selling stories to the press about the princess, preying on fears Diana already had in order to convince her to agree to the interview. 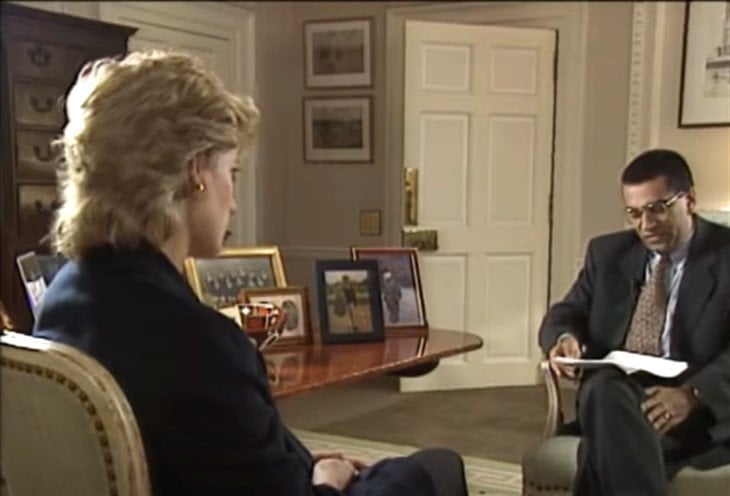 The interview catapulted Bashir to fame and he won awards for the BBC Panorama special, but his own company questioned how he convinced the princess to agree to such an intimate chat, and opened their own internal investigation in 1996.

Despite Bashir's use of mocked up financial records, the inquiry concluded that Bashir had done nothing wrong stating, "The BBC has been able, independently, to verify that these documents were put to no use which had any bearing, direct or indirect, on the Panorama interview with the Princess of Wales."

In November 2020, British station ITV aired a documentary, The Diana Interview: Revenge of a Princess, featuring an interview with Matt Wiessler, the designer who Bashir asked to mock up the documents.

He told the program, "Martin asked me to make up a couple of bank statements that he needed the following day. And he did say they were going to be used as copies. So on that night, I was just making some props for filming purposes."

But Wiessler says he was then used as a scapegoat by the BBC who punished him and let Bashir off the hook so as to not affect the integrity of the now famous interview.

Journalist and director behind the documentary, Andy Webb, obtained internal BBC documents through the Freedom of Information Act that explain the incident in detail.

The documents prove that the inquiry cleared Bashir, letting him off the hook by saying he "wasn't thinking" while punishing Wiessler by stating he'd "never work for the BBC again."

As Weissler told BBC Radio 4, "I couldn't believe it when I saw that FOI release. I was absolutely gobsmacked that in a board of governor meeting, that was there to look into what Martin had done, I was made the scapegoat.

"I don't know how you can plausibly tell a story that a graphic designer is to blame for using copied documents as forgery, and I've been living with this for 25 years."

Diana's brother commented on the findings on Twitter, explaining that while he knew that Bashir had shown him fake bank notes, he was unaware that the BBC not only knew, but that they "covered it up."

2/2 ... what I only found out 2 weeks ago, thanks to journalist Andy Webb’s persistent use of the Freedom of Information Act, is that the BBC also knew. Not only knew about it, but that they covered it up.

Not long after the revelations were aired, Director-General of the BBC Tim Davie announced that the broadcaster had commissioned an independent investigation into the incident, to be led by former judge John Dyson.

The investigation was tasked with looking to see if the steps taken by both the BBC and Bashir, now 57, were appropriate, and to what extent those actions influenced Diana’s decision to give the interview at the time.

As the investigation continued, Dyson was reportedly told Princess Diana was also allegedly tricked into the interview with fake documents claiming royal nanny Tiggy Legge-Bourke had an abortion, reported The Daily Mail.

Diana was reportedly convinced that Prince Charles wanted her and Camilla out of the way so he could marry Miss Legge-Bourke, who was William and Harry's nanny.

According to the Mail (via People), Diana was of the belief, that Prince Charles was having an affair with Tiggy and was suspicious she’d become pregnant with Charles’s baby.

Apparently Bashir showed her a forged receipt in a bid to sway her when she pulled out last-minute from their chat. It's believed she saw the false "proof" as further evidence there was a plot on her life.

Dyson interviewed 17 witnesses as he investigated the BBC interview and The Sun reported he began writing his report just four months after he was commissioned to do so.

Police have confirmed Bashir won't face a criminal probe over allegations he faked bank statements to secure the interview.

In a statement on Thursday, Bashir said he deeply regretted faking the bank statements, calling it "a stupid thing to do". He added, however, that he felt it had "no bearing whatsoever on the personal choice by Princess Diana to take part in the interview".

"Evidence handed to the inquiry in her own handwriting (and published alongside the report today) unequivocally confirms this, and other compelling evidence presented to Lord Dyson reinforces it.

"It is saddening that this single issue has been allowed to overshadow the princess’s brave decision to tell her story, to courageously talk through the difficulties she faced and to help address the silence and stigma that surrounded mental health issues all those years ago.

"She led the way in addressing so many of these issues and that’s why I will always remain immensely proud of that interview."

Reply
Upvote
Why has this just come out now? I wonder if it is a helpful diversion from Johnson's woeful COVID response and an excuse to undermine the credibility of public broadcaster the BBC. Doesn't that ring a few bells.

Reply
Upvote
@anonymous no, Diana’s brother brought it up late last year, I think because there was a new wave of interest in Diana because of The Crown. The BBC discredited themselves, it was insane to think they could rehire Bashir and no one would blink.