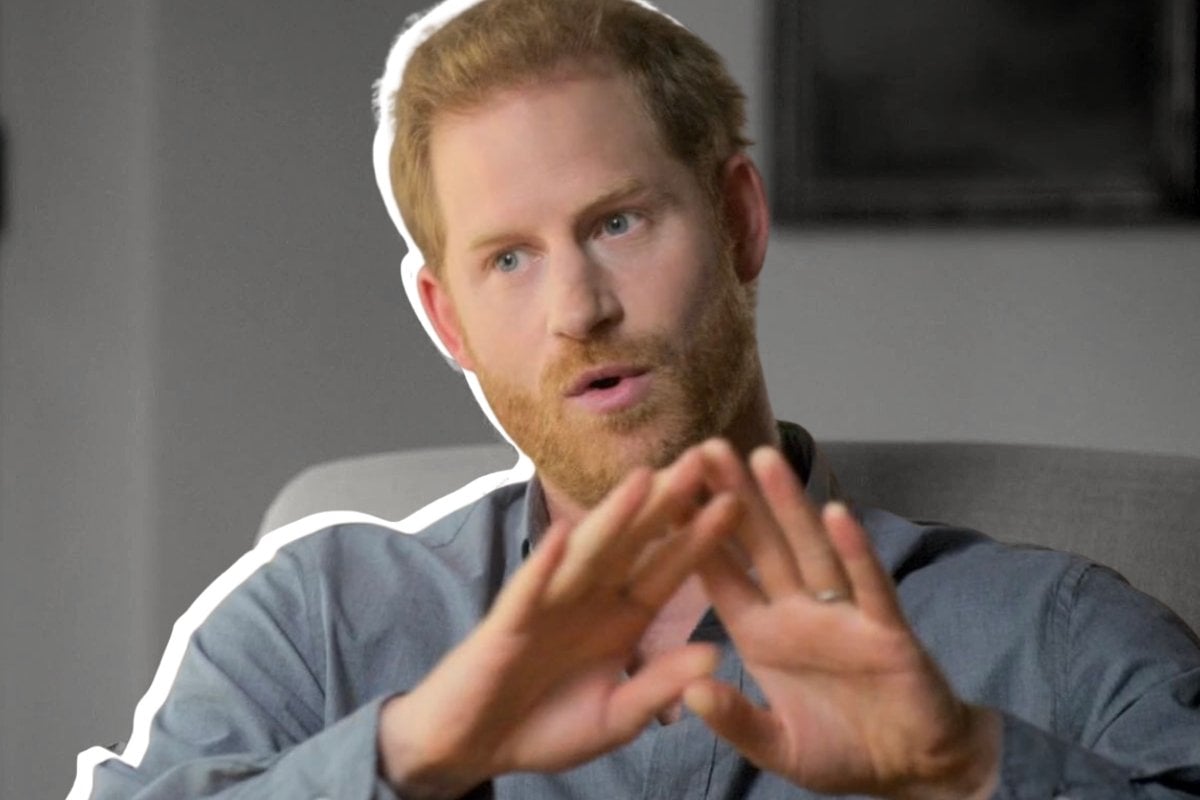 They've been sifting their way through an especially divisive year of content, what with pandemic-related policies, political scandal, and reignited geopolitical conflicts.

Then, out of nowhere, comes a surprise inclusion: Prince Harry goes on the telly to explain why he and his wife, Meghan, Duchess of Sussex, ditched their royal duties and started their new Californian existence (replete with rescue chickens and walks on the beach).

Watch: 'The Me You Can't See' features Prince Harry among its many stories of mental health.

Believe it or not, it's become one of the most engaged-with news stories of 2021 so far.

Comments on online articles and social media are thick with debate about the virtues of the royal's decision to regale his experience for the cameras. Three times. The first being a light-touch interview on The Late, Late Show with James Cordon; the second, the March tell-all with Oprah Winfrey; and now, the recently released Apple TV mental health documentary series, The Me You Can't See on which he and Winfrey serve as executive producers.

Across the two programs, Harry spoke about some of the key challenges he faced across his life as a working royal: the trauma caused by the 1997 death of his mother, Princess Diana; his struggles with unresolved mental health conditions (which he said manifested as drug and alcohol abuse, anger, anxiety during public events, and more); his helplessness in the face of the tabloid media's pursual of his mother and wife; and the lack of support he and Meghan received from the palace and his family when she told them she was suicidal.

Harry sees truth telling as a long-term solution to the hurt and the silence, a way of preventing it from reverberating through future generations of his family. As he said in The Me You Can't See, "If you suffered, do everything you can to make sure that, whatever negative experiences you had, you can make it right for your kids."

But in laying all this — and much more — bare, he's angered many.

Listen: Should Prince Harry go easier on his father? The Mamamia Out Loud team discuss. Post continues after podcast.

Critics see a man publicly shaming his family, alienating them, and profiting from the process.

And they're right. He is likely to profit from these interviews. Albeit indirectly.

Neither he nor Meghan received a paycheck for the original Oprah interview, and it's unclear if the same applies for The Me You Can't See. But since moving to the States, the couple has established a production company and signed multi-million-dollar deals with Netflix and Spotify. And with all the sustained attention on them, other brands are almost certain to be circling.

And yes, the division in his family is truly sad, particularly that between him and his brother, Prince William, Duke of Cambridge.

But any hurt or anger is theirs to feel. Not ours.

Setting aside the second-hand outrage, looking at the real-world consequences for the average person, these interviews are far less contentious than the comments sections would suggest.

What have his interviews meant for us? They've meant that we see a high-profile man on the television talking openly about mental health, highlighting the complexities of it. A man sharing some of the insights he's gained from confronting his trauma and anxiety, showing precisely what undergoing EMDR therapy (as he did on The Me You Can't See) looks like, and chipping away at stigma that keeps people in silent suffering.

Surely, we're richer for it?

If you think you may be experiencing depression or another mental health problem, please contact your general practitioner. For immediate support, call Lifeline on 13 11 14 or beyondblue on 1300 22 4636.

Reply
Upvote
2 upvotes
Any outrage is theirs to feel is a pretty intellectually lazy way of excusing his petty and treacherous behaviour. These are public figures whose whole purpose is arguably to behave in particular ways which he has entirely flouted. If he can trade on his royal privilege to induce us to listen then we can judge him for failing to fulfil his royal duties. And no the fact that he drones on about his mental health and has had lots of high priced therapy does not of itself make his interviews a good thing, not if what he has spouted is what passes for insight.
C
cat 8 months ago

Reply
Upvote
@nyetek you realise he resigned as a royal, right? You don’t have to stick to the guidelines of a job you’re no longer being paid to do.
G
guest2 8 months ago

Reply
Upvote
2 upvotes
@cat If he has resigned as a Royal, it means giving up his titles, or at least not using them.
<
<deleted> 8 months ago

Reply
Upvote
1 upvotes
@guest2 no it doesn't, there are hundreds of thousands of people with titles out there who don't get paid to be public figures. As the Queen knows, so she didn't remove them. He doesn't have to give up his title just because you don't like him.
J
jenran 8 months ago

Reply
Upvote
4 upvotes
I read so many comments critical of both Harry and Meghan for giving their reasons for leaving their royal jobs.  Should they not be allowed to give their own side to their story, when they have been so harshly condemned by media for "letting the side down"?  Effectively, they are just like any employees who have resigned from a position they have found to be intolerable to them, regardless whether or not it is a family company.  The media bashing they have received both before and after the split would be enough to drive anyone to unload as they have done, and I hope that they can now find some peace of mind in a new life, wherever they choose.
C
chrissyinthemiddle 8 months ago

Reply
Upvote
2 upvotes
@jenran Sadly, it’s appears from all the interviews etc that Harry is unable to move on. However, the royal family appears to. William & Kate look happy and relaxed on the current Scotland tour. I’m sure there is deep sadness there but there is nothing more they can do for Harry. Unfortunately their previously loved family member has now turned against them and has become toxic. No one is upset they left because it’s become increasingly clear that this is the best thing for both parties.
C
cat 8 months ago