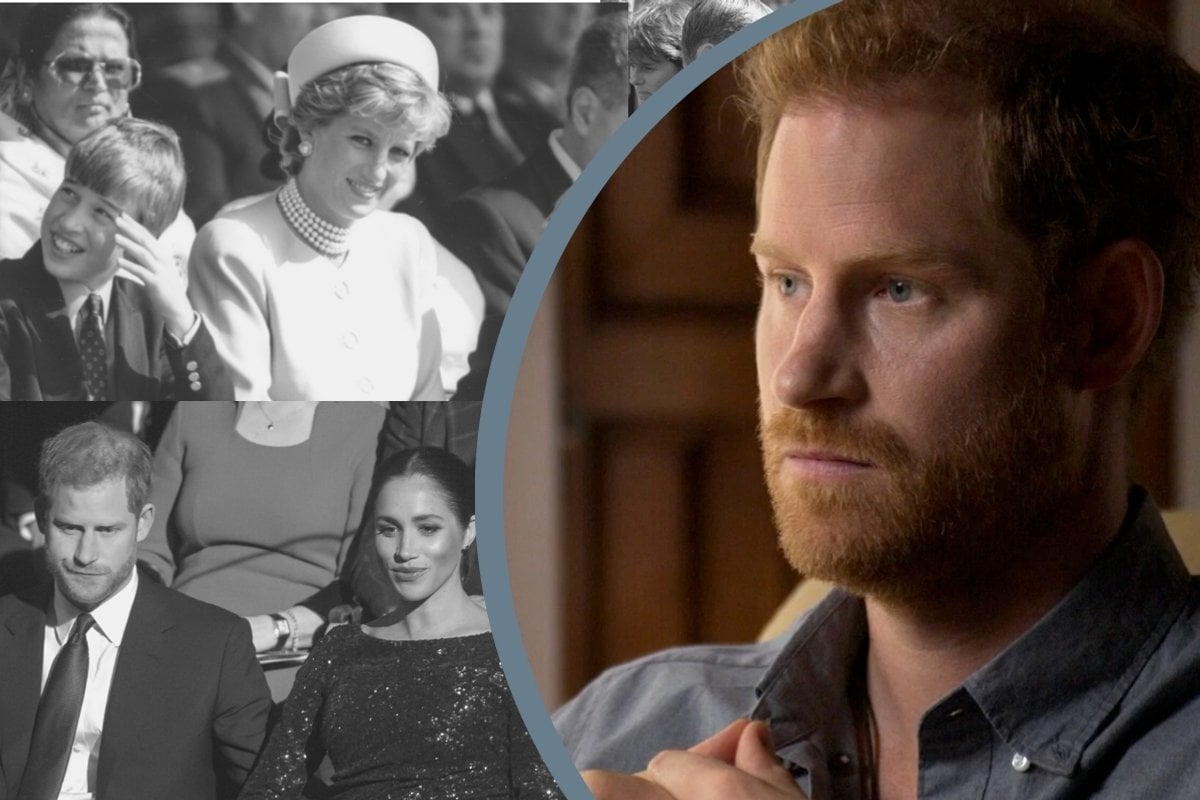 Warning: The following deals with suicide and may be triggering for some readers.

'Harry' is precisely who the British royal has always wanted to be. Not Prince Harry. Not His Royal Highness. Just Harry.

Having stepped back from his role as a senior working royal in early 2020, the 36-year-old is relishing his new independent identity, using his freedom from the Palace to speak publicly about mental health.

Watch: The Me You Can't See shows the new Harry.

Through various interviews, we've had an unprecedented glimpse into his struggles, his trauma, and that of his wife, Meghan, Duchess of Sussex, with whom he now lives in California with their young son, Archie. (They are expecting a second child, due some time in winter.)

There was the couple's tell-all interview with Oprah back in March, Harry's recent episode of the Armchair Expert podcast, and now this: a five-part series produced by Harry and Oprah featuring discussions about mental health and emotional wellbeing, which features everyone from Lady Gaga to a Syrian refugee.

Harry's story runs throughout and treads similar ground to his previous interviews. But there are some never-before-public insights into the man once at the core of a famously private institution.

Here are some of the key moments of his appearance.

Much of Harry's portion of the series delves into the trauma caused by the death of his mother, Princess Diana, in 1997, when Harry was just 12 years old.

Reflecting on his memories of Diana, Harry told Oprah Winfrey that the same one comes to mind over and over.

"Strapped in the car, seatbelt across, with my brother in the car as well, and my mother being chased by three, four, five mopeds with paparazzi on. She was always unable to drive because of the tears. There was no protection," he said.

"One of the feelings that comes up with me always is the helplessness. Being too young, being a guy but being too young to help a woman, in this case, your mother. And that happened every single day."

As a child, Harry felt unable to talk about his mother's death.

Harry said he didn't process his mother's death properly at the time. In fact, he actively ignored it for several years.

"I wasn't in an environment where it was encouraged to talk about it either. That was, kind of, squashed." 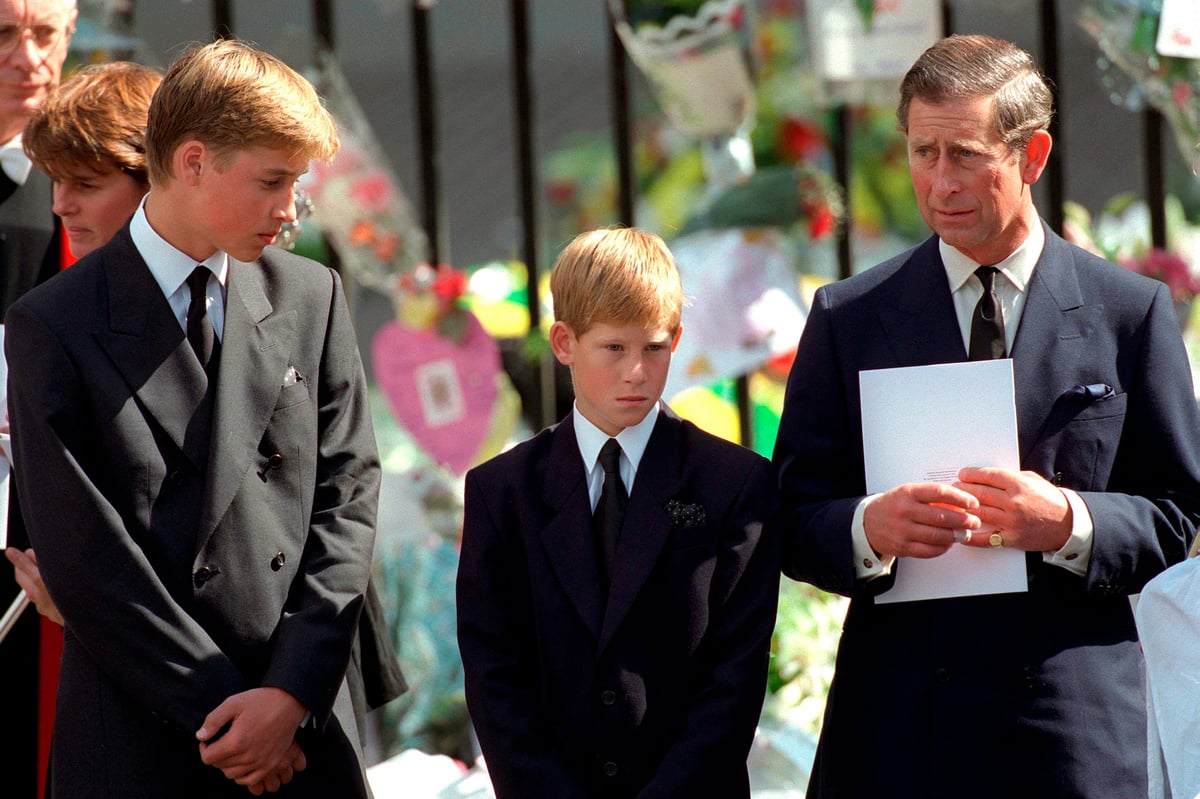 The most comfortable Harry felt was in a war zone.

Harry said the happiest times of his young life were the 10 years he spent in the armed forces.

"That was where I felt my most normal. And actually within my younger years, the most comfortable I ever felt was actually out in Afghanistan, away from the media."

While the outside world saw a composed young man shaking hands, cutting ribbons, small-talking with members of the public, Harry claims his early adulthood was a time of immense internal struggle.

The sound of camera shutters and shouting media brought back those memories of his childhood, of his mother being hounded and chased.

"I was just all over the place mentally," he said. "Every time I put a suit and tie on, having to do the role... before I'd even left the house I was pouring with sweat, my heart rate [rose]... I was in fight-or-flight mode. Panic attacks, severe anxiety."

From the ages of 28 to 32, he said, he tried to mask it through substance abuse. It's a period he described as "a nightmare time in my life".

It was around that time that confronting thoughts entered his mind.

"I was starting to ask questions of, 'Should I really be here?'" he said. "And that was when I suddenly started going, 'You can't keep hiding from this.'"

It wasn't until he met his now-wife that Harry accepted that he needed to seek ongoing, professional help for his mental health; something he'd never felt supported to do before.

The pain he'd carried for years had been manifesting as anger and, following an argument, Meghan told him he ought to "see someone".

"I knew that if I didn't do therapy and fix myself, I was going to lose this woman who I could see spending the rest of my life with," he said.

He's now been in counselling for more than four years.

As revealed in the couple's previous Oprah interview, Harry wasn't the only one struggling with his mental health. Amid the public and media scrutiny and lack of agency that came with her new life as a royal, Meghan began experiencing suicidal thoughts.

She confided in her husband on January 16, 2019. She was six months pregnant. 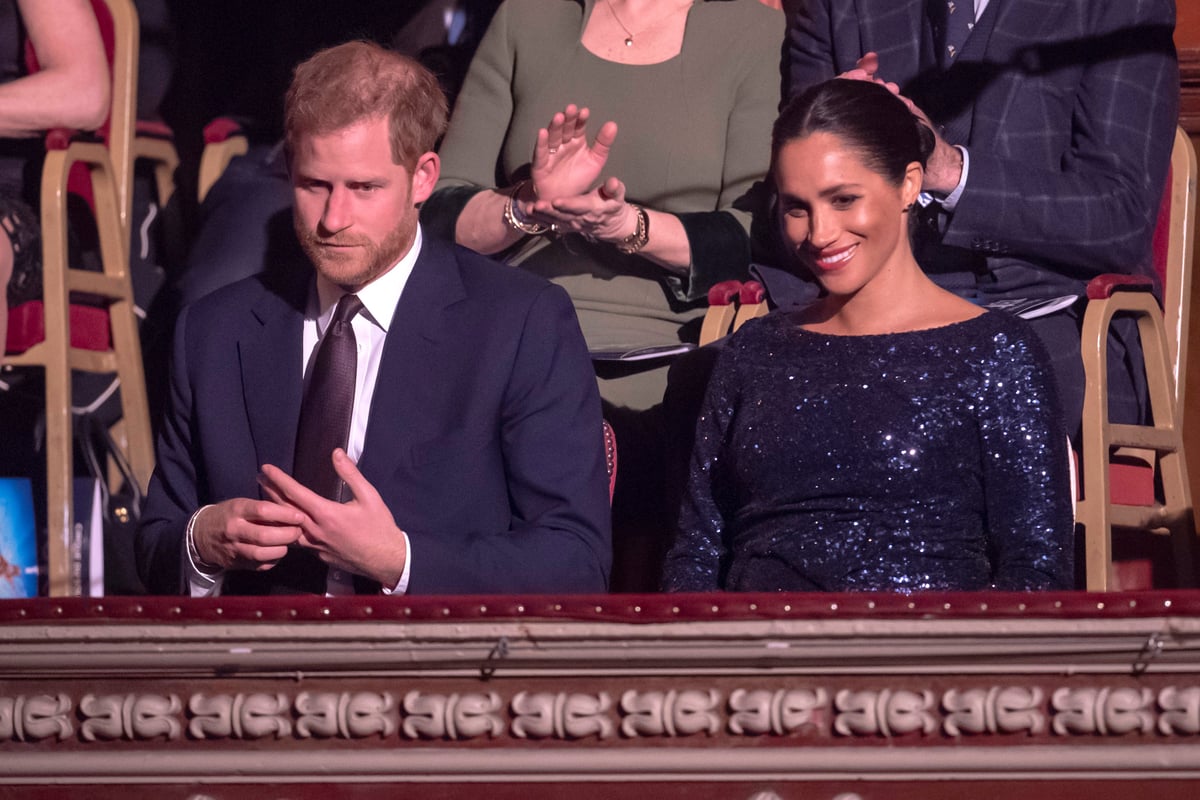 Meghan Markle and Prince Harry at an event, just hours after the Duchess of Sussex shared her mental health struggles with her husband. Image: Getty.

"I'm somewhat ashamed of the way that I dealt with it," Harry said on The Me You Can't See. "We had a quick cuddle and then we had to get changed, had to jump into a convoy with a police escort and drive to the Royal Albert Hall for a charity event. And then step out into a wall of cameras and pretend as though everything's okay.

"There wasn't an option to say, 'Tonight, we're not going to go.' Because just imagine the stories that come from that."

During the series, Harry reiterated that he and Meghan felt unsupported by his family during their mental health struggles. He said they were "met with total silence or total neglect", that he was encouraged to simply "play the game" with the press.

"That doesn't make sense! Just because you suffered, that doesn't mean that your kids have to suffer. In fact, quite the opposite. If you suffered, do everything you can to make sure that, whatever negative experiences you had, you can make it right for your kids."

Why Harry is speaking out.

Harry said he is determined to break that cycle, to ensure that history doesn't repeat itself; for him and his wife, and for his son.

It's famously why they made the decision to leave their roles behind for a new life in the United States, where Meghan was born and raised. It was a case of prioritising their mental health over their obligations to the Crown.

"That was one of the biggest reasons to leave," he said. "Feeling trapped and feeling controlled through fear, both by the media and by the system itself, which never encouraged the talking about this kind of trauma. But certainly now, I will never be bullied into this kind of silence."

He added, "Family members have said, 'Play the game and your life will be easier.' But I've got a hell of a lot of my mum in me.

"I feel like I'm outside of the system but I'm still stuck there. The only way to free yourself and break out is to tell the truth."

One of Archie's first words was about Diana.

Harry says that thanks to therapy, he now feels comfortable in his skin, never experiences panic attacks, and has a clarity of perspective that he never thought he'd enjoy.

He also said that he has never felt his mother's presence more than he has in the past year. He believes that she would be "incredibly proud" of him, because he's living the life she wanted for herself – and for him.

"I wish she could have met Meghan, I wish she was around for Archie," he said.

"I've got a photo up in his nursery and one of the first words he said, apart from 'mumma' and 'pappa', it was 'grandma'. Grandma Diana. It's the sweetest thing, but at the same time, it makes me really sad. Because she should be here."

The Me You Can't See is available to watch on Apple TV+ now.

If you think you may be experiencing a mental health problem, support is available. Please call Lifeline on 13 11 14 to speak to a trained crisis supporter.

Reply
Upvote
2 upvotes
I’m unsure how lashing out at his family is beneficial to others who are suffering and needing hope. Rather, this is what unresolved anger and being stuck in a cycle of blame looks like. Letting go of the hurt and anger, as hard as that is, is a vital step in the healing process. I fear his ongoing pain and anguish is being used by calculating people to further their own commercial interests. His mother’s fears and emotions were manipulated for the BBC interview and I wonder how Harry’s recent interviews will be viewed in years to come. Could this be the case of history repeating itself?

Reply
Upvote
1 upvotes
@chrissyinthemiddle The only other alternative to account for his behaviour is that he's a nasty piece of work with no sense of personal accountability. So as much as I wouldn't wish unresolved mental health issues on anyone, here's hoping he actually has some kind of excuse for his behaviour at the moment.

Reply
Upvote
1 upvotes
@mamamia-user-482898552  I  wonder if it is too easy these days to excuse bad behaviour and character flaws as a mental health issue?

Reply
Upvote
1 upvotes
@chrissyinthemiddle I fully agree. It's sad watching this play out. It doesn't make any sense to sit and talk about compassion and kindness and healing while ACTIVELY hurting your family. I'm not sure if he perhaps just fully believes this rewritten narrative? Where everything and everyone before Meghan was cruel and now everything's better? I think talking about mental health is so great and I hope Harry being open about it is helping some people but this is tough to watch as he seems so in the middle of it. Maybe there's something useful in that?

<deleted> a month ago

It wasn't until he met his now-wife that Harry accepted that he needed to seek ongoing, professional help for his mental health; something he'd never felt supported to do before.

Harry was interviewed by Bryony Gordon in 2017 for a podcast about mental health. In it, he claimed to have been in therapy for 2-3 years prior, and had been supported by his brother in that endeavour. He also said he would never been able to assist in the establishment of the Invictus Games (in 2014) were it not for the fact that he had worked through his mental issues prior.
And how he's flagrantly re-writing the narrative. Credibility - zilch.

Reply
Upvote
1 upvotes
@mamamia-user-482898552 if you actually go and read what he says, he had therapy for trauma earlier in his life. But when he met Meghan he realised that he needed *ongoing* long-term help, to deal with the issues created by growing up in the Royal family, so that he wouldnt recreate those issues with his own family.
You cant just take second hand statements out of context and accuse people of lying.

Reply
Upvote
6 upvotes
@mamamia-user-482898552 yep
From Vogue
It was only three years ago, Prince Harry tells Gordon, that he began to seek counseling and receive the support he needed, in part thanks to the concern and encouragement of Prince William (proving, as we all suspected, they are the dearest and best of brothers).
“My brother was a huge blessing. He kept saying ‘This is not right, this is not normal—you need to talk about stuff. It’s not normal to think that nothing’s affected you,’ ” Harry said. “All of a sudden, all of this grief that I have never processed started to come to the forefront.”