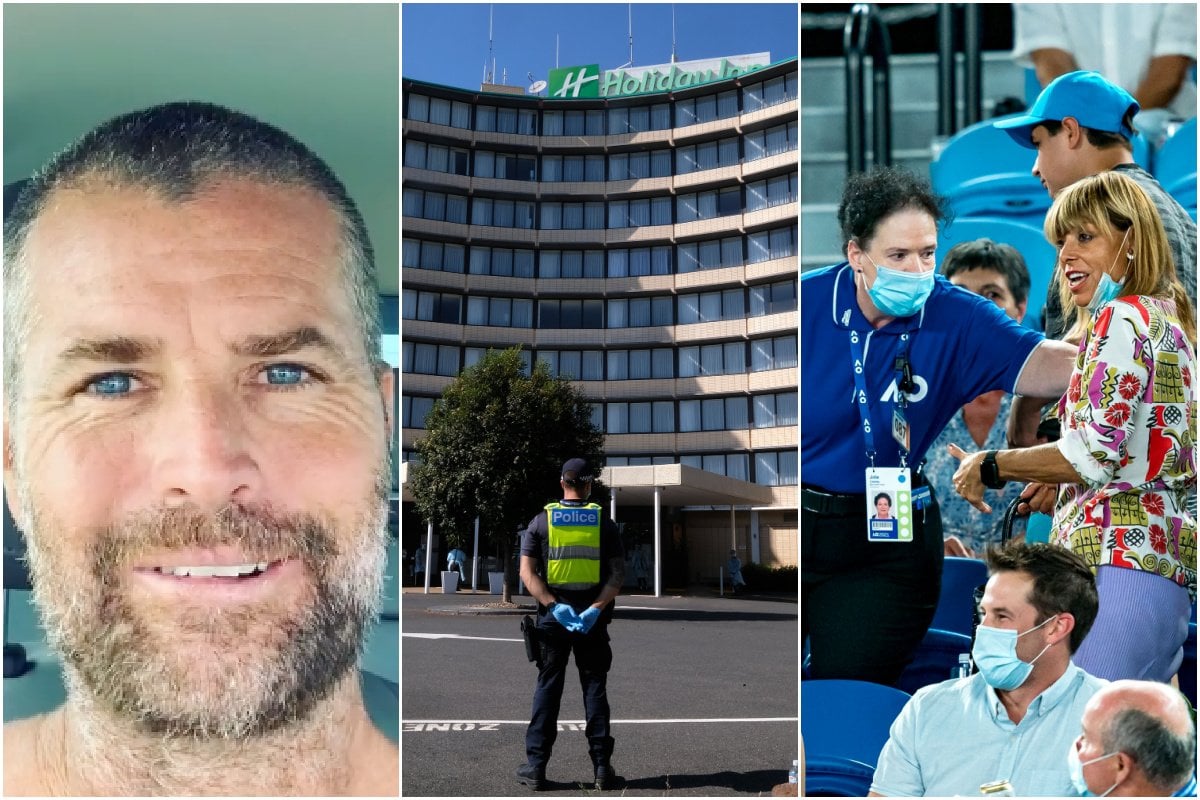 Authorities have worked into the night to identify any additional exposure sites stemming from Victoria's growing Holiday Inn outbreak.

The Melbourne Airport quarantine hotel cluster has risen to 13 cases, with fears of a third wave rising.

Among the new cases are a female assistant manager at the hotel and two men, both partners of female food and beverage attendants.

One of the spouses may be linked to Camberwell Grammar School in Melbourne's east.

"We believe there will be some additional exposure sites emerging from some of these cases," Victoria's COVID-19 testing boss Jeroen Weimar told reporters on Thursday.

Melbourne is reportedly on the verge of a snap lockdown after the Holiday Inn coronavirus outbreak grew to 13 cases overnight.@NathanJCurrie and @NathanTemp7 are there with the latest.

"That work needs to be done over the coming hours."

The emerging cluster has prompted several states to tighten their borders to travellers from Greater Melbourne.

South Australia locked out travellers from the Victorian capital at midnight on Thursday, while Queensland will bar entry to visitors of the city's exposure sites from 1am on Saturday.

Western Australia also announced its hard border to Victoria would be extended for at least another seven days.

Pete Evans announces he will run for the Senate as a Great Australia Party candidate.

Celebrity chef and controversial anti-vaxxer Pete Evans has confirmed he will join politics and run for the Senate with former One Nation senator Rod Culleton’s The Great Australian Party.

"Pete Evans has maintained his principles and inspired others in the face of uncommon adversity,” a statement from Mr Culleton said overnight. “Pete is fully supportive of the GAP ethos, supporting restoration of the Commonwealth and the preservation of democracy in Australia."

Evans teased the news a month ago on his Instagram.

“The only thing necessary for the triumph of evil is for good men to do nothing," he wrote next to a logo for The Great Australian Party.

Evans has previously tried to sell an 'energy machine' to treat COVID-19, was dumped by his publisher for posting a well-known Nazi symbol, has suggested bone broth as an alternative to baby formula, thinks the Paleo diet can treat autism and cancer and thinks the entire pandemic is a conspiracy.

Twice as many customers will be allowed back in NSW cafes and restaurants from Friday, with a suite of restrictions relaxing across Greater Sydney.

The state has reverted back to the two-square-metre rule for indoor venues and outdoor events, and mandatory mask use has been scrapped in a number of settings.

Face coverings are now optional in hairdressers, beauty salons, places of worship and hospitality, but will remain mandatory on public transport, in taxis and Ubers.

When announcing the changes on Wednesday, Premier Gladys Berejiklian said while masks would become optional in many indoor places, they are still strongly recommended.

Gyms will maintain the four-square-metre rule, while caps on weddings and funerals remain at 300.

Only 20 guests will be allowed to dance at weddings and singing in public remains capped to five people.

Australia's first shipment of coronavirus vaccines has been formally approved by the European Union and will arrive in the country within weeks.

Prime Minister Scott Morrison has not said when the jabs will reach Australian shores, but he will have more to say "in the not too distant future".

He praised the health and foreign affairs ministers for their work in navigating the European export restrictions, and acknowledged the "extreme pressures" on European vaccine supplies.

"Australia has done very well to maintain our supply lines here as has been confirmed by the European Union," he told reporters in Melbourne on Thursday.

Chief Medical Officer Paul Kelly says confirmation the EU would not block Pfizer exports to Australia means the vaccine rollout is on track.

"We are definitely on track for the first vaccines in Australia of the already TGA-approved Pfizer vaccine before the end of February."

Rafael Nadal has laughed off a crowd heckling interruption to win his second-round Australian Open clash with American Michael Mmoh.

The match was briefly stopped late in the second set as a woman started shouting at Nadal for no apparent reason.

Despite the spectator yelling obscenities and raising her finger at him, the Spaniard simply smiled and watched as security escorted her out of Melbourne Park.

When asked on-court post-match if he knew the woman, Nadal replied: "No, and honestly, I don't want to know."

#WATCH: A fan has been ejected from the #AusOpen for flipping the bird and yelling at Rafael Nadal during his second round match. #9News pic.twitter.com/AlLXxNB32N

Reigning Australian Open women's champion Sofia Kenn has broken down in tears after her second-round exit to Kaia Kanepi.

The 22-year-old admitted the nerves and the expectation of being a defending champion got to her, wiping away tears as she spoke to the media after the 6-3 6-2 loss.

Sofia Kenin's bid to defend her Australian Open title ended in disappointment on Thursday after she was knocked out of the tournament by world No. 65 Kaia Kanepi. https://t.co/4q7V0aYQHv

"I felt really nervous. I haven't felt my game for, like, I don't know how long, but I haven't really felt my game so well, even in my first round," she said.

Democrats argue rioters acted on "the president's orders" during the impeachment trial.

House Democrats prosecuting Donald Trump's impeachment say the US Capitol invaders believed they were are acting on "the president's orders" to storm the building.

The prosecutors are wrapping up their opening presentation on Thursday, describing in stark terms the horror they faced that day and drilling down on the public instructions Trump gave his supporters - both in the weeks before the January 6 attack and at his midday rally before a mob assaulted the Capitol.

They presented videos of rioters, some posted to social media by the rioters themselves, talking about how they were doing it all for Trump.

Officer: "We need units. We're surrounded ... They are behind our lines." pic.twitter.com/0zEU7Str2H

"They truly believed that the whole intrusion was at the president's orders," Representative Diana DeGette of Colorado said. "The president told them to be there."

Trump's lawyers will launch their defence on Friday.

At the White House, President Joe Biden said he believed "some minds may be changed" after senators saw chilling security video on Wednesday of the deadly insurrection at the Capitol, including of rioters searching menacingly for House Speaker Nancy Pelosi and Vice President Mike Pence.

Democrats are using their remaining hours of arguments to lay out the physical and mental harm caused by the attack, discuss Trump's lack of action as it unfolded and do a final presentation on the legal issues involved.

Meghan, Duchess of Sussex, has won her privacy case against a tabloid newspaper which printed extracts of a letter she wrote to her estranged father after a London High Court judged issued a summary judgement in her favour.

Meghan, 39, the wife of Queen Elizabeth's grandson Prince Harry, had sued publisher Associated Newspapers after its Mail on Sunday tabloid printed parts of the handwritten letter she sent to her father, Thomas Markle, in August 2018.

Duchess of Sussex Meghan Markle wins High Court privacy claim against Mail on Sunday newspaper over publication of letter to her father https://t.co/JpAA0hr3G4

Judge Mark Warby ruled the articles did breach her privacy.

However, he said issues relating to her copyright of the letter would need to be settled at a trial.

Danish authorities say seven people have been remanded into pre-trial custody on suspicion of planning one or more terrorist attacks.

The suspects were detained during a large anti-terror operation over the weekend and are accused of acquiring "ingredients and components for the manufacture of explosives as well as weapons" or being accomplices, the PET security service said.

A further six people were to face remand hearings later on Thursday in related cases.

At the weekend, Danish police were sighted at a location in the town of Holbaek, west of Copenhagen.

Another suspect has been arrested in Germany, the PET said in a statement.

- The coronavirus variant first found in the British region of Kent is a concern because it is mutating and so could undermine the protection given by vaccines against developing COVID-19, the head of the UK's genetic surveillance program says.

She also said the UK variant was dominant in the country and was likely "to sweep the world, in all probability".

- China has banned all circulation of the BBC within its borders, accusing the British broadcaster of failing to meet media requirements and undermining the country's national interests.

Reply
Upvote
"Pete Evans announces he will run for the Senate as a Great Australia Party candidate."
Note the references to "Great" and the "Constitution".
I feel like they're borrowing heavily from somewhere...
Surely, not as a deeply cynical move to tap in to Australian voters in conspiracy-embracing digital bubbles that they share with American conservatives? That's not Pete's style, at all.
Good Evans, surely this will Peter out.
C'mon, Australia, we're savvier than this.
R
rush a year ago

Reply
Upvote
3 upvotes
I'm a bit surprised that the hotel workers don't have to quarantine while not working. I know that would be hard on them, (and they should be paid more for that reason) but they seem to be the weak link here.
C
cat a year ago

Reply
Upvote
1 upvotes
@rush it’s pretty crazy isn’t it. It would definitely be a tough gig and you’d want to pay them the way FIFO workers are paid, but surely that would be worth it to avoid breaches. And with plenty of people only going to work and staying home the rest of the time it wouldn’t be that onerous for them.
I can’t believe WA have only just made it mandatory for quarantine workers to wear masks...
News
General
Opinion
True Crime
Politics
Sport
Explainer
Entertainment
Celebrity
Reality TV
Movies
TV
Books
Rogue
Royal
Lifestyle
Beauty
Fashion
Weddings
Home
Wellness
Health
Fitness
Travel
Food
Parents
Before The Bump
Pregnancy
Baby
Kids
Teens
School
Parent Opinion
Work & Money
Money
Finance
Career
Lady Startup
Relationships
Sex
Dating
Separation
Friendship
Family
Real Life
Couples