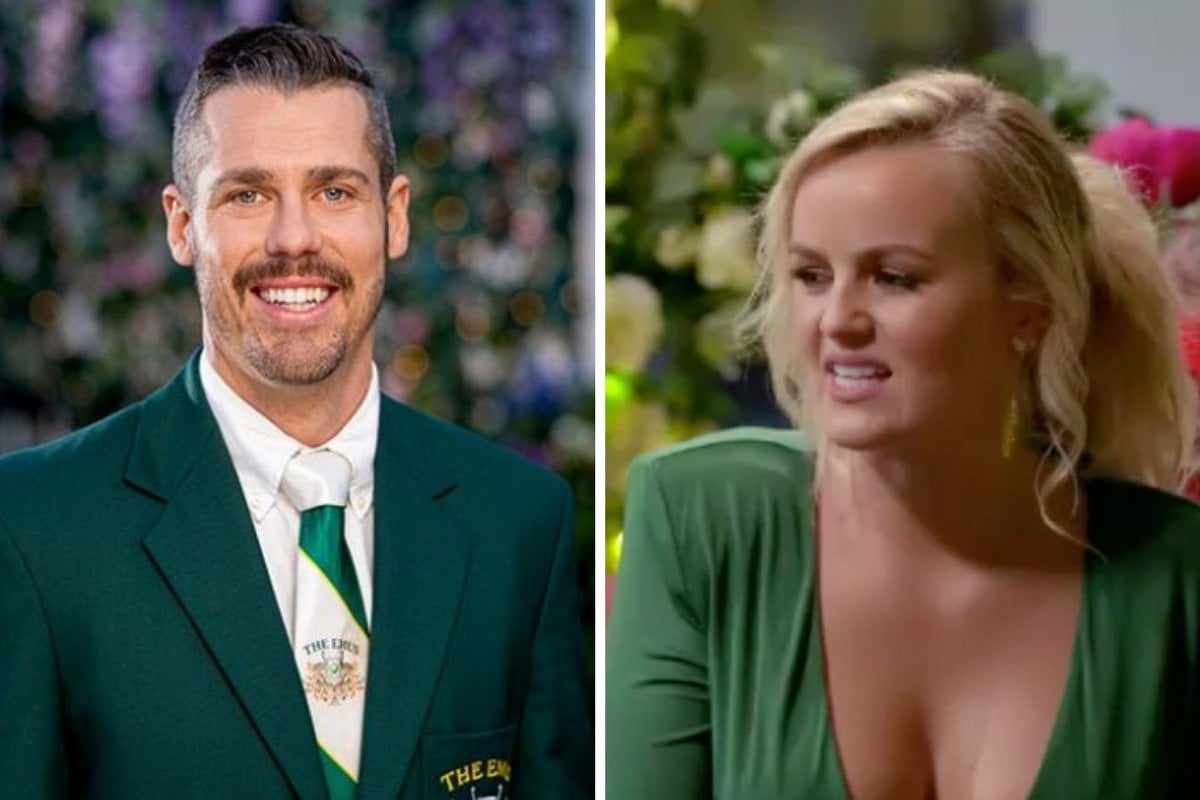 Tonight we got to know (and got to really dislike) one contestant on The Bachelorette: Pascal Wallace.

While Pascal flew under the radar for the first couple episodes, with only a few fans spotting his rather luscious moustache, he came smashing into the plotline in tonight’s rose ceremony.

Watch the trailer for The Bachelorette Australia 2020. Post continues after video.

During the group date, Becky and Elly Miles employed their cousin and a mate from their hometown to snoop on the boys while posing as bus drivers. While this ~snooping~ was underway, Pascal piped up for the first time this season and did something that absolutely no one should condone.

Need we remind you, sir, that this is The Bachelorette? You know, that global franchise that is built on one (or two) girls dating 30 people at once? If you have a problem with women kissing people while on dates, then perhaps a different show would have been a better pick for you.

While we thought that statement would have been the source of drama for the rest of the episode, Pascal actually managed to take it further.

During the cocktail party, Becky somewhat interviewed Agostino (who seems like a lovely chap) about what exactly Pascal had been blabbering on about in the house.

Agostino stated, “I’ll be straight to the point. Pascal has said some comments that are disappointing, disrespectful and shallow. He said, which is completely untrue, ‘Could they find hotter chicks’.”

Obviously, this went down like a lead balloon with the girls. And who can blame them? First Pascal slut shamed, then he body shamed them.

Once debriefing together, the sisters decide to confront Pascal and clarify exactly what has been said. Storming up to him, Pascal foolishly says, “Hello, hello, you girls look beautiful,” somewhat contradicting his prior foul commentary.

Then we dive into the conversation, where Pascal throws out some of these nuggets.

“This conversation surprises me.”

Elly: “So there’s no comments that you’ve said around the house to any of the boys or on your drive in to the group date that you think you should tell us about?”

Pascal: “No, not that I can remember at all.”

“I’m confused as to where this has come from?”

“Nothing in my personality would do that.”

Pascal remains calm, cool and collected the entire time. He’s measured, breathing easy. And that says to us that he may have been in this situation before. He may have been called out and questioned and he knows the best way to respond is with confidence and backing yourself to a level that convinces the person you’re talking to that you are in the right - making them, therefore, in the wrong.

And that, ladies and gentlemen, is the definition of gaslighting.

If that part of the conversation wasn’t enough to seal the deal, then the next part certainly hammers it home.

When Becky and Elly questioned Pascal on whether or not he had said that Channel 10 could have cast hotter chicks as the Bachelorette, he simply responded with:  “Are you guys trying to create drama from nowhere?”

Belittling their argument and undermining their authority. Another classic gaslighting technique.

“It’s time for you to leave,” says Becky - calling it a day on this nonsense.

But before Becky even finishes her sentence, Pascal swipes in by saying, “I’m going home,” and therefore claiming the departure was his decision.

“It’s utter bulls**t, in every sense of the word. What a crock of s**t. I look like a d**khead,” Pascal states while getting into the limo.

While we understand that reality television is edited to extreme levels, so what we saw Pascal do on screen may not be a reflection of the true events, we want it to be known that if a situation plays out exactly like this in yours, or your friends, or your family member’s real life that this is gaslighting.

A form of psychological abuse that undermines the victim and manipulates them into believing a false truth, or that they are in the wrong - making them feel like the ‘bad guy’ and that they should be apologising to the real perpetrator.

So if you spot these signs, please don’t ignore them and seek the help you (or your friend or family member) deserve.

Now watch the Mamamia Outloud team explain Gaslighting and how to know if it’s happening to you.

Reply
Upvote
3 upvotes
So, according to the other story, none of this was gaslighting and he was more or less in the right?
The only thing that was maybe gaslighting was when he quit half way through being fired, but he had already planned to do that anyway.
Reality TV, not real..... shocking.
News
General
Opinion
True Crime
Politics
Sport
Explainer
Entertainment
Celebrity
Reality TV
Movies
TV
Books
Rogue
Royal
Lifestyle
Beauty
Fashion
Weddings
Home
Wellness
Health
Fitness
Travel
Food
Parents
Before The Bump
Pregnancy
Baby
Kids
Teens
School
Parent Opinion
Work & Money
Money
Finance
Career
Lady Startup
Relationships
Sex
Dating
Separation
Friendship
Family
Real Life
Couples