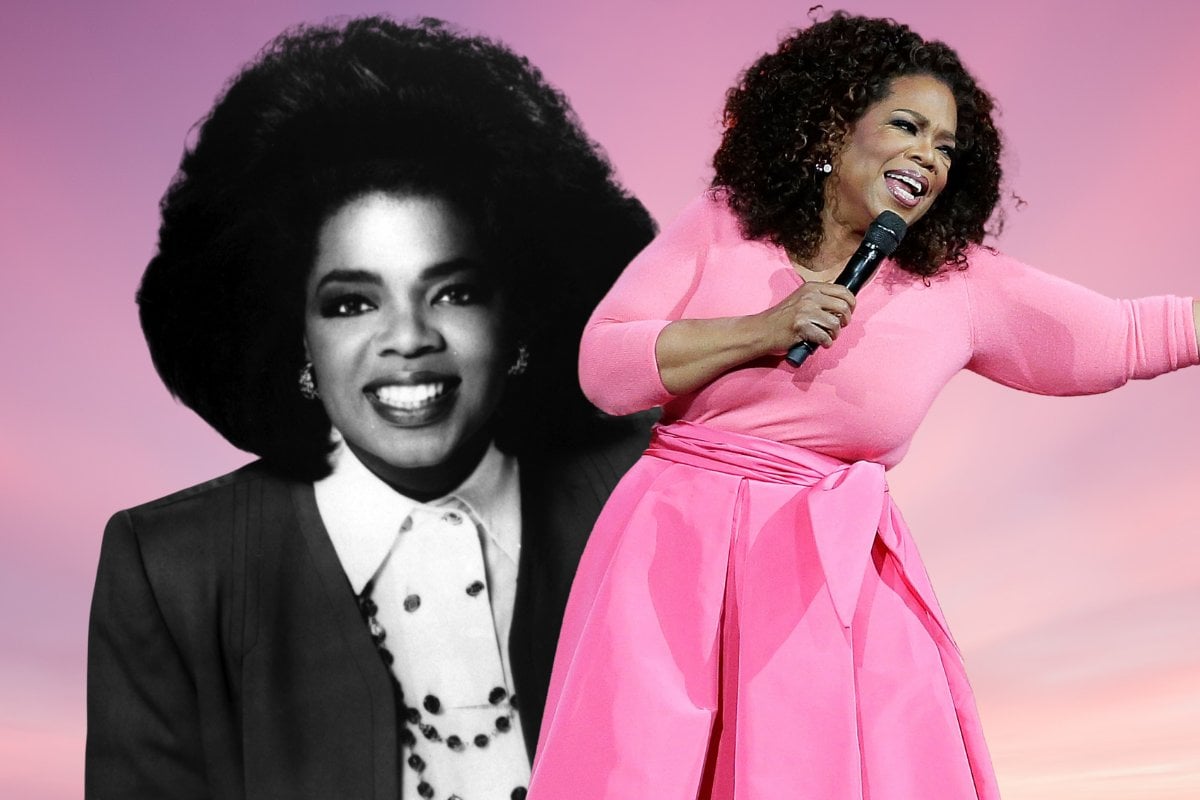 When Oprah Winfrey interviewed Meghan Markle this week, one thing was clear – the 67-year-old media icon was just as captivating as her guest. For some, even more so.

Social media was flooded with praise for Oprah’s interviewing style, and ability to extract detail from a couple who had a lot of secrets.

One could say it’s because Oprah has been doing this for almost 50 years. She’s interviewed thousands of guests – many high-profile celebrities - has six book titles to her name, and has been on screen since she was 19 on an early morning news program in Baltimore.

But really, it’s Oprah’s unconventional life story that has provided her with insight, and ability to empathise with a wide range of people, to produce exceptional story-telling.

Watch the trailer for Oprah's tell-all interview with Meghan and Harry. Post continues below.

It takes an extraordinary person to achieve these things – someone who’s ambitious and determined to change the world.

This is a look how Oprah came to be, and why she still reigns supreme.

A post shared by O, The Oprah Magazine (@oprahmagazine)

She was born in Mississippi in 1954, and given the Biblical name Orpah, but it was too difficult for many to pronounce – and so she became known as Oprah.

(Interestingly, her production company years later would be called Harpo – the reverse of her name. Harpo was also the name of the husband of Sofia – played by Oprah -  in The Colour Purple, a role for which Oprah won a Best Supporting Actress Oscar nomination in 1985.)

Oprah’s parents, Vernita and Vernon, did not remain together after her birth. Vernita moved cities for work, and Oprah moved in with her grandmother, living in poverty.

Her grandmother was apparently cruel with discipline, but instilled in her granddaughter a life-long love of reading.

Nevertheless, the highest expectation of Oprah was to find a decent white family to work for, which required no education at all.

Dressed in a modified potato sack dress sewn by her grandmother, Oprah knew she wanted more. Her childhood nickname was “Sack Girl” but Oprah was to determined to be – and give – much more.

In an essay on Oprah.com, she recalled, “A still, small voice inside me, really more a feeling than a voice, said, 'This will not be your life. Your life will be more than hanging clothes on a line'."

At six, Oprah joined her mother in Milwaukee, but Vernita couldn’t cope with Oprah, as well as her subsequent daughter, Patricia. Oprah was thus sent to live with her father in Nashville – who believed education was important and encouraged his daughter to excel at school. She would go on to win a scholarship to Tennessee State University.

But true to form, she dropped out after one year to pursue her true passion – the media.

At 17, Oprah also entered the Miss Black Tennessee Beauty Pageant in 1971 – and won.

In the meantime, Vernita gave birth to another daughter, also named Patricia. This second half-sister was unknown to Oprah until 2010, as she was adopted at birth.

In an Oprah Where Are They Now special in 2013, Oprah said of her youngest sister, “I think she’s a remarkable human being” for enduring what she has.

The sisters became close, forming a genuine sister bond, with Oprah even taking Patricia to the Academy Awards in 2011.

Oprah also had a brother, Jeffrey, who died of AIDS-related causes. Her older sister Patricia died from addiction.

Oprah’s childhood and teens were also rife with sexual abuse.

On an episode of The Oprah Winfrey Show in 1986, Oprah revealed to the audience that she had been raped aged nine by a relative, and then further relatives, and that her family did not believe her at the time.

Later, after running away from home aged 14, Oprah became pregnant, but her son died in infancy. It wouldn’t be until 2015, in Melbourne, during a speaking tour, that Oprah would reveal the name of her son, whom she had never been able to bring home.

"So I have named him, I had a little boy named Canaan," she announced.

"I did have a son. And I named him Canaan because Canaan means 'new land, new life'."

But in a 2011 interview with Piers Morgan, Oprah was apparently able to be pragmatic.

"I went back to school, and nobody knew," she said.

"Because had anybody known at that time, I wouldn't have been able to be head of student council.

"I wouldn't have been chosen as one of the two teenagers in the state of Tennessee to go to the White House conference on youth. None of those things would have happened, and the entire trajectory of my life would have been different."

It was a reason that Oprah decided to not have further children. Instead, she’s focussed much of her career on children’s education by supporting the work of American teachers, and opening Oprah Winfrey Leadership Academy for Girls in South Africa in 2007.

“I know what it feels like to not be wanted… you can use it as a stepping stone to build great empathy for people,” Oprah told David Letterman in 2018.

“Everybody has a story and your story is as equally as valuable and important as my story.

“My story just helped define and shape me as does everybody’s story.”

It’s this wealth of experience – and trauma – that made Oprah so good at her job of interviewing people. By 1983, Oprah moved to Chicago to host The Oprah Winfrey Show.

It was aired from 1986 to 2011, and was the most successful American talk show ever. In those 25 years, the main themes of Oprah’s work were many, and varied.

Despite being known for her flashy Christmas giving shows, and her 2004 Pontiac car giveaway to her entire audience, Oprah has opened and changed conversations on topics such as child sexual abuse, AIDS, grief, sexual identity and race.

By having guests with lived experiences in these areas, Oprah helped destroy taboos, and educate her massive audience. But most importantly, her show gave a voice to many people who were marginalised, or silenced.

Since The Oprah Winfrey Show, Oprah has continued to educate and inspire in various forms, such as speaking tours, shows on her television network OWN, Super Soul Sundays, and The Oprah Conversation series on Apple TV.

As her career developed, Oprah became widely recognised as the most powerful person in media, and remains so to this day.

It’s meant she’s made some powerful friends such as the Obamas, esteemed authors Maya Angelou and Toni Morrison, Serena Williams, Will Smith and Jada Pinkett-Smith, and more recently, the Duke and Duchess of Sussex.

Apart from Oprah’s personal philanthropy, she’s also helped launch the careers of others such as Dr Phil, Dr Oz, and her own best friend, Gayle King.

Their successes are a testament to Oprah’s generosity – and to her influence.

Oprah has many times attributed her continuing success to the two closest people in her life, her long-term partner Steadman Graham, and her best friend, Gayle King.

The 70-year-old businessman, Graham, met Oprah at a charity event in 1986. The long-term couple has been famously private about their relationship or years – before social media made it possible for them to control their own narrative.

Oprah has explained her decision to share a “spiritual partnership” with Graham, even after he proposed to her in 1993.

“The moment after I said yes to his proposal, I had doubts,” the billionaire wrote in O magazine in 2020.

“I realised I didn't actually want a marriage. I wanted to be asked. I wanted to know he felt I was worthy of being his missus, but I didn't want the sacrifices, the compromises, the day-in-day-out commitment required to make a marriage work. My life with the show was my priority, and we both knew it.”

“He and I agree that had we tied the marital knot, we would not still be together.”

In contrast to the seen but mostly low-profile Graham, Oprah’s best friend of more than 40 years, Gayle King, has publicly been a significant feature in Oprah’s life.

The friends are so close, some have even questioned whether their relationship is something more. And it is – it’s the most special and unique of female friendships.

In a 2019 Instagram post, Oprah said, “I can’t tell you how many times people have introduced me to their best friends as, “She’s my Gayle”. The reason our friendship has worked for over 40 years, without arguments or fallouts, is that we’ve always been happy with our own lives.

“A true friend can’t be jealous of you, or want to take advantage of you in any way. Ever since we met in 1976, we’ve been doing the same thing. Listening. Talking. Laughing (a lot). Building dreams. Cheering. Being a shoulder to cry on. Speaking the truth. Being the truth.”

Oprah became the first-ever Black billionaire in North America in 2003, a truly remarkable achievement. Oprah is now worth approximately $3.5 billion.