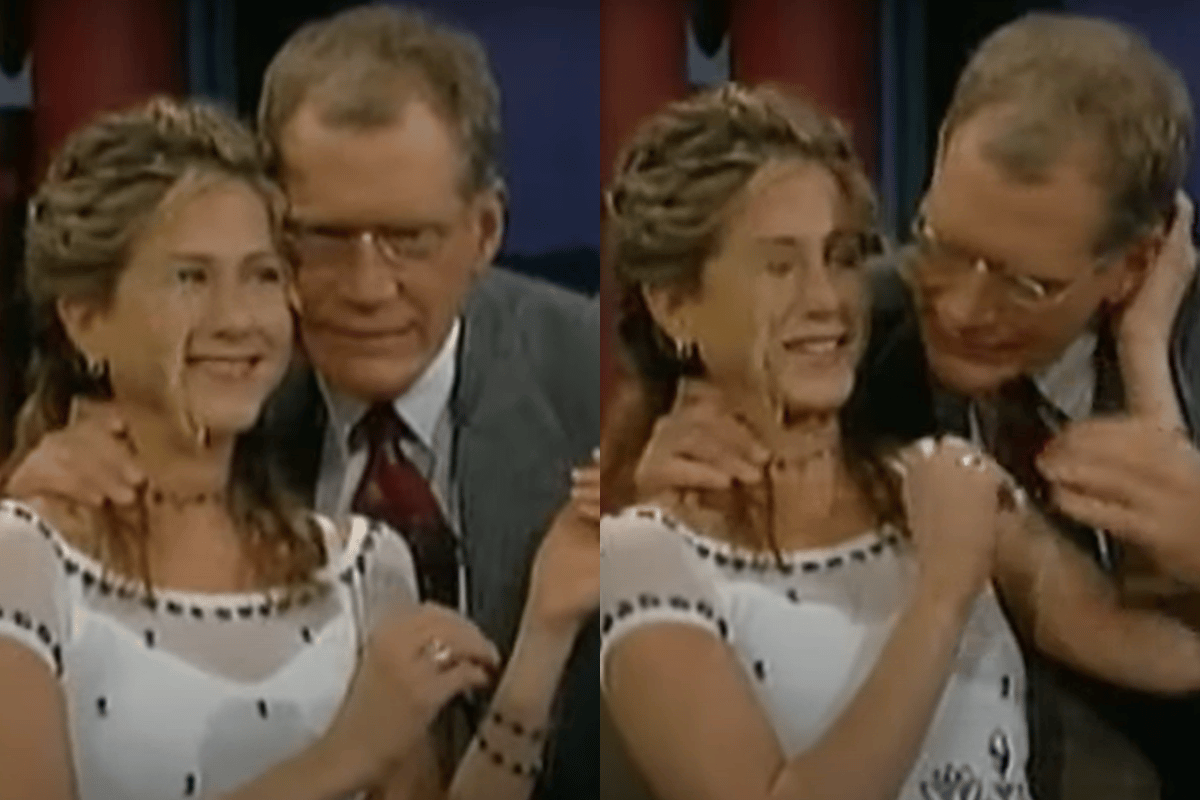 Amid the release of the documentary Framing Britney Spears, the world is looking retrospectively at the media with a brand new lens.

The new documentary, which was created as an edition of The New York Times Presents series, has sparked a social media reckoning over how young famous women have been treated by the tabloid media and the paparazzi.

In Britney Spears' case, the media's treatment of the singer is retrospectively being seen as highly invasive, sexist and insensitive.

Watch a clip from Lindsay Lohan's appearance on The Late Show With David Letterman below. Post continues after video.

Throughout the documentary, Spears was seen facing invasive questioning from a number of interviewers.

In one clip, Spears, just 10 years old, was asked whether she had a boyfriend. When the pre-teen replied, "No, they're mean," the middle-aged host suggested that he could be her boyfriend.

In another clip, Spears, 17, was told that "everyone's talking" about "her breasts". In another, she was asked if she was a virgin.

For many, looking back on the old interviews came as a shock. But as more interviews come to light, it's clear that Britney Spears wasn't the only celebrity thrusted into uncomfortable moments on screen.

Why is everyone talking about David Letterman?

Read: Lindsay Lohan was interviewed by David Letterman in 2013. It's horrifying to watch now.

At the time, Lohan, 27, appeared on The Late Show to promote her upcoming project, Scary Movie 5, ahead of a 90-day court-appointed rehab visit.

While the interview started well, Letterman soon moved on to the subject of rehab.

This Lindsay Lohan interview on David Letterman in 2013 is horrifying to watch now. pic.twitter.com/lZxKVvbVB0

"Aren’t you supposed to be in rehab now?" the host asked.

"Do you not watch anything that goes on?" Lohan responded. "What are you, a tabloid now?"

In the clip, the actress appeared visibly uncomfortable, while Letterman continued to probe.

"What are they rehab-ing, first of all? What is on their list? What are they going to work on when you walk through the door?" Letterman continued, as the studio audience laughed.

"We didn't discuss this in the pre-interview," Lohan responded.

"I think, to be honest, I'm happiest when I'm working and the healthiest and I think this is an opportunity for me to focus on what I love and I don't think it's a bad thing, I think it's a blessing."

Letterman then bluntly asked: "Do you have addiction problems?"

As the host continued, Lohan reminded him that she was there to promote her film. But Letterman didn't let up.

"You can't make a joke of it," Lohan told him, refusing to answer more questions about rehab. "That's so mean."

Since the clip went viral on Twitter, a number of interviews from David Letterman's former talk show have resurfaced.

In one resurfaced interview from 1998, Letterman was seen sucking on Jennifer Aniston's hair like a strand of spaghetti.

"Forgive me if this is rude, I just want to try one thing," he said, before leaning in to Aniston with his tongue out.

"What are you doing?!" Aniston exclaimed.

Afterwards, Letterman offered Aniston a tissue to wipe her wet strand of hair.

"I'm sorry," he said as the audience laughed.

since we’re talking about david letterman being awful.. is anyone ever going to address this? pic.twitter.com/ZU5wIpsTFg

In another resurfaced interview from 1994, Letterman attempted to pressure Madonna to kiss a man in the audience.

When the singer refused, Letterman responded: "A lot of people would cave into the pressure and say, 'Oh alright', and go out and get it over with."

Since the #framingbritney doc came out, a number of videos have circulated of women being harassed in public or on national TV by men that we let get away with & caused life problems for these women. Here is Paris Hilton on David Letterman’s talk show to promote her perfume. pic.twitter.com/Fe8cmszd9m

Similarly to Lindsay Lohan, Paris Hilton was grilled by Letterman when she appeared on The Late Show in 2007.

During her appearance on the show, Letterman continually questioned Hilton about her time in jail after a reckless driving incident.

"Wasn't that horrible?" he asked. "What was your experience?"

"Obviously it was a very traumatic experience," Hilton, who appeared visibly uncomfortable, responded.

Afterwards, Letterman continued to ask Hilton endless questions about her time in prison.

"I’ve moved on with my life so I don’t really want to talk about it anymore," Hilton awkwardly replied.

"This is where you and I are different because this all I want to talk about," Letterman said. "So, did you make any friends when you were in there?"

Hilton responded: "I'm not asking anymore questions about that. I'm here for my clothing line and my movie and my perfume. I'm not here to talk about that."

How has the internet responded?

As the interviews continue to surface, some viewers are calling for David Letterman to apologise.

This is vile on so many levels. The misogyny. The blindsiding. The stigma of addiction & rehab. The hypocrisy of wanting people to recover, but then judging how they choose do so. I hope Lindsay Lohan knows how loved she is. The world has treated her and many others so unfairly.

"This is vile on so many levels. The misogyny. The blindsiding. The stigma of addiction and rehab. The hypocrisy of wanting people to recover, but then judging how they choose to do so. I hope Lindsay Lohan knows how loved she is," one Twitter user wrote.

"This makes me feel sick. It's so dehumanising," another said.

"He really enjoyed asking women inappropriate questions and watching them squirm while the audience laughed," another commented.

At the time of publishing, Letterman hasn't responded to the resurfaced interviews. However, the former late show host has long been criticised for being "too mean" to his guests.

"I always felt like we got 500 people in the audience and it's my responsibility to get a laugh. Many times, the laugh would come at the expense of the guest. I regret that now, but at the time you think, 'I've got to do anything to keep my head above water'," Letterman told Vulture.

"I was so single-minded in getting through the hour, and sarcasm is so easy. The quote is 'Sarcasm is the lowest form of wit'. If you can't think of something funny, say something sarcastic. That worked and also got me in a lot of trouble," he continued.

"People would accuse me of being mean. Well, yes, sarcasm probably is mean; but on the other hand, I'm just trying to get a laugh, so leave me alone."

N
natedogg a year ago

Reply
Upvote
Please. Bringing up the past and start male bashing?  Why not do an article on Roseanne Barr or Joan Rivers or even Amy Schumer. All great comedians that have been known to  'male bash' the same to what Lettermen had done to his female guests. Can't cancel culture.
A
amymonty a year ago

Reply
Upvote
David Letterman has publicly come out as having been an alcoholic for most of his years as host of his show, which he no longer is.
IF he were to publicly apologise to each person he ever bullied/belittled/ridiculed or made uncomfortable on his show, he would have to write another autobiography to fit them all in there.
M
mamamia-user-482898552 a year ago