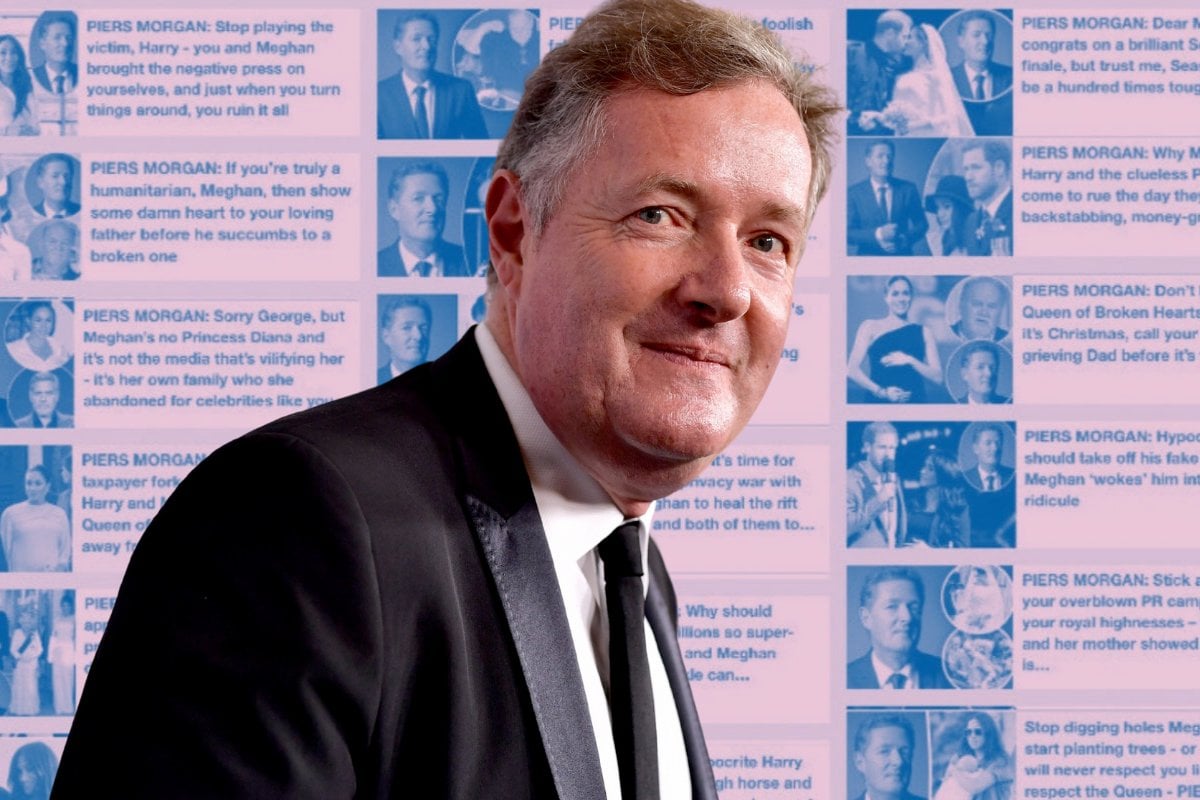 It's certainly been a big week for Piers Morgan.

"Following discussions with ITV, Piers Morgan has decided now is the time to leave Good Morning Britain," ITV said in a statement.

On Monday, Morgan disputed a number of Meghan's claims from the interview, including the Duchess of Sussex's admission that she went to Buckingham Palace for help after she started experiencing suicidal thoughts due to relentless criticism from the British tabloids.

"I'm sorry, I don't believe a word she said. I wouldn't believe it if she read me a weather report."

But after years of criticising Markle for just about anything – including her mental health struggles – it seems Morgan couldn't handle receiving his own dose of criticism.

"I understand that you don't like Meghan Markle," Beresford said.

"You've made that so clear a number of times on this program. A number of times. And I understand that you've got a personal relationship with Meghan Markle or had one and she cut you off. She's entitled to cut you off if she wants to. Has she said anything about you since she cut you off? I don't think she has, but yet you continue to trash her."

Piers Morgan, a small man who needs attention at all times, walks off the set of ITV's Good Morning Britain when he's called out by fellow presenter Alex Beresford.

"Sorry, can't do this," Morgan says as he walked off.
"This is absolutely diabolical behavior," Beresford says. pic.twitter.com/fhvTtKBEII

In response, Morgan stormed out of the studio.

"I’m sorry but Piers spouts off on a regular basis and we all have to sit there and listen."

For many years now, Morgan has endlessly criticised the Duchess of Sussex.

It all began during Meghan and Harry's early relationship.

At the time, Morgan was quick to sing the praises of Meghan, writing about his friendship with the Duchess in an article for the Daily Mail.

*NEW:
Our friendship started with this DM, and ended in a ruthless double ghosting.
Why I'm not surprised the Palace is already getting annoyed with Meghan Markle.
My column: https://t.co/Xt7qvP6DX7 pic.twitter.com/q64efU7g6V

But in 2018, the tide quickly turned when Morgan wasn't invited to the couple's royal wedding.

In December that year, Morgan spoke on Good Morning Britain, sharing that his friendship with Meghan "wasn't great" as he was "ghosted" by the former Suits actor.

"I’ve had my own experience with her, which was not great, to be honest," he said at the time.

"I knew her for about a year and a half. I got on really well with her and then bang, she met someone more important and immediately ghosted," he continued.

"I never heard from her ever again and the old slipper slope ladder had gone up and she social climbed her way out of my orbit. And everything I’ve seen since does slightly smack of an actress, a Hollywood actress, seizing her chance and acting her way to the top."

From that moment onwards, Morgan's public vendetta against Markle began as the broadcaster made little attempt to hide his contempt for the former actor.

In the years since, Morgan has written dozens upon dozens of vitriolic columns about Markle for the Daily Mail.

In one article published after the royal wedding, Morgan described the Duchess as a "ruthless social climbing actress who has landed the role of her life and is determined to milk it for all she can."

In another, Morgan called for the Queen to strip "deluded Meghan and Harry of their royal titles, before this pair of grasping, selfish, scheming Kardashian-wannabes bring down the monarchy".

And when Prince Harry released a statement against the media's reporting on Markle, Morgan suggested the couple deserved the negative attention, writing: "Stop playing the victim Harry – you and Meghan brought the negative press on yourselves, and just when you turn things around you ruin it all."

When you actually look at the sheer number of articles Piers Morgan has written about Meghan Markle, not to mention the malevolence and absolute venom behind them, it is crystal-clear that the man is deranged. pic.twitter.com/dAsZ9uHMTN

The motive for Piers' obsession with Meghan is pretty clear pic.twitter.com/aAhfWV8RAP

Long before his vendetta against Markle began, Morgan has been a controversial figure in the British media.

The journalist became the youngest national newspaper editor in more than half a century in 1994 when he was appointed editor of the News of the World by Rupert Murdoch. At the time, Morgan was just 28 years old.

He later became the editor of the Daily Mirror. While working for the left-leaning newspaper, the publication became implicated in Britain's news media phone hacking scandal as multiple British newspapers were accused of engaging in phone hacking and police bribery in pursuit of stories.

Although Morgan denied ever hacking a phone, an inquiry found "he was aware that it was taking place in the press as a whole and that he was sufficiently unembarrassed by what was criminal behaviour as he was prepared to joke about it".

Morgan was later sacked from the Daily Mirror after the newspaper published fake images that were alleged to show Iraqi prisoners being abused by British Army soldiers.

Following his time in print media, Morgan launched a television career, appearing as a judge on America's Got Talent and Britain's Got Talent, and winning The Celebrity Apprentice, where he met Donald Trump.

Since 2015, Morgan has hosted Good Morning Britain alongside Susanna Reid, and has written a popular column for the Daily Mail.

During his time on the show, Good Morning Britain has been the subject of thousands of complaints to the British media watchdog, Ofcom, relating to Morgan's offensive comments.

Listen to Mamamia's daily entertainment podcast, The Spill, below. Post continues after audio.

In 2019, Morgan identified himself as 'a penguin' in response to news related to gender neutrality, and in 2020, Morgan was accused of racism after mocking a Chinese dairy advertisement.

The television presenter has also been accused of sexualising his co-workers on Good Morning Britain.

"When a female presenter parades herself in skintight leather trousers to do the weather, you are going to get people going, 'Wow,'" he told presenter Laura Tobin on the show last year.

When he was later criticised for the comment online, Morgan responded: "If she is going to wear figure-hugging leather trousers I am going to notice. You deliberately wore them to get people to notice, all of you wear clothes hoping they will get noticed. If I call you hot, why is that offensive?"

This is pretty gross, @piersmorgan.

And that's just the tip of the iceberg.

Now that Morgan's time at Good Morning Britain is over, the television presenter is rumoured to be joining Fox News as the television network launches in the UK.