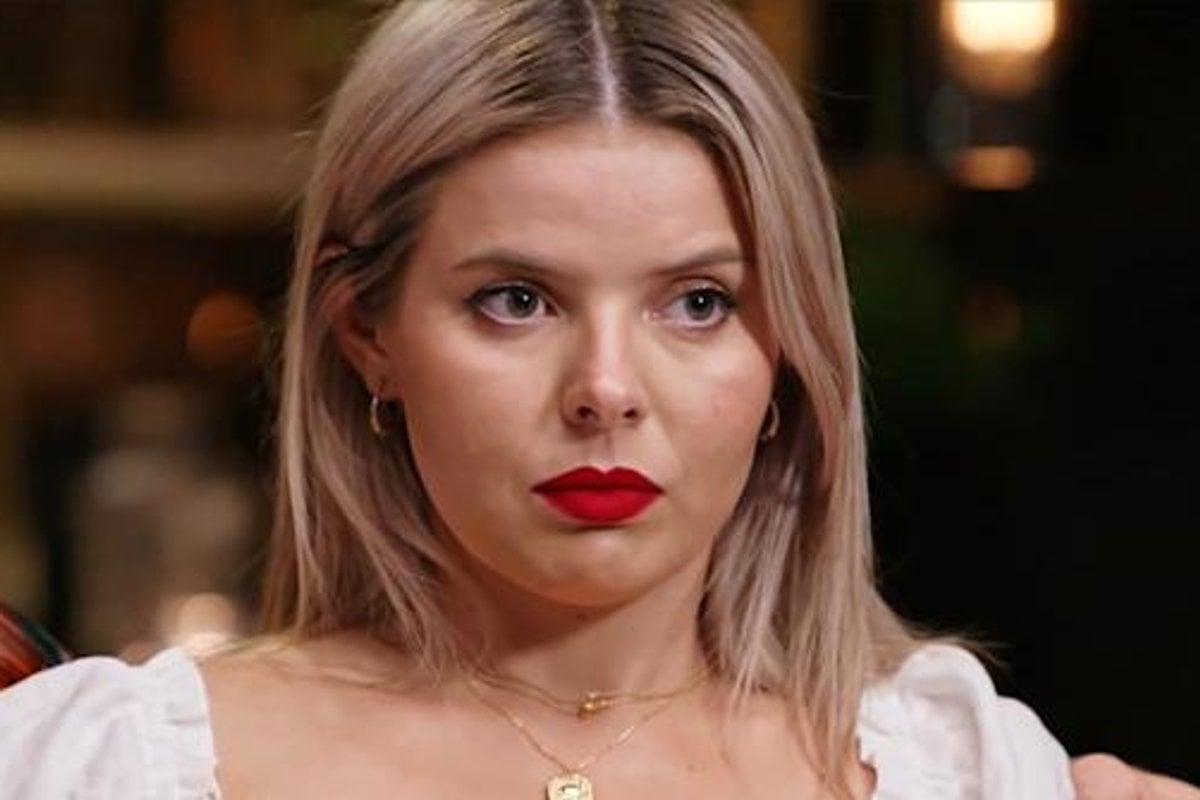 When 27-year-old teaching student Olivia Frazer filled out an application for Married At First Sight she likely didn't expect to be cast as the villain.

That's the way reality television works. One discovers they're the villain at the same time as one million odd viewers. And by then, of course, it's all too late.

Most of those viewers watch with a phone in hand. A phone that can, with just a few taps, connect them with the person they're watching on television.

For anyone who may have missed it, the defining feud of this season of Married At First Sight has unfolded between Olivia and Domenica Calarco. 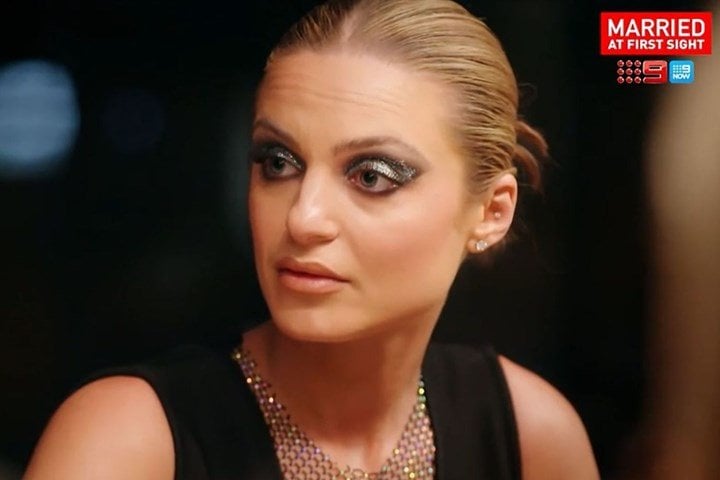 While Olivia's edit was favourable to begin with, the mood shifted when she announced Domenica was not the "queen bee" of the experiment. She criticised her for being opinionated and "loud", a judgement that is inevitably loaded when directed at a woman. Domenica is also Italian and was hurt by a remark she says has followed her for her whole life. The way the argument unfolded, it appeared Olivia had a problem with the sound of Domenica's voice, a quality one is unable to change.

In response to Olivia's insult, Domenica then smashed a wine glass. While absolutely an act of aggression, Olivia presented the incident as "assault" and hyperbolically described the moment as one where Domenica waved a broken glass in her face.

To be fair, that might have happened. It just was not what we saw on television.

That's when the nude photos were uncovered.

Olivia has presented two accounts - one where she Googled Domenica following the incident to try to determine what she was "dealing with". In front of the experts and other couples, however, Olivia claims it was a friend who stumbled across the images from Domenica's OnlyFans account and shared them with her.

From there Olivia circulated the explicit images of Domenica, which previously had only existed behind a paywall, to virtually every couple in the experiment. The subject was then broached at a dinner party, meaning Domenica's naked body was now, whether she liked it or not, a central plot-point of the season.

On camera, Olivia has described herself as a "petty b*tch", who knows how to "hold a grudge", and "still hates girls from pre-school".

She has retold a story numerous times about being a friend's bridesmaid, and when the friend asked if she liked the dresses she'd picked out, Olivia said "I don't, I hate them. They're disgusting".

After being "fired" as a bridesmaid, Olivia cut the dress up into pieces and sent it back to the bride.

LISTEN: OK. We need to talk about Married At First Sight. Post continues below.

It's not just the contents of the story that has horrified viewers, but the pride with which she tells it. She has warned her husband Jackson that this is simply who she is, and the behaviour is unlikely to change.

When watching Olivia's character arc play out on screen, I had one thought, followed almost immediately by another.

The first was: This woman's behaviour is deplorable.

The second was: I hope she will be okay.

It has been interesting to watch former reality television contestants, of all people, "call out" Olivia's behaviour.

While what she did to Domenica is inexcusable, and by virtue of taking place on Australia's most popular reality television show, is absolutely up for public commentary, I wonder at what point enough is enough.

These reality TV stars were not so long ago themselves cast the villain. They have been outspoken about the mental health impact, the way they were unfairly edited, how music and chopping sentences together and an out of context three second grab made them into someone they weren't.

The argument for Olivia, and one I find hard to dispute, is that she said those things. In interviews since, she stands by them. Her inability to acknowledge that distributing naked photos of another woman - a woman you openly despise - is an act of malice, is infuriating. While she claims she has "no judgement" over what Domenica does with her body, the very choice to distribute the images tells us something different. She knew that sharing those pictures, intended for a private subscriber audience, would be damaging to Dom's reputation. That's why she did it.

The punishment surely outweighs the crime.

A petition was launched to have the matter of explicit material being shared without Domenica's consent brought to the eSafety commissioner. That petition received 123,934 signatures.

On the one hand, NSW police have commenced an investigation into the matter, after Domenica obtained legal advice.

On the other hand, that is more signatures than just about any change.org petition calling for an end to the war in Ukraine.

It is far more than most petitions about climate change, or flood recovery or granting Ukrainians visas to allow them to flee.

An additional petition has been started, calling for Olivia to be banned from teaching kids.

"I hope karma gets you," one popular Instagram comment read. "And you don't get employed teaching children... you need to get serious help before you shape children's minds."

The show has since wheeled Olivia out for the press rounds, where she was "confronted" by Kyle and Jackie O, before being "grilled" by Fitzy and Wippa. One pop culture website drew on the expertise of a psychologist to analyse Olivia's behaviour, as though any professional can assess an individual through the complex prism of highly edited reality television.

Olivia's behaviour was awkwardly likened at one point to that of infamous serial killer Ted Bundy, known to scholars as the epitome of a psychopath.

So we want Olivia criminally charged. We want her unable to work. And we think it reasonable to throw her in the same bucket as a man who gladly confessed to murdering 30 people.

And where is Olivia - the human being - in all this?

Comments have been turned off on her Instagram account. We can only imagine what sort of abuse - the very crime we're accusing her of - she was receiving. 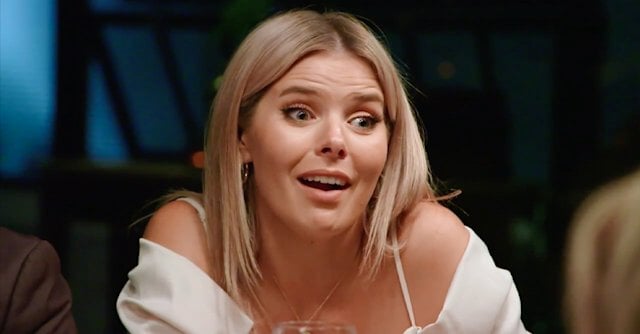 Photos of her as a teenager have been leaked and circulated, and she's had to shut down her private Facebook page due to the messages she was receiving.

How many times must we learn the same lessons?

That reality television is highly edited, and places real people in pressurised, exceptional situations, in order to have them behave badly.

That reality television requires a villain. If one cannot be found, producers will create one - no matter the cost.

And finally, that individuals who are being pilloried by a culture en masse are not okay. They're never okay. They suffer beyond what many of us could imagine, as we attempt to not only torture them in the present but eradicate their future.

What hope does a person have if we make future employment impossible? Or if we reduce them to a 'bad person' based on a few instances of bad behaviour?

In the midst of our indignation it is difficult to stop and consider what Olivia Frazer's life might look like right now.

She's a 27-year-old student, who spent most of her adult life nursing a sick father, who now sits beneath a savage internet pile on.

If we've tricked ourselves into thinking she will be fine and she knew what she was getting herself into, we're wrong.

Olivia, I'm willing to bet, is not fine.

I just hope she has the support not just of the people who love her, but professional support provided by the network who threw her to the wolves.

Because this is too much.

Reply
Upvote
Not o.k. just not o.k. whilst I have found the season at times very confronting and Olivia particularly - you are right. Perhaps in time Liv will come to reflect on her time on the show and begin to see things from a different perspective. But give the girl a chance. It's her journey. Judgement is one of those things that we suddenly begin to realise that when we choose it - we will create it. Let Liv learn these life lessons. There is something far more sinister in this. Judgement is a virus....let's stop spreading it.
S
simple simon 4 months ago

Reply
Upvote
What I find amusing about this: we hate on these reality show "villains" so much, but if on these shows everyone was always nice to everyone else, it would be boring and none of us would watch it.
Resources
Very Peri
News
General
Opinion
True Crime
Politics
Sport
Explainer
Entertainment
Celebrity
Reality TV
Movies
TV
Books
Rogue
Royal
Lifestyle
Beauty
Fashion
Weddings
Home
Wellness
Health
Fitness
Travel
Food
Family
Before The Bump
Pregnancy
Baby
Kids
Teens
School
Parent Opinion
Work & Money
Money
Finance
Career
Lady Startup