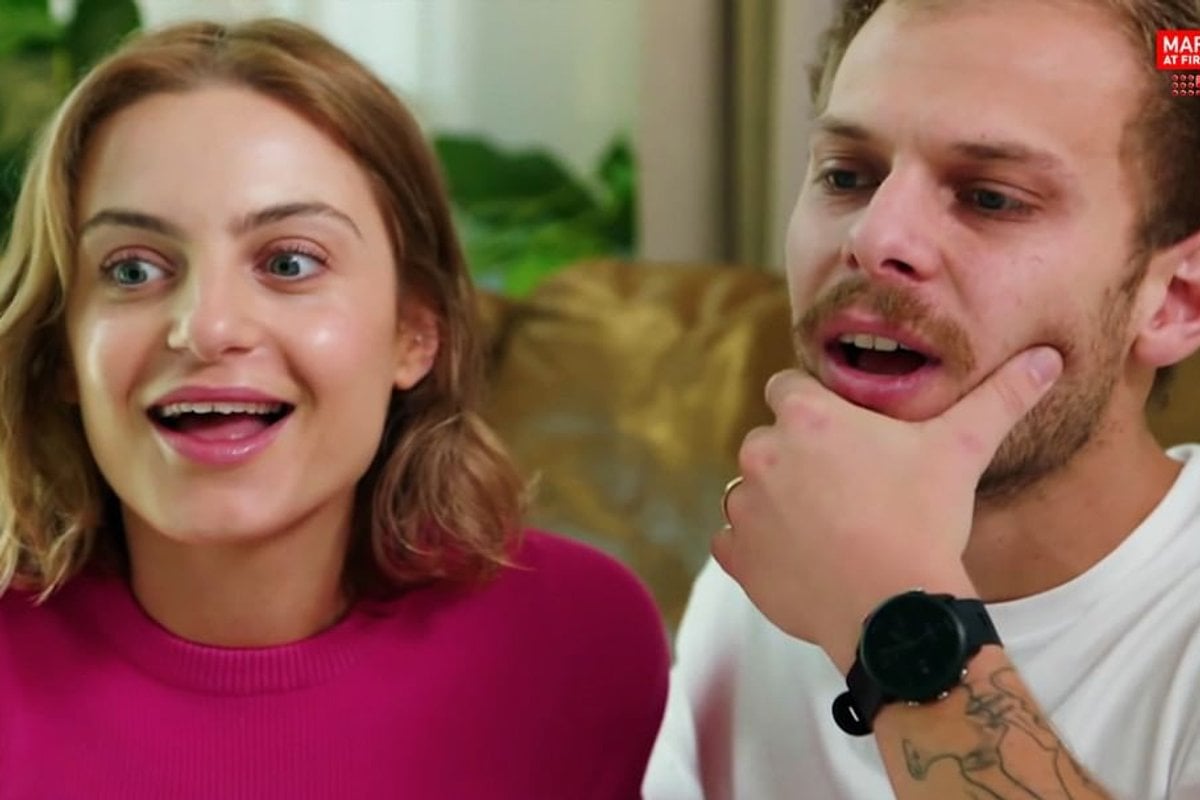 It's not every day we see a conversation about period sex broadcast on prime time national television, but alas, Married at First Sight is back for another year and with it have come some very ~intimate~ conversations.

Last week, we saw one particular discussion between couple Domenica Calarco and Jack Millar divide viewers completely: Should you have sex on your period? And moreover, do you?

Watch the trailer for Married at First Sight. Post continues below.

To recap: In Married at First Sight's "confessions week", Domenica asked her husband, Jack if he was avoiding having sex with her as she was on her period, and Jack confessed that he hadn't considered period sex before.

"It's a new ball game for me," he said before taking the topic to fellow grooms, Al Perkins and Jackson Lonie for their thoughts.

Al's first assumption was that Jack had backed off as girls get "moody and sh*t" (insert eye roll here) until Jack confirmed that it was definitely not that.

Only Jackson claimed he'd had period sex before, adding that "it's a big thing to get your head around."

From the discussion on the show, you might assume period sex was pretty rare. But, according to our Mamamia community, that couldn't be further from the truth.

READ: Chantelle Otten has 4 things she needs you to know about period sex.

Last year, Mamamia conducted a survey where over 1000 women let us in on the reality of their sex lives.

They answered questions on the amount of sexual partners they'd had, what their deepest fantasies were, and even what time they preferred to have sex.

But perhaps most notable were their responses to the question: Is sex on your period a dealbreaker?

22 per cent of women said that yes, period sex is a total no-go for them, while 40 per cent said it depends on what time of their cycle they are in, and 38 per cent said they didn't mind at all.

Interested in trying it for yourself? sex expert Chantelle Otten says to start slow.

"Anything that you do sexually starts as a bit of an experiment, usually because we’re not taught to have sexual confidence. We lack knowledge about what’s going on in our body and how it interacts with sex. It’s something that we have to try. Like anything new, it takes a little bit of anxiety and trial and error to get to a place of comfort," she wrote for Mamamia.

"Maybe you can have a lot more outercourse during your menstrual week, or other types of sexual activity that don’t involve going near the vulva area. You can explore sex toys, buy vibrators for different parts of your body, do nipple play, or focus on other erogenous zones, like the ears or chest.

"Remember, sex is what you make it."

Reply
Upvote
Too private for TV sorry.  This MAFS is a disgrace
H
hopey 3 months ago