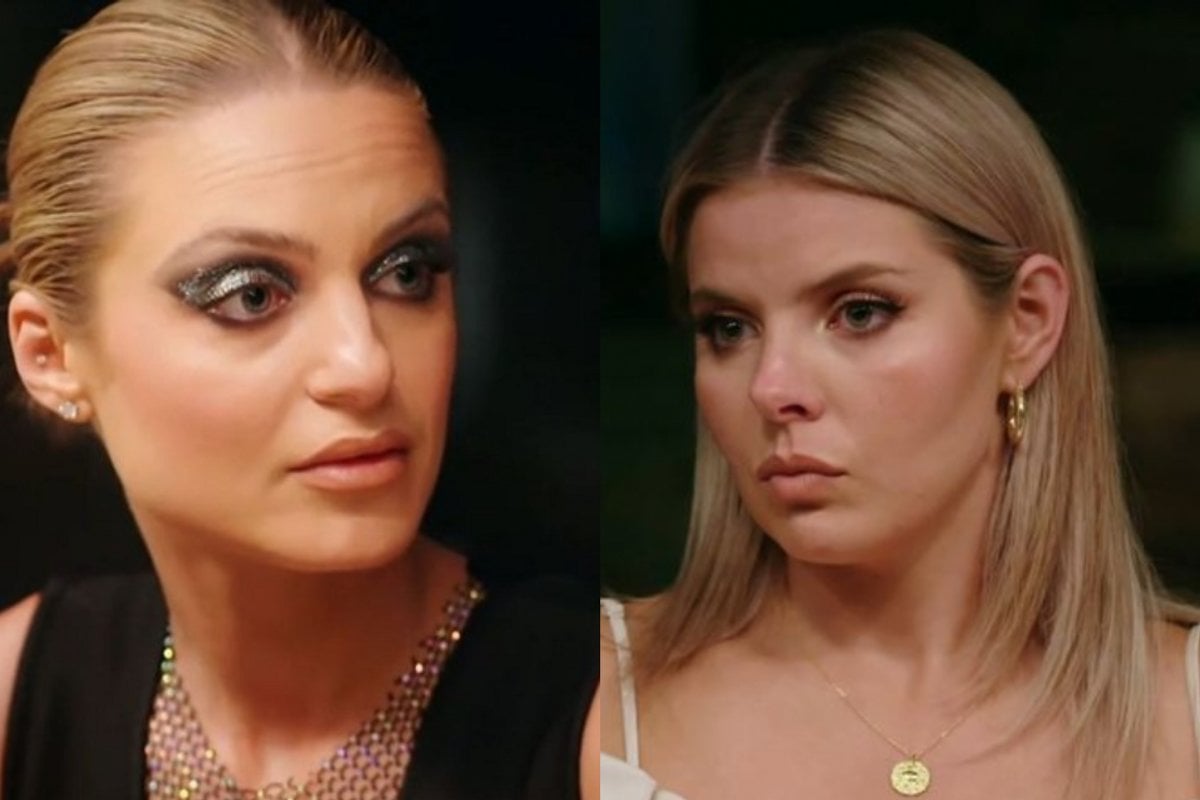 Well, this season of Married At First Sight has truly been a ride.

Perhaps unsurprisingly, over the past few weeks, we've seen some serious drama unfold, and we've also watched the season's early fan favourite - Olivia Frazer - turn into one of the show's most controversial contestants.

Ever since Domenica Calarco smashed a wine glass in response to Olivia's commentary on her voice basically everything has blown up with the group.

And it's seen the contestants being cruel, catty and slightly unhinged on the show.

Which brings us to Domenica's OnlyFans photo scandal.

Last night, we watched a particularly brutal storyline unfold on MAFS, where most contestants had viewed a naked photo of Domenica, prior to the dinner party.

And Domenica had no clue.

"If someone smashes a wineglass in your face, you google them," Olivia said, explaining how she found the photos.

"It's so easy to find. I have no idea who's seen it in the group, I just sent the photos through, so my bad, but I don't really care enough to double think it," she added.

The drama quickly unfolded when one of the boys told Domenica: "We've all seen an image of you, pretty much naked on the couch."

Here's everything that's happened since:

In an interview with 9Entertainment, Domenica spoke about yesterday's dinner party confrontation, calling it "disgusting".

"Sourcing an image and then circulating it to a group of people, that to me shows intent and malice, and if she [Olivia] can't see that, I don't know what the hell is wrong with her.

"The way I saw it, and the way I still see it to this day, is that it was done 100 per cent to cause me pain and to cause tension between Jack and I's relationship.

"For her to say that her friend sourced this image, because they wanted get some dirt on me after everything that happened, does that not sound like intent?" she added.

"It was really hard for me to sit there and have people tell me, 'because I put something on the internet, I deserve this or that I should've expected this'. That was really really hard to hear."

As for Sam's rather sl*t-shamey response, Domenica said she won't forgive her.

"[Sam] has come in all high and mighty about being a feminist, like 'f**k the patriarchy' throughout the entire experiment and she's sitting there telling me, 'Yeah, you put it out there so you kind of deserve it.'

"I will not forgive... The hurt will always be there because I now have to relive this."

Olivia told Nova's Fitzy and Wippa she was "completely blindsided" by the drama.

"I was completely blindsided by the whole photo thing," she said

"So it was when Tamara mentioned it at the cocktail party. I was just like... it was a drunken thing the night before we went to homestays, and the photo popped up on my phone.

"I was with a group of people. And like, I did the wrong thing. My judgment was very, very poor. And then I just never spoke or thought of it again... Then I arrive at the cocktail party and everybody's talking about the photo."

Fitzy interrupted to confirm whether it was Olivia or her friends who found the photo, to which she semi-evaded the question.

"Yeah, I said something like 'if somebody smashes a glass in your face you google them.' I don't know why I said that. But it doesn't matter. Look, the photo came up and I don’t know…"

He asked if the 27-year-old regretted sharing the photo with the group, and Olivia said she "didn't see what was wrong with it until recently".

"I regretted it at the time. I definitely didn't see what was wrong with it until recently because I just thought 'it's on the internet'. Like, it was advertised on several platforms. So I didn't really think it was some salacious secret.

"I definitely didn't think that it was some sort of revenge or leverage that I had over Dominica. I literally just thought like, oh, like good on [her] making some extra cash. Like, that's fantastic."

“People were expecting a reaction, me going off at Dom or something like that,” he said of the group’s confrontation.

“I’ve seen much more at a beach, from every Australian ever. I just want to point out, I still haven’t seen this photo FYI,” he added.

“It was COVID, she was working in hospitality and makeup, which were both the two of the industries heaviest hit. She made extra income in the way she saw fit. Power to the people.”

MAFS bride Ella Ding has a few choice words for the nude photo incident, admitting she was "astonished" by Olivia's behaviour and the other bride's actions on the night.

In an interview with HIT FM’s Maz and Lakey, she says there were other brides who came to her and "wished" they had spoken up. "They all said it to me."

“That situation at the dinner party, that was their time to shine and again no one came forward before the dinner party," she told Maz Compton and Danny Lakey. "No one texted her. It was really just the way the group had handled it. That was probably what was most disappointing. No one really had her back again.”

In regards to Olivia's behaviour, she says it "astonished" her.

“I’ve just never met or seen — I’ve known a lot of women in my life — and honestly? It’s astonishing,” she explained before later adding: “It must be exhausting being Olivia. It’s easier to be nice!”

When asked if she believed it would be beneficial for both Olivia and Domenica to sit down with a counsellor and be taught how to treat other women, Ella came down hard in defence of her friend.

“Domenica can get along with a lot of women and she does own her stuff, and she does apologise when she’s wrong and takes accountability,” she said.

“But Olivia has only just continued — in the season, you’ll see throughout — she just continues to find things.

“She said this herself, she holds grudges with people in pre-school. This isn’t on Dom. She’s tried to take that step forward. She says hi, she does everything that she’s comfortable with, but Olivia just continues to do the snide comments – like, ‘if you go missing we won’t send a search party out'.”

Ella also criticised groomsman Cody for the "childish" decision to bring up Domenica's nude photo during the dinner party.

“It was childish. It was immature, and it was high school crap and, like I said, we all have choices. We get to choose how we handle situations. The way people handled it at the dinner party is immature.”

While Cody Bromley admitted he could have handled the nude photo situation better, he told Hit Network's Cliffo and Gabi that Domenica was "frustrating" to deal with.

When asked why he confronted her during the dinner party, he said: "I was like [I know this is] going to be an issue, [I thought that in order] to go home and get some sleep, we'd need to address it.

"But it was also very frustrating that it was revolving around Dom again. We finally had a chance to do our own home stays and enjoy our own space and then once we got back, there was just drama around Dom again."

Adding to this, Cody admitted there was little sympathy for Dom, who was at the centre of the drama.

"Dom is very provocative... and on the show all of us were getting frustrated with her shoving her nose in everyone's business. So at this point you see everyone's reaction. The sympathy isn't really there because we've seen how she stirs the pot for so long," he said.

"In hindsight, obviously, it wasn't the right thing to do."

In regards to watching how Olivia has become a clear villain on MAFS, Cody said he preferred her company over Domenica's.

"Liv is such a legend. Honestly, if most people had a conversation with Dom or Liv, they'd get on with Liv better."

In defence of Olivia's behaviour, the groom said: "It's because Liv and Dom didn't get along and I guess Liv didn't handle the situation as best as she could have. And I'm sure she regrets it."

"She's a really good chat, and she's so nurturing. Every time I see her, she asks how I am.. But she did really struggle to get along with Dom. I did as well. We butted heads quite a bit... Liv is being portrayed as a villain, I think everyone can see that."

Cody says he has since apologised to Domenica over bringing up the photograph during the dinner party.

"Obviously now I see why Dom is upset. I am sorry, I said that to her. It was a big talking point, and it was something the company had to address... It is creating a lot of awareness," he said.

Fans sign a petition calling on the eSafety Commissioner to take action against Olivia for image-based abuse.

Overnight, a change.org petition emerged calling on the eSafety Commissioner to take action against Olivia Frazer for image-based abuse.

According to the eSafety website, 'image-based abuse occurs when an intimate image or video is shared without the consent of the person pictured'.

At the time of publication, the petition has received just under 40,000 signatures, and the creator, Pete Joyce, updated those who signed the petition in the afternoon, saying:

"The E-Safety Commissioner's Office reached out on Twitter this morning and advised they 'can only investigate matters reported by the person affected or their nominated representative'. So Domenica will need to engage with them herself for an investigation to commence.

"... I've been fortunate enough to connect with Dom herself, and she's aware and supportive of this petition. She is currently in the process of obtaining legal advice, and has asked us to keep the petition and momentum going for the time being."