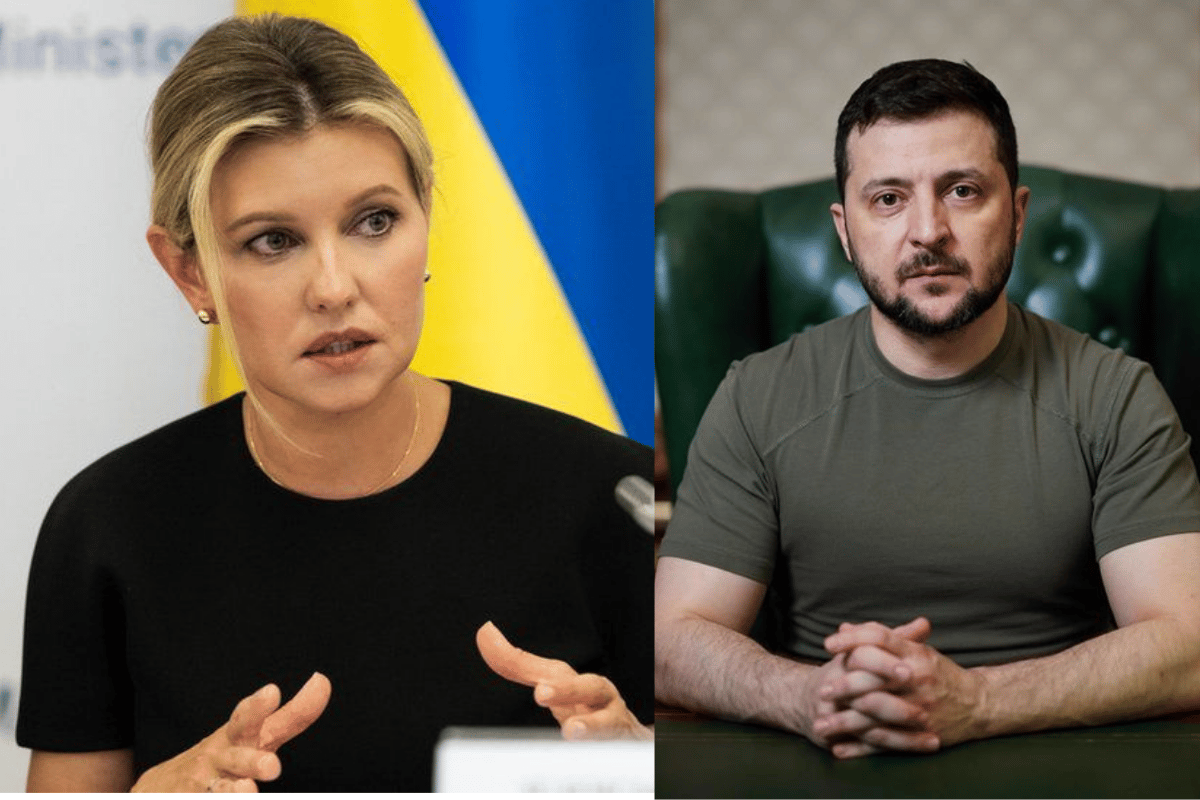 Ukraine's President Volodymyr Zelensky has been a figure of stoicism and defiance since Russian President Vladimir Putin ordered a "military operation in eastern Ukraine", igniting war.

Standing alongside Zelensky has been his wife - Olena Zelenska, the First Lady of Ukraine. And she has been using her platform to continue reminding the world of the atrocities occurring in Ukraine, calling for further support and for Russia to face consequences.

As she said this week - "Ukrainians were not preparing bomb shelters for missile attacks. But from the first days, after Russian missiles began hitting residential buildings in different cities, it became clear that Russia does not have mercy for peaceful lives. All Ukrainians stopped feeling safe."

And while Zelensky has become Putin's number one target, Olena has shared she always feared for her husband if he went into politics - for this reason exactly.

Olena Zelenska, maiden name Kiyashko, was born in 1978 in the Ukrainian city of Kryvyi Rih.

And just like her now-husband, Olena went to Kryvyi Rih National University, studying architecture and later the subject of creative and nonfiction writing. It was at university where Olena and Zelensky met.

Now qualified as an architect and screenwriter, Olena's writing skills were the perfect accompaniment to Zelensky's passion for comedy and acting. So while Zelensky was making a name for himself in the Ukrainian entertainment industry and starting his own production company, Olena played just as pivotal of a role.

The pair dated for over eight years before deciding to get married in 2003, and they have been together ever since.

In 2015, Zelensky became the star of the television comedy and political satire series, Servant of the People. Ironically, he played the role of the President of Ukraine. Zelensky's character was a high-school teacher who surprisingly wins the country's presidential election after a video of him ranting against the government and political corruption goes viral and catapults him to fame.

Olena was actually a professional scriptwriter on her husband's comedy show. And given their series was political satire, poking fun at the then-Ukrainian government's corruption scandals, it didn't go down well with the people in power at the time.

"Volodymyr is never going to be anybody's puppet. We had a famous scandal when Kolomoisky (the former governor of a province in Ukraine) cancelled a broadcast of our political stage show on his TV channel because of political jokes. Volodymyr called him on the phone and yelled so loudly that I thought we would never air our shows on TV again. That was the turning point when we defended our independence," Olena reflected in an interview with the Daily Beast.

It was during this time, that Zelensky felt the need to change the political system, according to Olena.

"We satirists used to joke about all public figures non-stop. Most politicians took our humour with dignity, the way it should be. But in the last five years authorities indicated 'the game is over'. That's when we decided to do something, to save our democracy. When TV channels one by one fell under the leadership's control, we realised if we didn't act, we'd end up in the same situation as Russia."

But interestingly, it was her husband's career path into politics that concerned Olena.

When Zelensky first voiced plans to pivot into politics, Olena was "aggressively opposed" to the idea, as she did not wish to live in the spotlight and the scrutiny that came with it. Not to mention, the couple now had two children who were growing up fast: daughter Oleksandra and son Kyrylo.

When asked what home life was now like after her husband became President, Olena told Vogue Ukraine in 2019 - "I do not have enough time alone with myself. I have got two kids, so I have rarely been alone before. I probably have had my only private space in the car, while driving. Now they have deprived me of this - I am always guarded. Now a bathroom is my only retreat (laughs). But I am lucky with people who are in my personal space now."

Amid the horrific situation in Ukraine, Olena and Zelensky's two children have been labelled major targets for Putin.

In a video statement, the Ukrainian President previous said - "The enemy has marked me down as the number one target. My family is the number two target. They want to destroy Ukraine politically by destroying the head of state. I will stay in the capital. My family is also in Ukraine."

Olena confirmed this, writing on Instagram - "I will not have panic and tears. I will be calm and confident. My children are looking at me. I will be next to them. And next to my husband. And with you."

She continued - "My dear people! Ukrainians! I'm looking at you all today. Everyone I see on TV, on the streets, on the Internet. I see your posts and videos. And you know what? You are incredible! I am proud to live with you in the same country!"

In a second statement at the start of the war, Olena who is with her children is at an undisclosed location in Ukraine, shared the story of just how real and raw this conflict is becoming for Ukrainian citizens.

"This child was born in the Kyiv bomb shelter. This was to take place in completely different conditions, under peaceful skies. It is what children should see. But the main thing is that despite the war, there were doctors and caring people on our streets next to her. She will be protected and defended. Because you are incredible, dear compatriots. We are the army, the army is us. And children born in bomb shelters will live in a peaceful country that has defended itself."

Last week, Olena spoke to Vogue about what it has been like to watch on as her country is pillaged in front of the world. And it was the earliest days of the invasion that are now seared in her mind.

"I remember the beginning very well. It was a normal working day - the children returning from school, the usual household chores, preparing for the next school day. But we had been tense. There had been a lot of talk everywhere, about a possible invasion."

She continued: "I woke up, sometime between 4 and 5am, because of a clunk. I didn't immediately realise it was an explosion. My husband wasn't in bed. But when I got up, I saw him at once, already dressed, in a suit as usual (this was the last time I'd see him in a suit and a white shirt - from then on it was military). 'It started.' That’s all he said."

Olena asked what she should do with their two kids, and he replied "Wait. I'll let you know. Just in case, gather essentials and documents." And he left the house.

And watching on in horror, Olena described her response to the war as both "personal and public" - an attack on her husband, her immediate family, her loved ones - and on the country she loves and its people.

In the profile, Olena also said she hasn't seen her husband since that day when he left their home in the suit. They have been in contact via phone ever since.

"I tried to optimistically answer [my kids'] questions, 'When will we see dad?' 'Soon'. In those first days, I hoped that we might be able to stay with him. But the president's office had become a military facility and my children and I were forbidden to stay there. We were ordered to move to a safe place - if, in Ukraine it is possible to find a safe place now…"

Since the invasion, Olena has been using her platform and social media to tell the stories of those who have shown incredible courage or sacrifice, including those who have been brutally killed by the Russian army.

But of course, Olena is human too. And just like every single Ukrainian, she fears for her family.

"I constantly worry about my husband and do everything to keep my children safe. About a week after the start of the war, I was phoning around to try to find out where my relatives were and whether they were alive. And in one moment, I realised that I didn't know if I would ever see them again - those I love, my beloved people! That was probably the first time I cried, the first time I let go of my emotions. I couldn't stand it."

As for what those who are watching on can do, Olena said it is important not to turn a blind eye - because the toll of this war is becoming greater every day.

"The main thing is not to get used to the war - not to turn it into statistics. Continue going to protests, continue to demand that your governments take action. Ukrainians are the same as you."

For more information on how you can help and donate, click here.

C
caz gibson a month ago

Reply
Upvote
Recently I found and shared a video of Olena and Volodymyr performing "Endless Love" on television.
They are totally capable satirical performers , writers, & dancers but they're also singers & musicians.
This quiet performance was equal to anything you'd see on any awards show - they're that good.
This also tells me that they're left-wing thinkers - not the ghastly Nazis that Putin accuses them to be.
Also Volodymyr is Jewish but not a religious zealot.
It pays to do some research and pay attention to your sources at this time.
P
pippa a month ago

Reply
Upvote
@caz gibson, can I just ask a question, please? Am I to understand that there is no ground between Nazism and left wing thinking? It’s not something that I normally mention, but I have a beautiful singing voice which I’ve had professionally trained. I’m not a left wing thinker. I’m a centrist. Both extremes of the political spectrum are anathema to me.
In my twenties, I was very much a left wing thinker. Common sense and scientific facts rule my life now. My singing voice has not improved or deteriorated with the change in my political views.
News
General
Opinion
True Crime
Politics
Sport
Explainer
Entertainment
Celebrity
Reality TV
Movies
TV
Books
Rogue
Royal
Lifestyle
Beauty
Fashion
Weddings
Home
Wellness
Health
Fitness
Travel
Food
Parents
Before The Bump
Pregnancy
Baby
Kids
Teens
School
Parent Opinion
Work & Money
Money
Finance
Career
Lady Startup
Relationships
Sex
Dating
Separation
Friendship
Family
Real Life
Couples