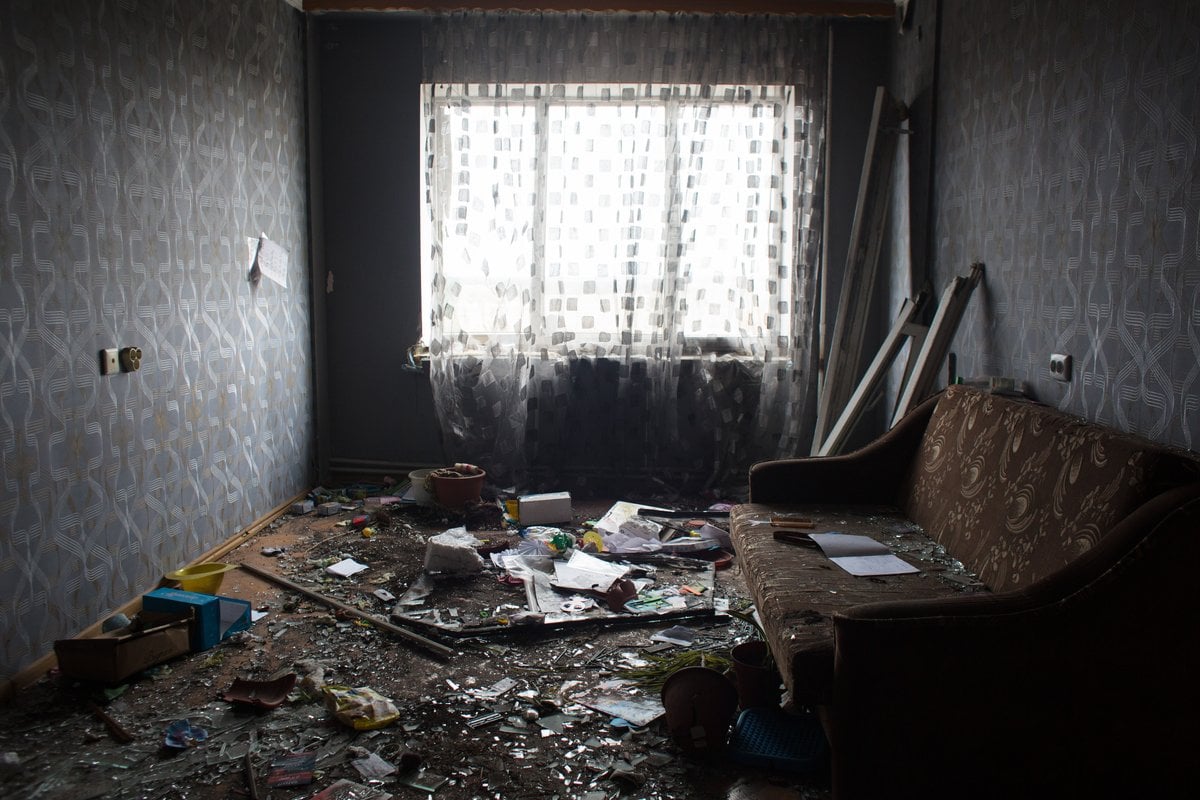 This post includes extreme violence, rape, murder and child abuse and could be triggering for some readers.

In the basement of a home in Bucha, not far from the capital of Ukraine, 25 women were held captive by Russian soldiers and systemically raped over many days.

Their abusers told them they would "rape them to the point where they wouldn't want sexual contact with any man, to prevent them from having Ukrainian children".

At least nine of those women and girls are reportedly now pregnant.

This is the latest horrific crime against women to come out of Ukraine, the country's ombudswoman for human rights, Lyudmyla Denisova, told the BBC.

WATCH: Ukraine's president has delivered a plea for more help from western forces.

The stories of abhorrent sexual violence are endless. There are hundreds of them.

On March 9, several soldiers are accused of entering the home of a young family living in a small village west of Kyiv.

The husband died trying to protect his wife and child, according to BBC.

She was then repeatedly raped by two soldiers who threatened to harm her young son if she didn't comply. They came back three times to assault her, before shooting the family dogs and burning the house down.

A 25-year-old woman was reportedly forced to watch as her 16-year-old sister was raped in the street in front of her.

She said they were screaming, 'This will happen to every Nazi prostitute' as they raped her. 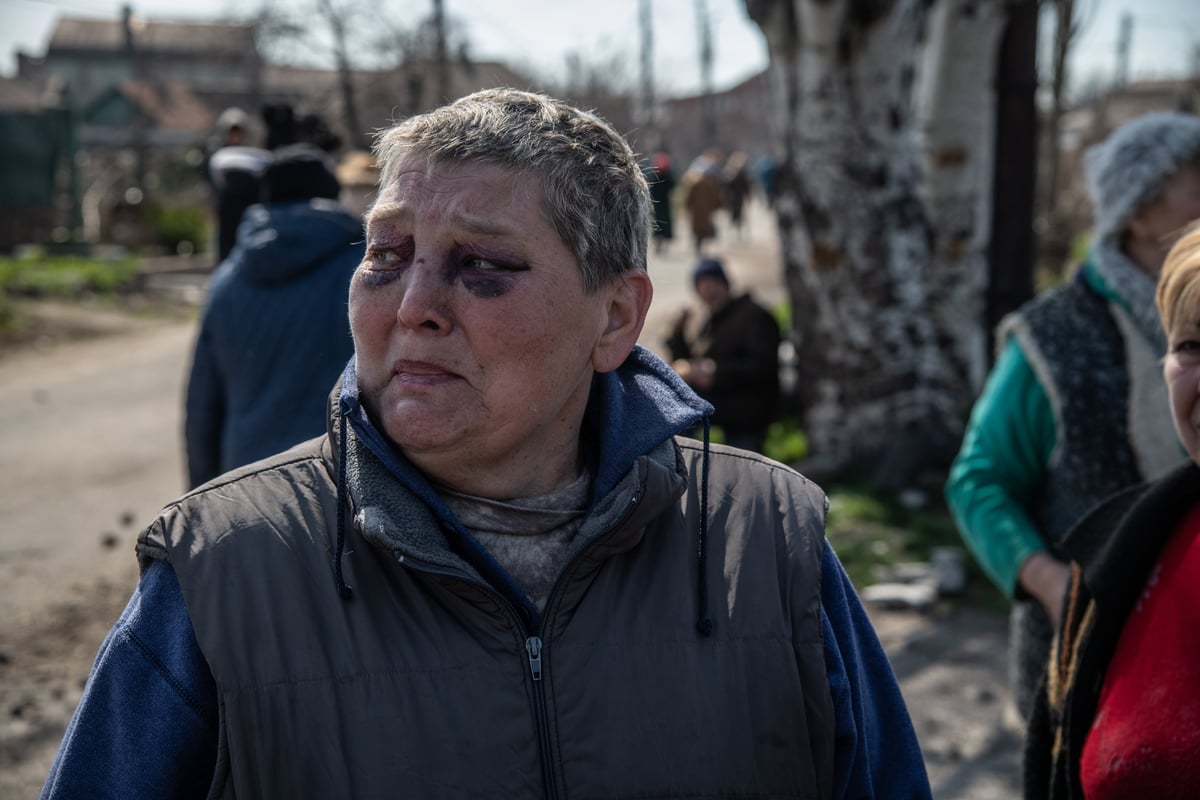 An 83-year-old retired schoolteacher called Vera told CBS she was raped in her house with her disabled husband in the next room.

"I asked [the soldier], 'What do you have against our government? We weren't the ones who started the war.' God, I wish I hadn't said that. I tempted fate. He said I was too smart... He said get up. I got up. He grabbed me by the back of the neck. He squeezed it. I started to choke. I couldn't breathe. He asked me who was in the house. I said only my sick old man, no one else… and then it started," she said.

"I wish he had killed me instead of what he did."

A woman in her 40s was allegedly raped and killed in the home of her neighbour who'd already fled the war.

The BBC reports bloodstains were left on the mattress and duvet and a note was left on a mirror in lipstick telling those who found her where she was buried.

The Sydney Morning Herald cites instances where a 14-year-old girl was raped by five men, and is now pregnant.

An 11-year-old boy was reportedly raped in front of his mother while she was tied to a chair, watching.

The stories are impossible to digest. But they're important for us to hear. Because these are the lesser told stories of war.

"Hundreds of cases of rape have been recorded, including those of young girls and very young children. Even of a baby," he told Lithuanian lawmakers via video link, as reported by NDTV.

Kira Rudyk, a member of Ukraine's Parliament, said sexual violence is "systematic in all the areas that were occupied by the Russians."

It might seem like a lesser crime in comparison to everything else happening in Ukraine right now. Thousands of civilians are among those being murdered, with women, children, and entire families being killed at the hands of Russian forces. Mass graves tell a story of horrific torture, and the bodies littered on suburban streets show many died at close range with their hands tied behind their backs.

All of it is horrific. All of it is currently being investigated and gathered as evidence of war crimes, with leaders around the world - including our own Prime Minister - in no doubt that Russia has violated the 'rules' of war. International humanitarian law exists to help maintain some humanity in armed conflicts; to save lives and reduce suffering where possible.

But that's not what's happening here, and there's a particular toll that women are bearing in this conflict, with extreme sexual violence being used as just another weapon in the fight against Ukraine.

It's not an uncommon accompaniment. The rape of women by soldiers during wartime has occurred throughout history, as a tool to punish, terrorise and destroy populations. Or even as a form of reward.

We do know that the stories currently making headlines are likely only "the tip of the iceberg," as Kateryna Cherepakha, president of La Strada-Ukraine, told the UN Security Council.

But it's not just that.

A maternity hospital has been bombed. A place sheltering labouring mothers.

A photo out of Mariupol made headlines around the world after a Russian bomb left patients and staff injured.

In it, a young woman clutches her swollen belly while being stretchered to safety.

Neither she nor her baby lived. 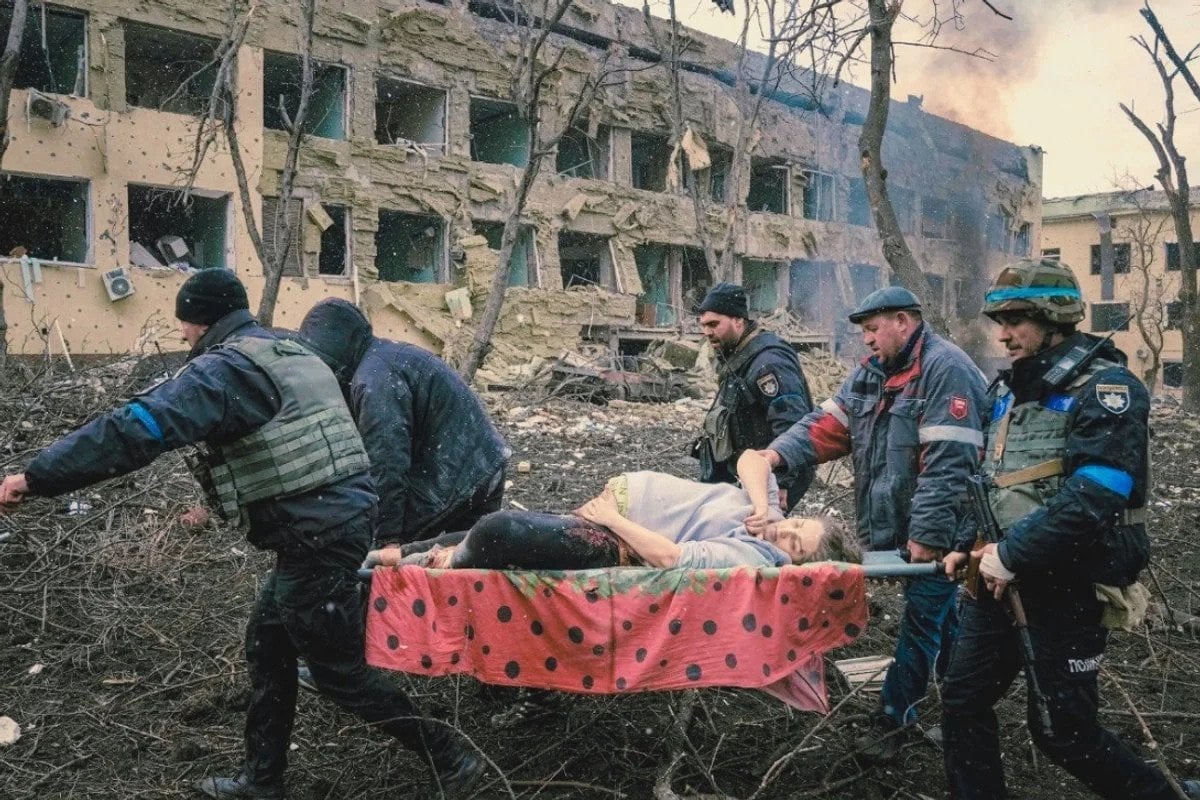 A photo that shows the brutality of war. A photo the world will not forgot. Image: AAP/AP Photo/Evgeniy Maloletka.

The ABC reports Russians are attacking schools too. At least 20 a day.

Save the Children estimates at least 869 education facilities have been damaged.

The UN is following up reports of human trafficking of women and children in Ukraine, as they try to flee.

It's a trend they've already witnessed in other conflict areas such as Syria, Iraq, Afghanistan and Myanmar, as traffickers take advantage of displaced, terrified people.

The Conversation reports perpetrators and traffickers have tried to exploit Ukrainian refugees by confiscating IDs, demanding labour or sexual services, or targeting help only to young women.

But in the heat of war, a lot of these tales become secondary. That's what happens when so much atrocity is happening all at once.

These gender-based and child-based crimes are happening on the sidelines of the war.

They exist parallel to the bloodshed and the bombs.

These are the horrific consequences reserved for just them; for the women and children of war.

Feature image: A view of a destroyed flat on April 13, 2022 in Borodianka, Ukraine. Rescue workers are still removing rubble from the destroyed residential area after the withdrawal of Russian troops during their invasion of Ukraine. Photo by Anastasia Vlasova/Getty Images.

Reply
Upvote
Women & children always suffer so much in these situations. It is abhorrent & terrifying.
B
brig a month ago